As Saudi Arabia opens up to travellers, with the announcement of a new tourist visa scheme, we explore what there is to do in this unexplored country...

On 28 September 2019, Saudi Arabia announced a new visa scheme. Once, it was only accessible to businessmen, a few group tours and pilgrims. Now, travellers from 49 countries (including the UK) can get tourist visas.

The visa announcement also comes with the news that Saudi Arabia's strict dress requirements for women visiting the country (an abaya) will be relaxed slightly, though women will still be expected to wear modest clothing. Women will also be permitted to travel the country solo, without male companionship.

What the Saudi Arabia visa announcement means for travellers 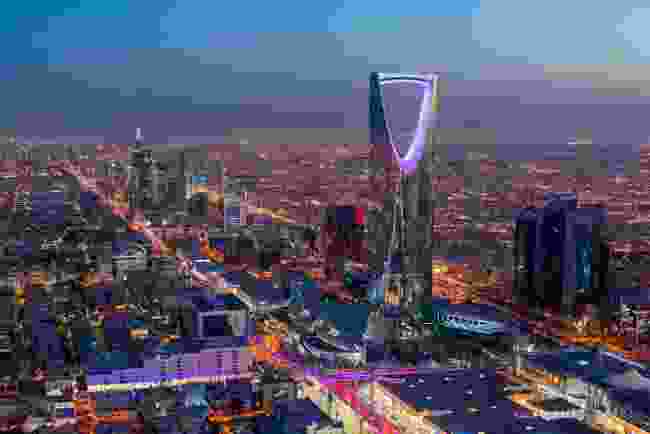 Though non-muslim visitors are unable to visit the religious cities of Medina and Mecca, this could be the chance to see a nation open up before your eyes—one with a history that encompasses whole civilisations being swallowed up in its sands.

Saudi Arabia stretches from coral seas and vast escarpments to lush oases and ancient cities. It’s a land of adventures, stories and remote mountain villages. So, where to start?

We've compiled five key sights and regions to explore, plus a few alternatives for those who’d rather go even further off the beaten track.

Here are a few ways to explore Saudi Arabia... 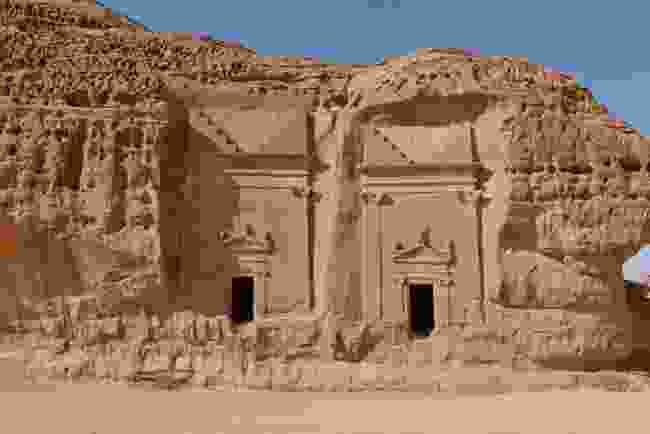 Most travellers know Petra, Jordan’s rock-carved city. But the trading empire of the Nabataeans, who built it, was huge. Few may have heard of Mada’in Saleh, but this spice-route city, high in Saudi Arabia’s north-west, is no less dramatic.

Of course, it met the same fate as the rest of the Nabataean empire. Like Petra, it was absorbed by the Romans in 106 AD and faded into history.

Yet its story didn’t end there. What survives is remarkably well preserved, largely made up of 131 rock-carved tombs covered in Aramaic script and scattered across the desert like lost messages in a bottle.

Some sites, such as Qasr al-Farid, take your breath away. Hewn into one giant, lone boulder, it remains unfinished, a snapshot of a civilisation stopped mid-sentence. Others are hidden down narrow siqs (gorges) or still half-excavated, making you feel like you’ve just discovered a lost city.

It’s an unforgettable sight. But visitors should note that Mada’in Saleh has been largely closed to visitors since late 2017. Reports are optimistic, however, that it’ll reopen before the end of 2019.

It was inhabited until the 1980s, then abandoned for the modern streets of ‘new Al Ula’. Now its ghostly remains crack and crumble under the desert sun.

2. Explore the old (and new) city of Jeddah 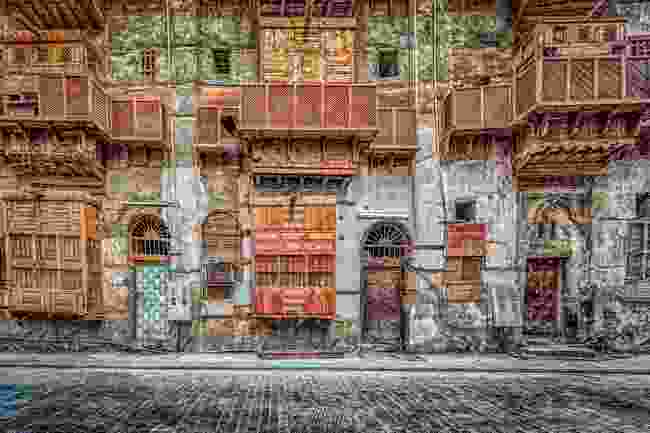 In many ways, Jeddah is caught between two worlds. It’s the historic ‘gate to Mecca’ for millions of pilgrims, yet it’s also a bustling commercial centre. That the two aren’t mutually exclusive makes it all the more fascinating.

Old Jeddah is easy to find, and wandering the ancient streets of al-Balad sees you stroll beneath tall, Hijazi-style houses built from glistening coral stone.

Here, hand-carved teak balconies jut from ice-white facades, some little-changed since the town was founded in the seventh century. Museums now fill out the oldest, but this area isn’t a relic; there’s life here, and Souk Al Alawi, the largest in the country, is a whirlwind of scent, sound and colour.

Head to the waterfront and you’ll see the other side of Jeddah. What was once rather run down was developed in 2017 into a four-and-a-half kilometre long corniche.

From its pier-like ‘floating mosque’ to the mile-high eruptions of King Fahd’s Fountain, it’s a window into modern Saudi. To the north, you can even see the world’s first kilometre-high building, Jeddah Tower, taking shape.

Also try: Capital Riyadh might be one of the wealthiest cities on Earth these days, but you can still find its humble roots in the Al-Turaif district, where a restored mud-brick city lies 20km to the west, marking the site of the first Saudi state.

3. Trek to the edge of the world – literally 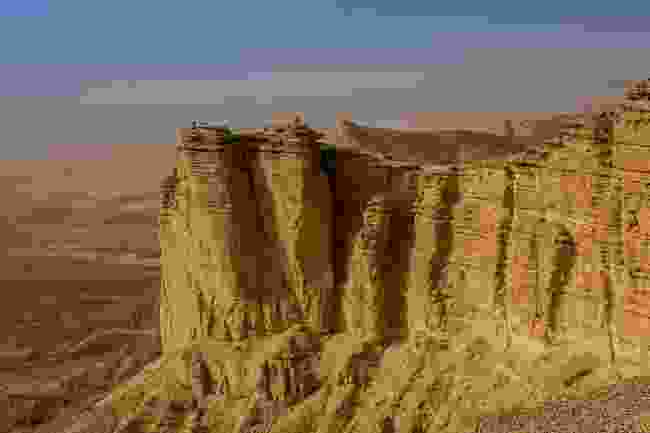 The Edge of the World, Saudi Arabia (Dreamstime)

Jebel Fihrayn is known to most as ‘The Edge of the World’. Gazing out from atop this 300m-high escarpment, it’s easy to see why as parched, rocky plains swamp the horizon. It’s one of the most dramatic views in the country.

Below, the valley floor is in fact an old sea bed riddled with coral fossils, having dried up 150 million years ago.

Meanwhile, the escarpment itself unfurls 1,000km across the province and marks an ancient trade route, where caravans once trailed oils and spices in its shadow.

These days, a new tarmac road runs to the valley gates. Thereafter, it’s a rough drive for 15km, so 4WD day tours from Riyadh are the best way to visit.

From the valley floor, it’s only a 30-minute hike to the top, but clifftop trails spider out. For the adventurous, camping here overnight affords some huge starry skies. 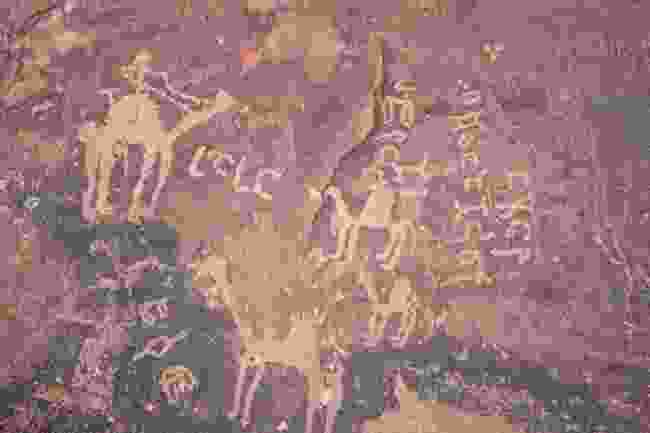 Up in the north, amid the bone-dry wadis and jebels outside the city of Ha’il, history is written across the rock - literally.

Barren and parched, it might not look it today, but this area was once home to a large lake and some of Arabia’s earliest inhabitants. Its legacy is a mass of petroglyphs detailing life here as far back as 10,000 years ago.

The densest collection of drawings are found on the west side of Jubbah, a tiny oasis village 90km north of Ha’il. That said, several sites scatter the UNESCO-listed area.

Even after the lake dried up several thousand years ago, this was still a busy route for spice traders, and some petroglyphs date back only two millennia. Animals, hunters, even what’s thought to be an ancient king meting out justice, scrawl the rocks, though you’ll need a guide to gain entrance to most sites.

Also try: The oldest homo sapien fossil found in Saudi Arabia dates back 90,000 years, so it’s no surprise Saudi has a rich seam of rock art.

One of the closest examples to Riyadh is Musayqirah (aka Graffiti Rock I), a 200m-high rise visible from the Makkah Highway, though you’ll need a 4WD to see it up close.

5. Slake your thirst for adventure in Al-Ahsa oasis 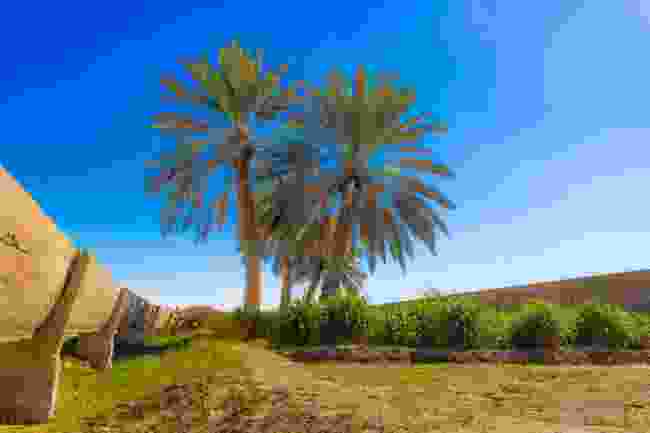 It’s one of the oldest settlements on the Arabian Peninsula, and there’s plenty to do. The region is incredibly diverse. While 95% of Saudi Arabia is desert, Al-Ahsa bubbles with 150 natural springs.

There’s trips to the bird-filled salt marshes of Asfar Lake and the honeycomb caves of Al-Qarah Mountain, while dune trekking in the Empty Quarter (Rub' al Khali), the world’s largest contiguous desert, gives a taste of the old Arabia.

A visit to Al-Hofuf also lets you wander the bustling market stalls of Al-Qaisariya Souq and historic walls of Ibrahim Palace, built during the first flush of Ottoman rule. A fascinating region.

Also try: Another natural oasis is the abandoned village of Dhee Ayn, south of Jeddah.

It takes its name from the fountain that springs from its heart, but the 400-year-old ‘marble village’ is remarkable for another reason: it stands atop a gleaming outcrop of white marble, making it a wonderfully dramatic ghost town to explore.

Note: This article was first published in September 2019. Please consult the UK Foreign Office's travel advice or your local equivalent before planning a visit