9 things you must do in North Macedonia

A little bit Balkan, a little bit Mediterranean, North Macedonia has been shaped by the empires that have conquered it. Expect natural beauty, fascinating ruins and a lively and hospitable local culture...

1. Walk through the ages in Skopje 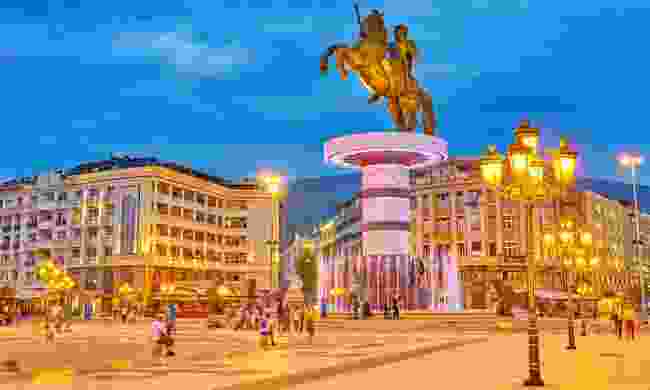 The North Macedonian capital is a quirky mix old and new. Kale Fortress has been guarding the city since the sixth century AD and is partly built from stones from a nearby Roman city that was destroyed by an earthquake 518 AD.

A huge, kitschy statue of Alexander The Great has been standing rampant in Macedonia Square since being unveiled in 2011. Walk the streets and you’ll find a surprise around every corner.

The Old Bazaar on the eastern bank of the Vardar River remains much the same since its medieval heyday: a labyrinth of narrow, cobblestone streets where hawkers sell their wares. Macedonia Square tempers Alexander’s grandiosity with a line of Baroque and Neoclassical buildings.

And looking over the entire city, the 217ft high Millennium Cross sits atop Vodno Mountain. Catch the cable car for astounding views.

2. Hike to the top of Mount Ljuboten 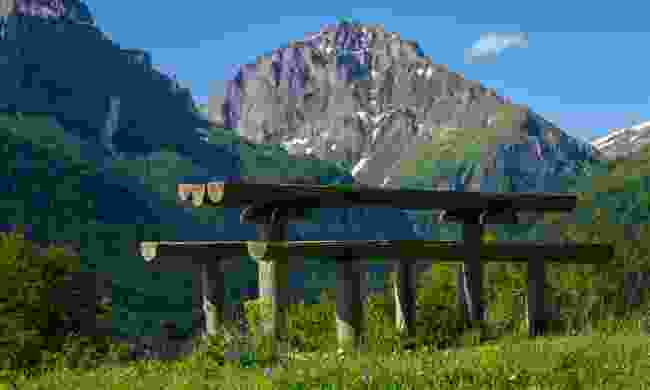 Looming high along North Macedonia’s north-west edge, the Šar (or Sharr) Mountains form a natural barrier with the country's northern neighbours. It is home to untouched landscapes, abundant wildlife and some of the best (and least-used) hiking trails in Europe.

One of the best is the hike to the top of Mount Ljuboten, a pyramid-shaped peak that stands 8,196 feet above sea level, and takes five hours to climb.

In winter, it is snow-capped. In spring, it is carpeted in wildflowers. Lynx and wild goats roam its slopes. Eagles and hawks fly above it. And at the top, it feels like the whole of North Macedonia and Kosovo lay before you.

A simple guesthouse is situated at the treeline, making a great base for your climb. On your return from the summit, you’ll be greeted by a warming fire and a hearty homemade feast of North Macedonian treats.

3. Stand in awe at the Painted Mosque in Tetovo 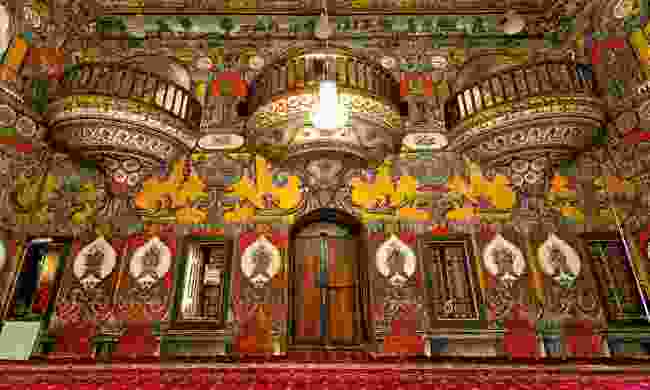 The gilded interior of the Painted Mosque (Shutterstock)

Get ready for a technicolour treat. The Painted Mosque in Tetovo, 43km from Skopje, is one of the brightest sights you’ll see in North Macedonia.

Built in the 15th century, razed to the ground in the 17th and rebuilt in the 19th, no colour in the artist's palate has been left unused on its stunning interior.

Sitting on the southern side of the Pena River, the exterior of the mosque only gives a hint of the splendours within – just a few brightly coloured rectangles framing the lattice windows, that’s all.

Inside, every inch of the walls and balconies are covered with flamboyant frescoes, painted in floral, geometric and arabesque patterns. Slip your shoes off, step inside and prepare for your senses to be overwhelmed.

4. Kayak through the stunning Matka Canyon 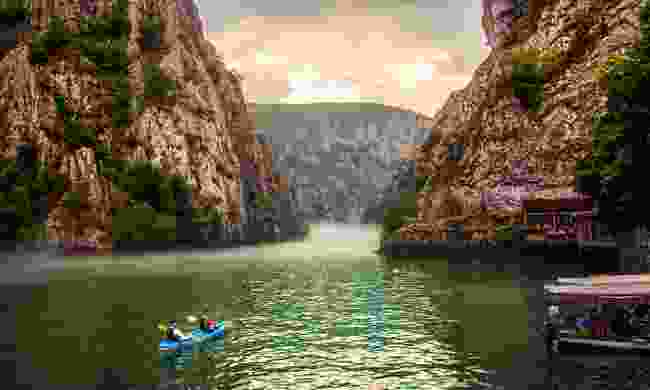 Kayaking through Matka’s awe-inspiring canyon is a highlight of any visit to North Macedonia. From water-level, the rugged cliffs seem even more imposing.

Their mood changes throughout the day, as the sun drifts across their face, shadows dancing across the stone. Best of all? The canyon is less than 10 miles from downtown Skopje.

Kayaks are the only watercraft individuals are allowed to use here and the trip up to Vrelo Cave and back is the most popular paddle. Simply hire a kayak from just in front of the Canyon Matka Hotel and set off.

Kayaking to the cave and back takes about two hours, but leave time to explore the cave, which has a series of dimly lit paths and wooden stairways, leading to a series of underground lakes. 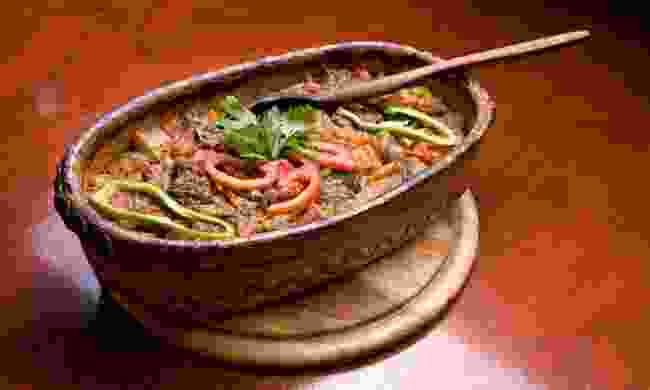 North Macedonia is famous for its hearty local food (Shutterstock)

North Macedonian’s love their food and are determined that you do, too. A tasty mix of Turkish, Mediterranean and Balkan cuisines, every meal is a feast with you the special guest.

Burek, or 'salty pie', is a staple. You’ll find this warm, doughy treat, filled with spinach or cheese, everywhere. Ajvar, a red pepper and garlic sauce, is ubiquitous, as is shopska, a salad of tomato, onion, cucumber, and green pepper topped with tangy sheep cheese.

And that’s just for starters. You’ll also be plied with tavče gravče, a hearty bean stew, peppers stuffed with ground meat, sarmi (stuffed cabbage) and an assortment of grilled meat.

Pair it with a nice wine from one of the country’s 84 wineries – those from Sopot are particularly well regarded - and you have pretty much the perfect North Macedonian meal. 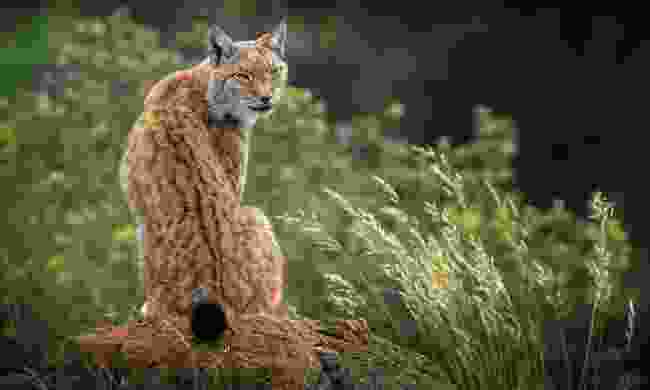 A European lynx in the wild (Shutterstock)

Mavrovo is North Macedonia’s largest National Park and arguably its most beautiful. A kaleidoscope of gorges, pine forests, karst fields and waterfalls, it is the perfect place to break your travels between Lake Ohrid and Skopje.

In winter, it is home to the country’s best ski slopes. But it is in summer when the park truly comes into its own. Within the park’s boundaries you’ll find monasteries, cheese makers and pretty villages like Janče and Galičnik, famous for its traditional village wedding festival, one of the country’s quirkiest summer festivals.

There’s wildlife too, including bears, lynx, wolves and deer – and 123 species of birds, many endemic to the rolling forests and highlands here.

7. Commune with God and nature at Lake Ohrid 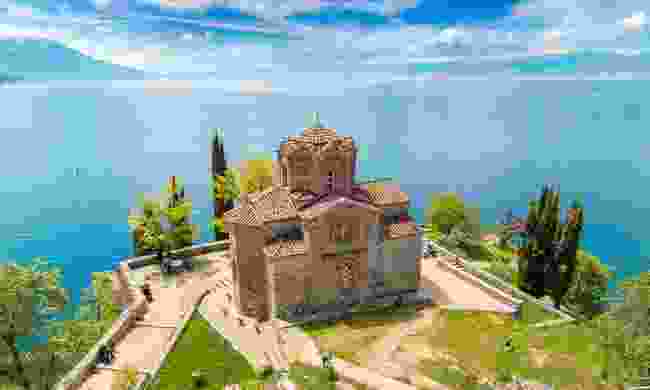 There’s nowhere quite like Lake Ohrid. A beguiling shade of blue, ringed by nature and dotted with ancient monasteries, it is the spiritual heart of North Macedonia. That’s why it’s one of the country’s most treasured gems. And why the whole area was declared a UNESCO World Heritage Site.

The lake itself is a thing of breathtaking beauty. Stretching as far as the eye can see, it glitters and shimmers, one of the oldest lakes in the world, dating back more than a million years. Take a seat, preferably on a grassy hill overlooking it, and marvel at its many moods.

Tucked on one of those hilly shores you’ll find Ohrid, one of the oldest settlements in Europe. It is crammed with dozens of historic churches and monasteries, including the Church of Saint John at Kaneo. It is picturesquely perched on the edge of the Lake. St. Panteleimon, and is the world’s oldest Slav monastery, boasting intricate stonework that has been meticulously restored.

Further along the lake, 20 miles from Ohrid, you’ll find St Naum, one of the oldest and the richest monasteries in North Macedonia.

8. Wander through ancient Macedonia in Heraclea 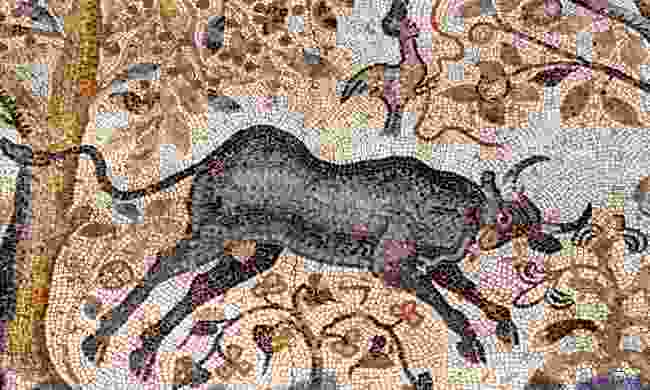 A mosaic in Heraclea (Shutterstock)

Famous for its stunning mosaics, ancient amphitheatre and bathhouses, Heraclea is the best preserved ruins from the time of the ancient Macedonian Empire.

Polybius and Strabo wrote about it. Caesar tried to conquer it. And wandering around the atmospheric ruins is one of the most rewarding things you can do in North Macedonia today.

The ruins sit just south of Bitola, on the slopes just below the village of Bukovo. There’s a small museum with a few artefacts, but it is much more rewarding to amble through the ruins and discover its treasures, like the Episcopal church and the Roman baths, by chance.

9. Take time to stop and smell the coffee 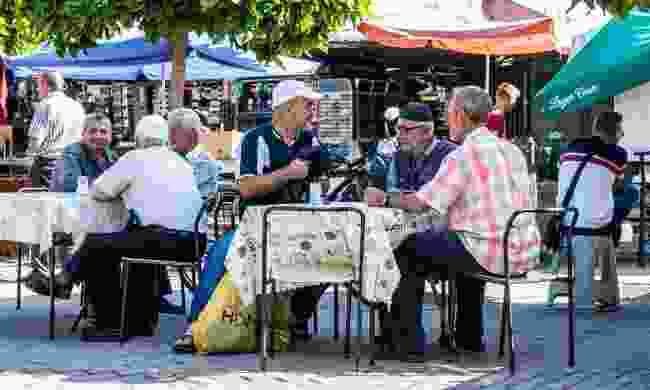 Ever since the days of the Ottoman Empire, coffee has played an important part in North Macedonian social life and even religion.

Meeting for coffee is a part of everyday life, offering the chance to catch up with friends, share gossip and swap news. It is also incorporated into many traditional ceremonies like weddings and christenings.

It is believed there are over 5,000 coffee establishments in North Macedonia, from traditional Balkan coffee shops and kafeana (a type of coffee bar particular to the regions) to more modern, western style outlets.

Follow the lead of the locals. Grab a seat at an outdoor cafe, order something strong and black, and watch the world go by.

More things to do in North Macedonia:

How to spend 24 hours in Skopje