9 incredible things you must do in Madagascar

Ancient landscapes, postcard-perfect beaches and a cuisine influenced by every corner of the globe, Madagascar has something for every traveller. Without even mentioning the lemurs…

1. Look out for lemurs 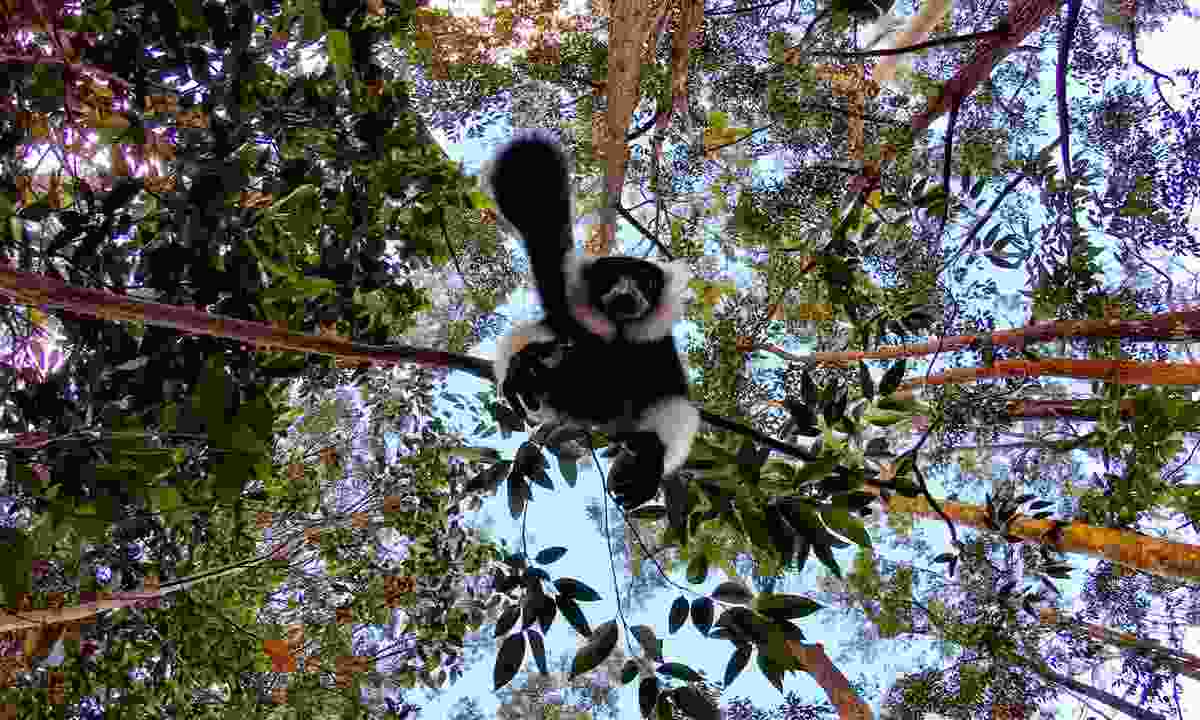 Chances are, the main reason you’re going to Madagascar is to see lemurs in the wild. These charismatic, intelligent animals are endemic to the island and nearly 100 different species and sub-species of lemur can be found.

The island's national parks offer your best chance, with many of them criss-crossed with trails and guides to help you see a lemur or two. Andasibe-Mantadia National Park is closest to the capital and has a large population of indri, the largest lemur.

You’ll hear their distinctive call from miles away. Ranomafana is another popular park, offering rich and diverse wildlife as well as rare sightings of greater bamboo lemur and golden bamboo lemur.

Head to Berenty Reserve for guaranteed sightings of brown lemurs, ring-tails and sifakas. It’s where all the TV documentaries film. The community-run Anja Reserve is home to several troops of cheeky ring-tailed lemurs.

2. Drive through the Avenue of Baobabs 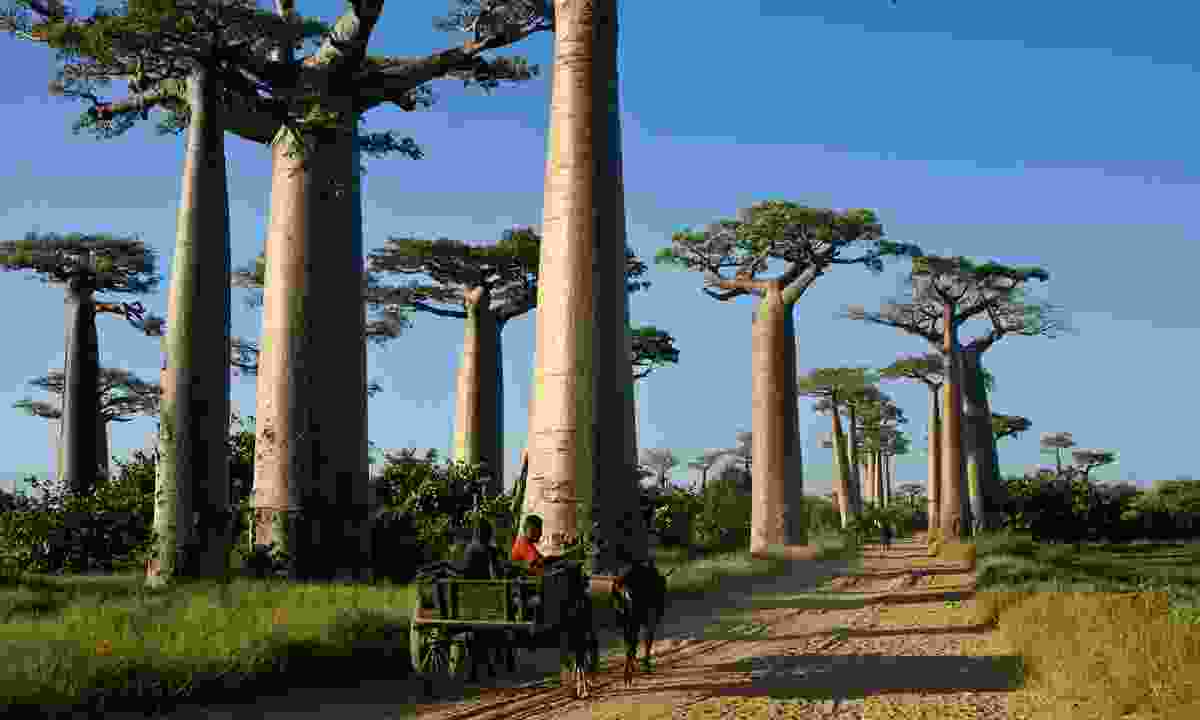 Madagascar is home to six types of endemic baobab trees, the largest of which grow 30m high and 14m in diameter.

They're an intrinsic part of the country’s landscape, particularly in the drier south, and in the past local people relied on them for food and water. Locals call baobabs the ‘tree of life’, and even today these strange bulbous trees remain in Malagasy folklore and beliefs.

The most impressive and photogenic stand of baobabs lines the rutted red dirt road between Morondava and Belon’i Tsiribihina in western Madagascar.

Known as the ‘Avenue of Baobabs’, it is lined either side with giant baobabs, some believed to be over 800 years old. It is a striking sight, especially at sunrise and sunset, and as iconic to the country as lemurs. Indeed, plans are underway for the avenue to become Madagascar's first official natural monument. 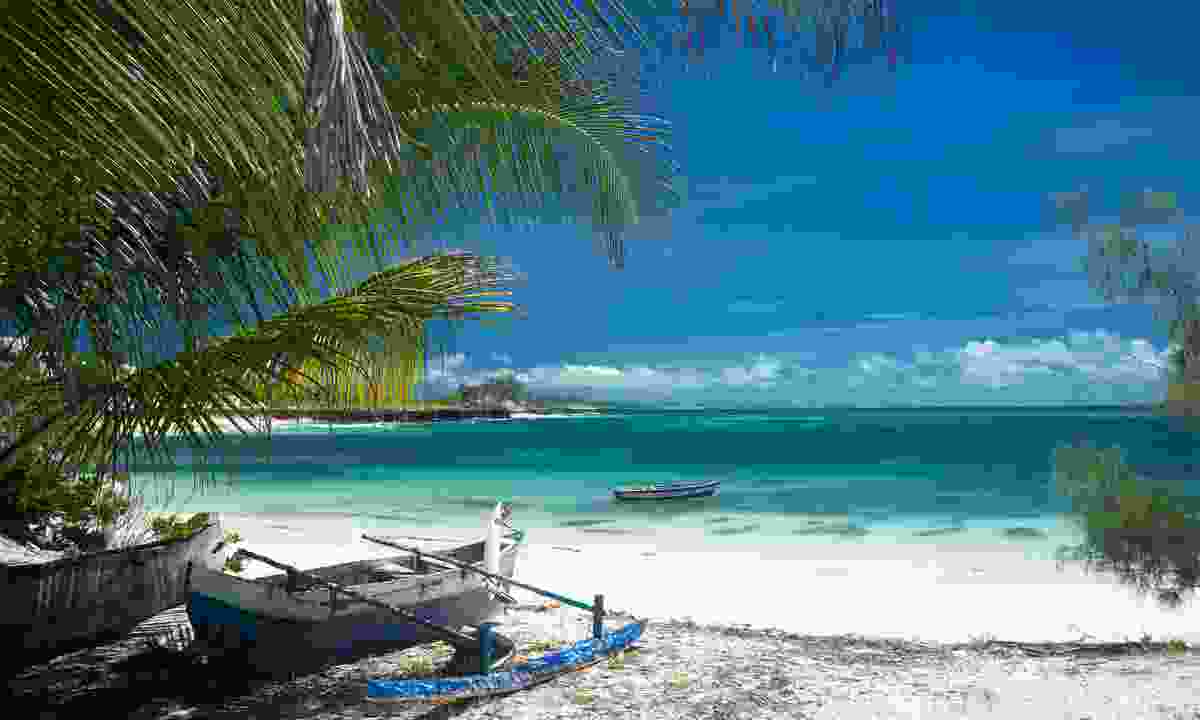 As you’d expect of an island anchored in the azure waters of the Indian Ocean, Madagascar is blessed with its fair share of beautiful beaches.

Being a rather large island, with over 5,000km of coastline, it offers beaches of all different kinds: some deserted and remote, others better suited for aquatic activities like surfing and kite-surfing.

The north-east coast around Île Sainte-Marie offers palm-fringed stretches of white sand, secluded coves and turquoise, clear waters. Nosy Be, in the north west, is just as beautiful and offers a more tropical vibe, particularly in the idyllic beaches of Ambatoloaka and Ambondrona. The Mitsio Archipelago is known as the ‘Maldives of Madagascar.’ Take your pick.

For something a bit more authentic try Anakao, a fishing village, complete with colourful boats. It has a stunning white sandy beach and crystal clear waters perfect for snorkelling. Or Manafiafy, on the south coast, with  tree-lined bays many tourists don't go to. Tôlanaro, also in the south, offers reliable swells for surfing and kite-surfing.

4. Walk through a stone forest in Tsingy de Bemaraha 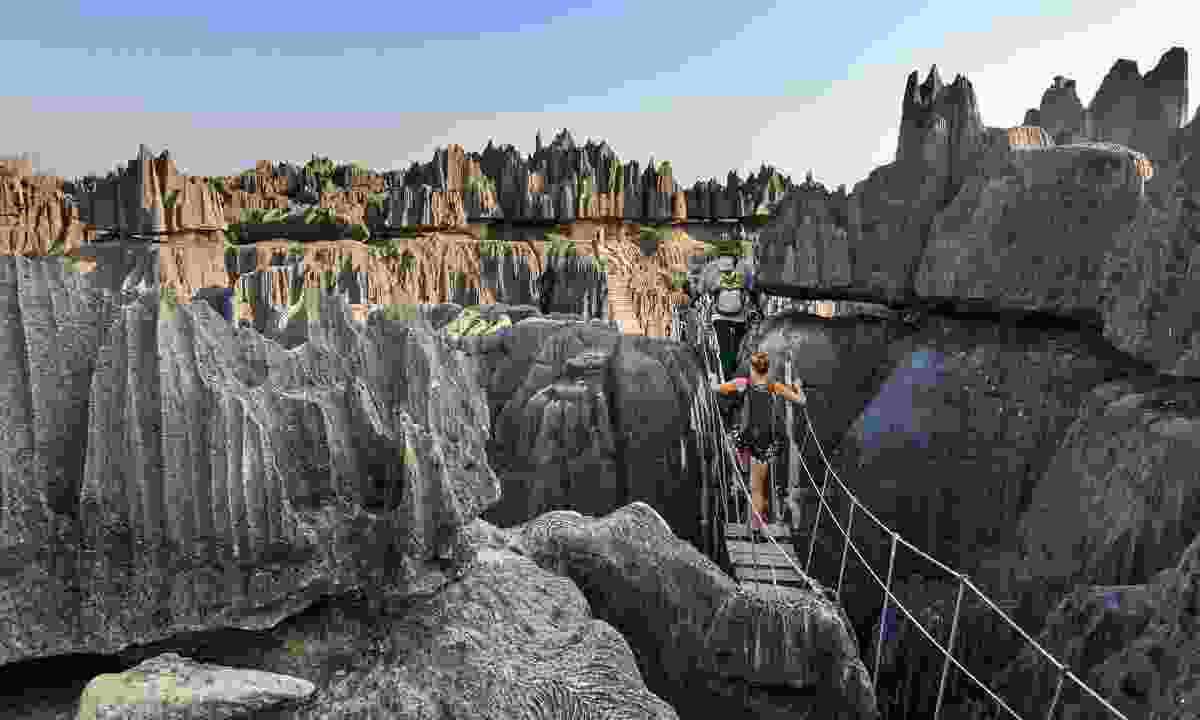 Created 200 million years ago when the limestone seabed was pushed upwards, Tsingy de Bemaraha is an otherworldly landscape of jagged karsts, sharpened by erosion and time.

In Malagasy, tsingy means the 'place where one cannot walk'. Looking across the spiky forest of stone, you can immediately see what they mean.

Getting to Tsingy de Bemaraha is not easy. Access is by a dirt road that turns into an impassable quagmire during the wet season. But when you do, the rewards are immense.

A comprehensive set of aerial suspension bridges, steel cables, pegs and ladders take you deep into the ‘forest’ – with a trained guide and all the proper safety equipment, of course. The surrounding reserve is home to a plethora of truly unique reptiles, birds and plants, as well as 11 lemur species exclusive to the park.

5. Explore the hills of Tana 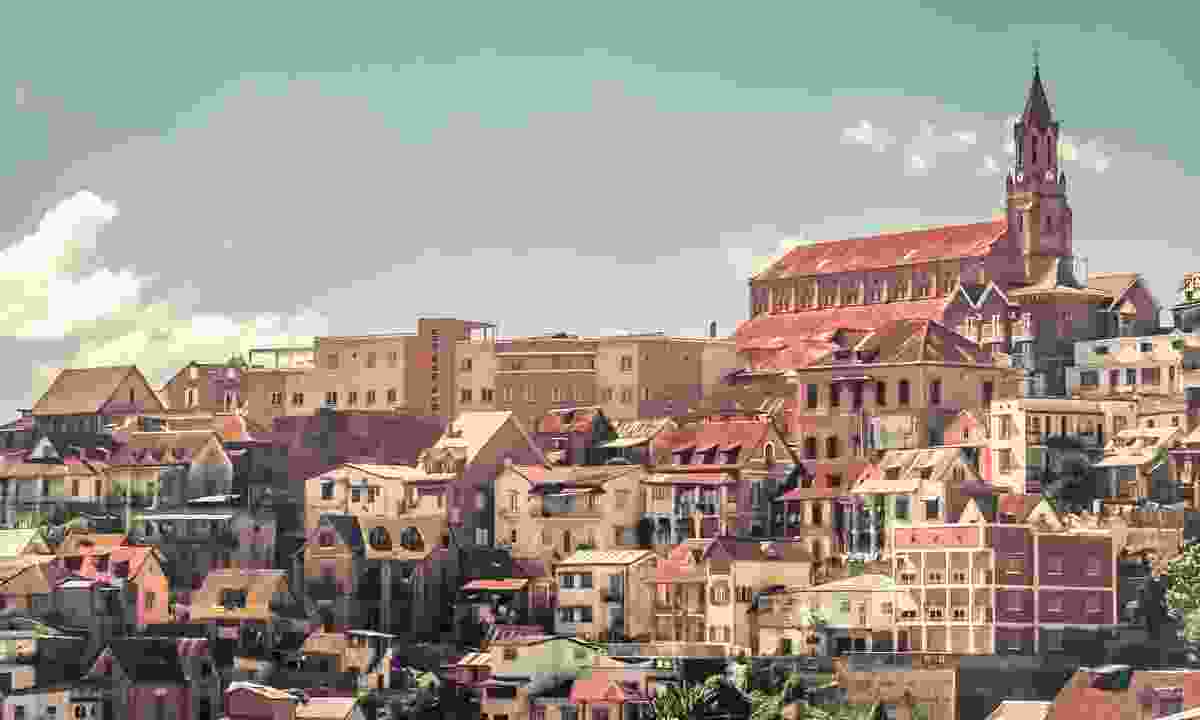 When you first arrive in the capital, Antananarivo, you could be forgiven for thinking it is another dusty and chaotic African city. The transport hub is centred in the lower part of the city, next to Analakely: a sprawling, chaotic market where everything you can imagine is bought and sold.

But Tana, as the locals call it, is a city built on hills. And like the Malagasy royalty and French colonialists before you, you should take to them – particular the district of Haute-Ville.

Here the noise abates, air seems clearer and the streets are lined with beautiful colonial buildings built by the French. It is here you’ll find the city’s art galleries and museums, as well as its best cafes and restaurants.

6. Ride the rails from Fianarantsoa to the coast 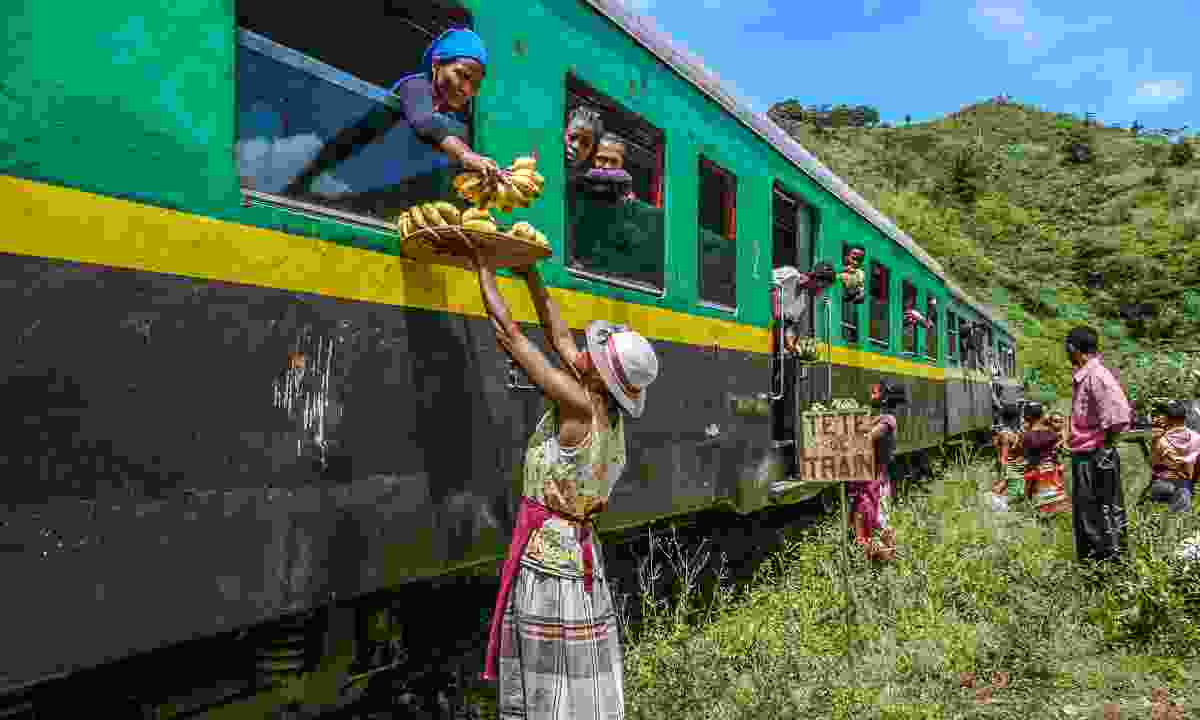 Buying bananas on the journey to Manakara (Shutterstock)

The years since independence have not been kind to Madagascar’s railways. Most have fallen into disrepair and abandoned as economic hardship hit.

One line, however, continues to rattle on, a rickety track from Fianarantsoa in the highlands to Manakara on the coast. Riding it is one of the most thrillingly authentic things you can do on Madagascar.

Cobbled together with whatever rolling stock is working at the moment, the train ride is not particularly comfortable, even in first class. It’s not that fast either. It can take between 12 to 24 hours to cover the 163km to the coast.

But along the way you pass through some of Madagascar’s most beautiful scenery and get a rare insight into communities where the train is the only link to the outside world. There are 18 stops along the way, each one theatrical, as goods are loaded and unloaded and hawkers offer you all kinds of local treats to eat and drink.

If you’re feeling brave, the driver allows a handful of passengers to sit at the front of the engine for an exhilarating, theme park style rollercoaster ride through the Madagascan forest.

7. Enjoy a world of flavours in every meal 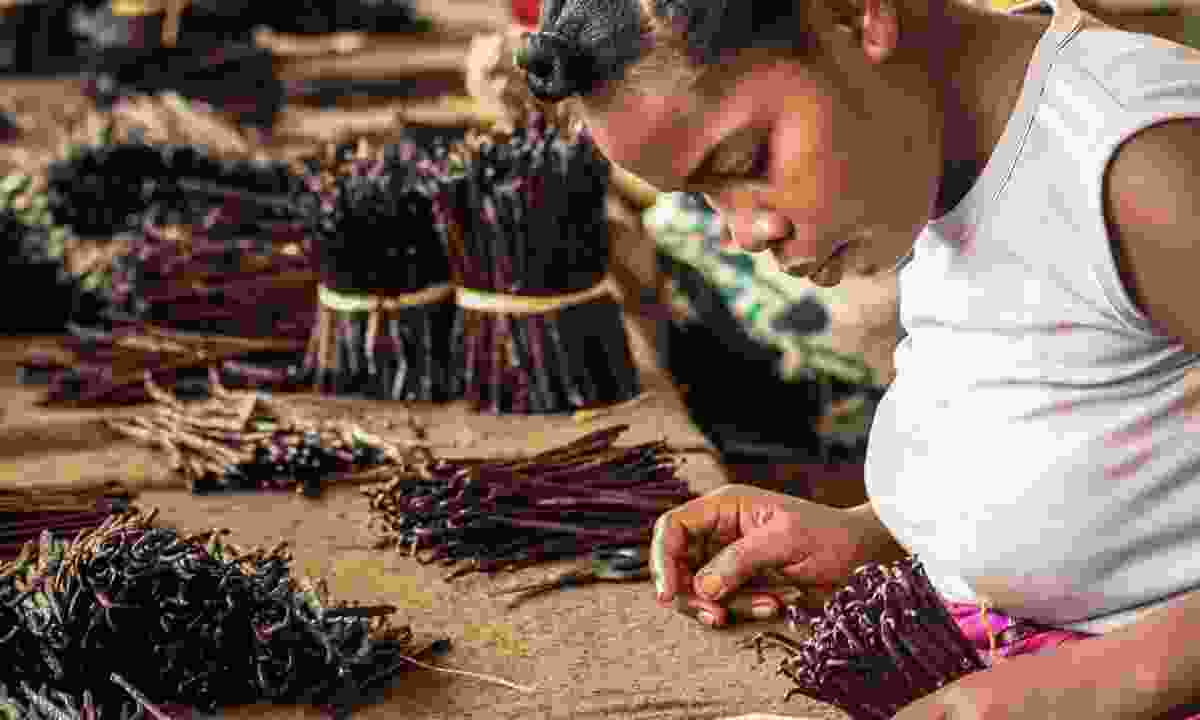 Madagascar has been a cultural and trading crossroads for centuries and that can be seen in its food. Every dish hints of far-flung flavours, whether than be French, Indonesian, Indian, African or Middle Eastern. Whether you eat from a roadside stall, a small hotel or restaurant, your tastebuds are in for a treat.

Breakfast in Haute-Ville, for example, could see you enjoying French coffee and pastries. For a mid-morning snack, try koba, a popular street food consisting of banana, peanut and rice paste wrapped in a banana leaf casing.

Kabaro, made from curried lima beans and coconut, is a light and tasty lunch. Keep plenty of space for romazava, a traditional beef stew with green vegetables, onions and an array of spices, served with rice. It's regarded as Madagascar’s national dish.

On the coast, fresh seafood dominates the menu. And every meal should be accompanied with the local Three Horses Beer, or if you’re feeling brave, a shot of the local firewater made from burnt rice water called ranonapango. 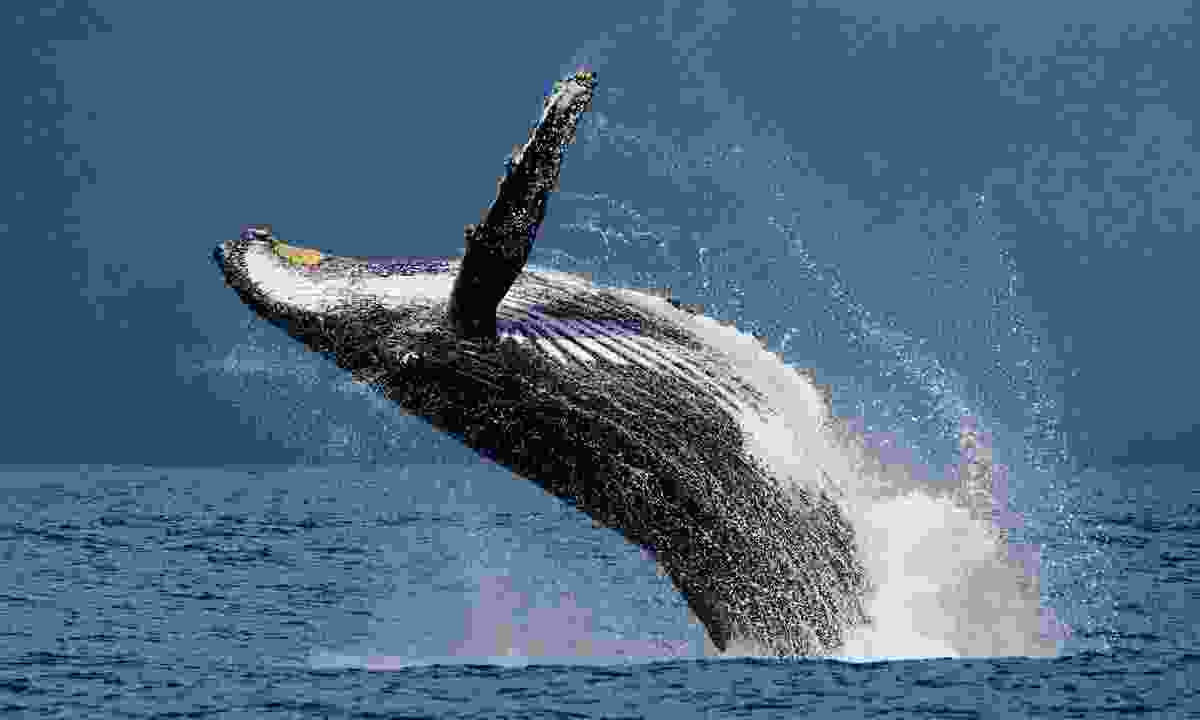 A humpback breaching in Madagascar (Shutterstock)

Madagascar is a fantastic place to dive, whether you’re an experienced diver or just starting out. The south west boasts the world’s third largest coral reef system, home to over 6,000 marine species, and the waters around Nosy Be and other islands in the north offer good visibility, perfect for snorkelling.

It’s Madagascar’s aquatic visitors that make it a truly remarkable underwater destination. Whale sharks visit Madagascar between September to December, gathering to feed on blooming plankton off the islands of the north west. They can easily be spotted from the surface.

From July to September, you’ll spot humpbacks, gathering in numbers off north-eastern island Île Sainte-Marie. They gather here to mate and give birth before returning to Antarctica. An incredible underwater experience. 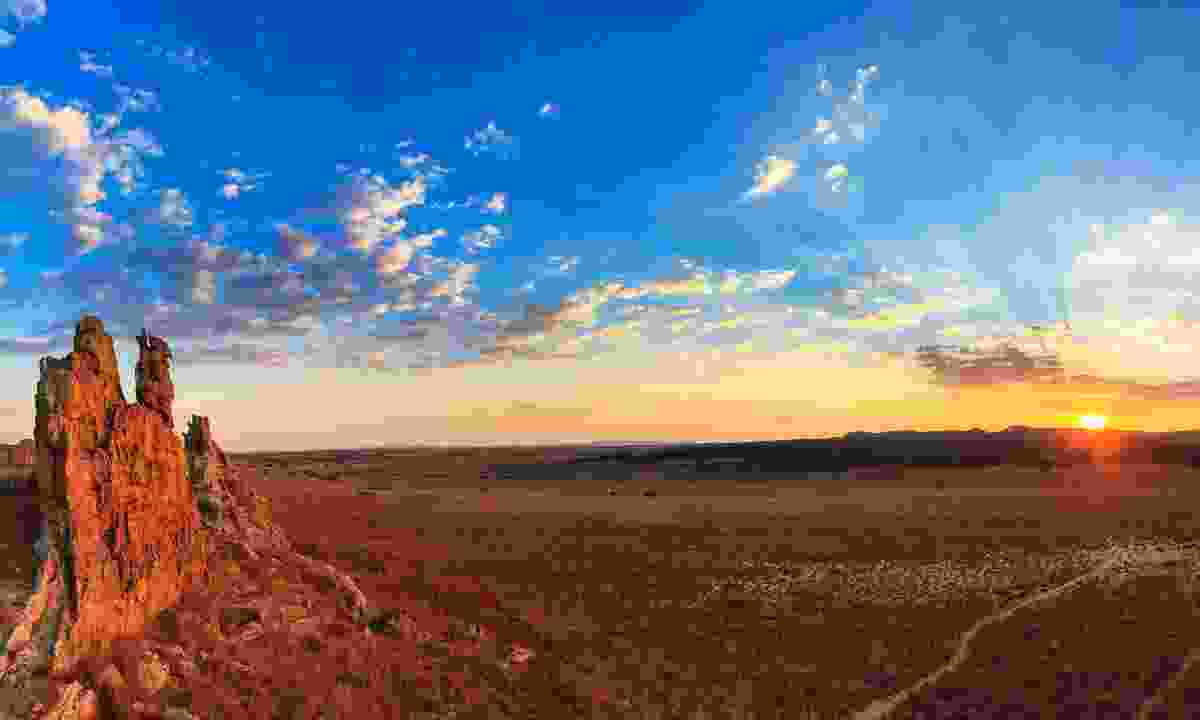 Located in the south-central part of the country, Isalo National Park is a wild land of cliffs, ravines, gorges, and canyons that is perfect for hiking.

Considered scared by the Malagasy Bara people, who bury their dead in the caves high in the gorges, the park is also teeming with endemic flora and fauna. It’s not unusual to come across a troop of lemurs grazing here, too. They remain relatively unafraid of humans.

The park offers hikes of varying difficulty.Exploring the Canyon des Makis is a relatively flat and easy walk.

More things to do in Madagascar:

In search of Madagascar's aye-aye