10 of the best things to do in Bogotá, Colombia

Long overlooked by travellers, the sprawling, cosmopolitan and historic Colombian capital has transformed into a hip, must visit destination. Discover the best things to do in Bogotá...

1. See the capital from high above 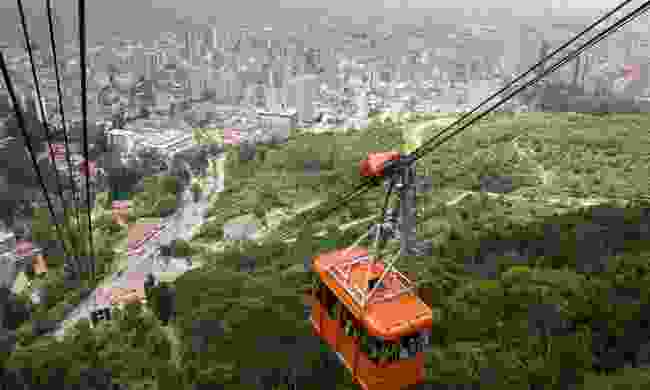 Bogota's cable car looking back towards the city centre (Shutterstock)

Get the lay of the land in spectacular fashion. Rising 3,152m above sea level, Cerro Monserrate offers remarkable vistas over Bogotá where all of downtown and the south side are visible. The famous mountain, considered sacred before the Spanish arrival in the 16th century, is a popular but essential part of a first-time visit to the city.

There are several ways to ascend Cerro Monserrate, from the leisurely to the daunting. The cable cars and funicular railway both offer regular services to the summit while the steep 1,500-step hiking trail is for braver souls. Either way, the view is worth it. 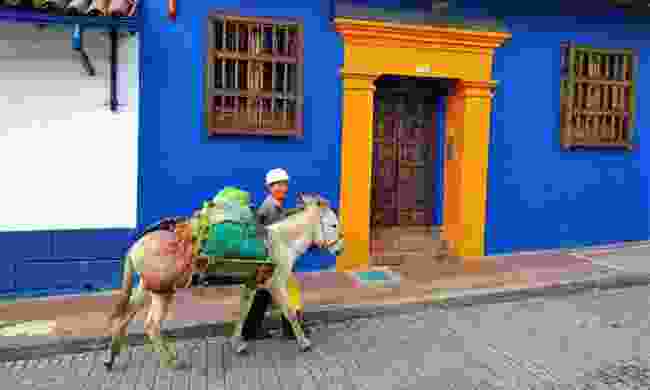 A man leading a donkey through La Candelaria (Shutterstock)

A leisurely stroll through this beautiful neighbourhood is an essential introduction to Bogotá. It’s also home to a number of museums, restaurants and quaint cafes. A more recent addition to the attractions here is the jaunty street art - the Bogotá Graffiti Tour is great way to check out the city’s creative side.

The vast Plaza de Bolívar is the epicentre of La Candelaria and a bronze statue of Latin American liberation icon Simón Bolívar, the city’s first public monument, resides right in the middle. 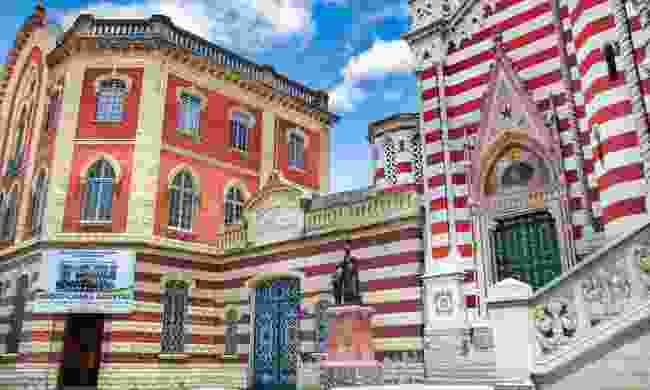 Santuario Nuestra Señora del Carmen is a beautiful cocktail of Gothic and Byzantine architecture, notable for its red and white horizontal stripes, both inside and outside.

This distinctive cathedral was completed in 1938, so it’s a relatively recent addition to the historic La Candelaria district, but is instantly recognisable for its striking design.

Restoration efforts were required in the late 1980s thanks to pollution and humidity, which took their toll on the structure. It’s now back to its former glory, and remains Bogotá’s youngest National Monument.

4. Indulge while on the go 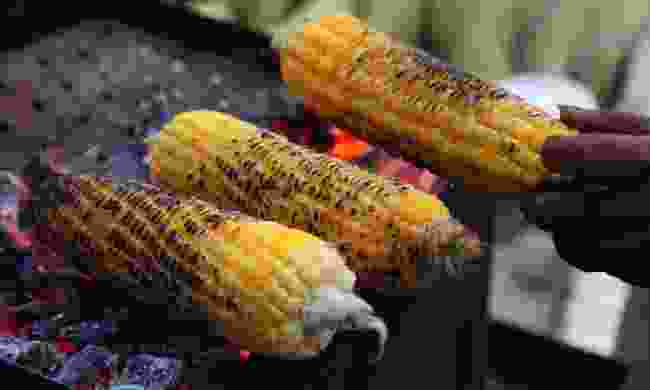 Corn grilling on the streets of Bogotá (Shutterstock)

Bogotá’s high altitude means the city can get a little chilly, so cuisine tends to be warm and hearty. Explore Bogotá on the go by stopping at one of the many street vendors selling carb-filled delights such as arepas and empanadas.

While empanadas are popular all over Latin America, empanadas bogotanas are the hearty local version and are made with milled corn, filled with a meat and potato stew, and fried. Corn on the cob grilled over coals is another of Bogotá’s iconic street foods. It can be found around the city throughout the day and into the evening.

5. Step into the bizarre world of Botero 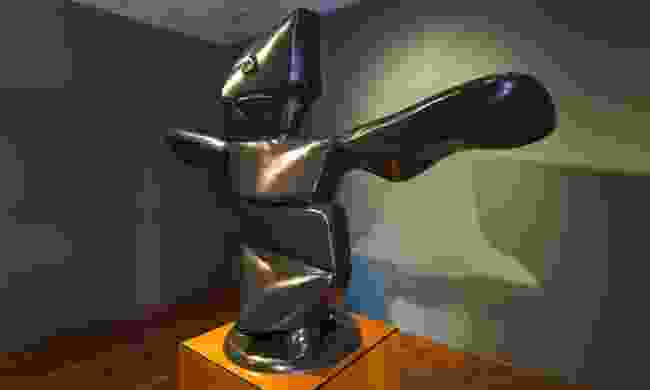 For those unfamiliar with the work of Fernando Botero, this is an opportunity to discover an artist with a truly distinct style. Perhaps Colombia’s most famous artist, his paintings of people, animals and objects in exaggerated, rotund form are a lighthearted break from the work found in more contemporary art museums.

Set in an elegant colonial manor house in the La Candelaria neighbourhood, the Museo Botero also houses pieces from his personal collection including work by Monet, Degas and Picasso. Aside from use of an audio guide, admission to this unique museum is free. 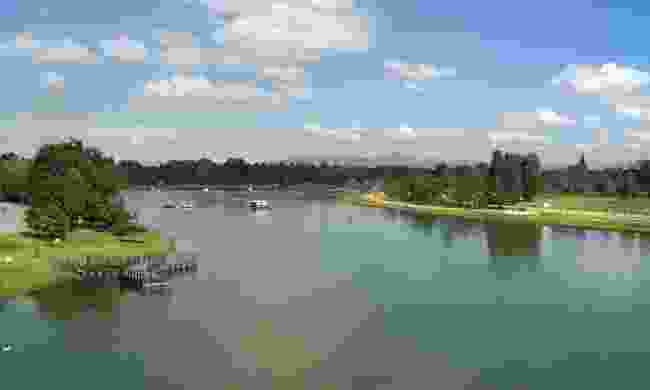 The urban sprawl of 10 million citizens becomes a hazy memory when exploring the immense Simón Bolívar Park. Bogotá isn’t a city well known for its green spaces but the 400 hectares of woods, playing fields, cycle tracks and cafes offer a relaxing escape from the hum of the city.

With a large lake at its heart, Simón Bolívar Park is actually slightly bigger than New York’s famed Central Park. As well as the Festival de Verano, its big summer festival, it also hosts numerous music shows throughout the year and showcases everything from rock to salsa to hip hop.

7. Get on two wheels for Ciclovia Sundays 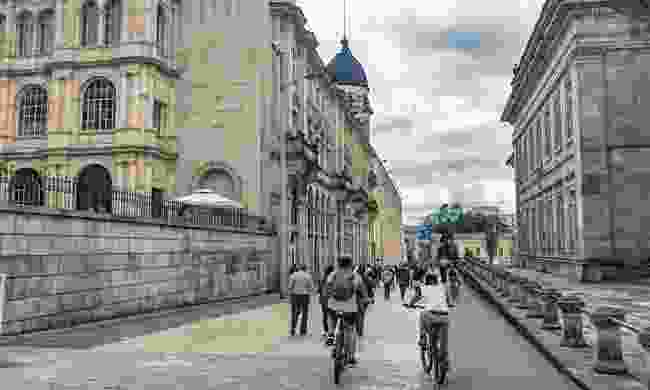 The Ciclovía is the biggest, most frequent mass recreation event in the world. What started as a small anti-car protest in 1974 has blossomed into an extraordinary spectacle each week.

From 7am to 2pm every Sunday, a little over 75 miles of roadway are turned over to the Ciclovía, a joyful car-free slalom through the city. As many as one-and-a-half million Bogotanos come out on whatever form of transportation they please: bicycles, roller skates, scooters, wheelchairs, skateboards - as long as it isn’t motor-driven.

8. Wander around the Usaquén Flea Market 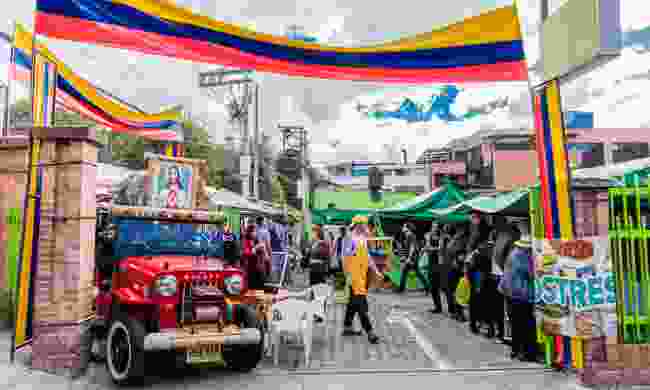 This attractive barrio in the north of the city maintains a village feel, despite amalgamating into the Bogotá city limits. It now boasts trendy cafes and restaurants, as well as a charming central park and parish church.

Open from 9am to 5pm, Usaquén is perhaps more upscale than some of the more inner city markets, but the vivid colours and quality of the goods make it an essential place to visit. 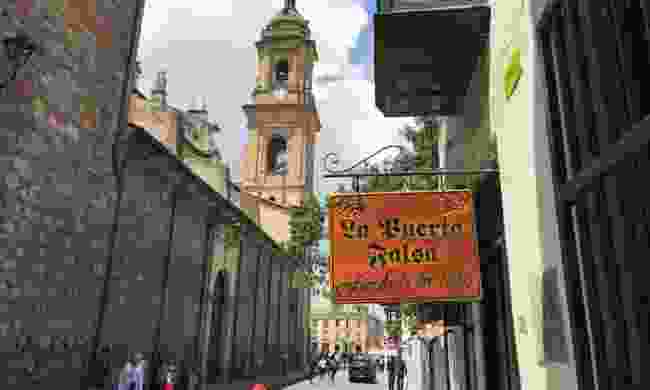 This 200 year-old institution, located just one block from the Plaza de Bolivar, keeps everything simple - but hungry visitors just can’t stay away. La Puerta Falsa (The False Door) offers humble Bogotano home-cooked meals in a cosy little café that’s been a reliable haunt for well-known writers, actors and ex-presidents during its tenure.

On the small menu, you’ll find local classics like Ajiaco and Chocolate Completo (who knew chocolate and cheese went so well together?) but its biggest draw are the tamales, a doughy mix of chicken, pork belly, eggs and vegetables all wrapped in a plantain leaf and steamed for hours.

10. Marvel at the Museo Santa Clara 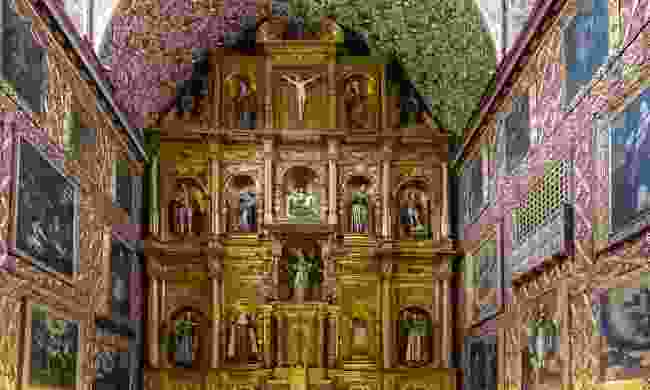 The modest exterior of this single-nave 17th century church might not catch your eye when you’re on the way to many of La Candelaria's colourful attractions - but on the inside, it's a whole other world.

Deconsecrated in the 1960s and converted into a museum by the government, the Museo Santa Clara’s glittering interior houses over 140 Baroque paintings, that completely cover the walls.

While Bogotá has no shortage of colonial churches, there are none as ornate or original as the Museo Santa Clara.

More epic things to do in Colombia:

5 things you must do in Medellín, Colombia

Bogotá and around – Colombia Itinerary