There’s every reason to explore Cat Ba Island in Vietnam: history, hikes and views for days. Simply hop on a boat to have Halong Bay, and the lesser-known Lan Ha Bay, at your fingertips, too...

1. For its cheaper excursions to Halong Bay 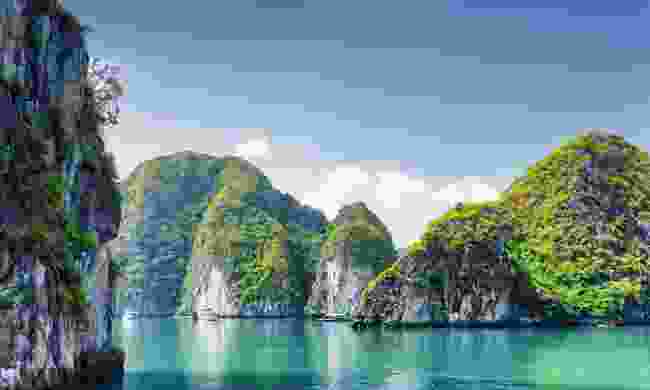 Book a cruise from Hanoi to the world famous bay and you’ll probably be paying big bucks, even for the least luxurious options. Depart from Cat Ba, however, and you’ll find a boat willing to take you for a lot less money with a fraction of the people on board.

You’ll still get to marvel at the same, life-affirming view of thousands of dramatic green-speckled karsts floating on the turquoise water, but you’ll have more cash left over and fewer people vying for the prime viewing spots.

2. For its proximity to Lan Ha Bay 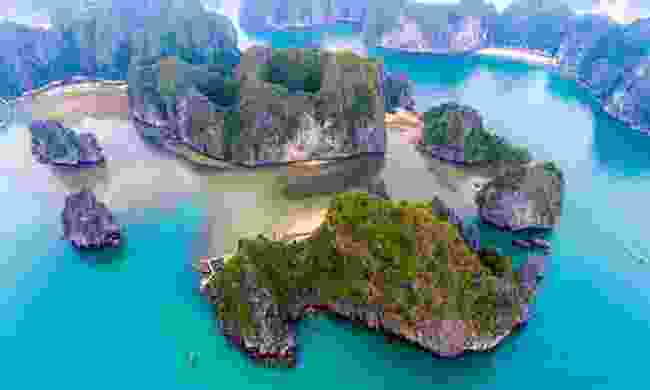 Halong Bay may grace the front of many tourist brochures, but a stay on Cat Ba Island reveals another pristine bay often missed by the masses. Venture away from the tourist trail by opting to explore Lan Ha Bay, and you’ll be rewarded with almost identical views, without the crowds.

Gaze out from the deck as you sail through the maze of Jurassic Park-esque mountains, and pass charming floating villages bobbing and reflecting on the water’s surface. It's an incredible experience, but there’s a lot to do and see here off the boat, too.

Make sure you choose a boat trip that includes the excursions you most want to do in the price. Snorkel in an almost transparent blue lagoon. Swim to one of the many patches of powdery sand that fringe the uninhabited outcrops. Moor up at Monkey Island, where the inquisitive primates that reside here aren’t afraid of people and will almost certainly walk over to get a closer look at you. Or take shelter from the sun by paddling a kayak through one of the many bat-filled caves that pockmark the bay.

3. For its fantastic viewpoint over the entire archipelago 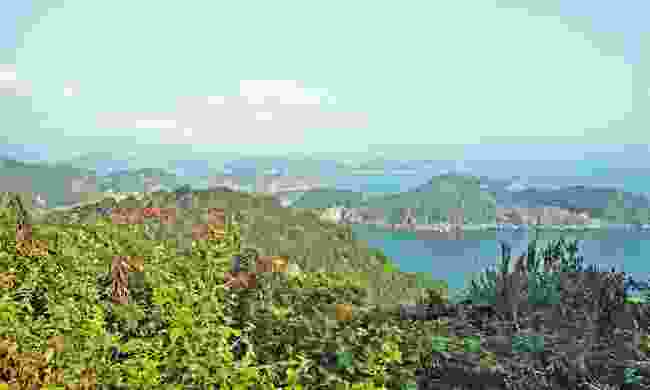 The water isn’t the only place to catch a glimpse of the UNESCO-listed bays. One road in Cat Ba's harbour-side main town takes you to the foot of Canon Fort.

Follow the long (but gentle) road that winds up to the top of this historical landmark, to walk around the border of the mountain and enjoy panoramic views over the glistening archipelago. The opposite side reveals views over the thick jungle canopy covering most of Cat Ba Island.

While you’re at the top of Canon Fort, take time to inspect the models of Vietnamese soldiers firing canons towards the sea. Walk through the concrete trenches, and learn how this historic fort was used as a vantage point during the Vietnamese war.

Take one last look at the memory-imprinting view in the cafe, alongside the grazing goats and pigs tottering around, before heading back down the hill.

4. For a further insight into the war years 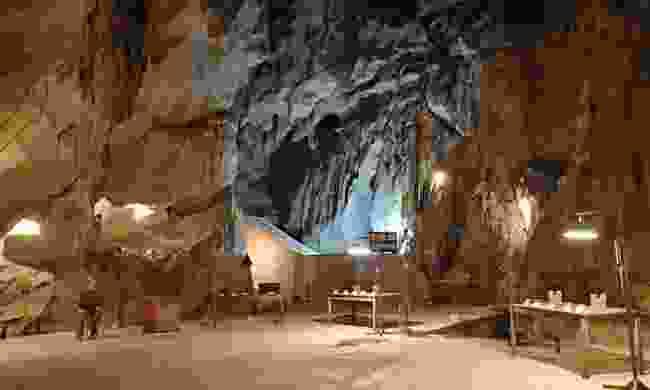 One of the many incredible rooms inside Hospital Cave, which was used during the Vietnam War (Shutterstock)

Around 10km from Cat Ba Town, hidden from the road and sky by a thick tangle of green trees, is Hospital Cave.

The engineering of this three-storey concrete cavern - which was equipped with ventilation, escape tunnels and fresh water - is extremely impressive. But it’s the important part the cave played in the Vietnam War that makes it worth the visit.

Hire a local guide and enter the mouth, to walk between the cool walls of the cave, devoid of any natural light. Listen to the echo of your guides voice as the stories of how lives were saved, soldiers relaxed, and leaders of the Viet Cong took shelter there.

Marvel at the cave's strategic location, and the fact it acted as a hospital during the war years. Walking from room to room, you'll see operating tables, old offices, and even a chamber with a former cinema room and swimming pool.

5. For its uncrowded, secluded beaches 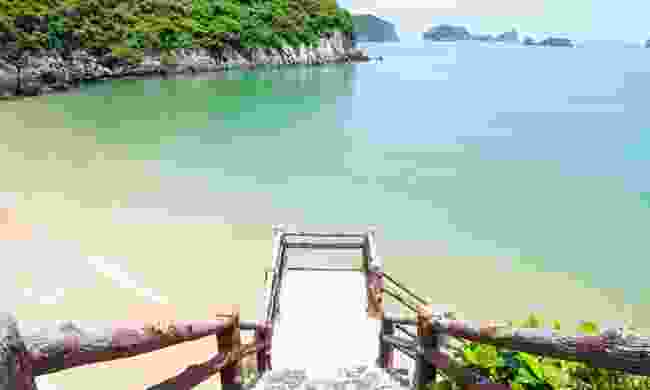 Follow the coastal path past the main harbour, and you’ll soon be on a winding walkway. In less than half an hour, you’ll come out at a squeaky-clean cove, protected by a horseshoe of karsts. This is the first of three stunning bays you can explore. Usually, the further you walk, the quieter they are.

The walk between the bays is an enjoyable one. A wooden staircase takes you on a trail around the cliff edges, where you can look down to see the deep blue frothing at the white sands, unspoilt by the masses. Once your preferred cove is chosen, you can relax on the sun-heated sands or submerge yourself in the water, perhaps bodysurfing alongside the locals.

Alternatively, hire a moped and twist and turn along the roads, taking you to further edges of the island. You could bag a beach way off the beaten track, and most likely have it all to yourself.

6. For its hiking opportunities 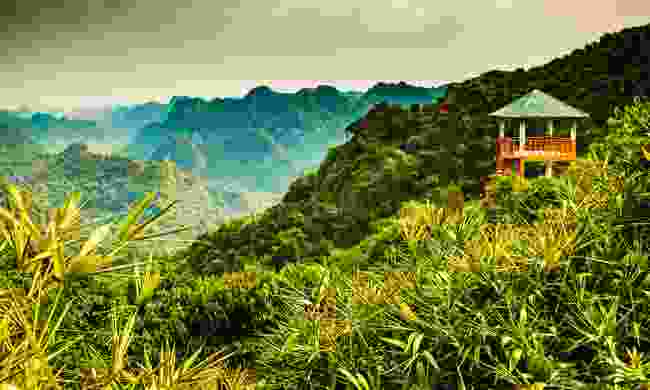 Walk just minutes from the main town of Cat Ba, and you’ll quickly realise that this is practically the only part of the island that has been built up. The rest of the outpost has been left largely untouched, so you can enjoy trekking through the pristine rainforest that makes up the vast national park.

The Lookout Tower Trail is a popular and fairly easy hike. Walk upwards for around an hour, until you come out at a rusted shelter, from where you can appreciate just how untouched Cat Ba really is.

If you want more, venture up a little further and you’ll break through the jungle canopy, where you’ll be eventually reach Ngu Lam Peak. Rest on a rock to catch your breath, while looking out over the jagged, green mountains that blur out into the distance.

For more of a challenge, book a guide and embark on the Cang Viet Hai Trail – an 18km, undulating trail that requires a good fitness level. Prepare to climb steep, slippery paths and scramble over thick knots of tree routes that block the path.

Highlights of the arduous trek include passing through a rustic rural village and seeing the mesmerising Frog Lake, where it’s hard to tell where the trees sprouting from its waters end and their reflections begin. 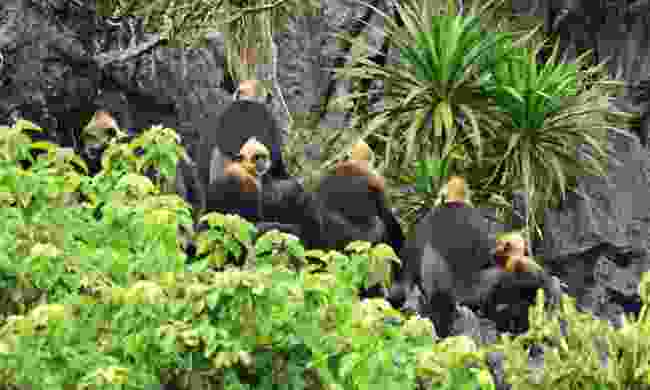 Increase your chances of seeing some incredibly rare wildlife in Cat Ba National Park by slowing down and looking around.

Birdwatchers will rejoice at the array of feathered animals displaying their colourful plumes. Look out for hawks, hornbills and cuckoos. Of the bigger residents, you’ll likely see squawking macaques and nervous deer. Look out for the alarmingly large tail of a black giant squirrel draped over a branch.

The true treasure of Cat Ba’s jungle however, and something you’ll be incredibly lucky to see, is the golden-headed langur. Also known as Cat Ba Langurs, there’s less than 100 of these primates left on the planet, and most of them live on the island. Look out for the glowing orange of their lion-like manes, perched on juts of rocks on the cliffsides.