Want a night to remember? From the wilds of Africa to the ice of Antarctica – here's where to spend an unforgettable night under canvas...

Camping in Alaska is the ultimate treat for the senses. Set up camp among mountains, waterfalls, glaciers, and more mountains – and take in a big lungful of that fresh, crisp air. Go kayaking, hike near quiet lakes with magnificent views of the sub-arctic tundra, try your hand at fishing for grayling. Keep an eye out for the locals, too: you'll likely encounter caribou, Dall sheep, marmots, innumerable birds, and – hopefully – even Orca whales. 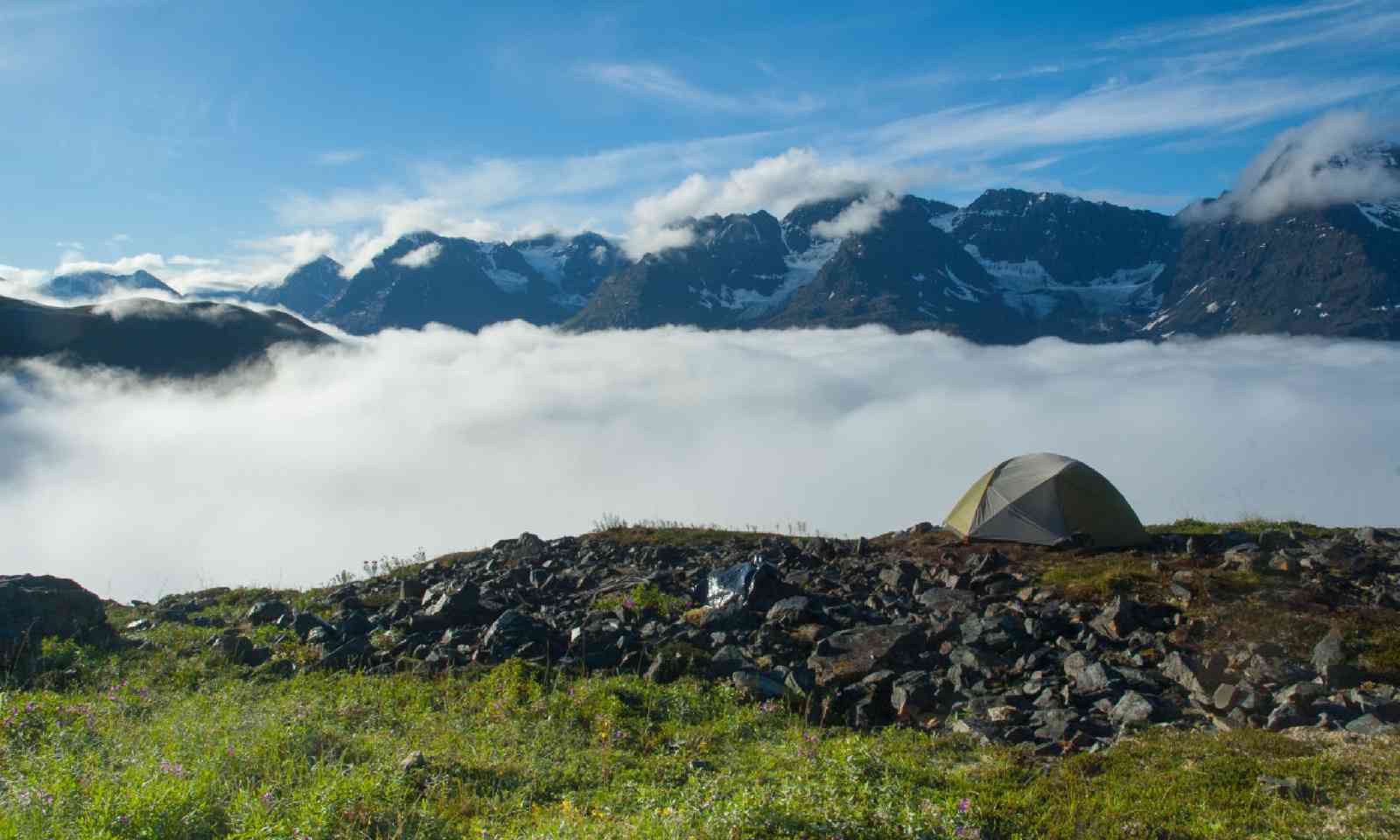 Really get into the Alaskan adventure with The Adventure Company, where you can view a dog sledding demonstration, try whale-watching and spend a night in a bush camp deep in the Alaskan wilderness. Or, simply enjoy the experience of camping in different nature reserves all around Alaska, with Grand American Adventures' Alaska Adventure, such as the Denali National Park and the riverside camp at Wrangell-St.Elias.

The fresh, pungent smell of pine hangs in the air, daring you to explore beyond the confines of your simple teepee shelter. Step outside to discover Bryce Canyon's gigantic jagged rock formations, their vermilion hues bright against the deep blue sky. According to  legend, the 250 million year-old rock formations were once the creatures of To-when-an-ung-wa, who were turned to stone by a tricksy coyote. Bryce Canyon's camp-site and surrounds are home to the rare Utah prairie dog, birds, foxes, as well as the occasional black bear. 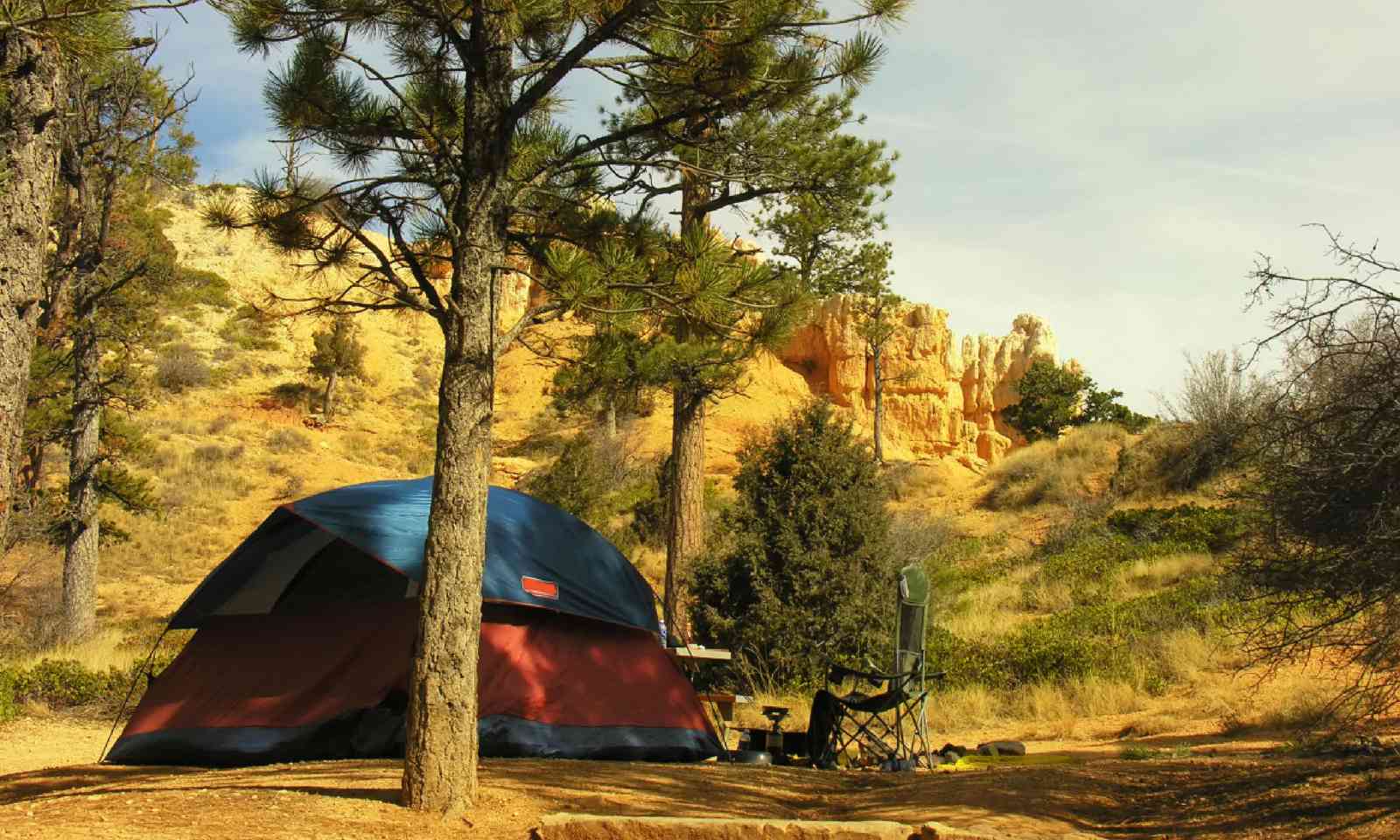 If spending a night in a teepee sounds like your cup of tea; check out Explore's 13-day Into the Wild trip, where you'll also be exploring the deserts and canyons of Utah and Arizona. If your prefer your own tent, you can join Intrepid's fortnight adventure from Las Vegas to San Francisco and walk across the salt flats of Death Valley.

Everything about this experience is intense: the density of the jungle, the clamour of the heat, the sounds of the wildlife hidden just out of sight. Under the rainforest canopy – so thick with foliage, it's like a giant emerald tent – you'll learn from your Amerindian guide about life in the jungle. Hear tales of the yajé vine, used to make ayahuasca, a drink with psychoactive properties used in shamanic rituals by the native tribes. By night, under canvas, you'll listen to the calls of the wild – Was that a toucan? A spider monkey? – and marvel at nature at its rawest. 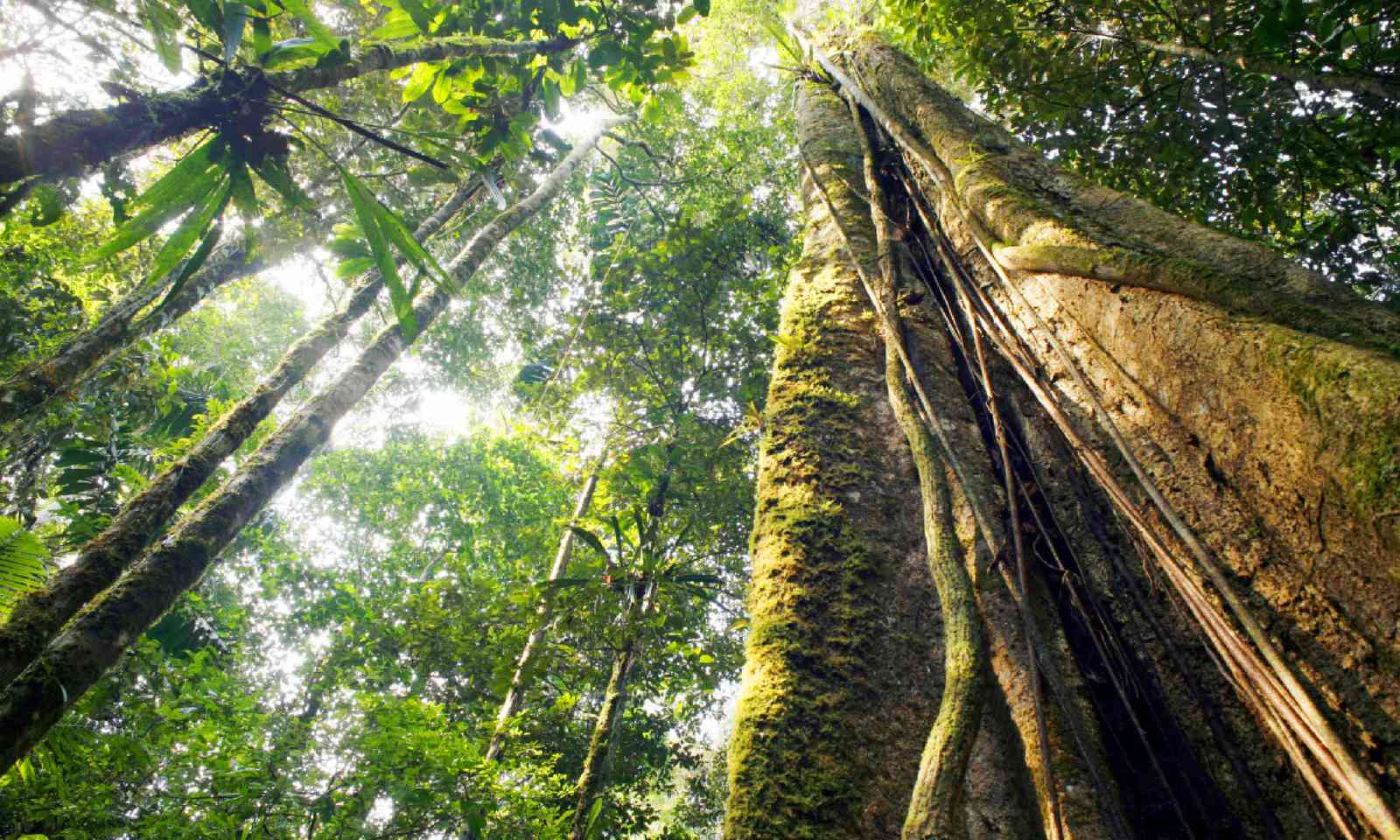 Intrepid offers the chance to camp in the Amazon on their 44-day trip from Rio de Janeiro to Lima. An equally epic trip is Oasis Overland's Quito to Buenos Aires adventure, which covers Ecuador, Banos, Peru, Arequipa, the Ica desert, Cuzco, Bolivia and Argentina – and includes camping in the Amazon.

Imagine someone crystallised the moon and then took a hammer to it, shattering its surface into millions of sparkling fragments of silvery-white, cast across a dark indigo sky. If you've ever wondered what the skies over Wadi Rum in Jordan look like, it's this.

At camp, underneath this twinking sky, a blazing fire burns, spitting out sparks of gold. Men and women, clothed in the long folds of their jalabiyya, dance and clap around the glow of the fire, and a curious Arabic melody fills the air. After a hearty meal cooked on the fire, you sleep in one of the Bedouin tents, breathing in the scent of sand and listening to the rustle of camels... 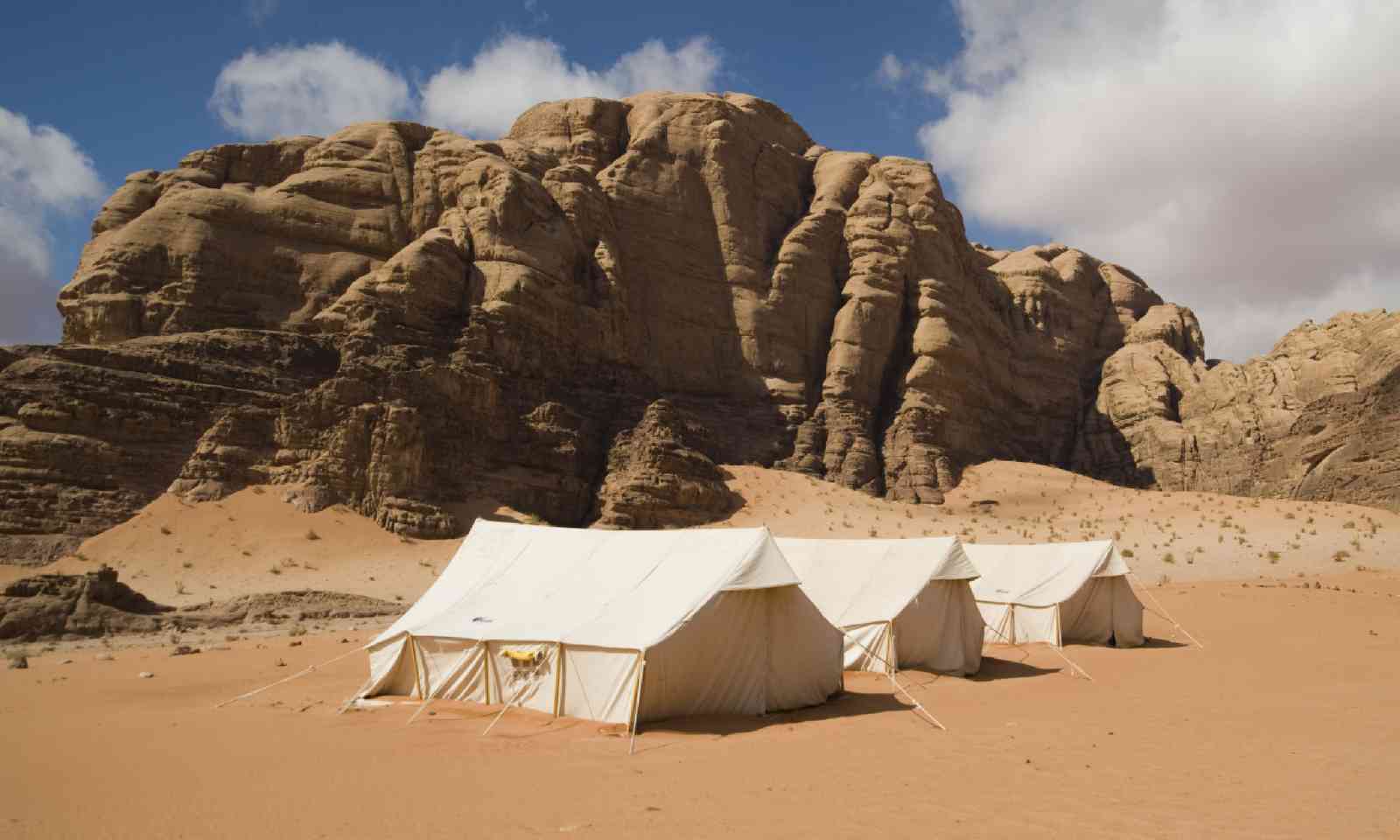 For this experience, see G Adventures' 8-day trip featuring the highlights of Jordan, including a night in a Bedouin tent. Camping in Wadi Rum is a great experience for children too; the Family Adventure Company offers a family-friendly trip, where you can share tea with Bedouin families and the children can learn to play typical Jordanian games.

The landscape may be wild, but this is a homely adventure: you'll sip fragrant, floral tea in a circular-shaped tent, protected against the elements outside. Thick carpets of every imaginable colour line the floor, and a small carved statuette of the Buddha sits on a low wooden table. This is your camp; a sturdy tent constructed from wood and wool known as a ger, the typical dwelling of Mongolia's nomads. Be aware: don't offend your hosts with an etiquette faux pas: see our guide to the ins and outs of ger life. 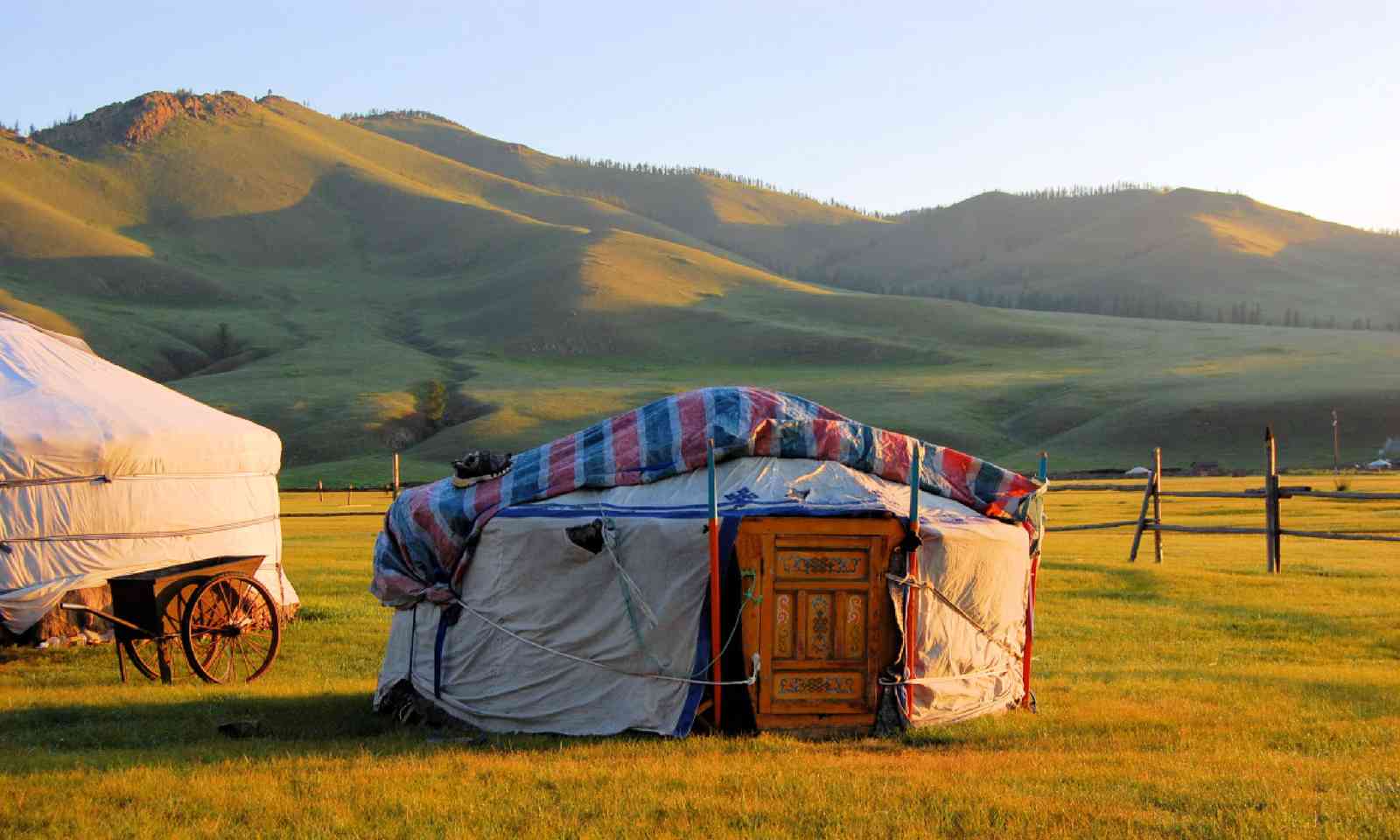 Spend the day tasting local dumplings, exploring alpine parks and ancient temple complexes with a 3-week trip offered by G Adventures; or take an alternative option with Exodus Travel's Cycling the Empire of Genghis Khan and wander around Mongolia on bike, riding along rivers, valleys, monasteries and mountains.

When you wake up at the crack of dawn (because you will) the intimidating rock formation known as Ayers rock will be standing at your feet. It is still dark, and you can see its maroon shape from your sleeping bag. As the sun starts to rise in the endless indigo skies, the age-old rock slowly begins to transform from a dark wine red, to a simmering scarlet. Uluru eventually becomes a single, immense ember, glowing as though it hides fire within. 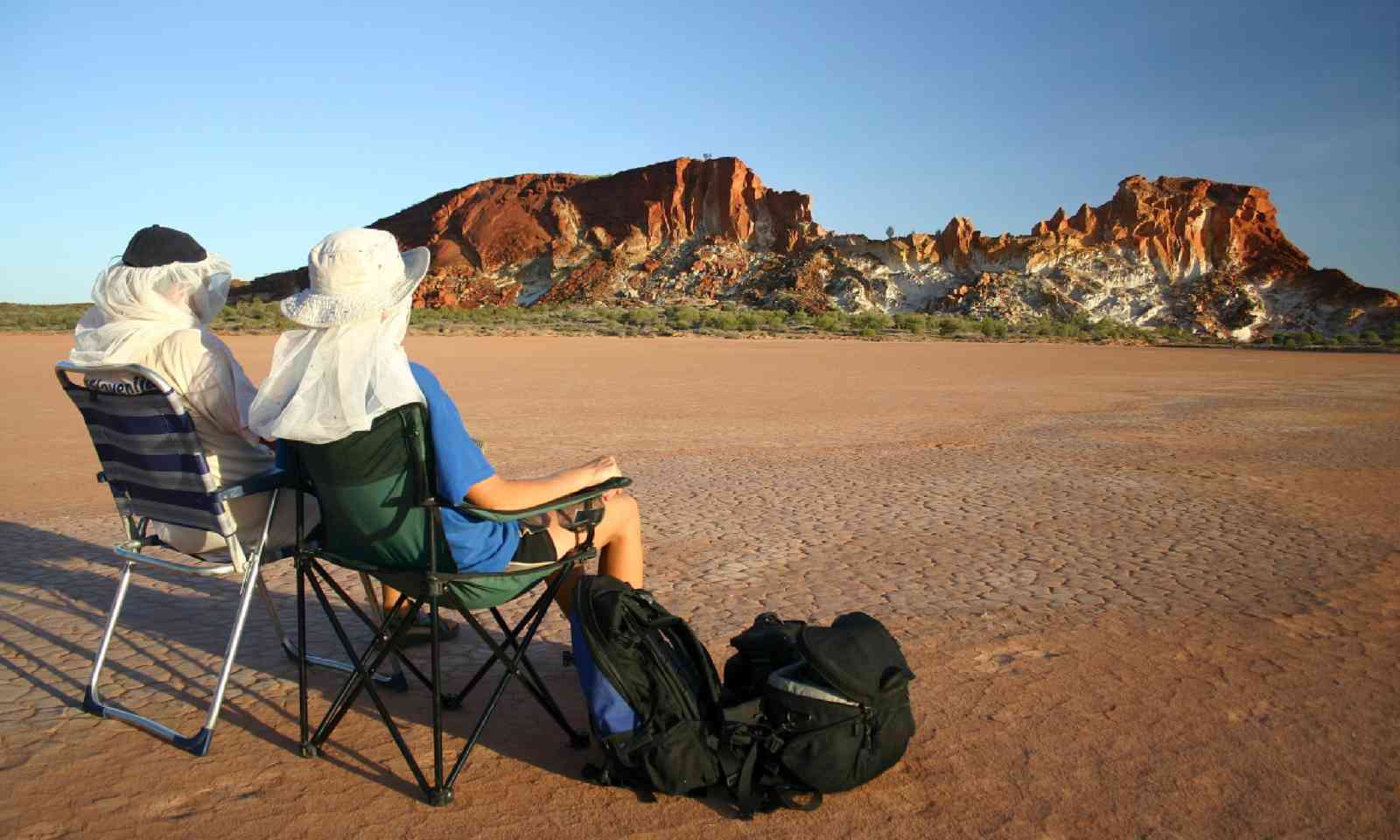 Sleep under the stars near the imposing Uluru with G Adventures' 8-day trip from Alice Springs to Adelaide or make it a weekend break with Intrepid's 3-day Rock the Centre trip where you'll also bivouac in the King's Canyon.

7. On Safari in East Africa

A beige canvas is all you have for a roof, and all that separates you from the African jungle outside. Yet, still it touches your ears, an organic symphony of sound composed of soprano shrills, squawks, cries, chirps and trills, a melodious cacophony played over that low hum omnipresent within all jungles, the bassline of distant animal calls. 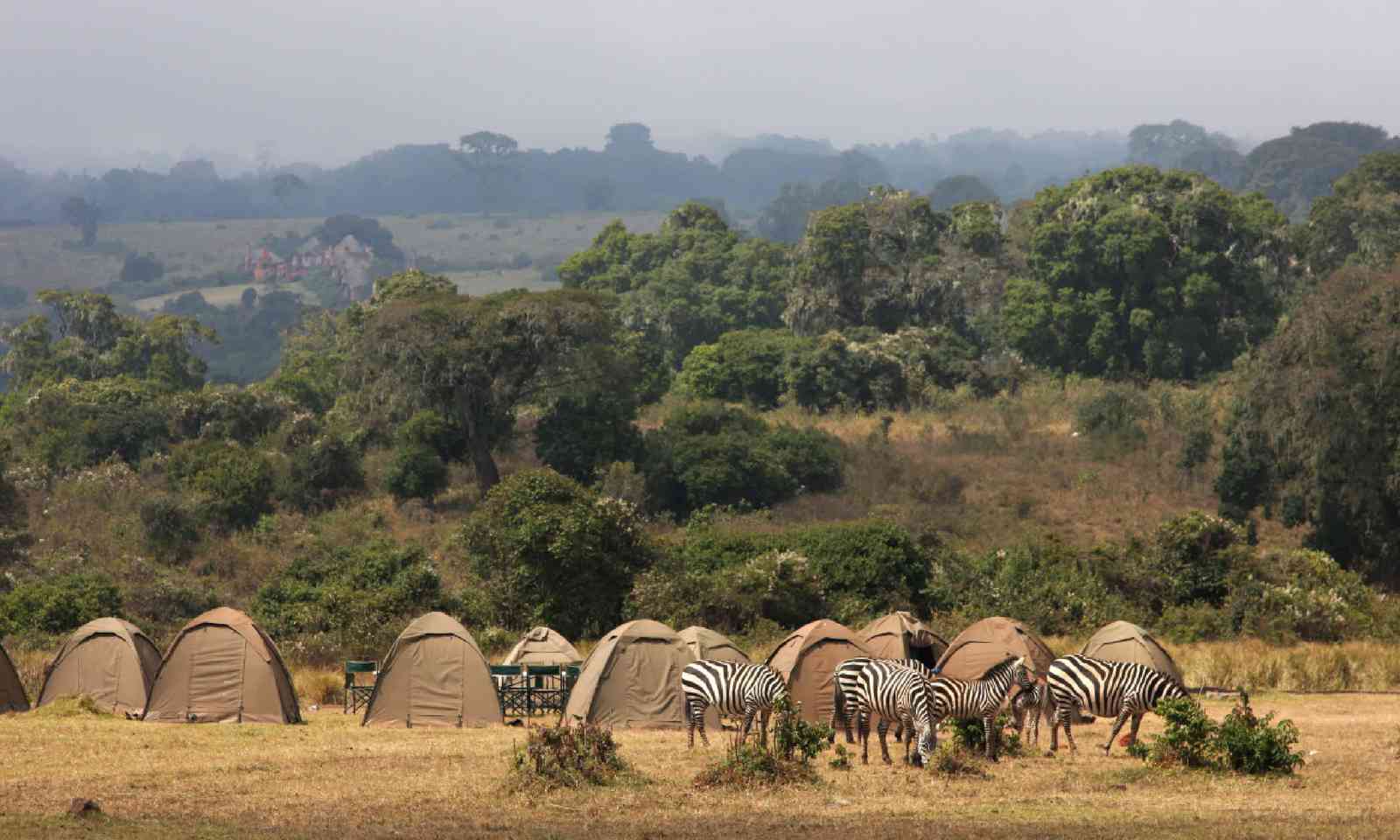 Camp in the midst of wildlife by staying in an actual gorilla park, offered by Absolute Africa or if you prefer a lakeside view, Tucan Travel offer gorilla treks based near Lake Bunyonyi.

Towering structures of ice encircle you, emitting a strange, yet peaceful, bluish white light. Your kayak skims over the still, icy water with your heart racing, pumping both from the physical effort of rowing and out of the sheer exhilaration of the scene that surrounds you. You land near a glacier, and this is where you set up camp; on one of the coldest, driest, windiest – yet most magical – regions of Earth. Cross the Antarctic Convergence with World Expeditions; and KE Adventure Travel also conduct photography workshops aboard the ship. On both trips you can go kayaking, mountaineering, and snow-shoeing, as well as up, close and personal with Antarctic wildlife.