11 of the world's most daring (or dangerous) selfie spots

From the packed Taj Mahal to the tall Trolltunga Rock, and the narrow walkways of Mount Hua, China - you'd definitely need to be brave to take on one of these locations for a quick picture... 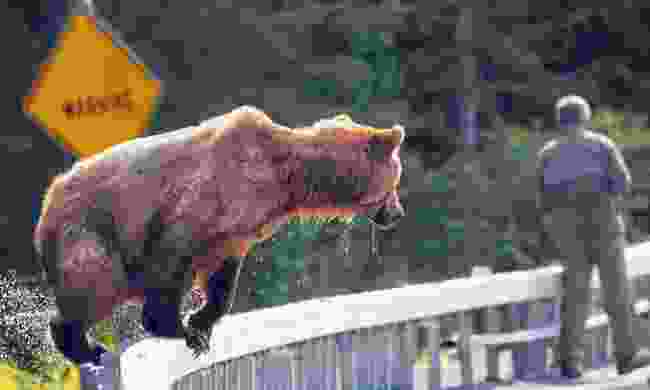 A brown bear appears near an unsuspecting man (Shutterstock)

National parks in the USA are struggling to cope with the impact of bear selfies, a craze that involves taking a selfie with a bear in the background. It has become so commonplace that officials in Sierra Nevada have issued a public safety warning.

Park officials say that it is not uncommon to see people rushing a group of bears to get a photo. While bear attacks are rare, they fear they will increase as bears feel under threat, especially if they have young cubs.

The situation got so bad at the Waterton Canyon in Colorado that officials closed the park to visitors.

"As far as they were concerned, it is a poor choice to A) get that close to wildlife and B) to turn your back on bears," said Park spokesman, Matt Robbins. 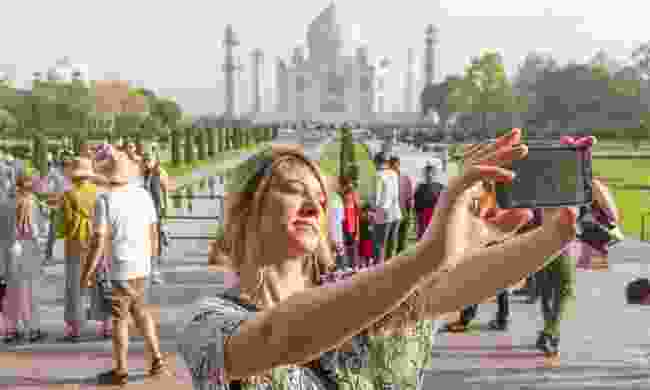 It’s not just wild animals and cliff faces that selfie takers need to watch out for. A Japanese tourist died after slipping on the stairs while taking a selfie at the Royal Gate at the Taj Mahal. Even the most benign tourist attractions can turn deadly if you don’t pay attention.

Indeed, India has the most selfie-related deaths in the world. In response, police in Mumbai recently declared 16 'no-selfie' zones across the city, with authorities warning that those who take selfies in risky areas would be fined. 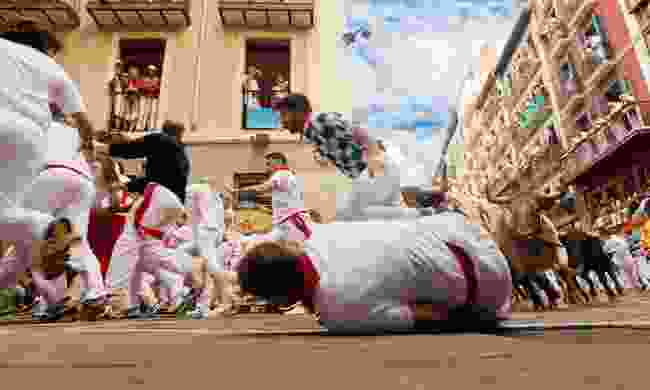 A runner falls in Pamplona (Shutterstock)

Running with the bulls during the San Fermin Festival in Pamplona is dangerous enough. But during the 2014 run, a participant was spotted trying to take a selfie.

Officials acted quickly and a new law has been passed where people can be fined over €4,000 if they get caught trying take a selfie with a bull during the famous event.

The new law came in too late for a 32-year-old Spanish man at a similar event in Villaseca de la Sagra. He left the spectator area to get a selfie with the charging bulls and was gored, dying in hospital from his wounds a few hours later. 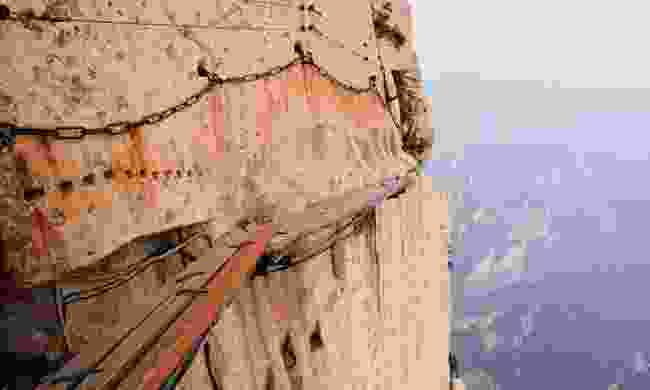 The walkway on Mount Hua (Shutterstock.com)

No doubt you’ve seen pictures of Mount Hua’s notorious wooden walkway – basically a series of planks of wood perched on the side of a 7,087-foot-highcliff.

So has everyone else on Instagram, and now it has become the place to take a selfie when visiting this part of China.

The mountain is one of five sacred peaks in the Shaanxi province, and while the rickety paths have been reinforced to accommodate the increasing number of tourists, it is still dangerous. Chinese officials are tight-lipped about the number of accidents, but locals suggest it is well over 100. 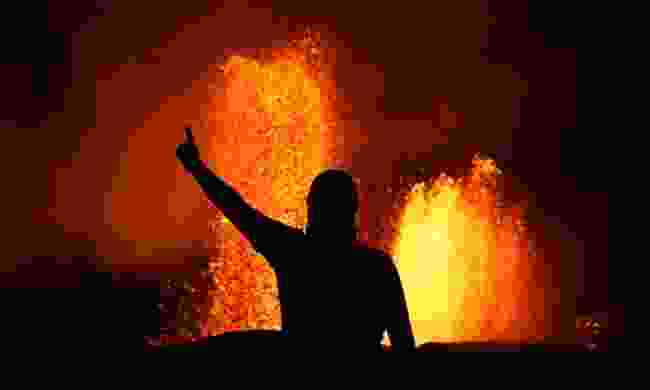 The recent eruption of Mount Kilauea in Hawaii drew attention to another dangerous social media obsession, the volcanic selfie.

As one of the most active volcanoes in the Hawaiian Islands, the glowing slopes of Kilauea have long drawn curious crowds. Many snapped selfies with the relatively benign lines of slow-moving lava. When it began erupting, the danger levels skyrocketed.

Local police set up roadblocks to deter photographers, and when that didn’t work, started arresting and fining people as well. Not to be deterred, people took to the seas.

The lava from Kīlauea flowed into the ocean at three different point, with hundreds of pleasure craft jostled for position for the perfect shot. Boats clattered into each other, with many getting dangerously close to the lava. 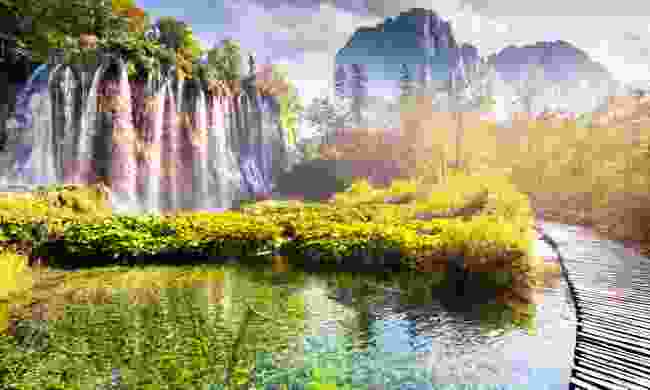 Compared to some of the world’s mightiest waterfalls, such as Victoria Falls and Niagara Falls, the famous cascades at Plitvice Lakes National Park look relatively innocuous. Still, that hasn’t stopped visitors from taking unnecessary risks to liven up their Instagram feed.

In 2015, a Slovakian tourist fell to her death trying to take a selfie. And a year later, a Canadian visitor had a lucky escape when a branch broke his fall as he tumbled 246 feet from a viewpoint, doing the same thing. 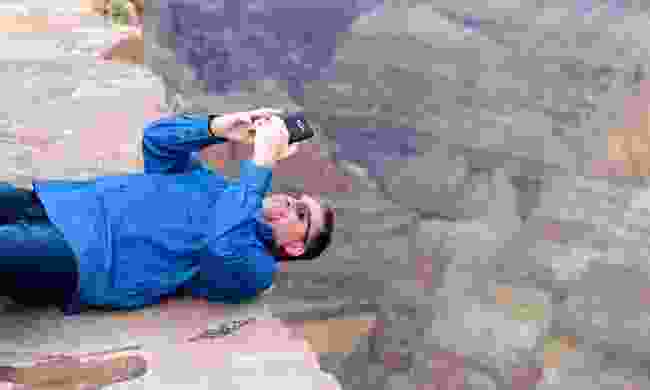 The Grand Canyon has had a long and deadly history, with over 770 people losing their lives there since records began.

A recent tragedy saw a woman fall off a cliff while posing with her hiking buddies. There are no railing or safety barriers, and it is estimated 12 deaths occur every year.

It is hoped that the new Grand Canyon Skywalk at Eagle Point will offer compulsive selfie takers the chance to get breathtaking shots without putting their lives at risk.

The horseshoe-shaped cantilever bridge with a glass walkway, hangs off the side of the cliff, providing dramatic vistas but without the danger. 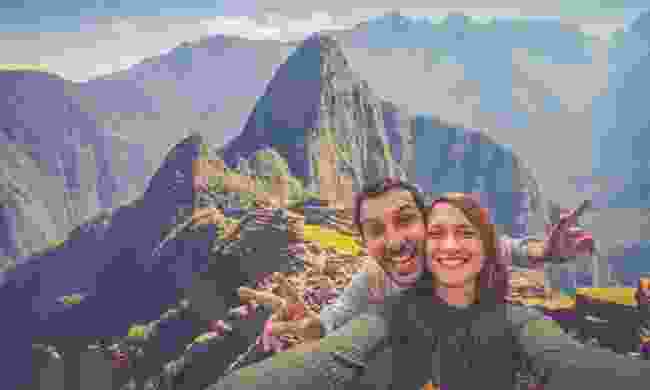 Footing is rarely 100% secure at the Incan ruins of Machu Picchu in Peru. The ancients stone steps have been worn by centuries of footfall and the high altitude means that they are often slick from the mist.

Add in one of the most iconic vistas in the world and you have a recipe for selfie-taking disaster.

The increased popularity of ‘flying selfies’, taken by drones, has added another element of danger into the mix.

A couple of years ago a German tourist ignored the safety warnings at Machu Picchu, got distracted by controlling his drone and plunged 100 metres to his death. 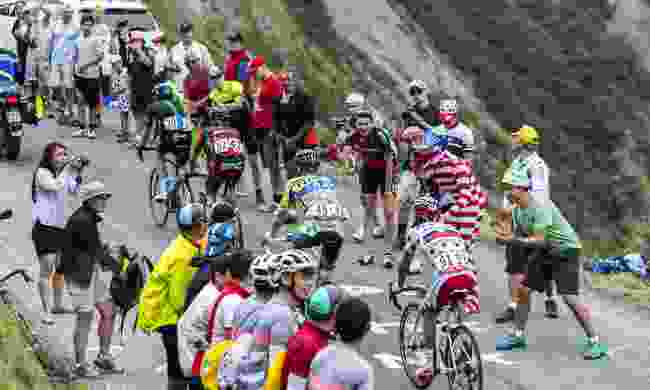 Every year hundreds of thousands of fans line the route of the Tour de France to cheer on their heroes, getting caught up in the excitement of the world’s most famous cycle race.

Many congregate on the road itself, and over the years, fans have been hit, injuring both themselves and the unfortunate cyclist involved.

The rise of the selfie has seen the number of accidents increase tenfold. Fans are now turning their backs to the cyclists to get a shot, distorting their eyeliner and decreasing their reaction times for getting out of the way.

These days, it seems riders are constantly crashing into fans or knocking into other riders in their desperation as they try to avoid an accident. 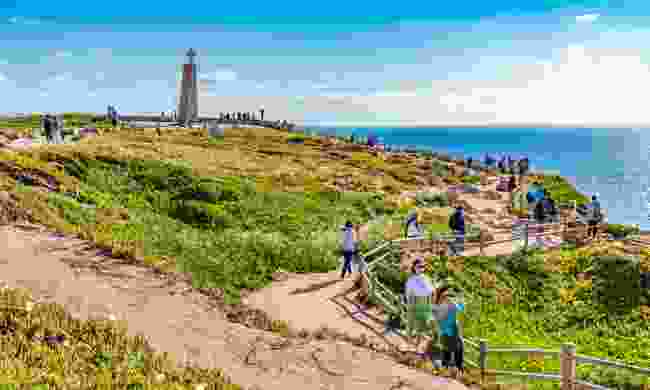 Cabo da Roca is the westernmost point of mainland Portugal and part of the Sintra-Cascais Natural Park, 42 kilometres from Lisbon.

With its high, rocky cliffs and expansive ocean views, it has long been a magnet for selfie shots for both locals and visitors alike.

There is a rudimentary wooden barrier, marking the point beyond which visitors shouldn’t venture. But that hasn’t stopped foolhardy folk ignoring it in pursuit of a better shot.

In 2014, a couple fell to their deaths taking a selfie here. Ironically, they had told their two children, who were five and six years old at the time, to stay back behind the barrier because it was too dangerous. 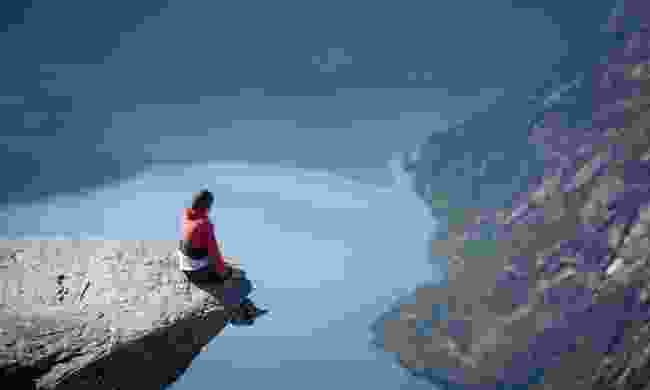 Trolltunga (or Troll’s tongue) is one of Norway’s ‘Big Three’ selfie spots, a slab of stone protruding out above the spectacular fjords.

Like the jammed boulder at Kjeragbolten and the stone platform at Pulpit Rock, Norway's two other selfie spots, there is nothing to stop careless selfie-takers from plunging to a grizzly death below.

The real danger, however, comes from the popularity of each spot, with hundreds of people jostling to get that ‘must-have’ selfie for their social media timeline.

That’s what saw a young Australian tourist plunge to her death at Trolltunga recently. Although initial reports suggested she was taking a selfie at the time, her family subsequently said she was trying to get past other people posing for photographs.

Phoebe Smith travelled to Norway to investigate the selfie phenomenon there. You’ll find a video of her findings below...

The 6 most dangerous roads in the world

How to be wary of the world's fiercest animals

How to avoid hidden dangers when travelling