It's one of the world's biggest airports and a hub for most passengers flying to and from the UK and Europe. Here's how to navigate Heathrow Airport - for a painless and simple journey

Heathrow Airport is colossal. It spans 1,227 hectares and consists of five terminals, and saw 72.3 million people pass through its doors in 2013. It was a record-breaking year for Heathrow: on its busiest day, 238,949 passengers arrived and departed. Heathrow's two runways see an average of 1,286 flights land and leave every day, as 82 airlines serve 180 destinations in 85 countries.


Post boxes can be found before and after security in every terminal. Stamps can also be purchased in all terminals from branches of WH Smith and stamp machines.

All Heathrow passengers are entitled to 45 minutes of free Wi-Fi: choose _Heathrow Wi-Fi and follow the instructions. If you're a member of Heathrow Rewards you can access 90 minutes for free. The airport also offers pay-as-you go Wi-Fi after you've used your allotted free time: £3 for up to an hour, £5 for three hours, £9 for midnight to midnight access, £70 for six months and £130 for one year's access.

Stay & Play facilities (for children aged up to nine years old) are located in Terminals 1, 2, 4 and 5. Open daily from 6am-9pm, these soft play areas are a perfect tool for keeping your little nippers occupied during long airport waits.

All play facilities are located in the departure lounges, after security.

If you're transferring between flights at Heathrow, find out what will happen to your baggage. Often, your luggage will be checked through to your final destination and you won’t need to touch it at Heathrow – but some airlines and flights don't offer this service. Also, if you booked your flights separately (or on separate airlines), you'll have to retrieve your bags and check them in again.

Flight transfers will often require a dash between terminals. Heathrow is well set up for this, with excellent signposting and helpful staff, but be warned: the airport is vast. Use this official guide to help plan your transfer time.

There is nowhere to sleep inside the airport, but there are plenty of options if you need to rest your head before, between, or after your flights.

T3's No.1 Traveller Lounge (in the departure lounge, after security) offers bedrooms for daytime use. Rooms can be booked for two hours or more; opening hours are 4:30am-10:30pm.

Opened in 1968 and later redeveloped in 2005, Terminal 1 is Heathrow's main base for domestic flights, as well as a smaller number of European short-haul and long-haul flights. Roughly 14 million passengers pass through Terminal 1 every year. Heathrow plans to demolish T1 in 2016, and expand T2 over the current T1 site.

Airlines: The majority of airlines based in T1 are moving to Heathrow's swanky new T2. The relocations should be completed by the end of 2014. A full list of the changes can be found here.

I'm bored... T1 has an array of shops and 12 restaurants and bars for you to while away the hours. For great views of the arrivals and departures, head to The Tin Goose or Caffe Nero, which are both situated after security in the departures lounge.

Many of Heathrow's eateries offer a selection of restaurants that produce 15-minute menus – a guarantee that your food will ready within 15 minutes of ordering. Bridge Bar, Caffe Nero, Caviar House & Prunier Seafood Bar, giraffe, Harlequin Alehouse & Eatery, Pret A Manger, The Skylark and The Tin Goose all offer an assortment of 15-minute menus in T1.

I want to escape... You can relax in peace (with complimentary drinks, snacks and Wi-Fi) for £17.99 per person (£14.99 per child) in the Servisair Executive Lounge. The lounge is located after security, to the far right of the departures lounge.

Baggage storage...  All five terminals have locations for you to store your baggage. Prices are the same throughout the airport: £5 per item for 0-2 hours, increasing to £10 per item for 2-24 hours. For every further 24 hours, a cost of £5 per item will be charged. In T1, you'll find space to leave your baggage on the ground floor, near the lifts for Heathrow Express. It's open 6am-11pm.

Heathrow's stylish new £2.5bn Terminal 2 opened in June 2014, and is now capable of handling 20 million passengers a year. When T1 is demolished in 2016, T2 will become Heathrow's primary terminal.

Airlines: By the end of 2014, 26 airlines will have relocated to T2. This will include 23 members of Star Alliance plus Aer Lingus, Germanwings and Virgin Atlantic Little Red. Once the moves have been completed, T2 will see 332 daily flights to 54 global destinations.

I'm bored... The Queen's Terminal is home to 28 stores, including an airport debut for John Lewis. T2 also has a selection of 14 bars and restaurants, 11 of which offer 15-minute menus.

I want to escape... The brand new Plaza Premium Lounge boasts shower rooms, en-suite bedrooms, a spa and a range of complimentary food and drink. The lounge also provides Wi-Fi, international magazines and televisions. Entrance to the lounge costs £38 for two hours.

Baggage storage... Open 5.30am-10pm, T2's luggage storage facilities can be found on the arrivals level on the ground floor.

Terminal 3 may be Heathrow's oldest terminal, but this 1960s creation – mainly home to long-haul airlines – has an average 18.4 million passengers pass through every year. Got a last-minute postcard to send? T3 is home to Heathrow Airport's only Post Office, located just before security at departures. It's open Monday to Saturday 9am-5.30pm and 9am-1pm Sundays.

I'm bored... T3 has 19 restaurants and bars for you to pick from. Bridge Bar, Caviar House & Prunier Seafood Bar, Oriel French Restaurant and Bar, Pret A Manger, “rhubarb”, Strada, The Three Bells and Yo! Sushi all offer a selection of 15-minute menus. Once suitably refuelled, explore T3's 41 outlets for an airport bargain or maybe even a luxury pre-flight treat.

Children eat for free at... The Bridge Bar (located to the right of the departure lounge opposite Harrods); Oriel French Restaurant and Bar (behind the Harrods outlet); and “rhubarb” (next to World Duty Free).  The offer is available 14 July-1 September 2014, 23 October-2 November 2014, 12 December-4 January 2015.

I want to escape... Two lounges can be found in T3. Like T1, T3 is home to a Servisair Lounge (£17.99 per person). The No.1 Traveller Lounge is the pricer option at £30 per person (£15 per child). Here you can pass the time with runway views, complimentary food and drink, and a cinema. The lounge also includes a spa, showers, bedrooms and a family room.

Located on the southern edge of Heathrow, Terminal 4 is mainly used for long-haul and European flights. The terminal is Heathrow's smallest in terms of passenger numbers (a yearly average of 60,109 flights).

I want to escape... The Be Relax Spa offers a range of treatments designed to get your trip off to a peaceful start..

T4 is a short walk from the four-star Hilton Heathrow.  Alternatively, YOTEL cabin hotel, which has 32 Japanese-inspired cabins, is located before security. Prices start from £35 for four hours and increase to £56 if you plan an overnight stay.

I'm bored... The View Heathrow Observation Desk treats visitors to a 270-degree view of Heathrow's runways. It's located between gates 15 and 16, just 250 metres from the southern runway.

T4 is also home to a vast number of designer stores, from Gucci to Bulgari. You will also find 11 bars and restaurants, nine of which offer 15-minute menus.

Children eat for free at... The Bridge Bar (located to the right of departures next to WH Smith), and Dining Street Restaurant (to the left of the departure lounge, opposite Boots). This offer runs 4 July-1 September 2014, 23 October-2 November 2014, 12 December-4 January 2015.

Baggage storage... Baggage can be stored in the west section of T4's arrival halls. Open 5.30am-11pm. 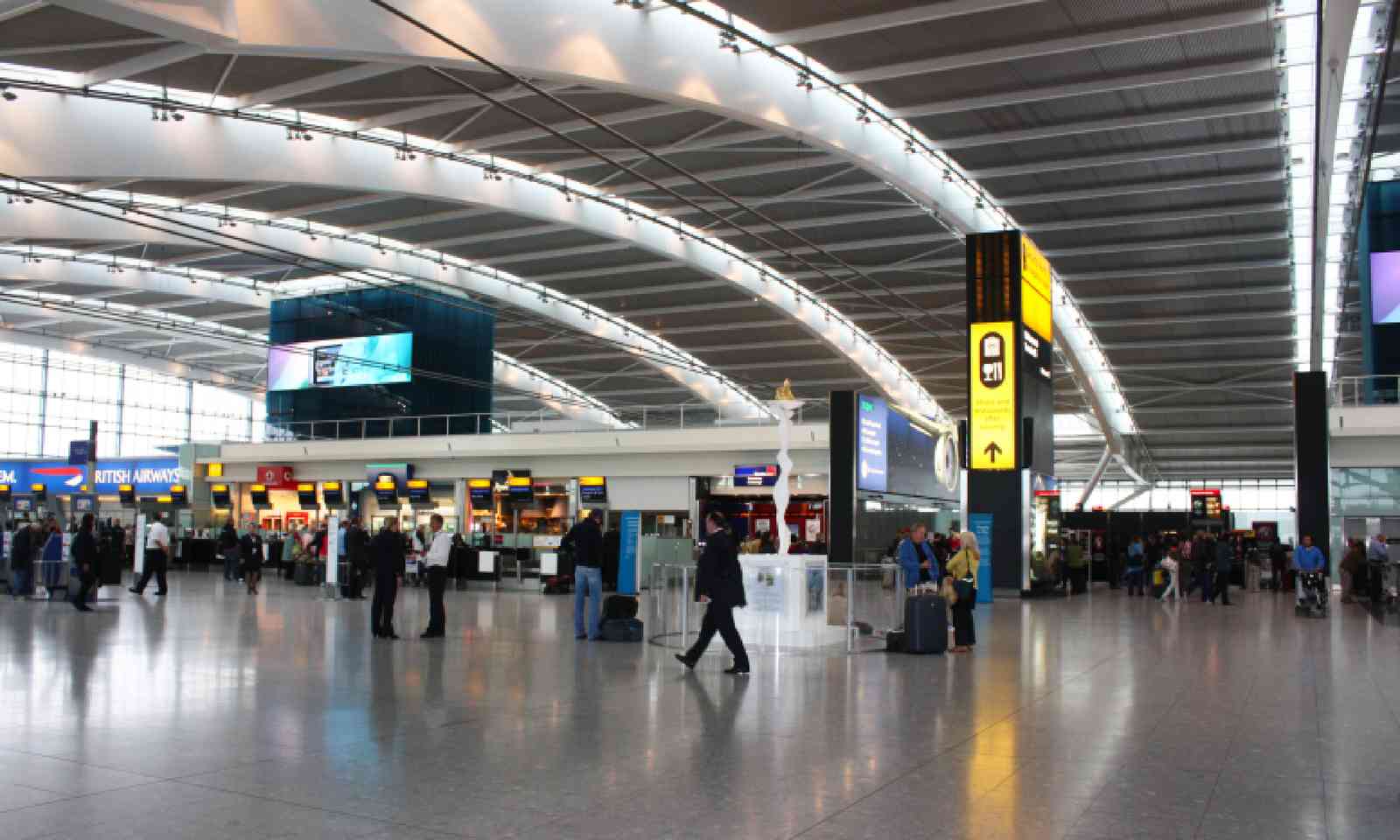 Terminal 5 has risen out of the ashes of its shambolic opening to become one of the best terminals in the world today. Opened in 2008, it saw 30 million passengers pass through its doors in 2013.

I want to escape... Away from the shops and eateries, T5 is home to an award-winning art gallery. Open 8am-8pm every day, the gallery hosts a range of exhibitions throughout the year, championing established and up-and-coming artists.

Baggage storage... Baggage can be stored on the ground level near UK arrivals. Open 5.30am-11pm. T5 also has a lost property office which is situated in the arrivals hall by domestic arrivals.