The 7 wonders of Wales

A lot has changed since an 18th century traveller penned a poem that decided the seven wonders of Wales, but the beauty and appeal of these Welsh landmarks has stood the test of time...

What are the seven wonders of Wales?

The seven wonders of Wales are based on an anonymous rhyme, penned in the 18th century. The four-lined poem simply lists places in north Wales. Read the full poem below... 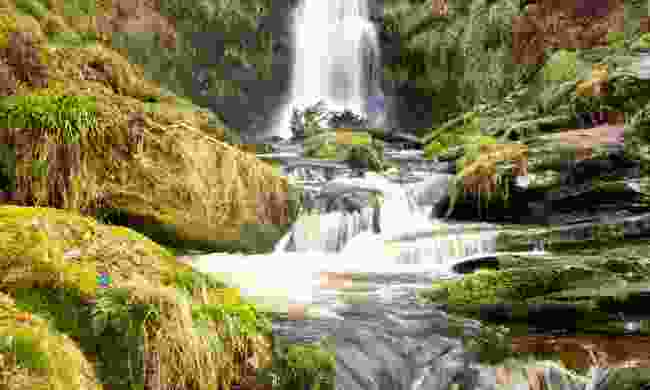 Read on for more information on each of the wonders mentioned in the rhyme... 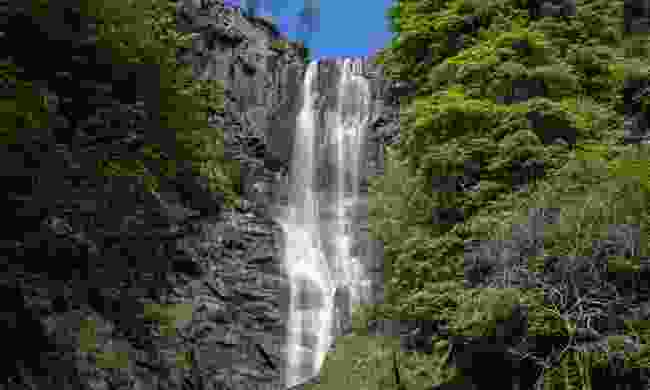 Not only is Pistyll Rhaeadr the tallest waterfall in the UK, but it's considerably higher than Niagra Falls, at a staggering 240 feet tall.

Look up at the top in awe as the water gushes down the side of the jagged face of the Berwyn Mountains, splashing the deep green foliage on either side. It then runs through another two tiers, crashing under rock-carved bridges and burrowing its way around beautiful natural scenery.

To get there, start in the village of Llanrhaeadr ym Mochnant and take the aptly-named Waterfall Street, which in four miles will bring you to the bottom of this wonder. Another 20 minutes will take you up to the top, where you’ll get a true sense of the height of Pistyll Rhaeadr, and be able to enjoy views of the surrounding mountains rolling out beneath you. 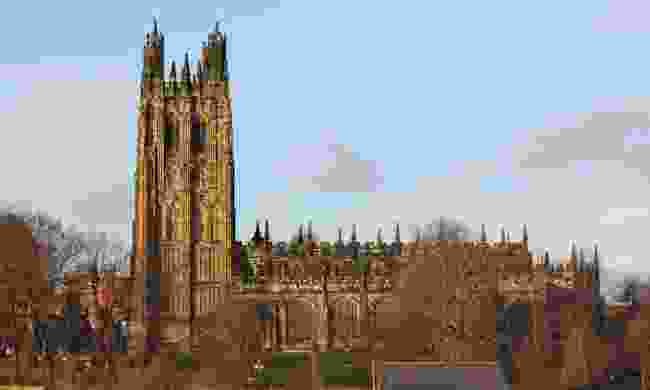 The next mentioned in the poem is Wrexham Steeple, which is, in fact, not a steeple at all. It's a tower. But don’t let this put you off – at over 130 feet high, the views from the top of the tower are truly wonderful. Head to the town of Wrexham to find the beautiful St Giles Church poking out above the surrounding trees.

It’s within the church grounds you’ll find the 15th century tower or ‘steeple’. Climb to the top and look east to see the roofs of houses hidden in the valley. Turn around for stunning views out over the mountains, and look down to see modern day life bustling past on the streets below.

Don’t leave without a wander around the town. With its historic buildings, cobbled streets, and the well-kept gardens of Erddig Hall, you don’t want to miss out on the old-town charm of Wrexham. 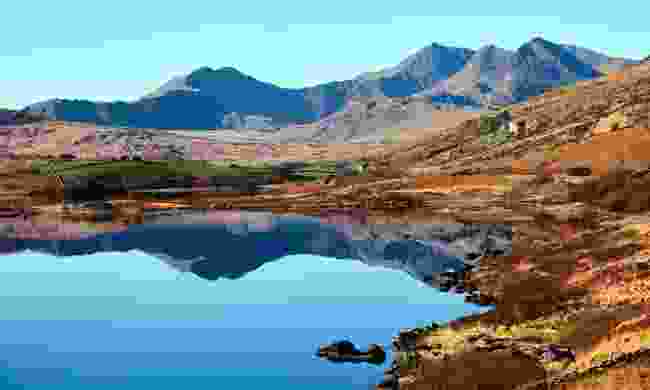 Snowdon reflected in Llynnau Lake. The tallest mountain in Wales and England is one of the seven wonders of Wales (Dreamstime)

The most famous of the seven wonders is undoubtedly Snowdon, the highest peak in Snowdonia National Park and in all of Wales and England. The effort it takes to climb the more than 1,000m high peak is worth it for the verdant views of numerous other mountain tops stretching out into the distance, in every direction.

There’s six ways up, varying in difficulty. The easiest of these – Llanberis Path — also happens to be the longest. Take the winding pony track to the top, pausing to appreciate views of the clear lakes. Feel spurred on by the ever-improving mountain views the higher up you get.

Or opt for a more challenging route such as The Watkin Path. This is less popular than Llanberis, but much more scenic, passing through ancient woodlands, winding past a waterfall and leaving you in a prime position to appreciate views from Bwlch Ciliau. 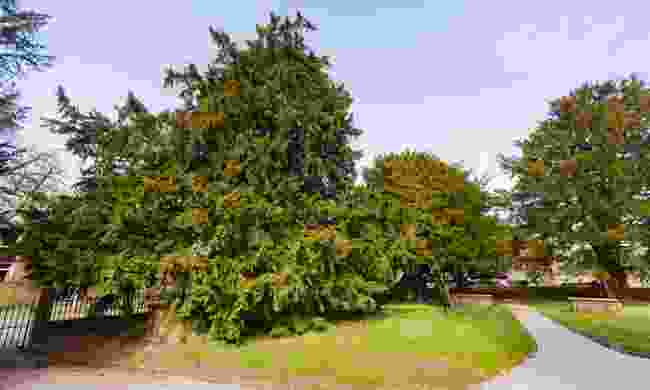 Head to the small village of Overton-on-Dee, a stone’s throw away from Wrexham town, to see not one but over 20 wonders standing in a circle in the churchyard of St Mary the Virgin.

These yew trees are not just decorative. In fact, some of the yews are so ancient they pre-date the church itself and have been standing strong in the same spot for thousands of years. 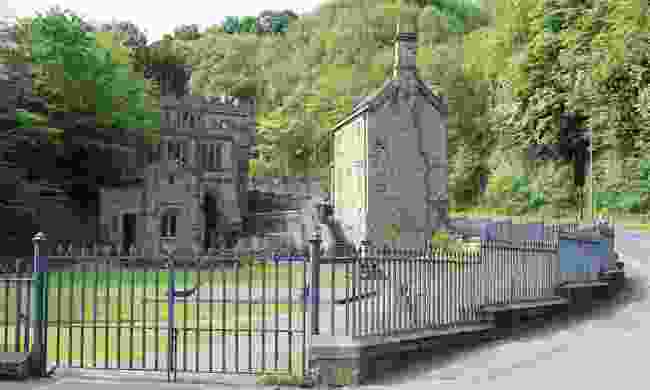 St Winefride's Well is a very significant pilgrimage site, and also one of the seven wonders of Wales (Dreamstime)

As a very significant pilgrimage site, people have been journeying to this wonderful Welsh well for more than 1,300 years. The story goes that St Winefride ran from her seducer, who then caught up with her and cut off her head. A spring came up where her head fell. She was then brought back to life by her uncle, St. Beuno.

Many visitors flock to the site to seek healing in the waters of the well, believing it can cure sickness and infirmity. The site is definitely fit for a King, and the well has had many royal visitors over the years, including Richard I the Lionheart in 1189.

After you’ve seen the sacred well, explore more of the site. The surrounding gardens are worth a walk and you can learn more details of the story of St Winefride inside the museum. 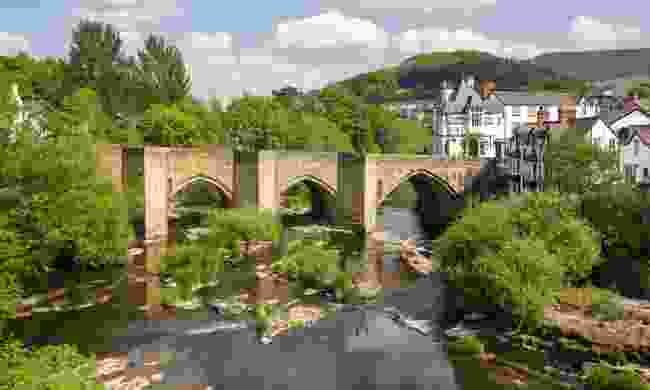 The beautiful medieval Llangollen bridge, one of the wonders of Wales (Dreamstime)

This medieval bridge in Llangollen stretches across the River Dee with three charming arches, allowing the water to rush under it and nature to grow around it. It connects the equally charming black-bordered white houses on both sides of the bank.

This really is a postcard-perfect setting. But it doesn’t end at the bridge. Follow the Dee up to the riverbank-hugging houses of the town of Llangollen. If the sun’s shining, you can easily convince yourself that you’re in a rural Italian village, rather than northern Wales. 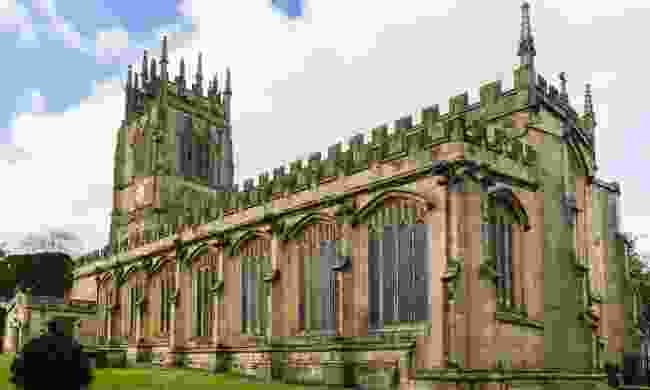 Also located in the borough of Wrexham, Gresford’s All Saints Church is home to the last of the rhymes wonders: the bells. These ancient wonders can be found at the top of a stone staircase in the tower. But the point isn’t to see them, it’s to hear them.

Visit the church on a Monday late afternoon to enjoy the sound of the Gresford Handbell Ringers practising on the bells. Marvel at the thought that some of these are the very same ones that have been ringing out over Gresford since the late 1700s.

Here's some more adventures to be had in Snowdonia

Why not explore Wales on one of these road trips?

Here's the highlights of Wales' hills