Islay: The Queen of the Hebrides

Whisky, walking, wilderness and some more whisky thrown in for good measure. We visit the Inner Hebrides to enjoy the taste of Scotland

This is a ‘what a time to be on the planet, in this room, right now’ type of whisky,” beamed Ron, the head tour guide at Ardbeg. Despite the ravages of the pandemic I agreed with Ron; not just on the 45-year-old dram. This was, and is, a special time to be at my favourite Islay distillery, the whitewashed dame that has stood firm against the Atlantic since Queen Victoria was on the throne. It was and is a special time to be on Islay too, a life affirming oasis; a safe port, even, in the Covid-19 storm.

I’ve long had a special place in my heart for the ‘Queen of the Hebrides’. It’s hard not to fall for an isle alive with sweeping beaches, epic seafood and no fewer than nine whisky distilleries; Islay is a real life treasure island. This time, though, it was not mere sightseeing I sought, but an escape from the maelstrom of the pandemic. I’d taken five days out of the confines of my home office, but could Islay work her magic so quickly in this most surreal of times? 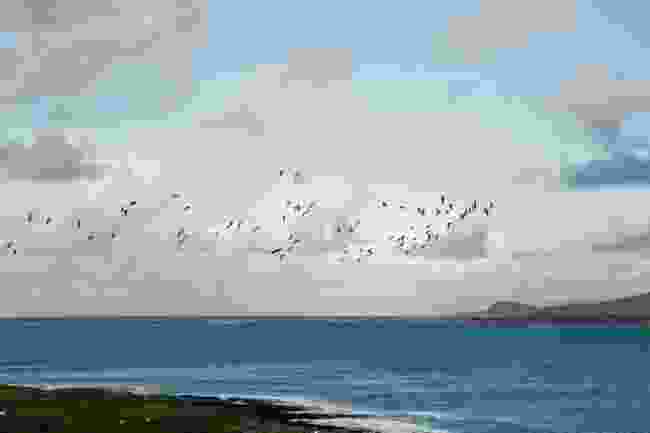 I was in good company flying to Islay. There may have been only five passengers on our Loganair Saab 340, but over autumn and winter thousands of pairs of geese flock here to escape the worst ravages of winter. Indeed 60 per cent of the world’s barnacle geese and a quarter of its endangered Greenland white-fronted geese seek sanctuary on Islay.

This may be northern Europe, but the Gulf Stream ensures the mercury rarely dips too low and snow is rare. My traditional autumn Canary Isles escape had been quarantined off, but on this early morning flight, as Islay seared into view in the peach-tinged light, its sandy shores wrapped around low hills and gnarly bays, the island already felt much more than a substitute.

Islay may currently be pleasantly devoid of the crowds, but it’s no backwater as local taxi driver Hughie Currie was quick to point out. “Islay was the centre of the isles for centuries and we’ve not forgotten those days,” he said with a quiet smile and hint of cheekiness in his eyes; a look you get often on Islay.

Hughie was right though. The mystical Lords of the Isles, the MacDonalds, held sway over huge swathes of the Hebrides from Finlaggan, their Islay stronghold until James IV’s ascension to the Scottish throne in the 15th century. Today Prince Charles holds the title of Lord of the Isles.

We made for Finlaggan to delve further. The first time I came I was disappointed: I’d been expecting a sturdy fortress and boastful battlements. That is not Islay’s style. So powerful were the Lords that they didn’t need to fortify Finlaggan. As we eased out to the wee island that houses the epicentre of their world, the centuries slipped back to when they sipped claret here as they surveyed their expansive empire. It’s an arresting spot, borrowing its implausibly dramatic backdrop – the legendary Paps of Jura – from the neighbouring island of Jura. We were the only people here and the only sound, high above, was those relieved geese enjoying their seasonal sojourns. 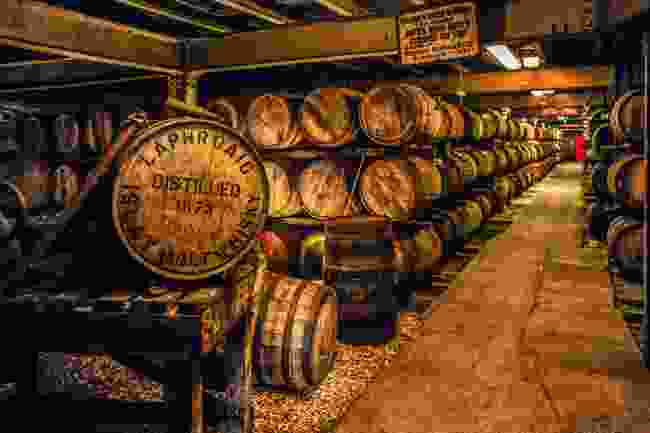 Hughie’s taxi proved an ideal way to explore the distilleries over a couple of days, although the island has tried to make visiting eco-friendly too with a footpath/cycle track connecting the southern trio of Ardbeg, Lagavulin and Laphroaig. The distilleries are on the ball with Covid-19 as I found at Bunnahabhain, where they took my temperature before I was allowed into their bonded warehouse.

I found my guide David swathed in thousands of litres of whisky and over 130 years of tradition. He charmed me through a tasting where the craic flowed as freely as the fine malts. “There is a dram for everyone, literally, whether you like wine, port or sherry,” he enthused as we enjoyed our merry dance.

But two distilleries in particular struck me in these testing times. Ardnahoe is the no-expenses-spared new kid on the block, a literal breath of fresh air: I stood on their terrace gazing out over the Sound of Islay. “You can see seals and dolphins out there,” said my latest distillery guide in the café, with its cinematic widescreen windows. “Whales too.”

The second distillery experience was another thrilling one and I don’t just mean the whisky. In a nod to the pandemic, the guide from tiny Kilchoman farm distillery met me down at the wild and wildly beautiful ‘tasting room’ of Machir Bay, with its 2km necklace of sand. The guide’s smiles were infectious and soon spread to my new friend, Michael, a banker from London, who had booked the same Covid-era outdoor tasting. He was here to seek escape too. We both knew what from, but this was not a time for talking elephants. We found our solace as whisky tales soothed with a dram in hand and gulls swirling above on the brisk breeze. There was time to wander the sands too. We made time.

My base for the days of whisky, the Port Charlotte Hotel, slotted into place like everything seems to on this trimly-run island. I reached it via a wee side trip to Portnahaven (Hughie offers more than just a taxi service), a sleepy fishing village that fights a daily battle with the Atlantic. Hughie insisted I had to see a sign. It was ‘just’ a large splosh of paint on a wall saying ‘OK’. Hughie suggested it may have been to reassure returning servicepeople from the Second World War that they were now safe. In this Covid-ravaged world it seemed as fitting as the local bus stops, which sported free hand gel.

It felt more than OK at the Port Charlotte Hotel, a whitewashed oasis right on Loch Indaal, with a blinking lighthouse completing the feeling of sitting inside a postcard. One morning the first rays of sun eased me up and I eked outside to find Islay slowly rousing. I thought it was just me savouring the explosion of burning orange and ochre, but then I spotted a seal as friendly as a Labrador and two locals ‘enjoying’ a bracing morning swim.

Dining out on Islay felt equally joyous; I didn’t eat badly once. At Port Charlotte it was hard to choose between a heaving seafood platter and Islay beef fillet; at the Islay Hotel it was tennis ball-sized scallops then local lobster mac ‘n’ cheese, and at SeaSalt in Port Ellen, more lobster alongside seafood specials and Islay beef and lamb. Owner Yan Wang explained: “Islay is like one big larder. It’s almost embarrassing what we have here with our seafood fresh from the boats, bountiful farms and the seasonal game.”

One of the culinary highlights was at my other Islay base – Glenegedale House. Owners Graeme and Emma Clark conjured up a seafood feast that would struggle to be fresher – “The boats come in at 5pm and it’s on your plate by 7pm,” she said.

Emma insisted all guests at her award-winning hideaway get out exploring Islay and she was full of advice. She couldn’t believe that in half a dozen visits to Islay I’d not walked on Big Strand, at 12km the island’s longest beach. I made amends, following the sound of the Atlantic surf in search of the ocean. It was not long until my shoulders dropped and I smiled as white sands spilled out all around when I descended from the dunes. 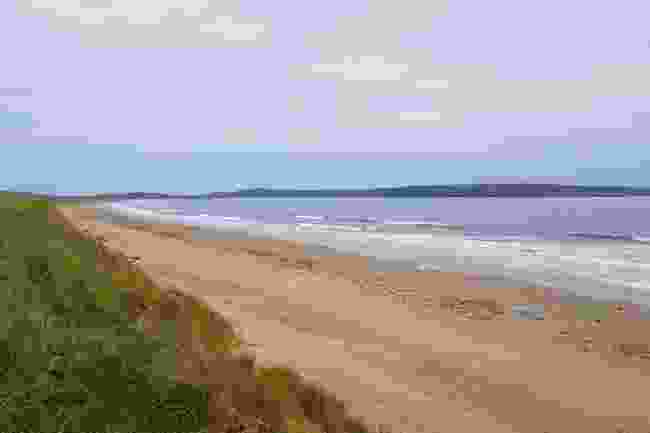 Not content with my venture to Big Strand, Emma asked Islay E-Wheels, a new outfit run by a lovely young couple, to bring me one of their e-bikes. I set off south and soon left the modern world behind. After shaking off the Victorian distilleries east of Port Ellen I was alone. Utterly alone, for the first time since the pandemic restrictions began in February.

It felt weird, then joyous. I was cheered by a deer skipping around the tree line and intrigued by the ‘Dun’ on my OS map. No one had mentioned it, no guidebook includes it. There are thousands of these wee ancient hill fort sites dotted around Scotland. I bashed down to it through gnarly vegetation and emerged on a promontory overlooking the Atlantic. The Mull of Kintyre smiled back to my left, while the island of Ireland hunkered down under low-slung cloud on the other flank. Islay offers the sort of mindfulness that courses struggle to teach.

I was enjoying being away from the world now and spotted a starched white sand cove. Again it was nothing on my map. I slipped down from the dun and was greeted by an otter meandering his way along the rocks. In the bay the seals were busy sunning themselves, though a couple couldn’t resist splashing over to check me out. I caught sight of porpoises too, flirting their way into view then skipping off into the depths before I could get my phone out.

My last stop was, of course, at Ardbeg, where many of the myriad layers of Islay gloriously fermented in my mind, or rather distilled. The sea salt filled the air and added a tang to the slowly maturing whisky on the Atlantic battered coast. It was sunny now; my face warm. For the first time in months I was thinking about nothing bar just breathing and the sun. They took my temperature – ah yes Covid, I’d forgotten about you – but that was OK. It was all more than OK on Islay. Ron was about to tell me what a time it was to be on the planet, in this room, right now, and I thoroughly, spirit soaringly, agreed. 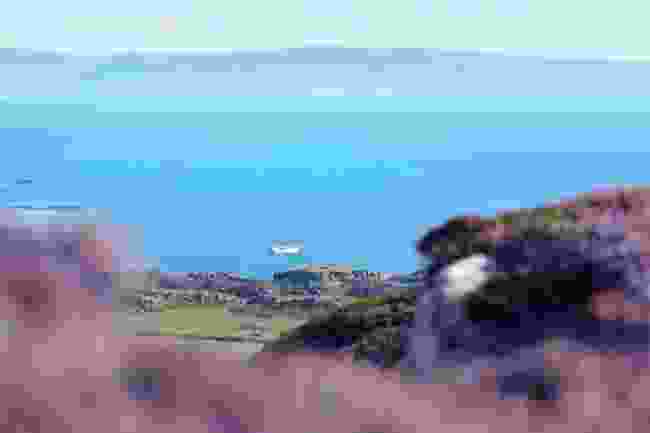 Jul-Aug Nominal summer, which means the mercury can top 20°C, but rain is a frequent visitor.

Sep-Mar The ‘low season’ is peak season for migratory birds. The mitigating effects of the Gulf Stream temper the worst of the frosts and coupled with the maritime climate reduce the chances of snow, though you will still need all your layers. The island feels on the cosy side of hygge.

There are CalMac ferries to Islay from Kennacraig in Kintyre, but they make for a long journey as you have to get to the ferry port from your arrival point in Scotland. A much quicker option – and arguably not much less green given the multiple transport option of road/rail and ferry – is flying from Glasgow with Loganair. The scheduled flight time is 45 minutes, but in reality you are often spirited over in under half an hour. The added bonus are the epic views en route as Scotland unfolds like a tourist office promotion video and Islay looms tantalising into view.

There is a limited local bus service – timetable information available at argyll-bute.gov.uk. Currie Taxis offer bespoke taxi tours, including distillery transport. E-bikes are available from Islay E-Wheels which can deliver to your accommodation. It can also supply Thule rear-mounted child seats. Islay Car Hire offer hire at the airport.

7 Top things to do on Islay