The little-known corner of Thailand you'll never want to leave

Liz Cleere discovers why so many yachties stay so long in Thailand's pretty harbour, Ao Chalong

Just outside Ao Chalong, Phuket's main port of entry, there is an insignificant little island called Ko Mai Ton. Despite its proximity to bar-thumping Phuket, it's a quiet place. While tripper boats speed past, rushing their passengers to as many destinations as possible in a day, canny holiday-makers take a more intimate and leisurely longtail boatride to Ko Mai Ton. There they enjoy a book on the beach, maybe some snorkelling over the coral, perhaps a walk in the rain forest along the island's shady trails.

No-one lives on the island and there are no hotels, apart from an abandoned development on the eastern shore which makes a good base for visitors, and where an enterprising local businessman has set up a lunchtime restaurant.

We dropped the hook as the sun began its descent behind a speckling of clouds. The sweet perfume of tropical vegetation rolled across Esper's decks, a soothing balm after the day's sail. Cicadas began their evening anthem while swiftlets, eagles and hornbills shouted their goodnights.

In the tropics bright changes to dark quickly, and in the confused weather of the transitional period between monsoons you can guarantee some colourful sunsets. Tonight the sky turned from pink to purple as dark shadows slid across the water towards us. Within half an hour everything was black, the horizon lit by one green light from a single squid fishing boat. 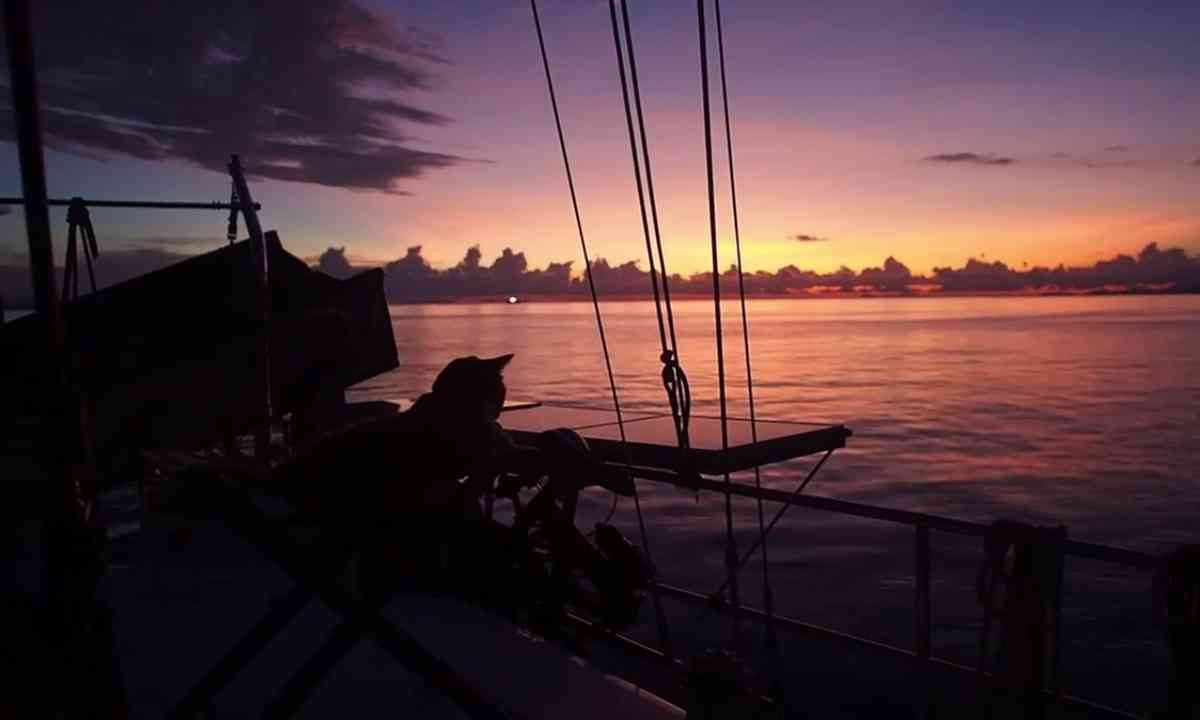 Like most cruisers, we tend to live by the sun, going to bed early and getting up at dawn. Millie, our cat, is usually first on deck, often because she’s been keeping watch throughout the night. This morning the horizon was filled with a spectacular sunrise. I stared, and wondered again if I'd ever tire of watching these moments from the deck

After a breakfast of home-made yoghurt and fresh passionfruit (Liz) and two mugs of fresh ground coffee (Jamie), we took a last look at the view, weighed anchor and motored into calm seas and clear skies. There was no wind, but we didn't mind because it was only a short hop to Ao Chalong.

'Ao' means bay, and this one is huge, providing good year-round protection for yachts in all weather.

"The yottie graveyard," said one grizzled drinker over his beer in the Phuket Cruising Yacht Club, an unfussy bar and club where everyone arriving on a boat winds up at some point.

"Yeah, they sail half way round the world, arrive here and never leave," said another. "Look at all those boats just sitting there, rotting. Haha!"

And it was true. The bay was packed with all kinds of boats, some commercial, some privately owned and most hanging off buoys of unspecific origin. A friend of ours had been hit by a local barge when its dodgy mooring line broke during a storm, so we played it safe by staying clear of the pack and using our own trusty anchor.

Checking in was easy, the whole efficient process taking 15 minutes. No-one seemed to mind that it had taken us over two weeks to get from Malaysia to Thailand, a journey that should only take a couple of days. All the doom-laden warnings handed out by the barfly sailing fraternity in Langkawi disintegrated in the friendly offices. We were given a warm, Thai welcome.

With a number of maintenance jobs to do, we planned to be in Ao Chalong for no more than a couple of weeks before meeting a friend on his boat at the other side of Phang Nga bay. We had no intention of staying any longer, we didn't want to become part of the rotting boat brigade.

In between shopping, fixing and repairing, we had time to get to know the place during this first visit. Chalong is a small and friendly harbour, home to local businesses, traders, Thai families and expats. There is modest tourist accommodation for backpackers and holidaymakers who stray from the smarter beaches and resorts on Phuket island.

It is a centre for divers, with dive shops lining the roads, and boats leaving every morning loaded with holidaymakers eager to get among the area's coral reefs. There are the usual bars and massage palaces, but on a less desparate and smaller scale than its blousier cousin up the coast in Ao Patong.

Ao Chalong is a slow-paced picturesque place. It's easy to see why people never leave, especially when you can spend day after day in paradise sitting in a bar on the dock of the bay watching the ships roll in...