Tales from the Riverbank: Canal boating

Like many this year, Lyn Hughes hit the UK’s waterways in a narrowboat for a taste of travel at a different pace – how did the novice navigator get on?

It was a daunting sight. An armada of narrowboats faced me, waiting their turn to go into the lock I was exiting, some of the skippers clearly as novice as me and desperately trying to get out of my way. So having successfully avoided them, I enjoyed a brief few moments of smugness as I navigated a right hand bend only to ﬁnd a boat heading straight towards me on the wrong side of the canal.

I put my boat into reverse to slow and stop her, but the woman steering the other narrowboat frantically waved at me to pass her on the wrong side. Cursing under my  breath I did so, only to then over-steer back to the right hand side and get the long suﬀering Amelia spread-eagled across the canal.

The next few minutes were a blur as I straightened the boat and headed for the next lock where my partner, Simon, was waiting, having walked from the previous one. Adrenalin was still coursing through my body as I jumped oﬀ; and our dog was clearly similarly aﬀected as she bolted from the boat. After catching her, and taking some deep breaths, order was restored and I oﬀered to go back onto lock duty which now seemed the easier option after all.

“You’ll come back exhausted but with sparkling eyes,” a man boarding a boat at Napton Marina had said to me the previous day when we’d ﬁrst picked Amelia up. “I wish it was our ﬁrst time again. I envy you because it’s going to be such a special experience. You’ll want to do it again.”

He explained that he and his wife now narrowboat several times a year, having become addicted to it. Talking to various folk who had helped me at the locks the same had happened to them. Some had eventually bought their own narrowboats, others were still renting. 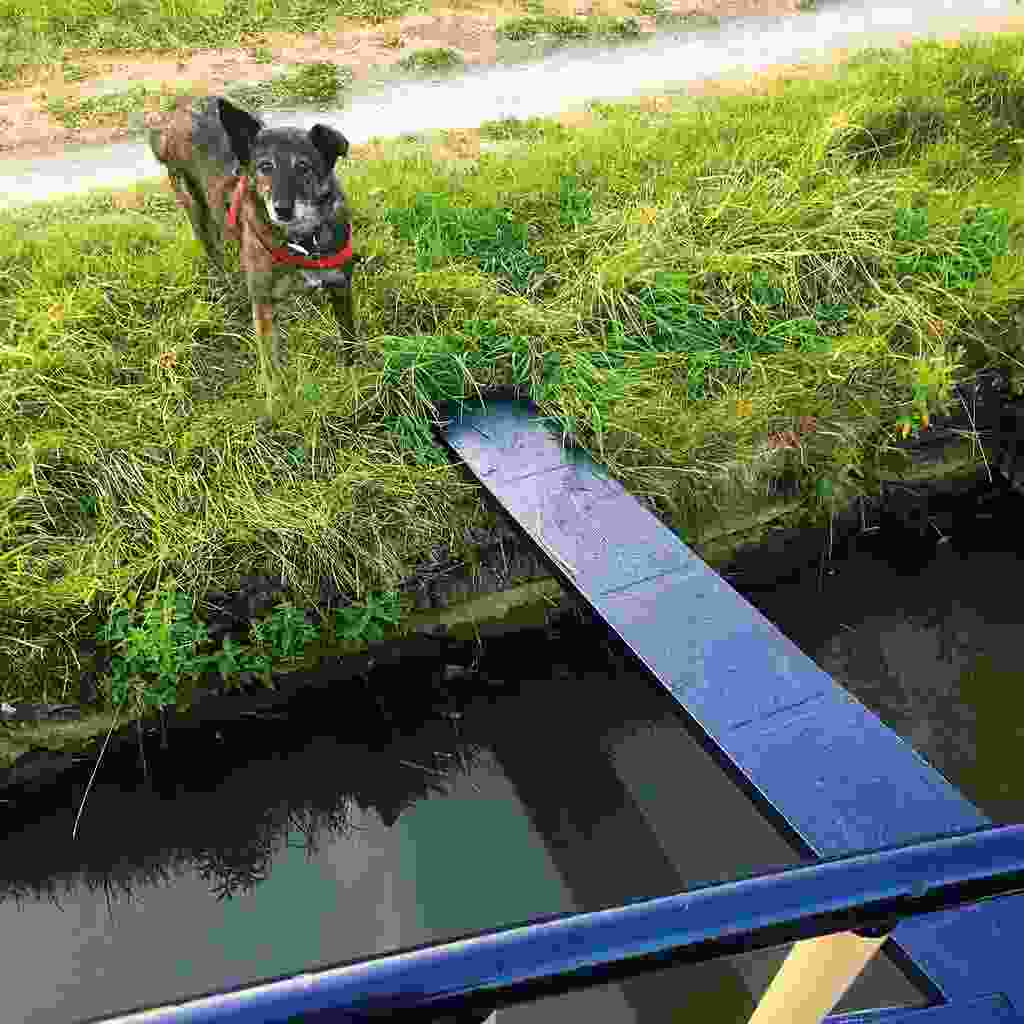 Can we persuade Zoe back on board? (Simon Chubb) 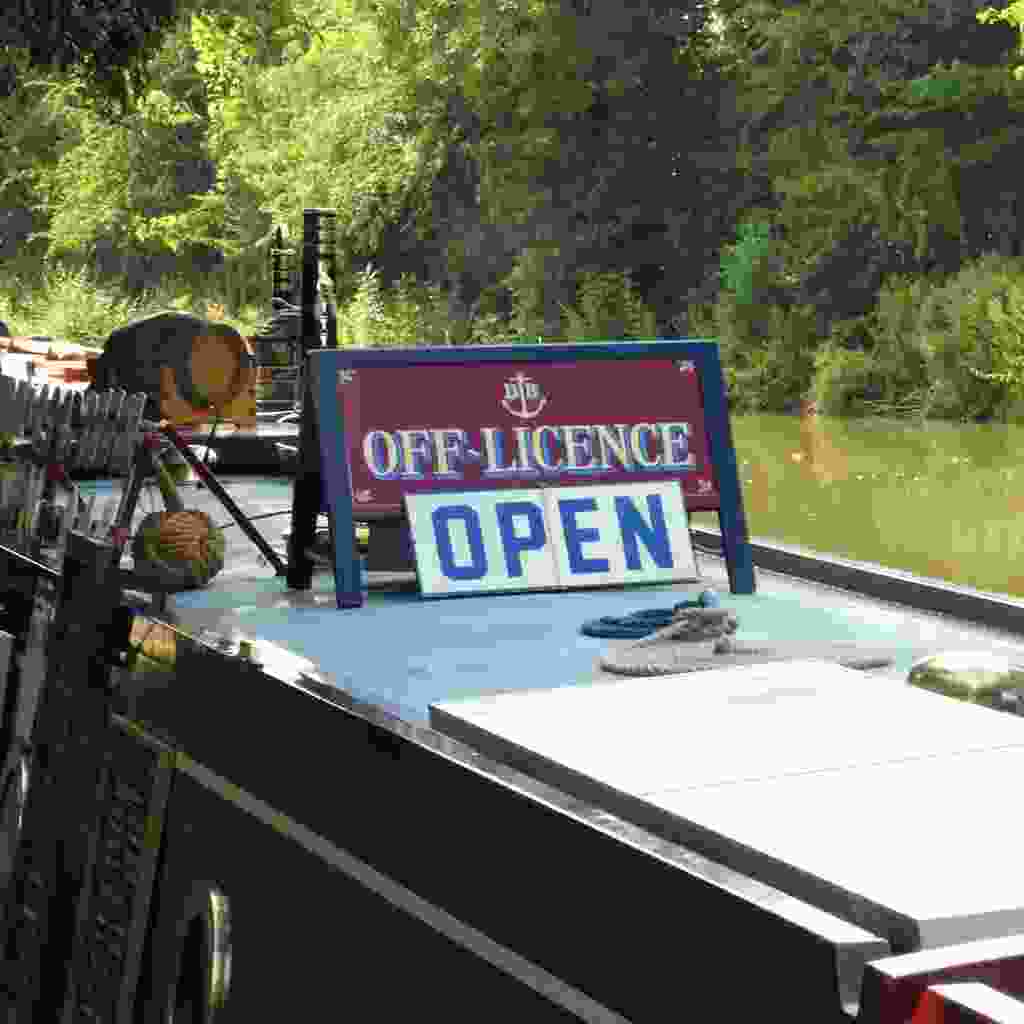 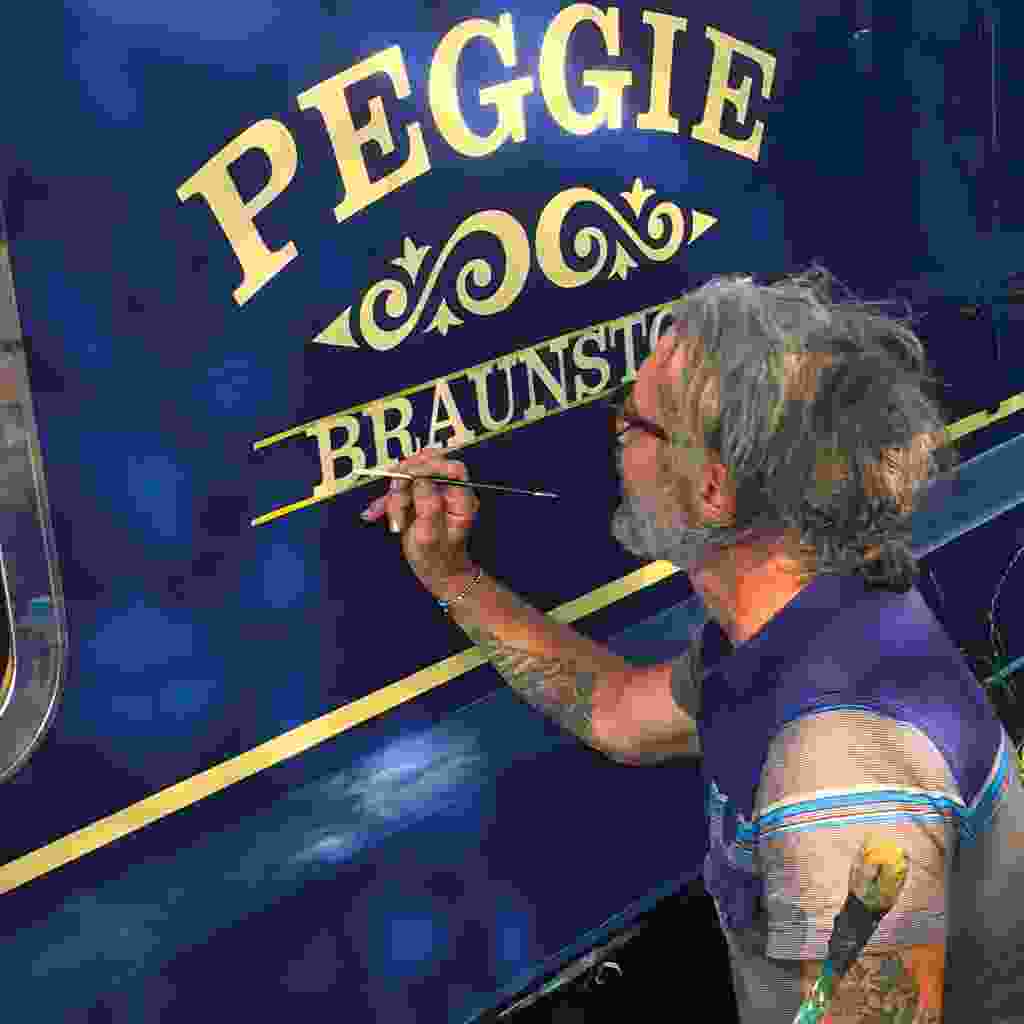 Touching up the paintwork (Lyn Hughes)

It was good to meet such enthusiasts, but I was slightly alarmed at the thought that it might be exhausting. Having arranged the long weekend at very short notice, and struggled to ﬁnd a narrowboat because the whole of the UK seemingly wanted to hit the canals that sunny August weekend, I’d envisaged it as a gentle and relaxing pastime.

I already knew that narrowboats chug along quietly and slowly, leave little wake, and don’t disturb the wildlife or erode the river banks. They also seem to oﬀer the watery lifestyle equivalent of a campervan. Down on the Thames I’d seen ones with bikes, kayaks or paddleboards strapped on, while others have roofs covered in pots of luxuriant herbs, colourful ﬂowers or even vivid red tomatoes.

Arriving at the marina in Warwickshire, we were directed to Amelia, an Elite 2 model, and my ﬁrst surprise was at the king size bed and the bath that its modest exterior hid. It was all very well thought out and equipped, and instantly felt like home. After a thorough brieﬁng we were free to head oﬀ. There was a choice of routes we could take along the South Oxford Canal, Grand Union Canal or North Oxford Canal, but as newbies with only three nights to spare we had been advised to take a nice easy route to Rugby and back.

We set oﬀ tentatively and within a few minutes found ourselves buried in a willow tree having avoided another boat. In the same way that when I drive a hire car out of an overseas airport,

I sometimes wonder why I’ve been entrusted with this strange machine on a strange road, on the canal I began to wonder at the sanity of boat operators who let complete beginners out on the waterways.

I’d like to say “as the miles went by” but in fact it was initially more a case of the yards going by as we tootled along, getting used to the steering and that we had to move the tiller left to go right and vice versa. But we started to relax a little and made cooing noises at the sight of baby moorhens, ducklings and cygnets.

On our left was the towpath, usually bordered by high hedges, and along which some boats were already moored. To our right were bucolic scenes of gently rolling farmland, dotted with grazing cows and sheep. The bank was thick with overhanging willows, bulrushes, rosebay willowherb and purple loosestrife. Dragonﬂies buzzed past, and clouds of butterﬂies danced over the wildﬂowers.

After a couple of hours, we were approaching Braunston, where it had been suggested we stop for the night. Boat after boat was already moored, and glasses of wine were already being quaﬀed by relaxing narrowboaters, either sitting onboard or on the towpath.

The canal splits at Braunston, with the Grand Union going right, and the North Oxford canal, which we were taking, heading left. We passed under one of its distinctive white cast iron bridges and resumed the search for somewhere to pull in.

Again, boats were already moored for the night, but after a mile or so we ﬁnally found a spot large enough for us to manoeuvre into. This was our next challenge as we tried mooring for the ﬁrst time. “Jump!” Simon yelled as the bow bruised the bank. “No, we’re still moving,” I screeched back. A couple on another boat laughed good-naturedly at our eﬀorts and shrieks and did get up to oﬀer to help but we somehow achieved it. 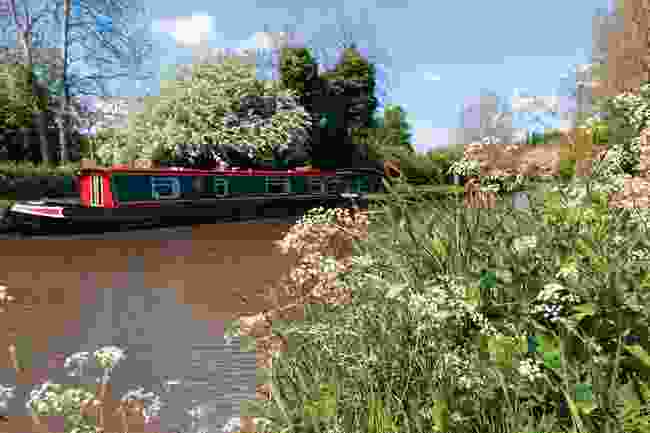 Braunston banks: White cow parsley and other spring wild flowers bloom on the side of the Grand Union canal (Shutterstock)

The next morning, we set oﬀ early to face our next challenge, which was to turn the boat at a designated turning point but, with no other traffic on the canal, it proved to be stress-free once we’d worked out the technique. Heading back along the canal we reached the Hillmorton locks again mid- morning, and this time I jumped out with a bit more conﬁdence.

All went well and a volunteer lock-keeper came over and oﬀered to ‘ﬁnish oﬀ’ for me while I walked on to the second lock. I was chuﬀed afterwards to ﬁnd that he had been complimentary about my prowess to Simon when he was told how new we were to it.

Not that I fooled everyone that I knew what I was doing. A 12-year old girl insisted on helping me at lock two, and a woman from another boat also gave useful advice at that lock and the next. However, by the time we were through all three I felt on a high with the accomplishment, as well as enjoying the camaraderie and banter among the narrowboaters.

We reached Braunston by early afternoon and found a beautiful spot to moor just on the edge of the village, with buzzards circling overhead, and a ﬂotilla of swans and ducks besieging us. Braunston is the unofficial UK capital of the canal boat world, and we explored along the towpath of the Grand Union canal, past characterful old buildings and a busy marina.

Narrowboat after narrowboat was moored along the path, and there was a mellow community feel as groups of boaters sat  around together in the shade. A sign-writer was painting one boat, another boat was selling beer and cider, while yet another was a popular cafe called Gongoozlers.

We smiled at some novices negotiating one of Braunston’s locks before carrying on to the Admiral Nelson pub, which overlooks the canal at lock number three. We passed a pair of backpack-wearing walkers who were presumably hiking The Jurassic Way, an ancient sheep droving route. The scene was a timeless one and, crossing the old granite bridge to the pub, the feeling of history was almost tangible.

We woke at dawn the next morning to a barrage of birdsong and tendrils of mist over the water. It was going to be another hot and sunny day. We set oﬀ early, me rustling up scrambled egg in the galley while Simon steered along the peaceful canal, no other craft on the move yet and no-one on the towpath.

We arrived back at Napton Marina with regret. Were we exhausted?  No, the locks had been tiring because of the adrenalin of navigating them as newbies, but we had since completely relaxed into the gentle rhythms of the canal. It felt as if we had been away far longer than we had. Were our eyes shining? Yes, I really think they were. Would we do it again? Well, we might have to persuade the dog. But, yes we would, you bet! 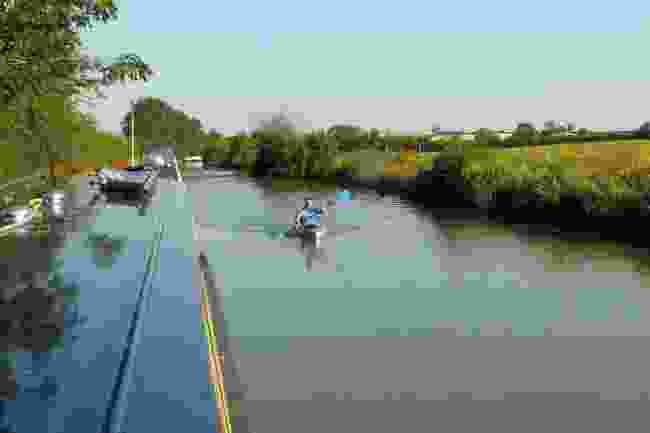 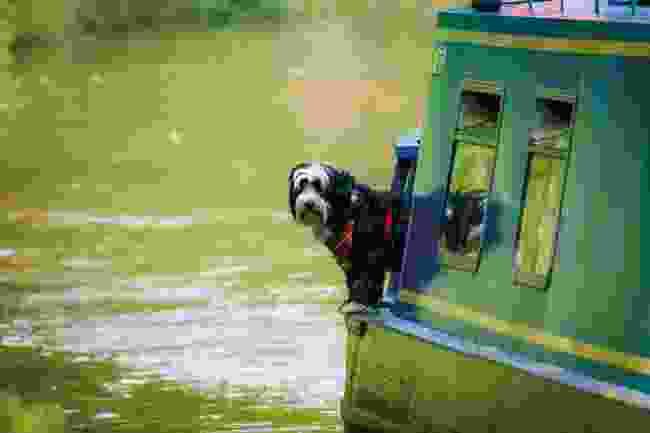 The author travelled with Drifters Waterway Holidays (0344 984 0322), made up of nine hireboat companies offering 590 canal boats from 47 bases across England, Scotland and Wales. Lyn took a three night break from Napton, Warwickshire. A similar short break (3-night weekend or 4-night mid week) on an Elite2 boat is also available. Tuition is included as part of Drifters’ holiday packages. Narrowboats range from 32ft (10m) to 70ft (21m) and can accommodate from two up to 12 people.

The narrowboats are very well equipped, but some hire companies require you to take your own towels. Wear non-slip shoes. You’ll be exposed to the elements so don’t forget sun protection, hat and wet weather gear. With limited space, don’t overpack and a squashable bag, rather than a suitcase, will be easier to store. Gloves are a good idea at the locks to protect your hands.

Although you should take food and drink, part of the joy is stopping at pubs en route. There will also be shops within walking distance of the canals. Take folding chairs so you can sit out on the bank in good weather. You’ll see lots of wildlife so consider taking binoculars and bird/flora books.

You’ll need a good waterways guide such the Collins Nicholson Waterways Guides. We used the one to Grand Union, Oxford & the South East. The Canal River Trust’s website is a mine of knowledge. Download the Boaters Handbook and watch the accompanying video to learn the basics including how to work locks.