Taiwan's capital is a sprawling but intriguing mass of temples and treasures. New transport links and direct flights from the UK make it easier than ever to explore

December 2017 saw the launch of China Airlines’ new direct flight to Taipei from London Gatwick. It’s a chance to discover a frenetic, 24-hour food worshipping city; one dominated by rampant consumerism yet infused by authentic Chinese beliefs. But it’s not as impenetrable as it first seems.

Taiwan is a safe and tolerant society – it became the first Asian country to legalise gay marriage in 2017 – and this liberal spirit is reflected in Taipei, its relatively crime-free capital: the greatest hazards you’re likely to face here are those posed by onrushing traffic. Just take care to avoid any potential offence and refer to Taiwan by its self-declared title, the Republic of China, and not the People’s Republic of China, which it broke away from in the late 1940s.

Despite its sprawl, the capital has good public transport. What’s more, by buying tickets online for popular sites like the observation deck in the Taipei 101 tower, you can circumvent long entrance queues, meaning you can see a lot in just one day.

Taiwan Taoyuan International Airport is located 40km west of Taipei in the Dayuan district. The new direct service flies four times a week and takes around 13 hours, with a good-priced ticket.

British citizens do not require a visa for stays of up to 90 days. At the airport, the arrivals process involves passing through human quarantine, then passport control, luggage collection, animal and plant quarantine, and finally luggage inspection. Once through, you will find ATMs, info booths and currency exchanges. 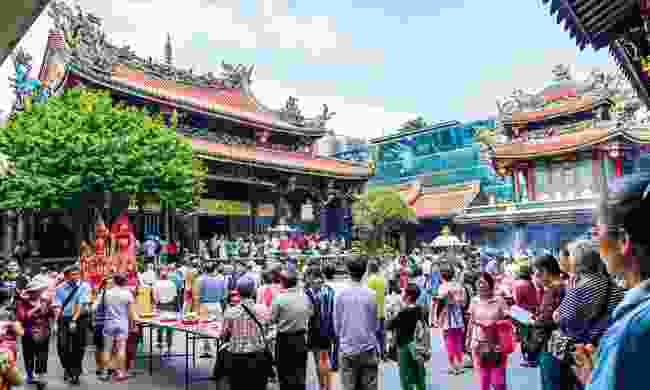 A great addition to Taipei’s public transport system has been the extension of the MRT (Mass Rapid Transport) network in March 2017, which now connects the city’s main railway station to the international airport. The express train takes about 37 minutes.

Taxis from the airport downtown are metered and take roughly one hour depending on traffic. The airport bus services drive through key routes including the #1819 to Taipei Main Rail Station, #1840 to Songshan Airport and #1960 to Taipei City Hall.

Defrosting diplomatic relations with China have spawned a ferry service that connects Taiwan with Mainland China. The Cosco Star sails overnight (nine hours) from Xiamen, China, to Keelung, near Taipei, every Thursday. The website is in Chinese but it is easy to buy tickets from the many local travel agencies found in Xiamen. 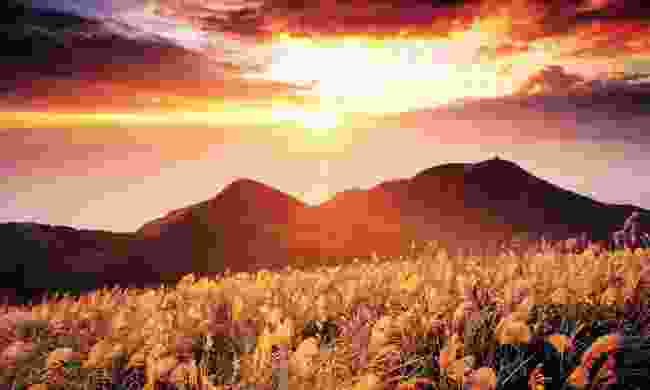 Taipei is spread out, so invest in a MRT day-pass before heading to its landmark Longshan Temple. At 8am this Taoist-Buddhist site is full of pre-work worshippers; grab a breakfast of dumpling soup at its nearby foodstalls.

A short MRT trip takes you to the Chiang- Kai-shek Memorial Hall, a bombastic colossus revering the father of modern Taiwan. See its changing of the guard and check out the slick Cadillac collection amid his memorabilia.

Jump on the Tamsui-Xinyi MRT line next to reach Tamsui’s 17th-century Fort San Domingo on the coast. The Dutch-built fort is adjacent to the former British Consular Residence, with its old Victorian interior. Grab food at the metro stalls, then zip back on the MRT to Shilin. From here, the R30 bus links the National Palace Museum, a site dazzling with Chinese antiquities acquired when Taiwan ceded from China in 1949.

Head on the MRT to the Taipei 101 stop and head up to its 89th-floor observatory for fine views. After, grab a pre-dinner tipple in the trendy bars of Xinyi, then finish in one of the many night markets. First-timers should try Shilin’s, to sample specialities like oyster omelette and the infamous stinky tofu – not as revolting as its smell.

Top end: For a handy stay in the downtown area of the city (close to Zhongxiao Fuxing MRT), Les Suites Da-A
is a rather well-manicured boutique with a retro-modern interior decor and enough gadgets to delight tech-lovers.

Mid range: If you’ve seen the movie The Grand Budapest Hotel, then the colossal and slightly old-fashioned Grand Hotel may ignite a few flashbacks. This large, 14-storey pseudo-palace was built way back in 1952 and it resembles the set of a Chinese opera in places, often feeling endearingly shambolic. 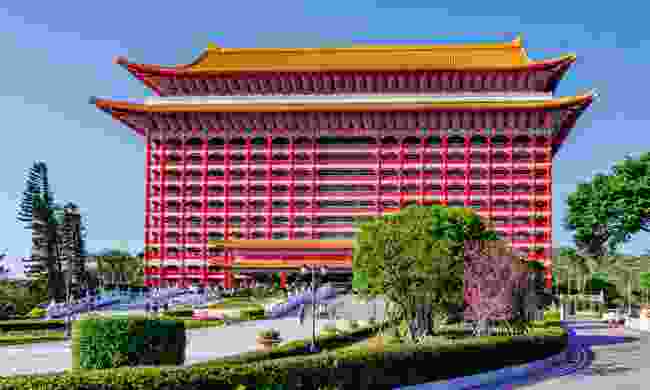 It’s worth staying several days to explore Taipei’s myriad museums and malls, and to continue your market food education. The city is also circled by mountainous countryside easily accessible on day trips.

Yangmingshan National Park lies close to northern Taipei and its volcanic scenery offers fine hikes and a true wilderness. But note that the well-maintained trails, such as those leading to its highest point at Mount Qixing (1,120m), can often be crowded at weekends.

Alternatively, luxuriate in the city’s suburbs at Beitou Hot Springs. With much of the geothermally heated water being piped into smart hotel resorts, for atmosphere’s sake, join the locals at the open-air public baths. Nearby is some well-preserved Japanese architecture around the Beitou Hot Spring Museum.

Foodies (or those arriving by ferry) may want to venture to the sea-facing city of Keelung, with its Miaokou Night Market known for delicacies like butter crab.

Visas: Not required by UK citizens for stays of up to 90 days.

Highest Viewpoint: Taipei 101 (508m) has views across the city from atop the world’s former tallest tower.

Health issues: Take insect repellent for the coastal lowlands, as dengue fever has been reported; and be aware that, between May and November, the weather can be erratic and the island may even experience cyclones.

Climate: Taiwan has a warm, temperate, often wet climate all year round and average temperatures of around 22ºC. This represents a considerable variation from the 15ºC of December-to-February and the highs of 30ºC-plus between July and September.