Want to meet the huge fish that mysteriously flock to this Atlantic isle? David Higgins pulls on his flippers and dives into the blue

The 12m-long whale shark is an ecosystem in itself, I realised as I snorkelled side-on to get a better view. Large remora suckerfish flank her, sliding up and down her skin, while pilot fish appear to lead her through the ocean.

Then something grabs my fin. I kick back to shake it off but it grabs me again. I look around. August is trying to tell me that another whale shark is moving in to my right. It comes out of the planktonic gloom, alarmingly large and widemouthed. At least 12m long and, on profile, not that much different from a great white.

It swims towards me, near trapping me between the two of them. I wonder if this is the moment I become the filing in a whale shark sandwich. I stop and turn quickly, swim along their vast bodies till I’m behind them and in open sea again. 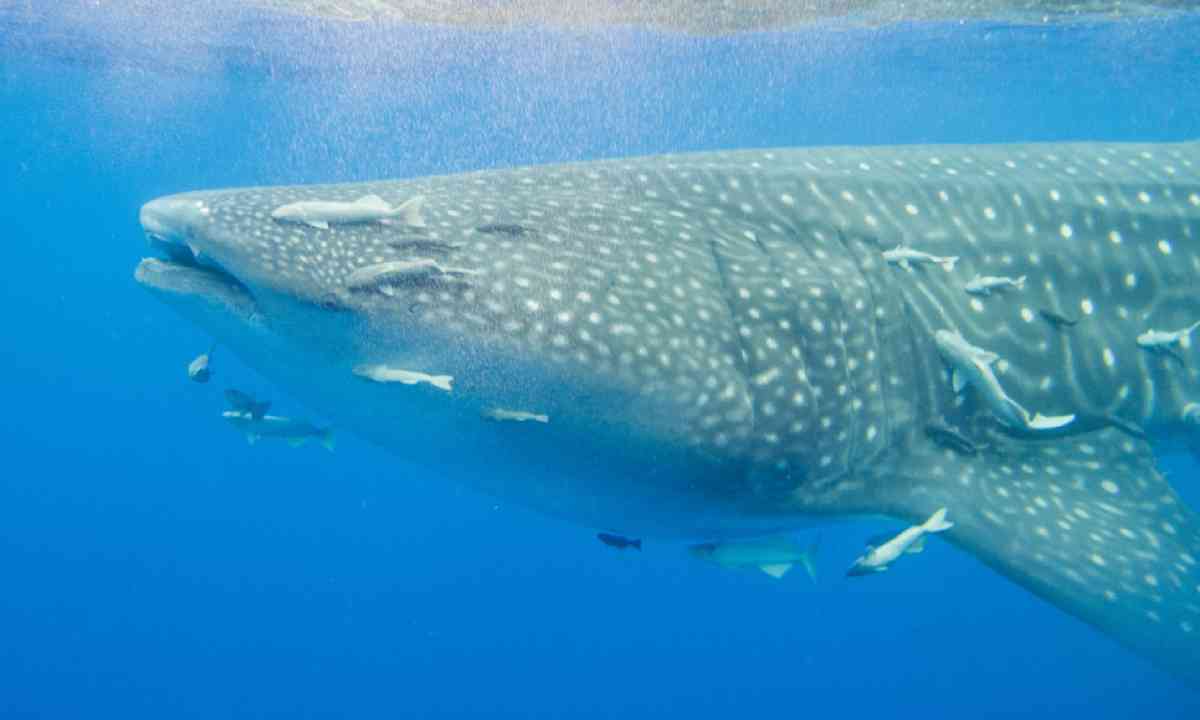 I watch as they carry on with their lives, oblivious, knowing full well that I was safe all along, despite the size of them. The vestigial teeth of whale sharks are so small you can only see their gums, and their gullet is only about the size of a fist. They couldn’t swallow me even if they tried. Not that they would: whale sharks are placid filter feeders, their diet composed only of the ocean’s smaller creatures.

This is St Helena, and we’re 5km off shore from Bank’s Battery in 100m deep water. The sea is warm with a moderate but growing swell. Pregnant whale sharks turn up here every summer, large females with the tell-tale bulge along their abdomens. These large, pregnant females are a rarity in the world of whale shark research and no one seems to know why. There are 14 of them in the sea with us right now, turning arcs across the surface as they feed.

Keith Yon, our skipper, finds them every summer off Bank’s Battery, Egg Island and in smaller numbers everywhere along the coast of St Helena. He takes regular tour groups out to swim with them, always following the code of conduct that requires snorkellers to remain 3m from the animal and 4m from the tail – to protect both the sharks and the snorkellers.

The world’s largest living fish, whale sharks feed on some of the smallest zooplankton including fish eggs, micro-algae and plankton sifted out from gallons of water with every gaping mouthful. The food is caught on filter pads, thought to be modified gill-rakers, but looking more like giant coffee filters. 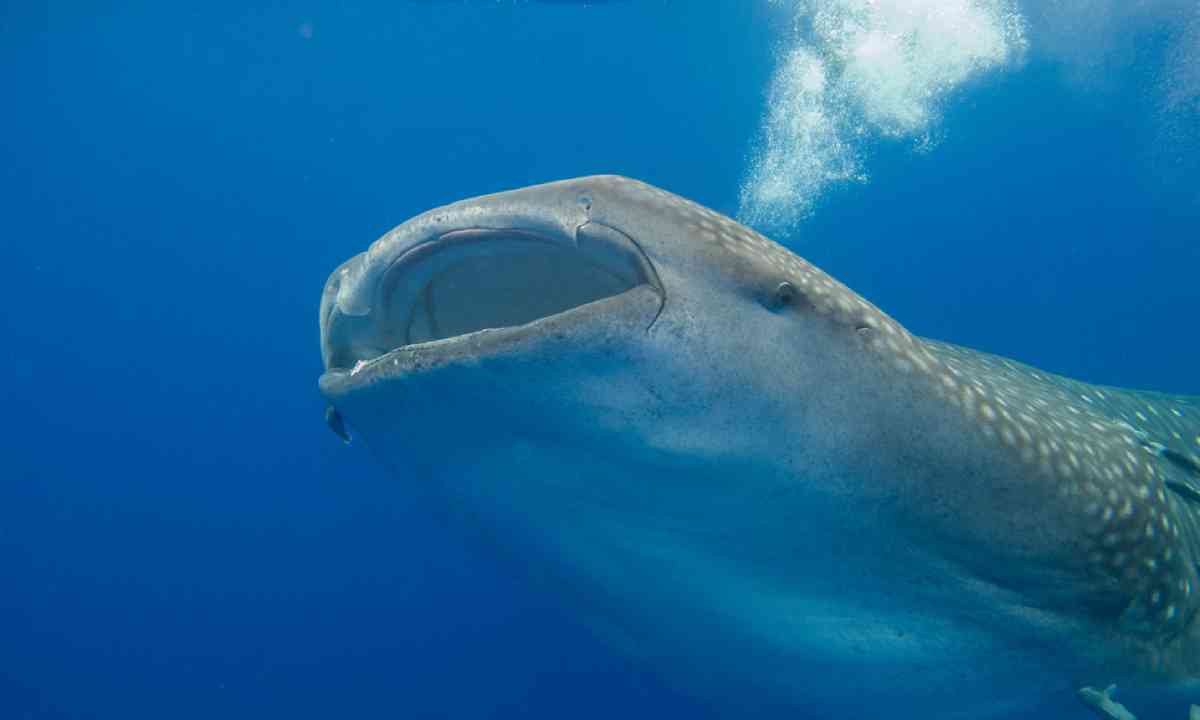 I swim with them till they leave me tired in the deep sea. The swell hides the boat, and when I rise on a wave and spot it, I’m a good 300m away. I know there are other sharks in these waters – hammerhead, thresher and mako – but I try not to think of them as I snorkel slowly back, all alone, 5km out to sea. When I reach the boat we move on to find more of the world’s largest fish.

Over the summer I swim with them time and time again. Sometimes it’s with only a single shark; at other times I swim with large aggregations. I help Morgan and Mike as they measure the fish with a piece of knotted string that’s 12m long.

Morgan and Mike stretch the string between the whale sharks’ gaping mouths and their giant tail fins while I photograph the sides of the fish for identification purposes. We find whale sharks that can’t be measured accurately as they stretch beyond the length of string that Morgan has prepared. Whale sharks are known to grow to 18m in length, but it’s unlikely that we’ve measured the largest – they could grow to over 20m.

No one knows why they come to the summer seas of St Helena. We don’t know what route they take or the numbers that arrive, but last year an aggregation of 35 whale sharks was recorded. Importantly, the sex ratios are close to 1:1, which is unheard of elsewhere, with the exception of the Galápagos Islands. 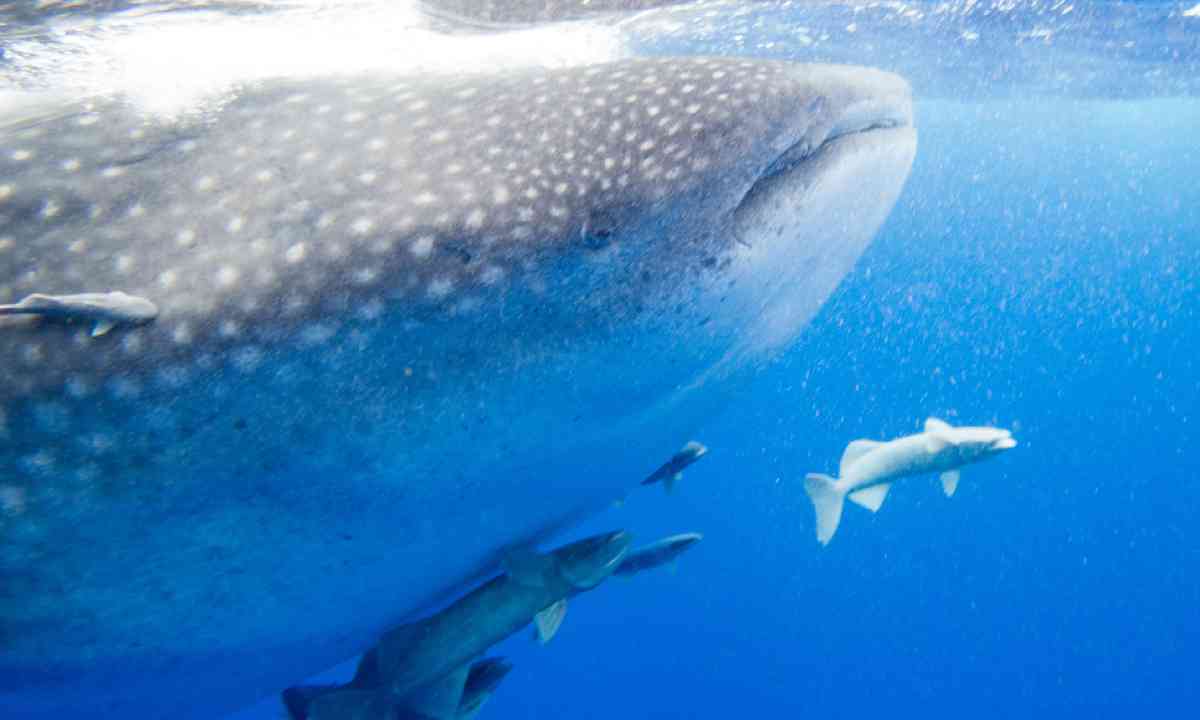 I swam with whale sharks many times over my last summer on St Helena. At such times it’s easy to forget the scientific mystery and become lost in their majesty. Sadly, my time to leave arrives and in late February 2015 I board the RMS St Helena for the last time to take the six-day crossing to Cape Town.

In every issue of Wanderlust, we publish our favourite submission from the Experiences page of the myWanderlust website – like this one, by reader David Higgins. All of the Experiences are written by Wanderlust readers, amateur writers and travel enthusiasts, who share their stories online with the myWanderlust community. Each month, we select one stand-out piece of travel writing and publish it in the magazine's From The Road section, alongside articles by professional writers and editors.

All images by David Higgins