If annual leave is tight, don't despair - you can see South-East Asia in just a fortnight. Here's how to cram Thailand, Laos, Cambodia and Vietnam into a two-week trip that won't break the bank...

Indochina (Thailand, Cambodia, Laos, Vietnam) is a dream to travel through. The region is a safe, vibrant first footstep into Asia. People are friendly, food is delicious and it’s excellent value for money.

For those who missed out on backpacking in their early 20s and now have only limited annual leave, it’s easy to plan an independent overland trip there, much of which can be pre-booked online before travelling. So, put your Thai Baht where your mouth is, and fly into Bangkok now – the region’s most competitive hub for airfares. From there, you can travel overland to Ho Chi Minh (Saigon) through four countries in 14 days, plus travel days. 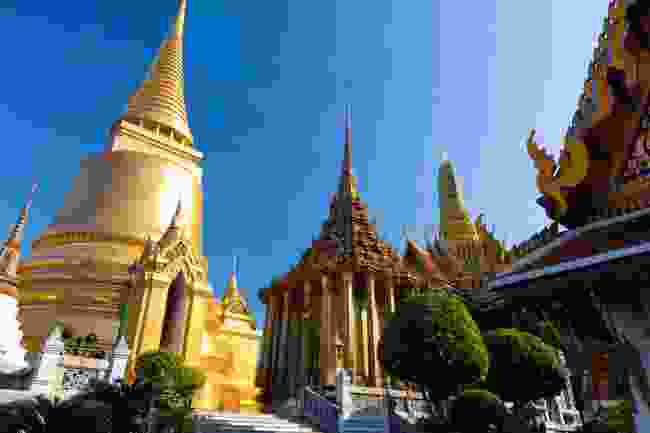 WHAM! That’s the sensation of Bangkok hitting you on arrival. Knockout humidity amid earsplitting, anarchic traffic and sizzling stalls of street food, as Skytrains rumble overhead.

The next day, delve into its humbler underbelly before your evening train departure. A day tour by bicycle might seem suicidal given the daunting traffic but Dutchman Michael Hoes has been safely running his Amazing Bangkok Cyclist tours for 25 years.

Next, travel to Chiang Mai via Thai Railways' second-class sleepers, saving the cost of accommodation. A 13 hour return trip costs around £60.

Or, to make the most of your time, get a return Air Asia flight from Bangkok to Chiang Mai (1 hour) from around £40 (you'll be returning to Bangkok for onward travel to Siem Reap). 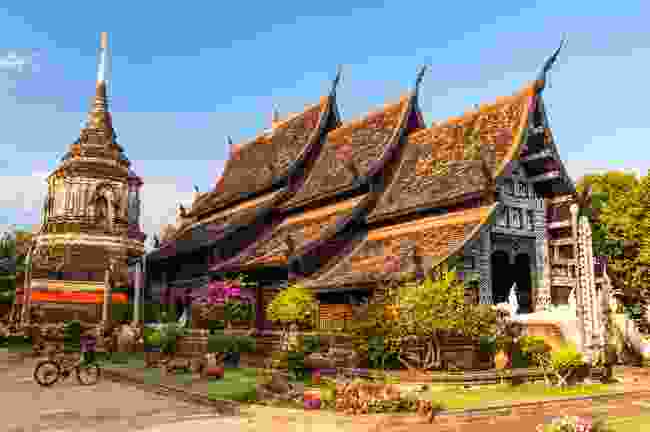 Chiang Mai is chockablock with gloriously decorative temples within 13th-century citadel walls. Spend your time wandering the small city, visiting restaurants and enjoying Thai hospitality. It's a well-trodden base from which to explore the surrounding hills, home to northern Thailand’s many ethnic tribes. To really get among the tribes you need days, so pre-book a shorter excursion to visit the Hmong of Doi Pui village. The Hmong are culturally distinct mountain-dwelling animists who range as far as China and wear distinctive embroidered costumes.

Crossing borders overland is easy to arrange (although ensure any visa requirements are in order first). Once you've returned to Bangkok, take a bus to to Siem Reap - it's 8 hours long and costs around £15. Or, fly with Air Asia from £50. 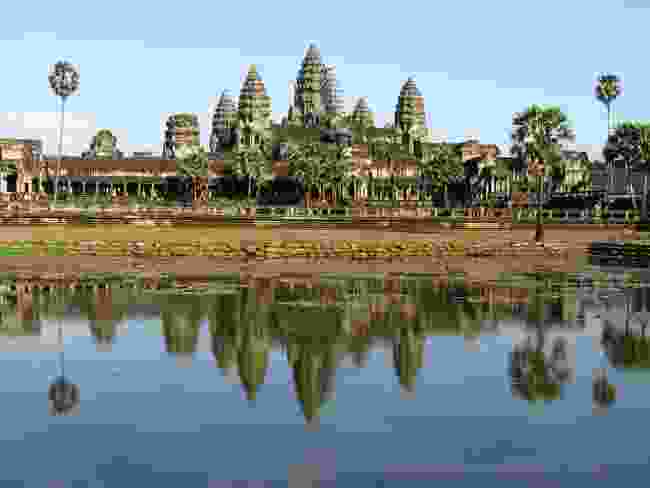 The world-famous Angkor temples are a stone's throw from Siem Reap, so use the city as your base. Angkor receives many visitors, so circumvent the hordes by cycling pre-dawn, and continuing to jump ahead of the crowds for the rest of the day. (We'll explain how!)

Arrive at Angkor Wat before dawn, wandering the stone corridors lavished by Hindu deities and magnificent bas-reliefs glorifying the 12th-century King Suryavarman II. At 7.30am, head to the popular mid-12th-century Ta Phrom temple. It is much photographed because of the great dipterocarpus tree roots that throttle and tilt its stonework, reminiscent of how Frenchman Henri Mouhot found Angkor on rediscovering it in 1860.

Take an early lunch to avoid the lunch crowds - enjoy lunch alfresco at one of the site's open-air restaurants.

When you've finished, head to the late-12th-century Angkor Thom, city of King Suryavarman VII and enjoy its structures, decorated with elephants and totem pole-like facades of human faces, in peace.

By late afternoon, burgeoning crowds will accumulate for sunset viewing from the hilltop Phnom Bakheng temple. Instead, cycle back to the now near-deserted Angkor Wat to watch it smoulder crimson in the lowering sun, bringing an end to your alternative day of Angkorian exploration.

Phnom Penh is around a five hour drive away, and you can take a bus from as little as £10. You may prefer to go by boat – the Tonle Sap Lake Boat takes six hours, and costs £21. 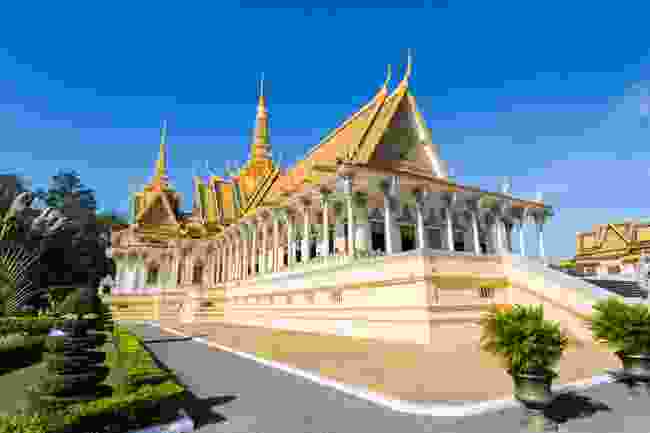 Be under no false illusions; you couldn't visit Cambodia without learning a little about the country's horrifying history, and a visit to Phnom Penh will help you to fully understand the country's harrowing past, and appreciate its road to recovery. Start by visiting the Tuol Sleng Genocide Museum, where the Khmer Rouge interned political prisoners. Twenty thousand souls passed through this former school; the classrooms remain partitioned into bleak cells.

Some 45 minutes away is Choeung-Ek, one of 300 Cambodian killing fields where Pol Pot’s victims were bludgeoned to death and cast into mass graves. If the self-guided audio-tour - narrated by a survivor - is harrowing, the 9,000 skulls of victims stacked inside a stupa will leave you numb.

Don't miss the National Museum of Cambodia, and the Royal Palace.

Cambodia and Laos have no rail networks. A bus from Phnom Penh through rural north-east Cambodia to Pakse, southern Laos, takes 14 hours, and costs around £20. 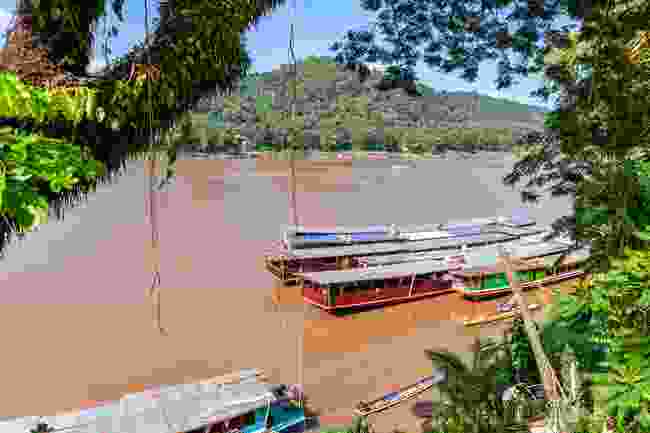 Arrive in Laos to witness a characteristic landscape of rice paddies, buffaloes dozing under trees, and the mighty Mekong braiding through the countryside in sinewy channels, creating midstream islands. Stroll around the island of Don Daeng, passing through small villages where locals relax in hammocks strung beneath stilted wooden homes.

Take a VIP bed bus from Pakse (Laos) to Hue (Vietnam). The journey takes 11 hours, and costs around £20. Arrive early in Hue, central Vietnam. Although the country is essentially an authoritarian communist state, Hue’s comrades are far too busy making money from the tourists that flock to the former imperial capital to worry about Ho Chi Minh’s manifesto.

Cross the Perfume River to explore Hue’s moated royal citadel, glad of a cool overcast day. The last royal Nguyen dynasty made Hue its capital from 1802 to 1945; the citadel was completed around 1833. Within its substantial walls lies an incredible window into Vietnam’s extravagant past: temples with red-lacquered wooden pillars, koi carp pools, topiary hedges, palaces. It’s just a fraction of what remains after the American wartime bombing.

Next, hire a motorcycle and drive through the lush pine forests and rice-paddies of Hue’s southern hinterland. The area is a vast royal necropolis, the most impressive tomb being that of Emperor Khai Dinh. He only reigned from 1916 to 1925 and was unpopular because of his collaboration with colonial France, yet his tomb’s largesse is spellbinding.

Spread over three terraces, his sarcophagus of inlaid ceramics bears his image – full-size, in bronze – protected by a gathering of terracotta soldiers and Mandarin courtesans. It’s almost unthinkable, given Vietnam’s turbulent recent history, that the tomb was completed only 90 short years ago. 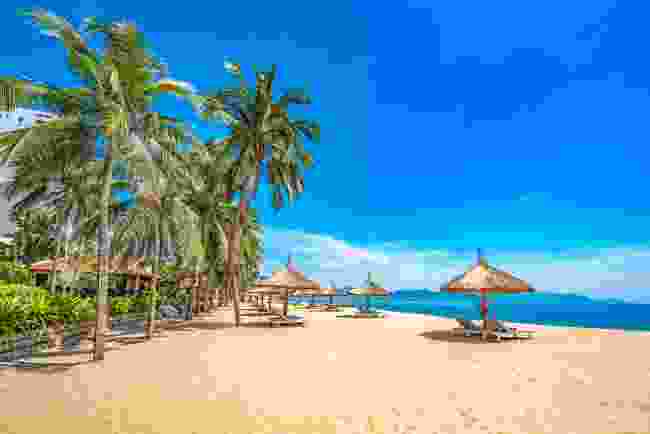 Take a break from all the travel on the lovely mountainous coastline at Nha Trang – Vietnam’s glitziest beach resort with a 6km-long caramel-sand beach. Swim in the South China Sea, eat delicious banh xeo (seafood pancakes) and drink cocktails while watching the sun extinguish. Batteries recharged, it's time to continue south for Ho Chi Minh City the next day. 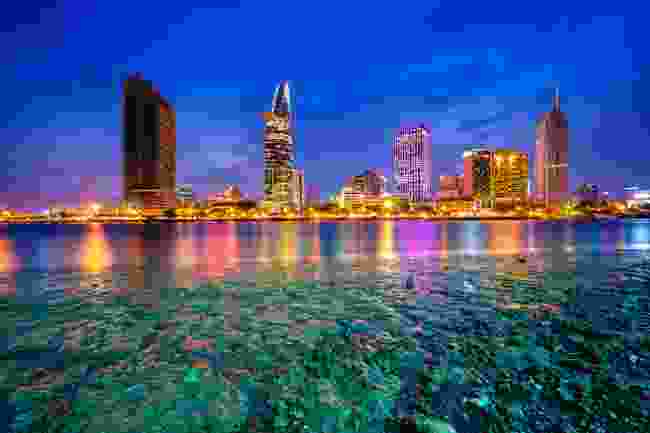 With two days in the city, historic District 1 is a logical place to be based. It has endless restaurants and nightclubs, plenty of cultural attractions (such as the modernist Independence Palace, where the war symbolically ended in 1975) and lashings of French colonial architecture.

You haven't seen Ho Chi Minh City until you've seen it by motorcycle. American Stephen Mueller runs Vietnam Vespa Adventures, and his city tours are undertaken riding pillion on vintage motorcycles. His After Dark tour reaches places visitors would never find, such as a District 4 food market where divine chilli crawfish precede plates of snails and frog. Water snails are a Mekong Delta delicacy (not French) and, although chewy, go well with the fried morning glory; deep-fried frog is chicken-like, justifying its local nickname, KFF.

Finish your whistle-stop tour of South-East Asia sipping cocktails from the top of the Bitexco Tower at EON Heli Bar, if not for the spectacular panoramic views then for happy hour - 1pm until 4pm. Cheers!