South Africa – for the weekend

South Africa for a short break? Convenient flights from the UK make it a possibility. Iconic mountains, great white sharks and the Big Five make it a must

“Any plans for the weekend?” my friend asked nonchalantly. It was an innocent enough question. She just wasn’t expecting my reply. “Oh, you know, just popping to South Africa.”

Time-poor and seeking more from a long weekend than a trip to the Cotswolds or a mooch around Marrakech (as wonderful as both would be), I was thinking big. The plan? To fly from London almost 1,000km due south to Cape Town after work on Thursday, and be back in the office by Tuesday morning. It may sound extreme but with no jet-lag (the time difference is only two hours) and the lure of Africa’s most beautiful city, it promised to be the wildest of weekends.

The wheels hit the tarmac at the very moment at which, on any normal Friday, I’d be sitting down at my desk to start a day’s work. But this wasn’t any normal Friday. Feeling surprisingly chirpy after the 12-hour overnight flight, I was ready to hit the Mother City in all her glory.

Barely two hours after arriving, I was standing at the base of Table Mountain, the city’s iconic peak. A thick layer of cloud poured over its perfectly flat ridge, billowing like steam from a boiling saucepan. “On days like this,” said a man next to me in the cable car queue, “we say the mountain is covered with a table cloth.” 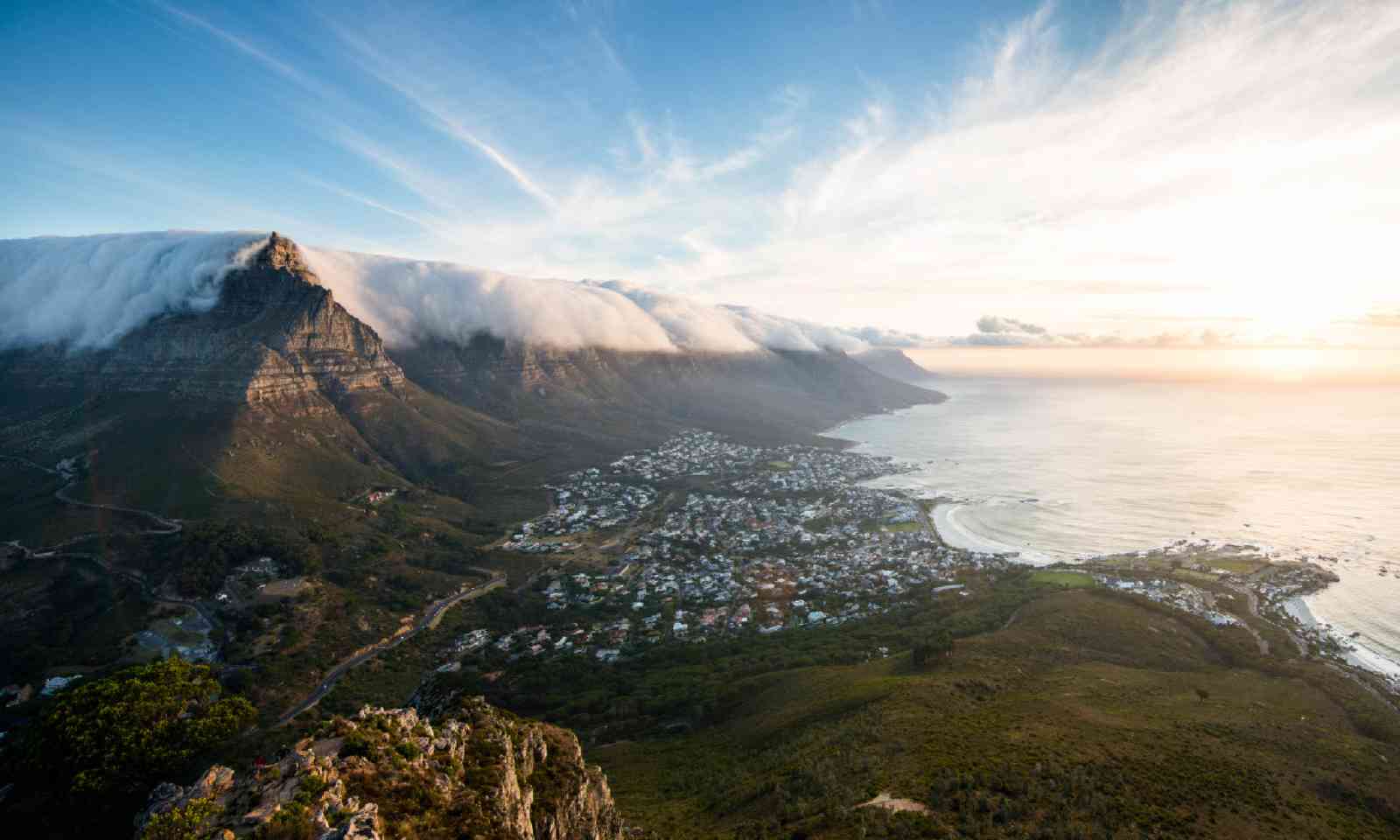 While it’s possible to reach the 1,085m-high summit via a number of hiking trails, I’d chosen the speedier option, given my time constraints. The cable car swung from side to side as it lurched into the steep ascent. People pressed their faces against the glass, spellbound as Cape Town unfolded below. Buildings were sandwiched between peaks and crescent bays; out at sea lay Robben Island, where Nelson Mandela was incarcerated.

Also enjoying the view was cable car operator Christopher. Despite having seen it every five minutes since 8am that morning – and most days for the past three years – he seemed as taken with it as the rest of us. “It’s like looking at the same beautiful painting every day,” he smiled. At the top, a blusterous gale swept in, bringing more clouds that tumbled over the precipice like an avalanche, plunging towards the valley below.

Back down at sea level, I strolled along the gusty beach at Camps Bay. Luxury homes nestled in the foothills of the Twelve Apostles range as mini sandstorms danced across the custard-yellow shore. Sitting on the beach, my gaze gravitated out to sea. Humpback whales were following the coast, slapping their fins on the water and lifting their tails high in the air.

Dawn was only just beginning to creep over the horizon as I set off through the sleepy suburbs, heading north-east. After two hours, I reached our destination: Aquila Game Reserve, in the Karoo Hills, which gives visitors to the Western Cape a taste of the African bush. Home to the Big Five, this private park runs half-day safaris within easy reach of the city.

“We know it’s not Kruger but it’s perfect for those short on time and budget,” said the reserve’s manager Anton Perold. He had a point: safari aficionados may find little to get excited about here, but first-timers or those after a quick fix of animal magic will be satisfied. 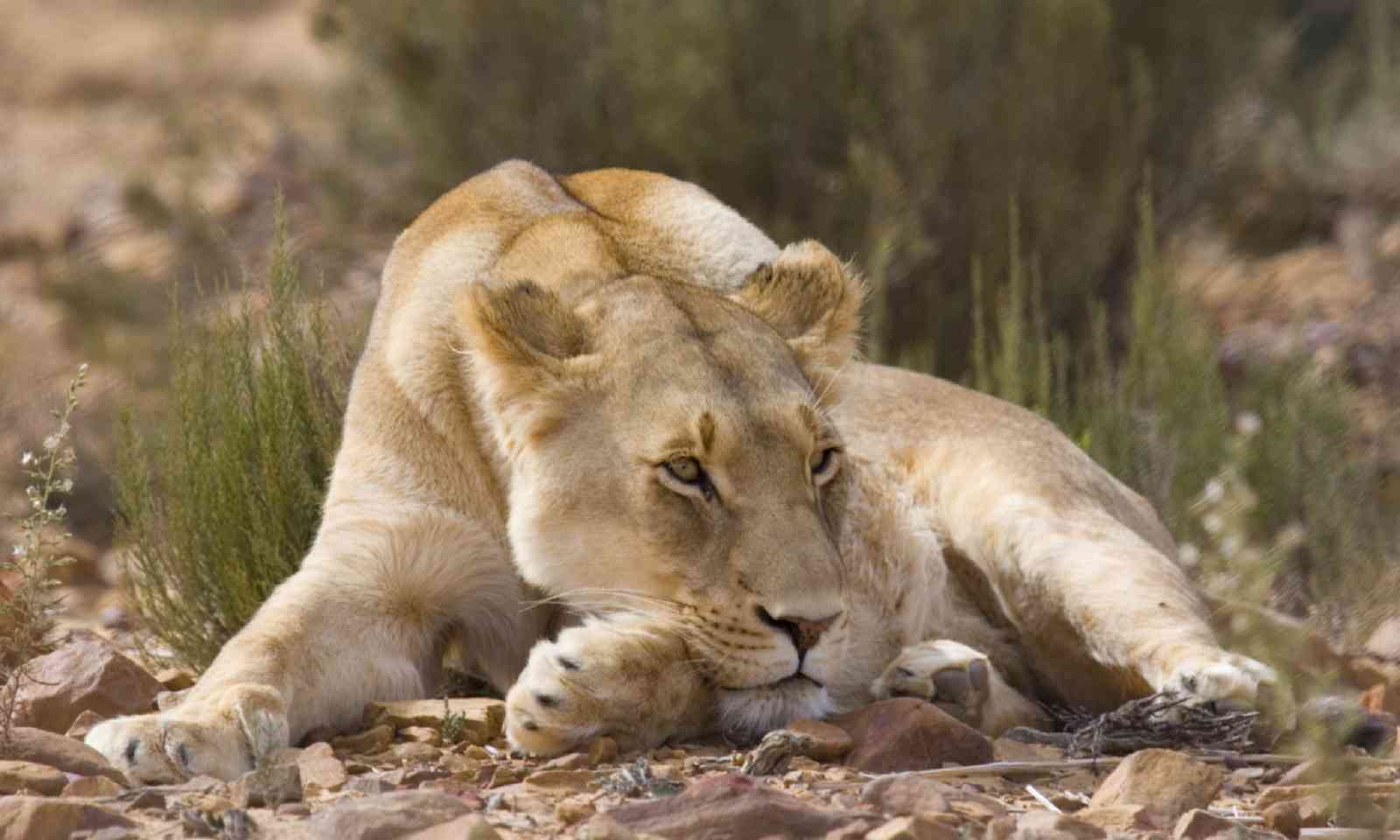 I flitted between the two: thrilled to be bouncing around in an open-sided jeep but somewhat disheartened by Aquila’s ‘stage managed’ approach. But the reserve’s size means you’re almost guaranteed sightings, which is good news even if there’s a little less of the sense of adventure that comes with a real safari.

Setting off, it was approximately 20 seconds before the cameras started snapping. We paused beside a large waterhole where hippos wallowed and zebras sipped. Nearby, a pair of angry-looking buffalos sat beneath a shady eucalyptus tree as sprightly springboks grazed.

This area has always been home to these small antelopes but other big game has been introduced. The most prestigious residents are the five white rhino, protected around the clock by a 12-strong anti-poaching unit. We found two of them, a mother and calf, sitting on the parched ground, an African sacred ibis circling above. “Local legend says that if an ibis flies overhead during your wedding, your marriage will be cursed,” said wildlife guide Abriel.

On the other side of Jurassic Park-style fences, we found the reserve’s pride of lions, sleeping on a rocky hillside. Kept in their own enclosure to protect the zebra and other tasty treats, these lions are really only semi-wild.

But Aquila is far more than a glorified zoo. The reserve – once the preferred hunting ground of the Khoe-San tribe – is home to ancient rock art left behind by these early residents. It’s also taking a stand against one of South Africa’s most controversial pursuits by rescuing big cats bred for game hunting. At the animal hospital, lions, leopards and cheetahs that were once destined to be wallmounted lazed in the sunshine, oblivious to their good fortune.

Back in Cape Town, I spent the afternoon strolling around the leafy Gardens neighbourhood, wandering through the City Bowl district and along lively boulevards lined with striking Victorian buildings with wrought-iron balconies. However, the city’s most colourful area – literally and figuratively – is Bo-Kaap, where houses painted in bold shades of blue, yellow and fuchsia line the cobbled streets.

Meaning ‘Upper Cape’, Bo-Kaap took shape in the 19th century, as freed slaves and immigrants from Asia settled here. Mosques were also built, including one by an Indonesian prince who wrote a copy of the Koran from memory while imprisoned on Robben Island. As I lingered on the corner of Rose Street, the air was filled with the aroma of spices and the day’s final call to prayer.

Day 3: The bay with extra bite

“Are you scared?” asked the agitated Norwegian lady as we lowered ourselves into the cage. “I’m just going to pretend it’s an angry dolphin,” I replied as the waters of False Bay – murky green and cold – rushed around us. The theme from Jaws ran through my mind as I bobbed nervously. Duuuun-dun, duuuun-dun… 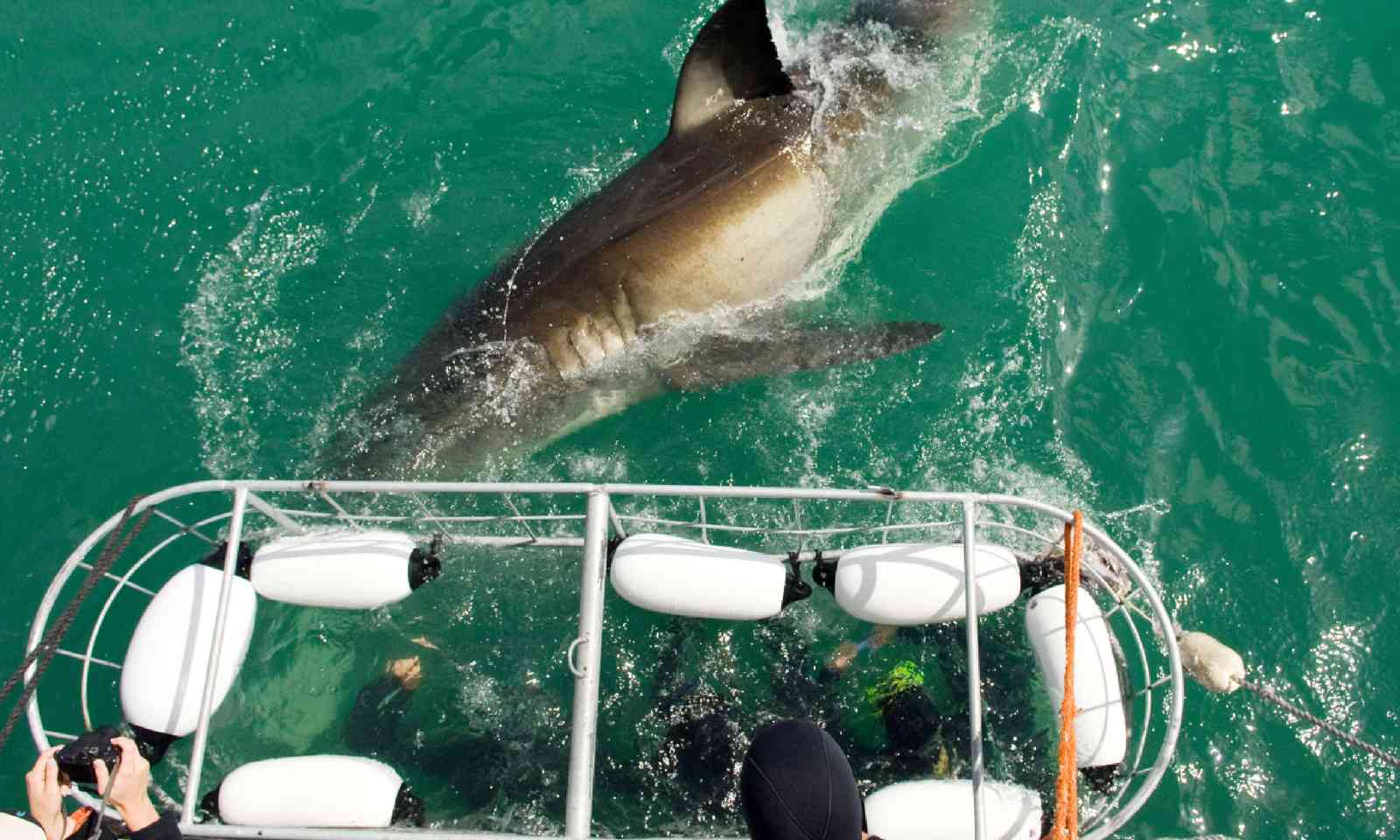 Steadying myself on the metal bars, I was convinced the whole ocean must be able to hear my thumping heart. The minutes rolled by; I remained vigilant. Then, there it was. The stuff of nightmares. Pointy and dark grey, the fin sped towards us as the great white shark moved in for its prize.

“Divers, down!” shouted the bait master from the boat. In the split second before I submerged, I saw the 4m-long shark break the surface, its coal-black eyes staring ahead and mouth wide open, revealing hundreds of sharp teeth. In one swift bite it claimed the head of a yellowfin tuna, which was tied to a rope a few feet away. Then, it was gone.

Cage diving with these impressive creatures is a popular but often controversial activity. Some argue that the use of bait to attract them is altering their behaviour and, potentially, leading to an increase in attacks (which in turn will ultimately only make them more endangered).

Local guide Fiona, who first started working on these boats as a teenager, is undecided. “It’s not inconceivable that our presence has had an impact but the sharks have not become habituated. They’re not waiting around to be fed each morning.” We discussed the issues during the choppy 30-minute cruise from Simon’s Town to Seal Island, a rocky spit of land that’s home to 65,000 smelly Cape fur seals – an all-you-can-eat buffet for great white sharks.

It was clear from the outset that Apex Shark Expeditions – a small operator led by marine enthusiast Chris Fallows – does things differently. Numbers are limited to just 12 people per boat (and three per cage) and, unlike some other companies, it doesn’t use chum (a brew of blood and fishy guts) to attract the sharks. It also operates in an area less frequented by other boats.

Most cage diving excursions are centred around Gansbaai, two hours south-east of Cape Town; but Apex is based near the former British naval base of Simon’s Town, just 45 minutes away. This location has another plus: it’s one of the only places to see great whites breach, a spectacle that occurs between May and July when seal pups are finally weaned off mum’s milk and set off on their own for the first time.

Near numb after half an hour in the water, I emerged from the cage and watched the rest of the action from the boat. Three sharks circled like torpedoes. The crew had given some of them nicknames. There was Mannemarak (Hebrew for ‘crazy’) and Pinky, who races around “like a hooligan”, said Fiona.

In the distance was Muizenberg, a high-rise resort town that has experienced fatal shark attacks. But these creatures are a part of daily life for many, including Fiona. She grew up on this coast and spends every afternoon swimming in the bays. “People think I’m crazy,” she laughed. “I see the sharks in the morning and then jump in the water a few hours later. But I just don’t think about it any more. I’ve learned not to fear them.” 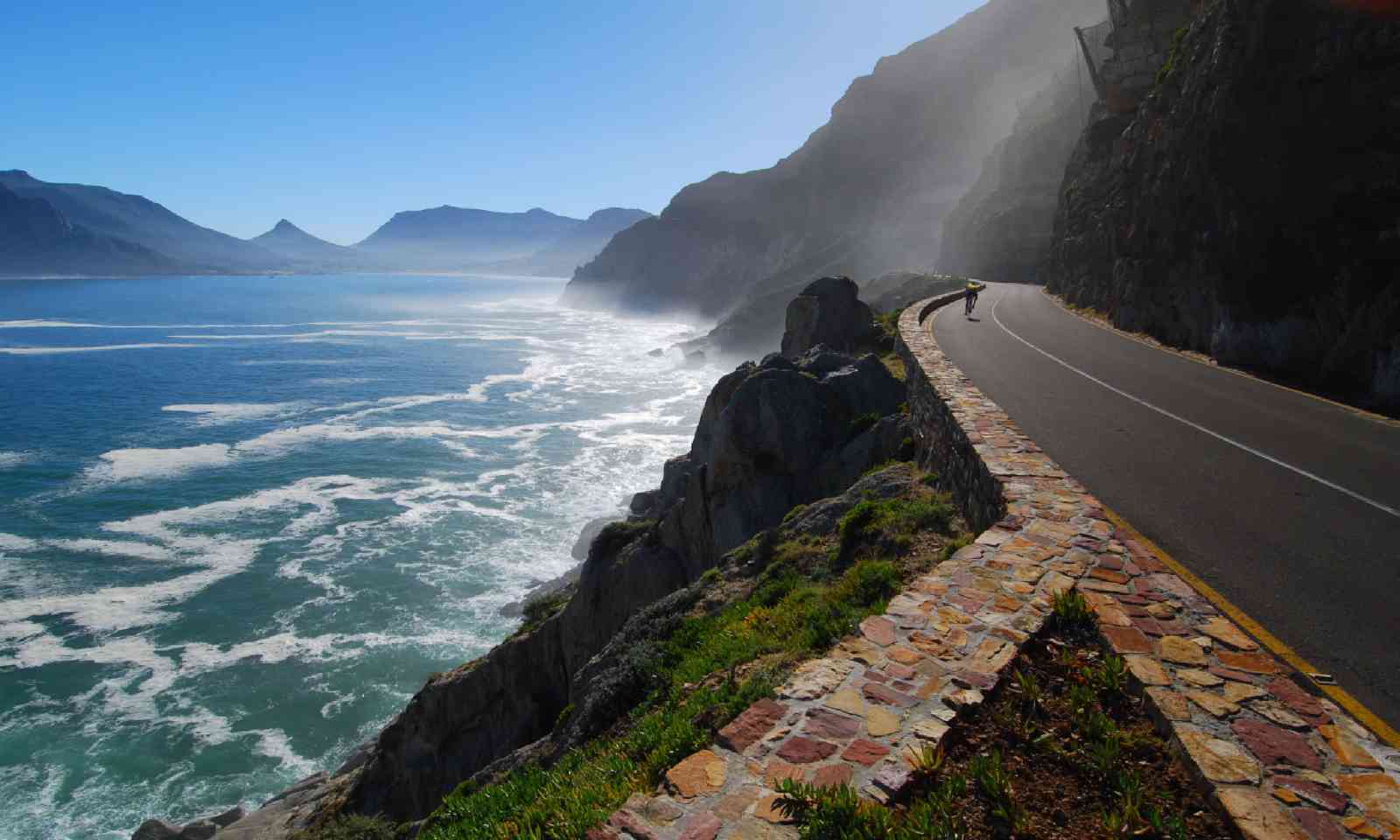 Day 4: The end of Africa

Delores had been working for several hours by the time we stopped by. From her small tin shack high up on a cliff top along the jaw-dropping Chapman’s Peak Drive, she stared intently at the ant-like swimmers and surfers in the bay far below. As a shark spotter, it’s Delores’s job to keep watch for any signs of danger lurking in the cobalt waters. “You see more sharks in the summer than winter,” she said, adjusting her polarised sunglasses to block the glare of the water. “I alert the spotters on the beach if I see one venturing too close to shore.”

Further down the coast road, via the penguins at Boulders Beach, was the rocky peninsula of Cape Point. It was nicknamed ‘Cape of Storms’ in 1488 by Portuguese sailor Bartholomeu Dias on account of the hundreds of boats that have run into difficulty here – two of which can be seen by walking the Shipwreck Trails. These days, the biggest threat around these parts comes from the boisterous baboons that steal food and water from tourists.

A salty breeze whipped around the nearby Cape of Good Hope, the south-western extreme of the Cape Peninsula. A dramatic spot, with craggy cliff s and waves that fizzed on huge boulders, it earned its name from King John II of Portugal who believed it to be a new route from Europe to the Orient.

Standing almost at the very bottom of Africa, Europe felt a million miles away. But home beckoned. There was time for one last stop, en route to the airport. In the Constantia Valley, we paused at Groot Constantia, the country’s oldest wine estate, dating back to 1685. There, among the peaks and vines, we raised a glass of chilled South African sauvignon blanc to a wonderful whirlwind weekend. 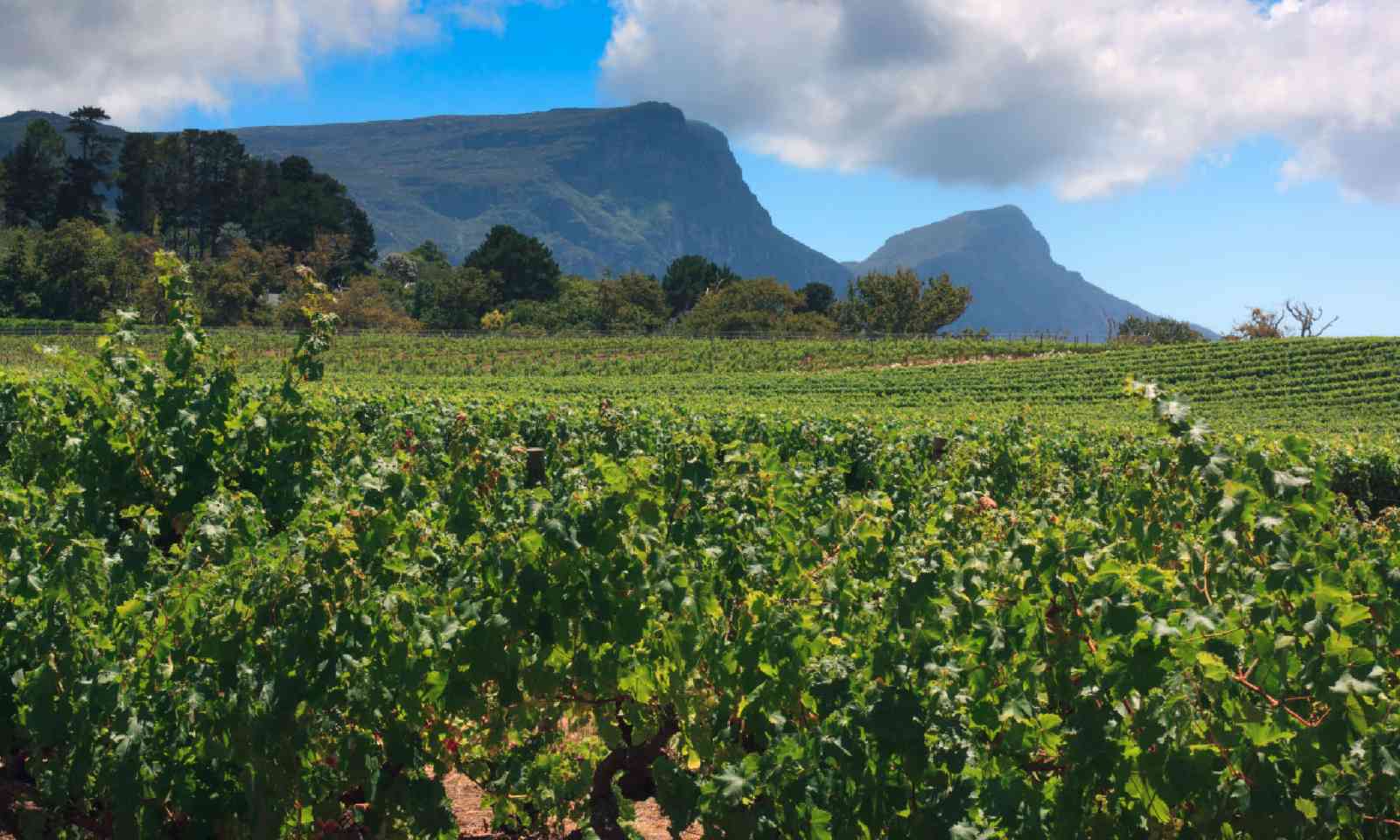 Cape Town has a decent public transport system with a cheap, reliable bus network. Taxis are good value for money and offer better safety and convenience. The hop-on/off City Sightseeing bus is an easy way to get your bearings.