South Africa’s iconic Blue Train has just changed from a one to two-night experience. Wander Woman Phoebe Smith reviews the luxury locomotive and indulges in some seriously mellow travel...

Almost as big as my fist - that’s about the size of the largest octahedron diamond in the world. I know because I was stood in front of it, in a small vault in the small South African city of Kimberley, utterly bewitched as it sparkled golden under a spotlight.

“It’s priceless,” said my guide Frank, when I asked how much a lump of this precious mineral would sell for.

Being more of a fan of carrots (the vegetable) than carats (jeweller's), I began to ponder how a naturally occurring rock could be worth so much.

Luckily, I had plenty of time to consider just that, as my visit to the museum at the romantically named ‘Big Hole’ mining site was part of my journey on The Blue Train, an iconic 1,600km African railway journey which has just increased from a one night experience to two.

Whereas, previously, it would speed through the landscapes between Cape Town in the south and Pretoria in the north, mostly at night or going so fast the view became a blur of changing colours, it now meanders its way steadily and sedately, leaving in the mid-afternoon and arriving late morning two days later, after traversing the vineyards, farmland, deserts and mountains – a quintessentially slow travel experience.

Taking a lesson from the locomotive myself, I had arrived a couple of days before it left, enjoying a slow boat trip to Robben Island, spotting south Atlantic right whales, dolphins and Cape penguins en route, a cable car ride up to Table Mountain to watch the sun set, and a quirky sidecar tour of the cape, enjoying the coast, peaks and Victorian architecture in the seaside towns move by at a top speed of just 30mph, while the sun warmed by face. 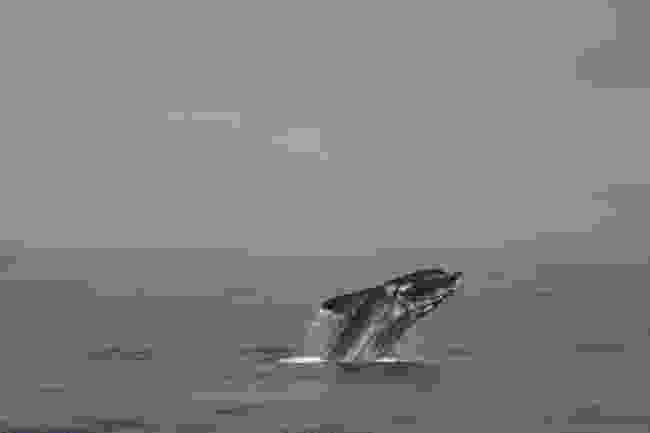 By the time I boarded the royal blue and gold livery of the carriages, I felt well and truly adjusted to what was about to become my normal pace for the next few days.

I sat in my cabin, complete with a private toilet and shower and, more importantly, a massive picture window, so clear I felt like I was watching high-definition TV from my comfy chair (that later became my bed). 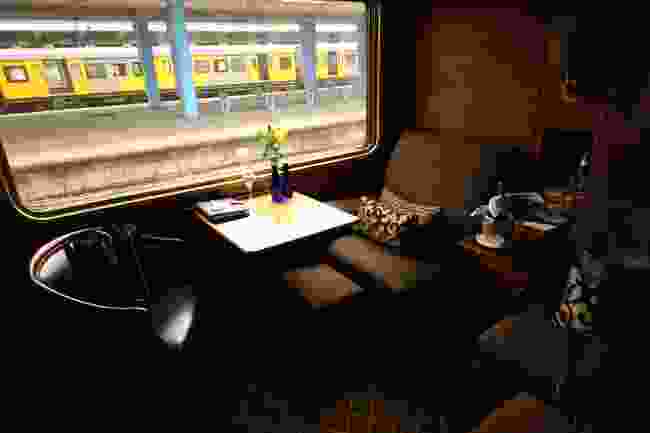 Food and drink was served constantly as we negotiated the mountain passes shortly after leaving Cape Town, snaked through the wineries of Stellanbosch (while sipping some of its finest specimens of course), and passed the Africaans stone soundwave monument at Paarl then the rising granite Boland Mountains as the sun began to turn the yellow landscape into a blushing pink.

Sleeping well after a multi-course meal I opened my blinds on day two to see that the wheat and wine fields had now morphed into semi-arid desert where the palette was distinctly ochre.

Not long after, the train arrived in Kimberley, the home to the largest hand excavated diamond mine in the world.

On the Blue Train's route: Kimberley and Pretoria 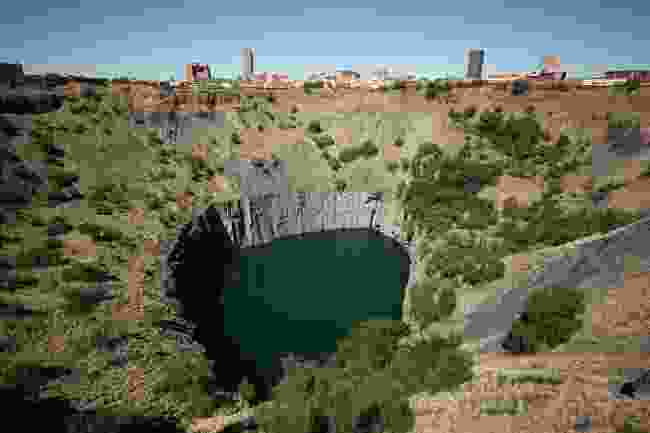 Started when a child found a sparkling stone in the Orange River, a diamond rush followed, with both Europeans and Africans racing to what was once a small, rounded featureless hill (actually an extinct volcano), to purchase land claims and seek their fortunes.

“Digging started in 1871 but by the First World War, had stopped,” said Frank. “Within that time it had yielded 2,722kg of diamonds.”

What remains now is a massive crater 214 metres deep, filled with water that has a surface area the same size as five football fields. Now kept as a museum by the DeBeers company - which owns four other diamond mines in the area - showcasing its myriad precious cuts of this million dollar mineral, its presence offers a place to pause at the site that was the first city in South Africa. 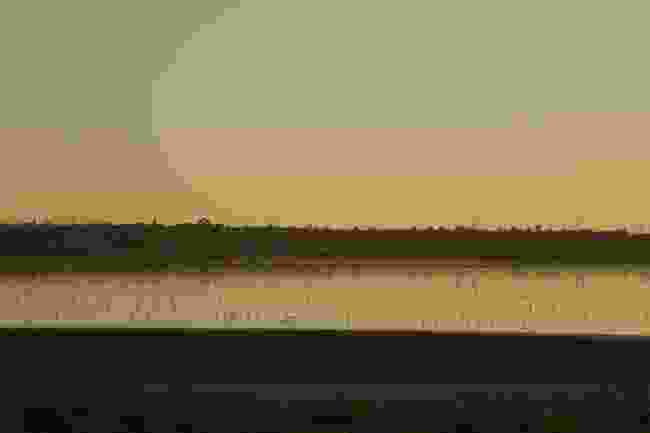 Flamingoes reflected in the lake, on the way out of Kimberley (Phoebe Smith)

While the prospectors had got excited by diamonds, I found myself far more captivated by the ever changing scenery from the railway tracks. As we left the town, the sun setting almost golden in our wake, we passed a large lake that seemed to be scattered with pink jewels.

“Flamingos,” explained the barman as a small crowd of us gathered in the observation car to watch them sparkle.

A final feast and a Blue Train Cocktail for good measure (containing far too many spirits, that made the carriages seem to sway a little more than usual) saw the night draw in and, by dawn on day three, we had already reached the suburbs of Johannesburg.

After passing the brightly coloured townships alongside the high-rises of what appeared a thoroughly modern city, the train ride came to an end in Pretoria. But I still had one more ‘slow’ experience left.

Beyond the Blue Train... to the border of Botswana 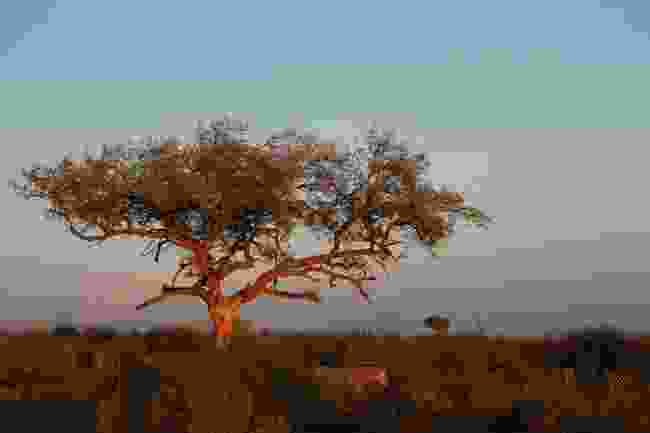 A zebra in the distance at the Madikwe Reserve (Phoebe Smith)

Four hours drive (on thankfully good roads) to the west, I headed to Madikwe Reserve, on the border with neighbouring Botswana. An intensively farmed patch of land until 1989, it now consists of 85,000 hectares of prime South African bush.

After one of the biggest trans-relocations of wildlife in the world (10,000 animals to be exact) in 1990, it now provides employment for more than 1,000 locals - compared with just 50 when it was used for agriculture - and is one of the best places to see the Big 5 (and indeed the Magnificent 7, if you include cheetah and wild dogs) in the country.

Within minutes of arriving at Royal Madikwe Lodge, I witnessed a herd of elephants drinking from the adjacent waterhole, zebra meandering in front of my terrace and kudu moving gracefully amid the bushes. 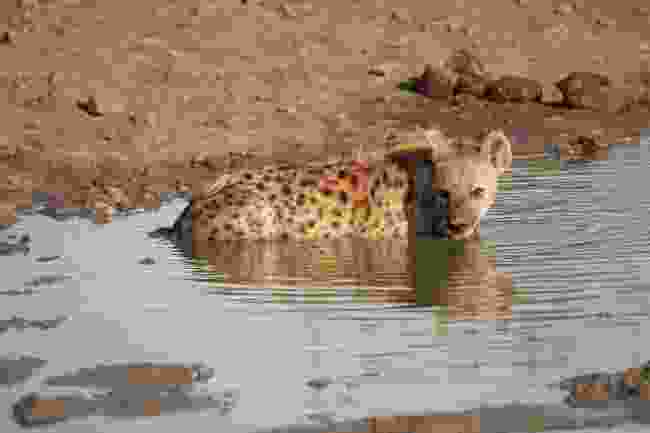 Game drives both that evening and pre-dawn the next day offered up white and black rhino, cheetah, hyena, lions, steenbok, impala, water buffalo, wildebeest and warthogs.

In the evening, astronomy expert Vincent Nettmann visited to set up his telescope to show me and my fellow guests something very special - a cluster of stars they call ‘The Jewel Box’. 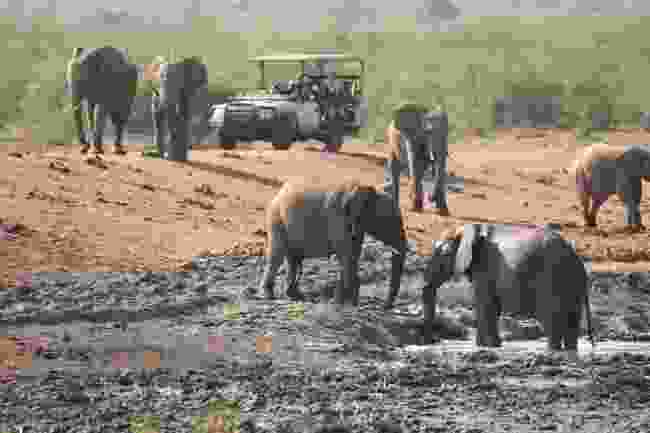 As I looked through the viewfinder intently, I marvelled at just how much I’d been able to see and experience merely by allowing myself to slow down.

South Africa is a country where people are still to this day endlessly searching underground for diamonds, gold and platinum – but, as I discovered, the real treasure is out in the bush where wild animals allow you to come so close you can hear them breathe and a single star sparkles more brightly than the largest octahedron diamond in the world.

Where Phoebe stayed along the Blue Train route 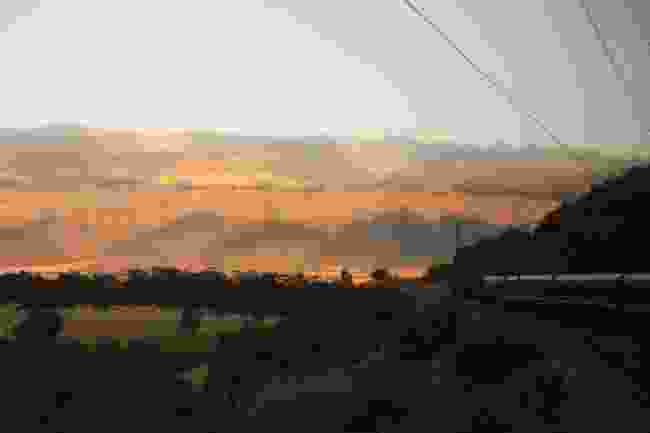 Phoebe travelled on the Blue Train with prices from £985 for the new two-night trip.

She also stayed two nights at More Quarters, Cape Town, two nights in Royal Madikwe Lodge and one night at the Saxon in Johannesburg.

7 of the best sleeper trains in the world