Solo Travel: Me, myself and Paris

As more travellers see the advantage of solo adventures, Beth Armstrong embarks alone on an escape to Paris with the help of a couple of very useful apps...

“So I’m off to Paris…” I said, slipping it smoothly into the schoolgate chatter, “...on my own.” Gasps. Mention of a postdivorce sojourn was met with understanding nods, but that wasn’t really why I was visiting the French capital. You see, anyone can embrace solo travel, not just in youth but also in middle age and beyond – and yes, even married (or divorced) folk.

Taking time out for yourself, to become immersed in a new culture and language, is the new normal. According to a 2017 report by the Association of British Travel Agents, one in nine travellers jetted off on a solo escape in the previous 12 months. But it goes beyond mere numbers. To get in touch with our instincts, follow whims, have adventures and meet new people is good for the soul; we return home full of the wonders of the world and with a new sense of self and excitement to share with those around us.

Initially it is daunting, though. To arrive alone in a country where you don’t speak the language can be worrying the first time, but technology is catching up with solo adventurers. Sites like Airbnb Experiences allow a local to show you around their favourite haunts, typically in small groups. And contrary to what they say, size is important; more intimate tours mean you blend in with locals better and can easily engage in conversation. 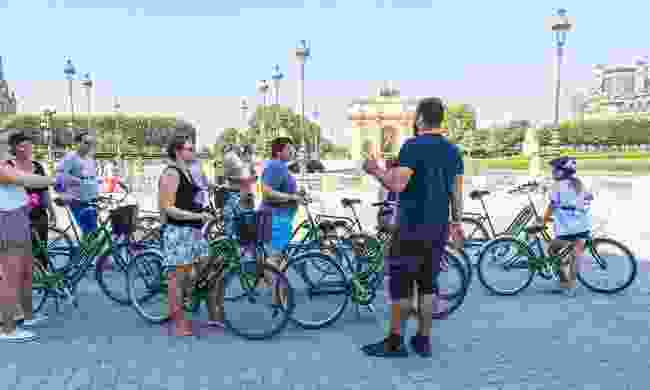 A guide with tourists before a bicycle tour of Paris (Dreamstime)

“One in nine travellers is jetting off on a solo escape – to follow whims, have adventures and meet new people”

After two nights dining alone and retiring early to French television, I bit the bullet and booked my first experience: the Marquise’s Secret Jazz Club. Hidden a few metro stops away in a stone cellar beneath a hip wine bar, I watched a singer and jazz guitarist perform to an audience of 20. It was the kind of night you either knew about or you didn’t. I met other English speakers, felt safe and not like the odd one out, then stayed on at the bar to sample some of its 50 wines by the glass.

Crowd-reviewed tour sites are a useful resource for solo travellers; you get a feel for what it’s like from other people’s experiences and, just as importantly, you can see who else has signed up. Often, there were five places taken out of the six available, so I would just slip in late and make up the numbers.

One day trip was with a young historian who took an English woman and myself on a tour of the Marais district on city share bikes, showing us his secret Paris: hidden gardens, graffiti, squares, architecture and passageways. We finished with a drink and a list of recommendations. Another night I found myself with Pablo, who runs a music festival; he cooked dinner for five of us in his loft in the tenth arrondissement, before we went to see a few bands at the kind of venues that only the locals would know about. 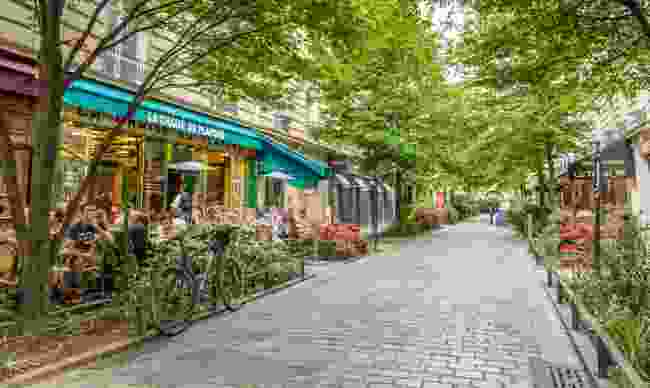 A quiet street in the bohemian Marais district of Paris (Dreamstime)

During my solo wanderings, GPS was my saviour. I happily traipsed the streets of Paris by day, listening to music on my phone, the GPS cutting in to tell me to ‘take the next right at Rue de whatever’ – Siri makes no attempt at accents. I strode alleyways and streets at a confident pace, making me feel less of a target for opportunists and bypassing those huddled over maps like shining tourist beacons. Simply switching my GPS mode from walking to public transport meant that I could stride into a metro station knowing which line to target without having to ask directions in a panic or struggling to be understood. But be sure to buy a battery phone charger, so you can power up on the run.

Other apps, such as Meetup, offered all manner of events and special interest groups that brought me into contact with expats and locals. I went to a theatre night in an old, charming playhouse to see a subtitled production of Cyrano de Bergerac. There I met people of some 30 nationalities and savoured a glass of wine and plenty of chatter before the curtain call finally arrived.

In my downtime, I practised French on the free app Duolingo and used Microsoft Translator to photograph menus for instant translation. I checked in with my family on WhatsApp and felt youthful and whimsical again, making decisions on the run and meeting travellers from afar and of all ages. Best of all, it was an exhilarating confidence boost that opened me up to new possibilities in everyday life and the rewards of stepping out of my comfort zone. When we’re younger we have an innate sense of wonder and desire to explore. There’s no reason to stop.