The railroad less travelled: taking the slow train from Bangkok to Chiang Mai

Taking the slow train from Bangkok to Chiang Mai is an adventure that unlocks 'old Thailand', a land of misty temples, golden Buddhas and epic history

The setting was a Thai palace, its gables covered in glistening gold and mirrored glass, framed against a backdrop of night sky. Dancers moved to the tinkle and pluck of Eastern instruments, wearing long, spidery fingernail rings wrought in delicate shapes. Their smiles were fixed under headdresses garlanded with orchids and amulets that twinkled in the light of the lanterns.

I was transfixed. So much so that I forgot about the table of food that lay in front of me, all courtesy of my hosts, Ame and Dong. Ame coughed loudly. “Try this one,” she said, enthusiastically thrusting a portion of steaming hot, chilli-red fish towards me. “Lan Na food. Lan Na music,” she said with a big, proud smile.

I was in Chiang Mai, the ‘capital’ of northern Thailand and once the centre of the powerful Lan Na kingdom. It was part of the country’s past that I had been curious to learn more about, and so had come up with an ingenious plan – all the while saving some cash in the process.

While most people fly the popular route betweenBangkok and Chiang Mai or take a whistle-stop highlights tour, the map showed me another way: a railway that, for around the cost of a one-day London travelcard, slowly cut south-to-north through the centre of the country.

No beaches, beer bars or designer spas. Instead, I would peer into Thailand’s historical heart, and by taking it easy I hoped to learn a lot more about its local tribes and people along the way. 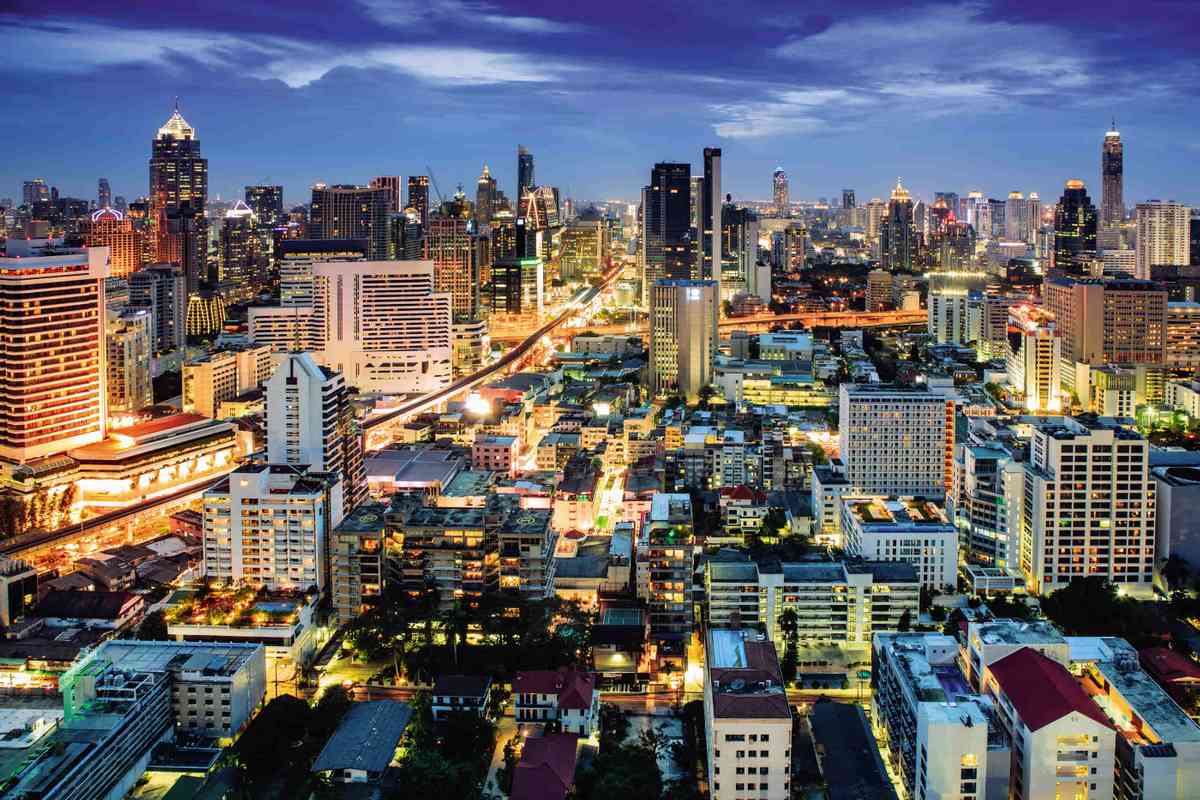 Bangkok was anything but slow. I left the airport on the sinuous Skytrain, gliding over five-lane highways, past village-sized shopping malls and on to the hotel district around Sukhumvit Road. From the window of my room, the city twinkled all the way to the horizon, hoardings as big as tennis courts beaming out bright, backlit Thai smiles while blinking helicopters hovered busily overhead.

The next morning brought a change of pace. Catching a whizzing tuk-tuk, my driver weaved and cut through traffic, passing temples and shrines squeezed between towers of glass and rows of food carts frying up pad Thai. In half an hour we were in Chinatown, where I joined a cycle tour that promised to show visitors the ‘real’ Bangkok.

Our convoy soon left the wide boulevards, wobbling slowly instead through armchair-wide alleyways clearly built before the dawn of the automobile. Cavernous shops were stacked high with rivets and engine parts, while busy stalls traded in garlands of marigolds.

We soon crossed the Chao Phraya river, a swirl of brown greened with floating water hyacinth and swollen with bus boats and rice barges, and drifted into the Thonburi distrist. I swerved past a group of laughing school children and onto a boardwalk that hugged the river, then we disappeared into backstreets shaded by tall teak shop-houses.

In a wooden, gabled temple, two women bowed before a golden Chinese goddess, and through windows I spied men playing mahjong with bottle caps under the glare of strip lights.

By the end, sweat was pouring off me, but thankfully the guide soon brought our convoy to a halt, offering much needed water and a break. “How do you like Thonburi?” she smiled. “This was where Bangkok and Thailand began, founded less than 250 years ago by a warrior called Taksin.”

It seemed barely any age at all for a city like Bangkok – let alone a country – but as my guide explained, before Taksin’s intervention, Thailand was a series of separate warring kingdoms. The most powerful was Siam, whose capital city Ayutthaya was sacked by the Burmese army in 1767. Taksin, then a general, escaped south-east to Thonburi. It was here that he founded a new capital, from which he was able to drive out the Burmese, unite the kingdoms of Siam and Lan Na and found what we know today as Thailand.

We cycled on to see the remains of Taksin’s fort and palace, passing a small, modest wooden building lost amid a web of concrete streets and overshadowed by the towering stupa of the adjacent Wat Arun, known to all as the ‘Temple of the Dawn’. 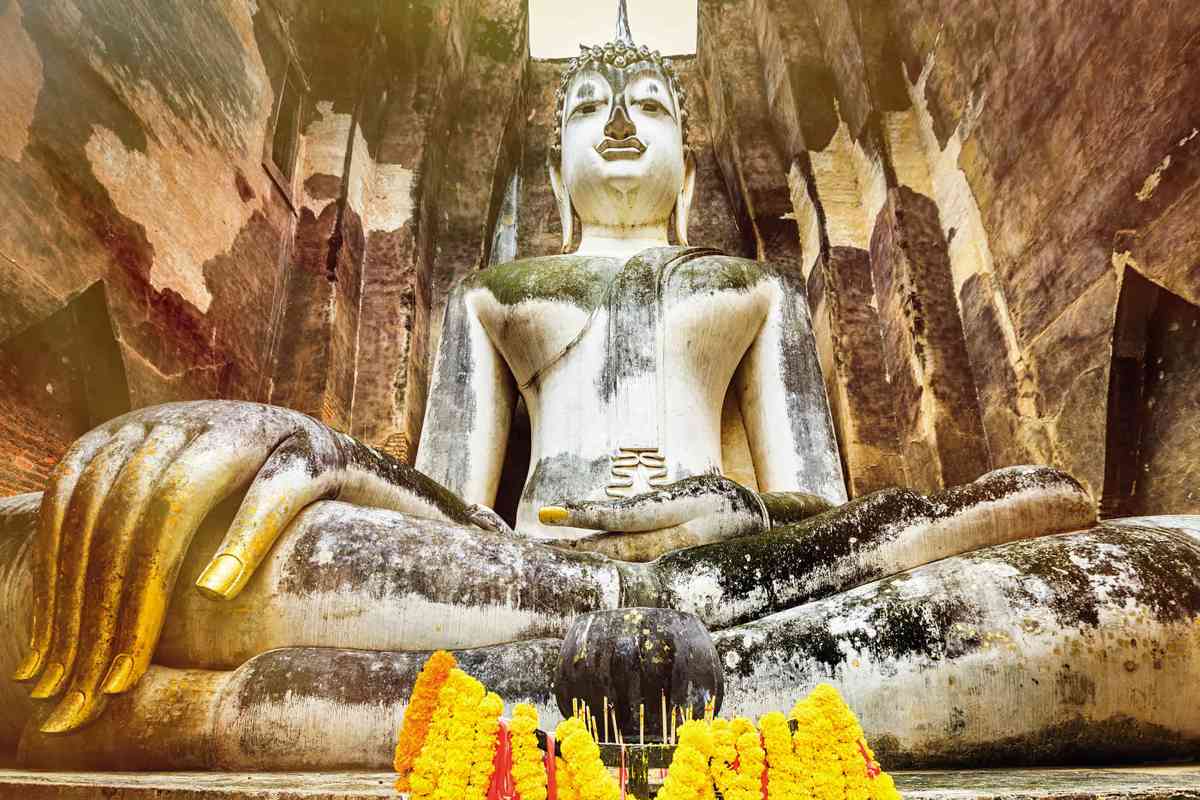 The next day I set off on my rail journey to Ayutthaya, once the power centre of Siam. Shattered during the Burmese invasion, its ruins looked astonishingly peaceful lying on a floodplain by the Chao Phraya river, pinnacled with crumbling pagodas and shaded by bodhi and banyan trees. The tendrils of one embraced a Buddha, leaving only its face exposed in a filigree of roots. Pink lotus flowers bloomed in the canals while butterfIies played in the warm air.

It was hard to imagine the violence that encircled it in 1767, when the palace was stripped of its jewels and the 33rd Siamese king was murdered on its steps. Back then, the consequences for its people were worse: an estimated 30,000 were transported to Burma as war captives; others were simply cut down where they stood, their bodies left scattered on the plain.

Back on the train and heading north, my next stop was the city of Phitsanulok, another former Siamese capital. At the station, my grinning guide found me easily – I was the only foreigner. Her name was Ancha and she promised that I’d arrived in a special place.

Our first stop was the Wat Phra Sri Rattana Mahathat temple, where mothers with their shopping giggled as I knelt earnestly before one of South-East Asia’s most beautiful and precious Buddhas. Gazing up, the statue glowed like the setting sun under the temple spotlights, and atop its head shone a lotus petal corona of lace-fine gilt metal.

We then drove north to the ruined city of Sukhothai, once Siam’s most powerful city until it was overtaken by the might of Ayutthaya. Ancha showed me stupas covered in fronds, flowers and effigies.

Then, rising up before me, I saw a giant seated Buddha – as tall as a skyscraper – its hand shining thanks to decades of pilgrims pressing on devotional gold leaf. Nearby, amid the trees, lay ancient kilns littered with 700- year-old fragments of celadon pottery, once exported as far as China.

Ancha took me further north to the ruins of Si Satchanalai, the ‘second city’ of the Sukhothai powerhouse. For hours I wandered through vast jungle-covered ruins. Monkeys played in fig trees and brilliantly coloured tropical birds floated from the branches. 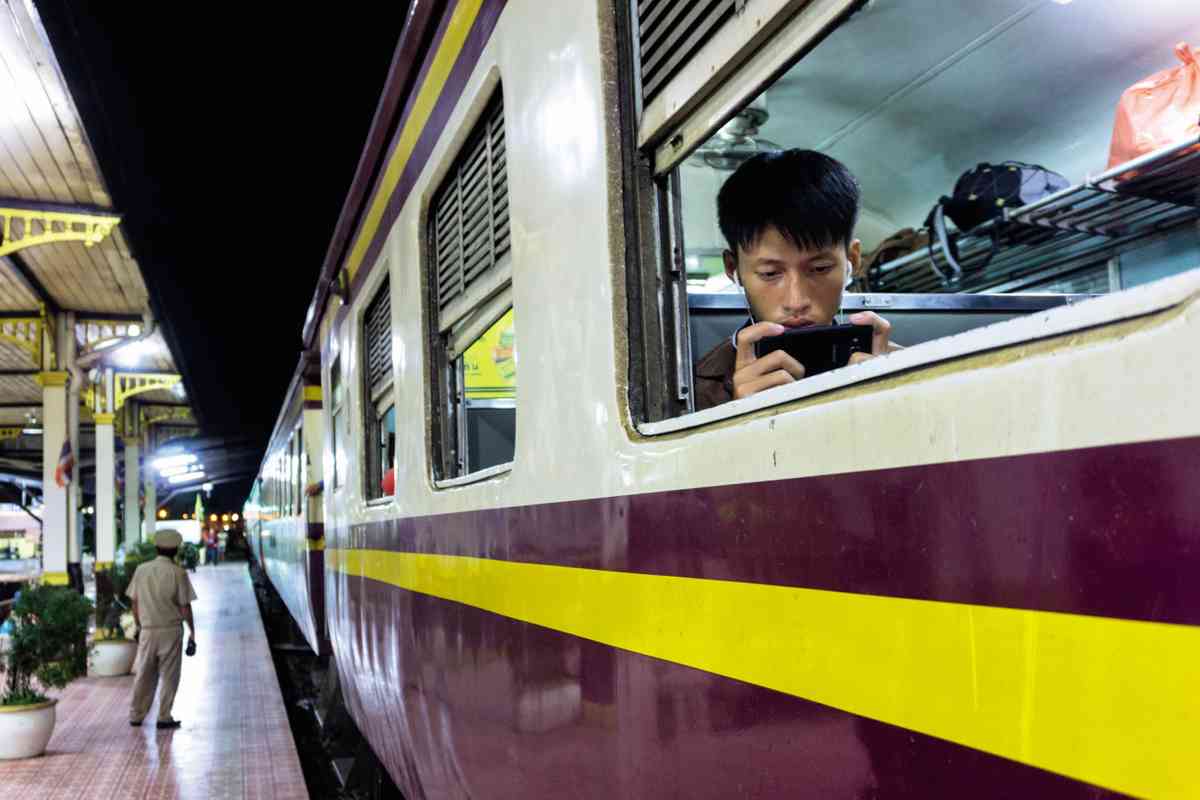 Back on the train the next morning, I found that I was sharing a cabin with a young couple on their way home to Chiang Mai. They introduced themselves politely as Ame and Dong, in perfect English. Their faces were as pale as milk, with jet black hair, straight noses and high cheek bones. I asked if they were Thai?

“That depends. Here in the north we prefer to think of ourselves as Lan Na,” explained Ame. “It’s the old name for northern Thailand.”

“An old kingdom like Siam?” I enquired. She nodded. But if Siamwas England, she explained, then Lan Na would be Scotland – a historically restless neighbour with a long, proud history.

Dong was delighted to discover that I was English. “Did you know it was Buddhist magic that won the Premier League for Leicester City?” he asked, producing videos on his phone of the football club. He showed me monks blessing goalposts and its billionaire Thai owner draped in a dazzling string of amulets.

“Those amulets are blessed by saints,” said Ame. “Thai people believe they have the power to bring protection or good fortune – they cost millions of baht.”

I pondered where I might find my own set on the cheap and waved the couple goodbye at Lamphun – my final stop and a key city in Lan Na history. I left the station to discover a pretty, provincial town wrapped around the Wang River and stapled with small bridges.

It was reportedly founded by Asia’s first Buddhist Queen, the semi-legendary Mon tribeswoman Cama Devi some 1,200 years ago, before tribes led by Lan Na king Meng Rai conquered it in 1281 AD. He went on to found his capital in Chiang Mai.

These days, the area is better known for its timber. The hills around Lamphun are washed in dark green woods dripping with waterfalls. For centuries, elephants have worked these forests, lugging its precious teak. It was here I visited the Friends of the Asian Elephant hospital, where animals from the logging and tourist industries go to be treated.

Many had suffered wounds in their heads from the sharp metal spikes used by the mahouts. The hospital tries its best to educate owners as well as help the animals, and when I visited I witnessed one elephant learning to use a prosthetic limb moulded out of rigid plastic. It was impossible not to be heartened at the sight.

The next day I wandered the back alleys around Nimmanhemin Road and found funky coffee bars, chic boutiques stuffed with Thai home décor and silks, and an antique shop with shelves of glittering silver temple bowls and jewellery. The owner told me that Elizabeth Taylor once shopped here. It was then that Ame rang and invited me to dinner and a dazzling Lan Na show. 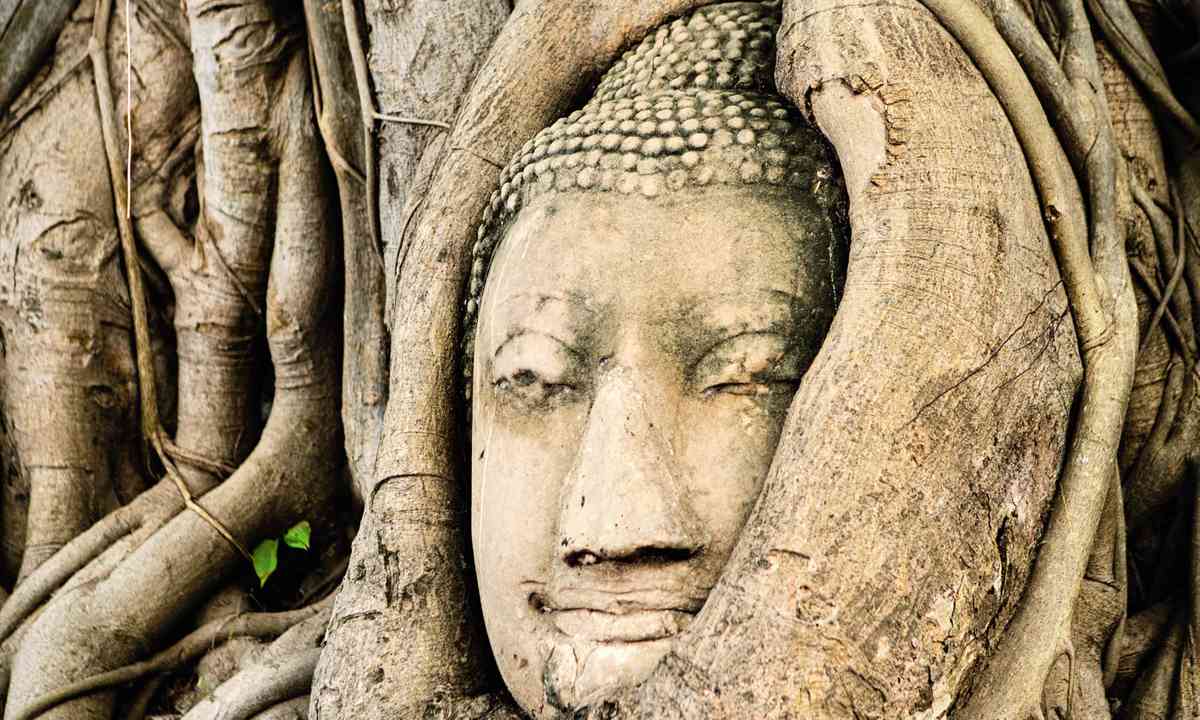 The railway doesn’t go beyond Chiang Mai. But Thailand does. I spent my final two days on a trek exploring the fringes of what was once the Lan Na kingdom. It was here in the mountains where South-East Asia began – when Mon and Shan tribes wandered across from Burma, Tibet and China thousands of years ago and discovered the fertile plains around the Chao Phraya and Mekong rivers.

Like those tribes, I walked the edge of a rushing mountain river, albeit with a guide. We passed a waterfall and climbed through a Shan village where locals in hand-woven sarongs and modern T-shirts waved to us. In late afternoon we reached a village perched over a deep valley and, after dinner cooked on a charcoal stove, I sat with an old man who offered me a heavy tobacco-filled cheroot.

He told me he was from the Karen tribe and that he arrived here in the 1940s as a teenager from Burma, fleeing Japan’s bombers and its ‘Death Railway’, the infamous Burma-Thailand railroad cut through the jungle by prisoners of war and Asian labourers – its construction cost more than 100,000 lives. His family came later, he said, escaping the Burmese army, and today, a millennia after the Mon and Shan arrived, people continue to spill into the Lan Na region over the mountains. Thailand is still being born.

The next day we left early for Doi Inthanon, Thailand’s highest point. A trail climbed through woods that thickened into forest and hornbills drifted from the branches across valleys. There were no cars, no planes. Even the ruined cities of Sukhothai and Ayutthaya seemed an age away. On its slopes, two stupas watched over oriental gardens perfumed by fragrant flowers. Below them rippled blue-green ridges, as the sun, a giant red ball, cast forth shafts of amber over the scene.

I soon realised I was looking south, back the way we had come. I stared out over the tribal hills, into Lan Na and across old Siam. I made the right choice not to take that highlights tour, I reflected. No Bucket List can include a country's stories, its memories or its heart.

The author travelled with Revealed Travel (southeastasiarevealed.co.uk, 01932 424252), who offer a bespoke trip, including train travel from Bangkok to Chiang Mai, stopping at Ayutthaya, Sukhothai, Lamphun and other cities on request, plus flights, transfers, B&Bs and guided excursions. Ask for Ancha Thakham (facebook.com/ancha.thakham), a superb guide of Lan Na heritage.