Travel guide to the Shropshire Hills

There’s something alluring about the quiet, rural, myth-laced and castle-dotted ‘Little Switzerland’ of the landlocked – and overlooked – West Midlands. Lyn Hughes gets her boots on

‘Switzerland without the avalanches and wolves.’ That was how the Shropshire Hills, and the market town of Church Stretton at its heart, were once promoted. The tagline was at least half right: as I strolled through nearby Little Stretton on a summer evening, the soundtrack was of baaing sheep rather than the howling of anything lupine.

Quiet, rural, lowly populated Shropshire was a tourism ‘secret’ until recreation-seeking Victorians discovered it from the mid-19th century. Subsequently, the hills became a place to holiday, with Church Stretton turned into a spa resort where visitors could play croquet, take walks and enjoy the fresh country air. 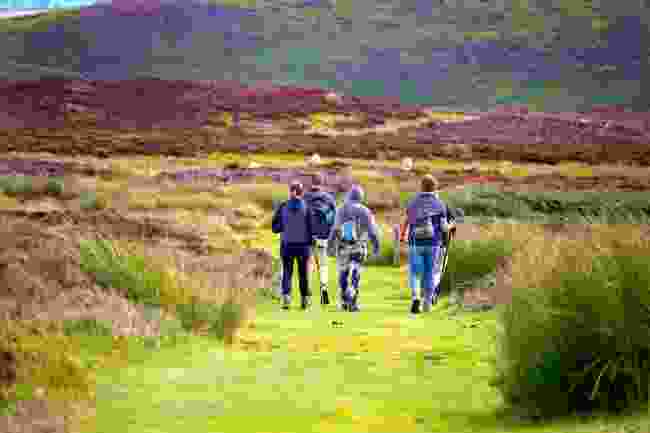 Today the Shropshire Hills are encompassed in a namesake Area of Outstanding National Beauty (AONB) that covers much of the county’s south. And while West Midlands lad AE Housman’s ‘blue remembered hills’ may not be as spectacular as the Swiss Alps, they do possess their own quiet beauty.

Not that it has always been peaceful here. Shropshire falls within the Welsh Marches, the historically turbulent border region with Wales; it also suffered invasions by the Vikings in the ninth and tenth centuries. It’s no surprise, then, that 32 of England’s 186 castles are found in the county. My first stop was at one of them, Stokesay, a fortified manor house built in the 14th century for wealthy wool merchant Laurence of Ludlow – at the time, one of the richest men in Britain. Indeed, Shropshire’s hardy and versatile sheep, prized for both their wool and their meat, have played an important part in the economy here over the centuries.

While Ludlow, gateway to the Hills from the south, is a deservedly popular honeypot, visitors to the Shropshire Hills continue to come for the tranquillity, the walking and views, and the well-preserved villages and historic sites. “We love the peace and quiet and the lack of development; we try to come at least once a year,” said one couple I bumped into. Another pair told me they had finally moved to the area after many years of visiting. “People fall in love with this place.” 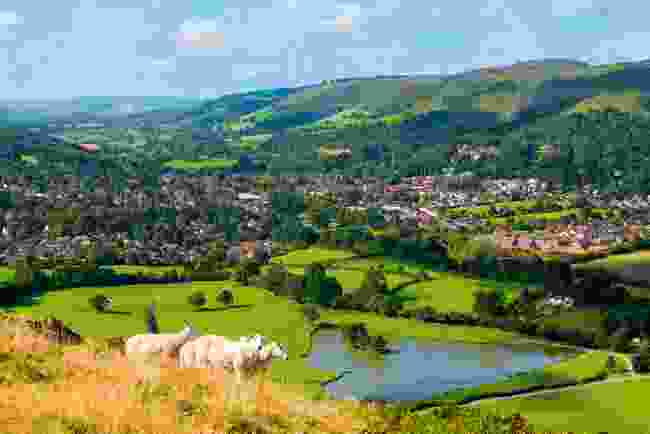 Stretch your legs on the Long Mynd. There are numerous ways to access this rolling upland heath but you could start at wildlife-rich Carding Mill Valley and take one of the many trails to the Long Mynd’s high points. Alternatively, cheat by driving up via the single-track road, parking and walking from there; a shuttlebus also travels across the plateau in peak season. You’ll be rewarded with views west to Wales and east to the Wrekin, Shropshire’s volcano-shaped hill. Sheep and ponies graze among the heather and skylarks sing.

Refuel at the Bridges Pub in Ratlinghope before heading to the Stiperstones for more far-reaching views. Comprised of quartzite formed 480 million years ago, this rocky ridge is rich in myths and legends. Look out for witches.

After all this exploring you’ll be ready for dinner. Try a traditional pub such as the Ragleth Inn or Green Dragon in Little Stretton. While there, admire the unusual thatched mock-Tudor church. 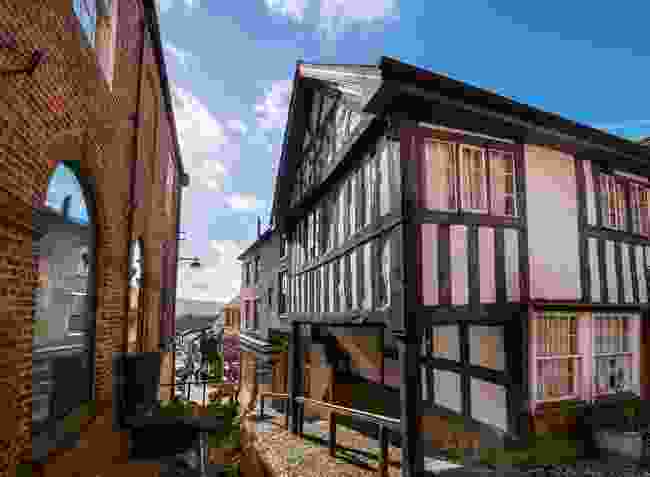 Explore the south-west of the county, visiting tiny Clun and its ruined castle. Nearby Bishop’s Castle was founded by Norman bishops and the town is laid out in medieval style. It’s also home to two breweries, including the Three Tuns, established in 1642 and is the oldest working brewery in Britain.

Alternatively, drive north-east, following Wenlock Edge, a limestone escarpment with views and trails. The medieval market town of Much Wenlock’s  claim to fame is that, having launched its own Games in the mid-19th century, it’s heralded as the inspiration for the modern-day Olympics.

After a pub lunch explore the ruins of Wenlock Priory. The first monastery was founded here in AD680, led at one point by St Milburga; the discovery of her relics in around 1100 brought new prosperity and pilgrims from around Europe.

Around 10km further north-east is UNESCO-listed Ironbridge, home to the world’s first cast-iron bridge. It is the place to learn about the industrial revolution – there are ten museums clustered here.

Things to do in the Shropshire Hills 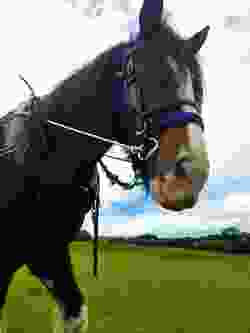 EAT fantastic local produce. Not only is Ludlow a handsome town with a looming castle, it’s a delicious foodie hub, with a renowned annual food festival and some excellent restaurants, shops and producers. If self-catering, stock up at Ludlow Farmshop.

WALK all over the place. Whether you’re a seasoned hillwalker or just want a gentle ramble, this is a place to discover on foot. The Shropshire Way is a 290km figure-of-eight trail through some of the county’s best countryside and can be walked in sections. There are also many short, circular walks. shropshireway.org.uk

WALLOW in history. Ruined castles, hill forts, heritage churches, industrial revolution history, preserved medieval buildings – you’ll find them all here. And you’ll have the space and peace to enjoy them. You might want to consider getting an English Heritage membership at english-heritage.org.uk

HARNESS a shire horse. Whether you’re used to handling horses or not, a hands-on experience with Shire and Carriage Horses is a great day out. Steve Ledsham makes an entertaining and informative host as he takes you through harnessing, long-reining and driving the handsome animals.

Getting there: The Shropshire Hills lie between Shrewsbury (to the north) and Ludlow (to the south), which are connected by the A49. Church Stretton and Craven Arms are on both the Welsh Marches and Heart of Wales Line railways. On weekends in season, shuttlebuses run between Carding Mill Valley over the Long Mynd to the Stiperstones.

Stay at: Mynd House B&B in Little Stretton is friendly and knowledgeable, serves good breakfasts and is located an easy walk to two good pubs. Victoria House is a beautifully furnished and characterful B&B in the heart of Church Stretton.