At various times in its history, Croatia’s largest port was part of Austria-Hungary, Italy, Germany and, briefly, even its own city state when it was occupied by the proto-fascist poet Gabriele d’Annunzio. But for a city that’s been bounced between several empires and manages to hold 22 ethnic minorities, Rijeka doesn’t seem to have an identity crisis: it’s cosmopolitan, multicultural and even at times a bit anarchic – it was the hotbed for Yugoslavia’s punk scene – which has all fed into the city’s rich cultural heritage. Being designated one of 2020’s European Capitals of Culture has given a further boost to Rijeka’s cultural institutions such as the 1885 Croatian National Theatre and its cutting-edge Museum of Modern and Contemporary Art.

But visitors will find the essence of Rijeka in its pedestrianised thoroughfare, Korzo. Handsome Habsburg buildings mingle with a few Tito-era additions, filled with shops and lively café terraces. Thronging most of the time, it becomes riotous during big events, especially the February carnival. Look out for side street Kružna, which shows off Rijeka’s rebellious streak in its creative street art. When you spot a painting of Motörhead’s Lemmy, you’ll have arrived at Palach cultural centre, where the city’s punk scene flourished.

Rijeka’s Italian legacy is written on its menus, which combine with Austrian, Hungarian and Croatian flavours. Standing in front of the imposing 19th-century Hotel Continental by the Rječina River, you’ll discover you’re on the old border between Italy and the Kingdom of the Serbs, Croats and Slovenes, the precursor to Yugoslavia (which Rijeka didn’t become a part of until 1947).

Follow the waterway to the Riva, a seafront street dominated by the, neo-baroque Adria Palace, now home to the Jadrolinija ferry company. It’s close to the launching point for ferries to the Kvarner Gulf’s islands – Cres, Lošinj, Krk and Rab – that visitors usually rush past Rijeka to reach. They’re missing out on a fascinating, multi-faceted city. 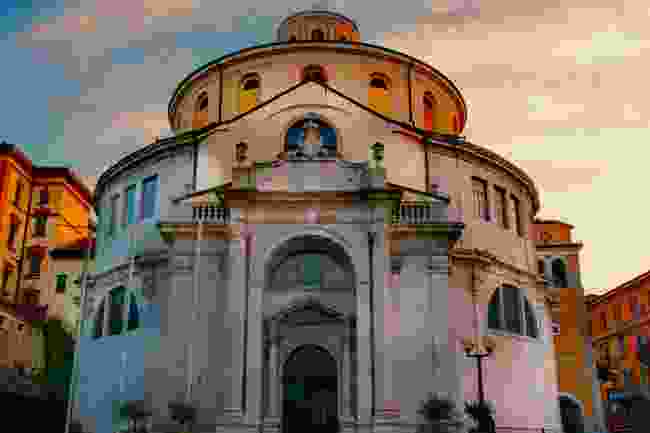 The Cathedral of St Vitus: a feature of both Rijeka and the 100 kuna note (Shutterstock)

Start the morning near the port in Croatia’s best fish market. Within this vast 1916 temple to seafood, elaborate arched columns, fountains and sculptures provide a dramatic backdrop to the slabs of Istrian stone displaying a fabulous selection of fish and seafood. Back on the Korzo, walk under the arch of the City Clock Tower and into an atmospheric cluster of restaurant terraces and Roman ruins. You’ll soon spot the 17th-century rotunda-shaped Cathedral of St Vitus (which also features on the 100 kuna note).

Head towards the Maritime and History Museum of the Croatian Littoral if you want to try make some sense of Rijeka’s complicated history. It’s set in the ornate governor’s palace (designed by the same architect behind Budapest’s parliament), and also features a lifejacket worn by a Titanic survivor.

Nearby is the rather endearing PEEK&POKE Museum, where you can unleash your inner geek. It’s crammed with vintage computers, games, gadgets and technology, some of which you can play with. 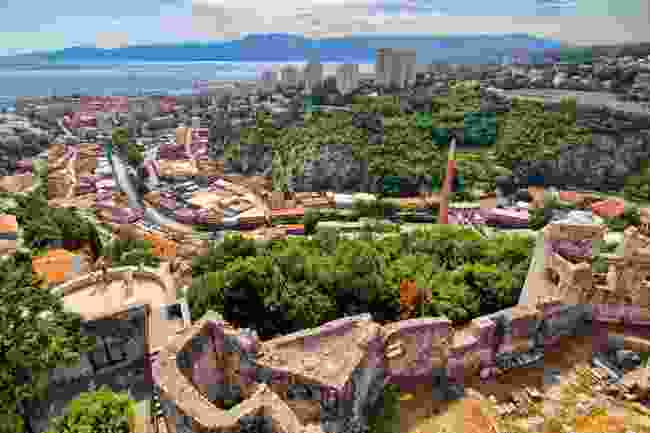 Trsatske Stube, a stone staircase that leads up to Trsat Castle leads to views of Rijeka (above) and the Kvarner islands beyond (Shutterstock)

Just north of the Hotel Continental is Trsatske Stube, a stone staircase that leads up to Trsat Castle (free) – a highlight in more ways than one. Lording it over the city, this 13th-century fortress has views of Rijeka (pictured left) and the Kvarner islands beyond, and is a pleasant place to while away an hour. Next door is the Franciscan monastery whose Shrine of Our Lady of Trsat is a key place of pilgrimage, and whose adjoining gardens are a ideal place for a contemplative wander.

Back in centre near the national theatre, feast on grilled fish at Konoba Feral before a glass of Croatian beer or rakija (brandy) at Caffe Bar Filodramatica in Korzo. At Bar Bar near the Roman ruins, order some tapas-style snacks of pršut (like prosciutto) and tuna pâté as you try the crisp white žlahtina wine from Krk. 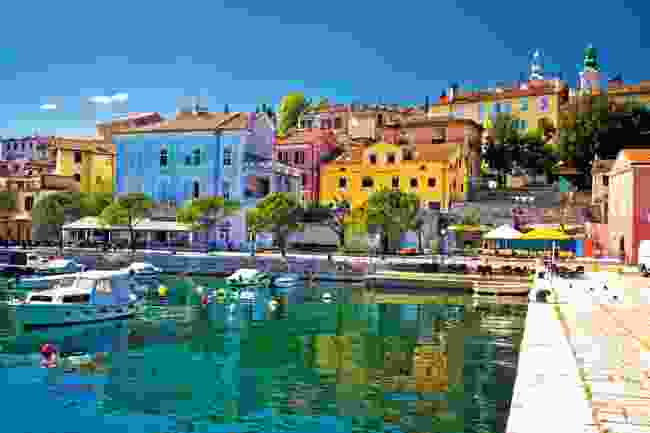 A 30-minute bus ride south-west  of Rijeka takes you to the birthplace of Croatian tourism, the Opatija Riviera, where the Habsburgs created their seaside playground in the 19th century after falling for the area’s mild Mediterranean climate. Opatija is the centrepiece, an elegant town of pastel-coloured 19th-century villas and hotels.

Stroll through the manicured gardens of Angiolina Park, past the handsome 1844 Villa Angiolina, the fascinating Croatian Museum of Tourism and the open-air theatre; then stop at the Bistro Yacht Club in Opatija’s dinky harbour for a platter of octopus salad, prawn carpaccio and bakalar (creamy salted cod).

One of the best ways to discover the area is to follow the Lungomare, the 10km promenade that starts in the fishing village of Volosko (pictured left) to the north and ends in Lovran, home to a charming old town as well as one of Croatia’s five Michelin-starred restaurants. 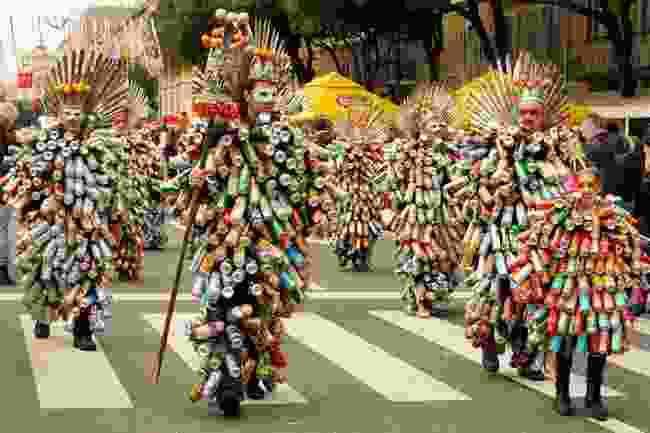 Visit Rijeka in late January to experience the Carnival (Shutterstock)

When to go: May to October to get the best of the weather; late- Jan to Mid-Feb for the Carnival.

Top tip: Direct flights to Rijeka airport (actually on the island of Krk) are only available during summer. Flights to Pula airport (2hr drive) are only from late spring to early autumn. Outside those months, you can fly in to Zagreb (2hr drive).

4 things to do in the Kvarner Gulf 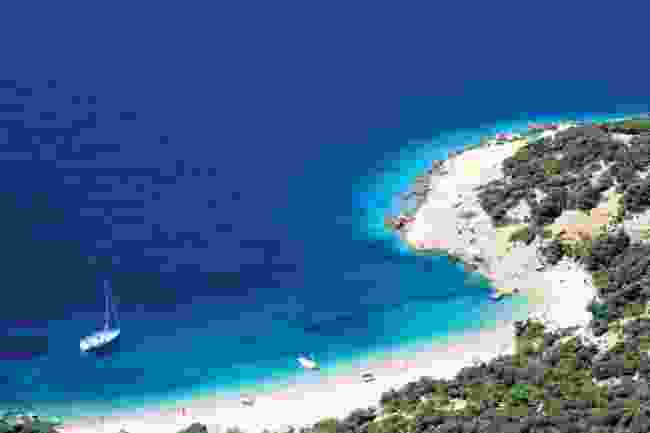 The island of Cres: a must-see of the Kvarner Gulf (Shutterstock)

1. Try island hopping: Croatia’s two biggest islands, Krk and Cres, are in the Kvarner Gulf and are appealing options for longer stays. Explore Krk Town’s medieval streets and 12th-century Frankopan Castle before discovering the rustic wilderness that covers most of the island of Cres (above).

2. Go back to nature: Učka Nature Park hovers over the Kvarner Gulf’s western coastline. Follow its hiking trails past mountain streams and springs, keeping eyes peeled for griffon vultures. Hike its highest peak, Vojak (1,401m) for sweeping views of the Adriatic, the Velebit mountains and, on a clear day, the Alps.

3. Get a buzz: Head into the hills above the small town of Ičići to the Depoli family farm, where Želimir Depoli and his wife Vivien can show you the basics of beekeeping before offering a tasting of their delicious honey alongside a platter of meat and cheese. (opg.depoli@gmail.com)

4. Join the celebrations: Rijeka hosts one of Croatia’s biggest parties when its pre-Lent carnival begins from late-January. Although events happen all around the region throughout the following month, it’s the main carnival parade usually held just before Lent that you won’t want to miss.