Lübeck – the ‘Queen of the Hanseatic League’ – is a German gem. Come for magnificent medieval streets, mouth-watering marzipan, three Nobel Prize winners and a quick trip to the Baltic seaside

Encircled by the Trave River, the island-set city of Lübeck is one of Germany’s most charming towns – a cluster of centuries-old Gothic redbricks, dreamy spires and tight-packed alleys rich in medieval character.

An important port on the Baltic coast, Lübeck rose to prominence from the 12th century due to the boom of its trade organisations; it was dubbed the ‘Queen of the Hanseatic League’, becoming a major player in the powerful confederation of merchants that dominated commercial activity in northern Europe in the Middle Ages. One key commodity was salt, highly valued at the time for preserving food. This ‘white gold’ was mined at nearby Lüneburg and transported along the Old Salt Route to Lübeck, from where it was shipped to distant ports.

Lübeck developed a sweet tooth, too. The city lays claim to producing the world’s best marzipan – some even say it was invented here, in 1407, when the grain stores ran empty and the city’s bakers had to make bread with almonds. Maybe, maybe not, but locals have embraced the nutty paste and it has become a speciality.

Evidence of all this history can still be seen today, from the old riverside warehouses to the sweet-scented confectioners. Allied bombs did do some damage – air raids in 1942 saw around one-fifth of the Old Town destroyed, including the cathedral (now reconstructed). But plans to raze the city in 1944 were aborted, leaving the basic structure of the old centre largely intact. Indeed, in 1987 Lübeck became the first town in northern Europe to be added to UNESCO’s World Heritage list.

Among Lübeck’s enduring monuments is the Holsten Gate (Holstentor), one of its two surviving medieval gateways. Comprising twin turreted towers bestride a fine arched passageway, the Holstentor has become the icon of the city – and the best place to begin a fascinating city break… 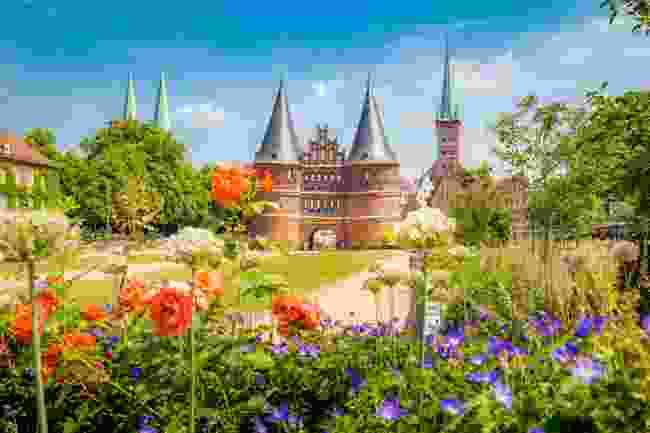 The Holstentor in Lubeck, Germany (Shutterstock)

Walk between the brick towers of the Holstentor, an impressive entrance to Lübeck’s beautiful Alstadt. Look right: on the banks of the Trave you’ll see the Salzspeicher, a row of handsome old salt warehouses.

Explore the old town, including the market square. On one side is the 13th-century Rathaus, the country’s oldest town hall. Next door is Café Niederegger, the spiritual home of marzipan – as well as serving it, there’s a Marzipan Museum upstairs.

Keep wandering, pausing for lunch at the Schiffergesellschaft (Breite Strasse 2), which has been serving for some 500 years; try a traditional labskaus, a dish of salted meat, potato, herring, egg and beetroot. Finish at Dietrich’s Bar (Untertrave 108) with a Königin der Hanse marzipan-flavoured gin, created for Lübeck’s 875th anniversary in 2018. 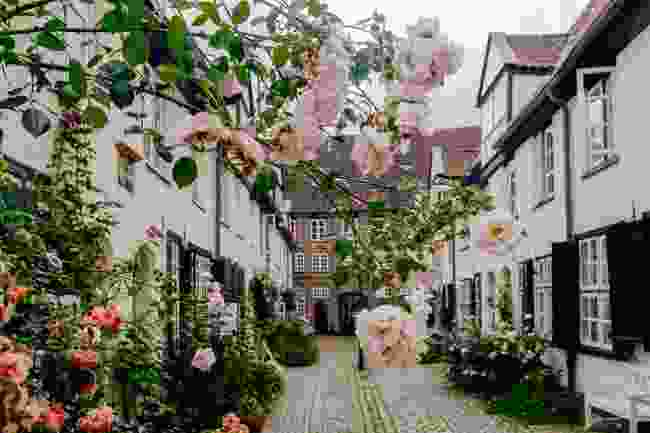 Today, meet Lübeck’s three Nobel Prize winners, starting at the Buddenbrookhaus (Mengstrasse 4), an evocative museum that delves into the mind of Thomas Mann by recreating scenes from The Buddenbrooks, his strongly autobiographical novel.

Nearby is the Günter Grass-Haus (Glockengiesserstrasse 21), dedicated to another of Lübeck’s literary geniuses. The museum has a thought-provoking display of Grass’s works. A few doors along is Glandorps Gang; peek down this alley to see a 13th century courtyard of almshouses.

Also nearby is the Willy Brandt-Haus (Königstrasse 21), a free museum in Brandt’s birthplace, dedicated to the Nobel laureate and first Social Democratic Federal Chancellor.

Finish up with a Jever beer at Tonfink (Grosse Burgstrasse 46), the city’s best live music bar. 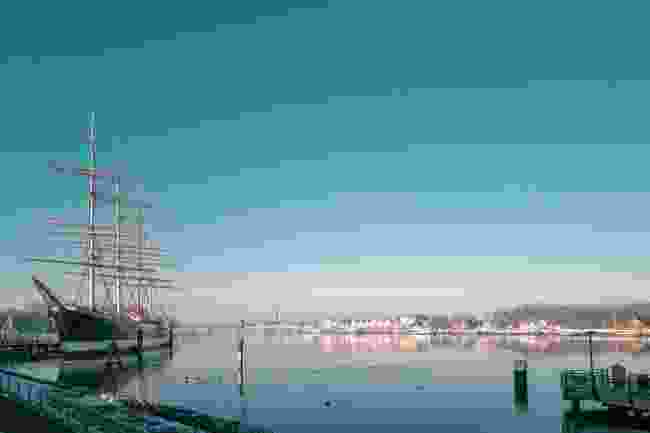 The Passat in Travemunde (Shutterstock)

The Trave River flows into the Baltic Sea at the resort town of Travemünde, 20 minutes by train from Lübeck. This is the place to experience a traditional German beach holiday: stroll along the promenade, sink your toes into the fine white sand, unwind at the Strandperle Beachbar & Grill and watch giant ferries set sail for Scandinavia. If the weather permits, hire your own strandkorb, a classic canvas-covered wicker beach chair.

Explore Travemünde’s history at the Seaside Resort Museum, which charts the town’s tourism evolution since 1802. Then learn about the creatures beneath the Baltic at the Ostseestation marine centre on the Priwall peninsula.

Also on the Priwall is the Passat. Built by German shipping company F Laeisz and launched in 1911, this four-masted barque is one of the last of its type. Docked here since 1960, it’s now a museum and a town icon. 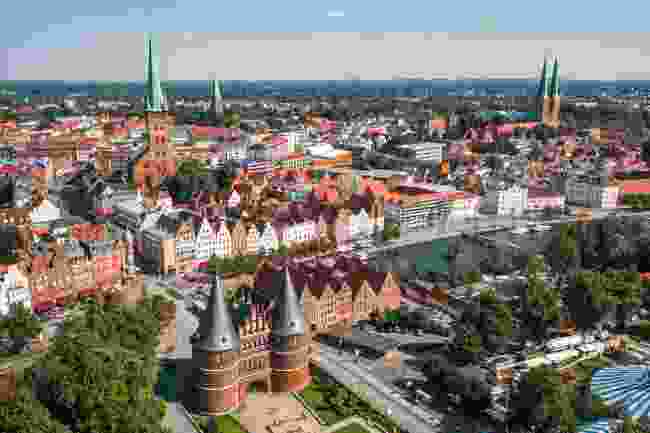 Budget Altstadt-Hostel CVJM Lübeck Housed in a Hanseatic redbrick, this hostel offers good value for money, with clean and comfy rooms (from ten-bed dorms to two-person studios), kitchen facilities, on-site dining and a brilliant location in the heart of Lübeck’s Old Town, an easy walk from the main sights (Grosse Petersgrube 11).

Midrange Hotel Lindenhof This family-run hotel by the train station offers good old-fashioned hospitality. Rooms aren’t polished but are spacious and comfortable. There’s a communal sauna and a guest lounge with free coffee. Breakfasts are generous and include cold cuts and cheese, pickled herrings and organic bread (Lindenstrasse 1a).

Luxury Hotel Anno 1216 Historic ambience meets modern design. Situated in one of the oldest redbrick buildings in the city, it sits on historic Alfstrasse, near the river. Atmospheric rooms have beamed ceilings, parquet floors and antique furnishings as well as mod-cons and large, plush beds (Alfstrasse 38).

When to go: Lübeck has a relatively mild maritime climate. Visit in May for the Spring Fair and Brahms Festival, July-August for the Schleswig-Holstein Music Festival and November-December for excellent Christmas markets.

Wine and walking in Germany: A 2-centre city break in Stuttgart and Ludwigsburg