There’s a welcome lack of pretension about La Rochelle. This is undoubtedly the most appealing port on France’s Atlantic coast, its large harbour guarded by two hulking great 14th-century towers. The square Vieux Port teems with restaurants and bars, keeping the almost permanent buzz at a pleasant level.

Although visitors throng the quaysides in high summer, there’s a sense that the city isn’t existing purely for them. This is a working port with a busy fishing industry, and it wears its beauty lightly, preferring not to make a song and dance about it.

As laid back as it seems now, La Rochelle was always a bit of a rebel. It suffered for its switch to Protestantism during the French Wars of Religion, and came out badly after being besieged in 1627 by Cardinal Richelieu and the royal troops. But it picked itself up and became a major port in the trade between France and her overseas colonies.

Then in the 1970s, La Rochelle’s mayor shocked France by daring to banish cars from the historic centre. Unheard of at the time, the idea of pedestrianising old towns has since become standard. It’s also helped to preserve La Rochelle’s 17th and 18th-century pale stone townhouses and arcaded streets. 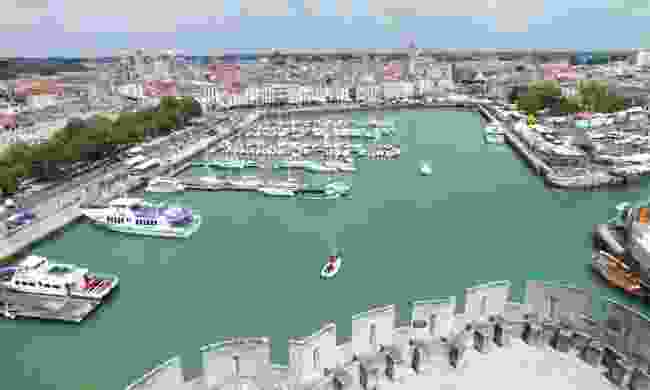 It’s the imposing medieval towers flanking the harbour that encapsulate so much of La Rochelle’s history. Tour St Nicolas, a former royal residence, has a labyrinth of spiral staircases that lead to a roof terrace and superb views of the port. Facing it is Tour de la Chaîne, which, as its name implies, used to be connected via a giant chain to its neighbour across the harbour. Inside, a permanent exhibition reveals the stories of the Rochelais who emigrated to Quebec, Nova Scotia and Louisiana over the centuries.

From here you can walk along the remnants of the ramparts to the sharp, pointy Tour de la Lanterne, which is the oldest lighthouse on the Atlantic coast. Its stone walls reveal its past as a prison, etched with graffiti from prisoners awaiting transportation to the infamous penal colony of Devil’s Island, off French Guiana.

Nowadays, life revolves around the Vieux Port, which instantly draws you into its lively ambience and the tempting sight of all those café terraces. Boats come and go from the harbour for day trips to nearby islands, including Ile d’Aix and Ile d’Oléron. Ride the cycle-friendly corniche 7km west to another fishing port, or instead head to Les Minimes, the main pleasure port and an enormous sprawl about 3km to the south of the Vieux Port. This is also home to La Rochelle’s largest beach and is another bike-friendly part of a city that’s well connected by cycle paths.

It doesn’t take long to be seduced by La Rochelle’s easy pace and casual elegance – French seaside life at its most relaxed. 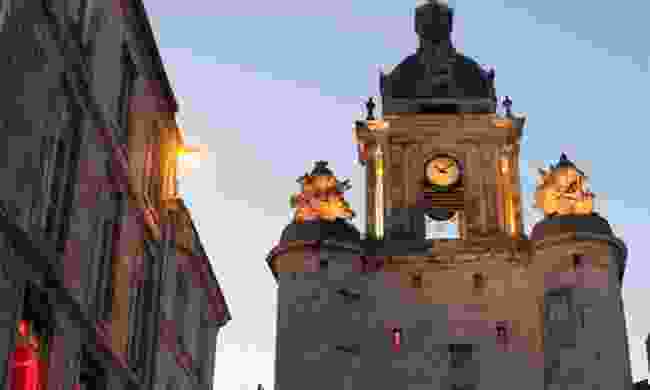 Start on the Cours des Dames by the Tour de la Chaîne, taking in the latter’s museum and the jail-cumlighthouse of Tour de la Lanterne. A single ticket takes in all three towers, including St Nicolas.

Among the many eateries on the Cours des Dames and its offshoot, Rue St Jean du Pérot, is an outpost of the city’s top ice-cream maker Ernest Le Glacier.

Refreshed, head to Quai Duperré, where you can’t miss the sight of its 14th-century Porte de la Grosse Horloge. This is the gateway to the nest of streets behind the Vieux Port, whose arcades give welcome shade. Stop by the bustling, elaborate 19th-century Les Halles market, then lunch in its neighbouring cafés.

While away the afternoon lostin alleys lined with grey-shuttered townhouses. Stop at the tiny bar-filled Cour du Temple for an apéritif, then head to the port via Rue St Nicolas, an eclectic street of quirky indie shops and convivial bars. Look out for the deliberately shabby Cave de la Guignette, housed in an old forge, and get there for a glass of wine before it closes at 9pm. 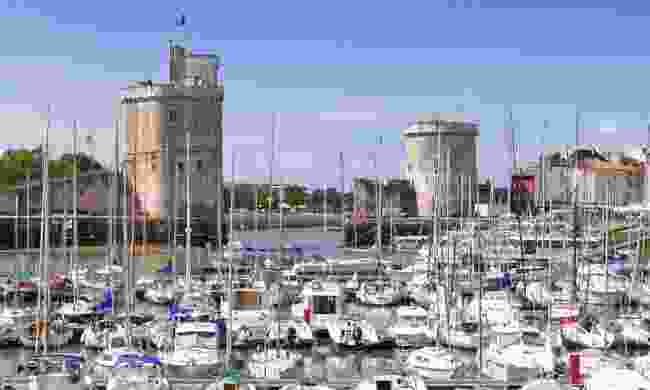 Discover La Rochelle’s seafaring past in the Musée Maritime de la Rochelle, which reveals the port’s history in fascinating detail. The displays in the main museum aren’t in English, so you may need a bit of French to get by. But any translation woes are easily compensated for by a tour of the museum’s retired meteorological frigate, which is docked next door.

For a blast of urban nature, head to Parc Charruyer on the western side of the Vieux Port. This 2km-long strip of parkland covers 3.5 sq km and is a tranquil place for strolls along shaded paths. Stop for a cool drink at La Trinquette, the garden of which lies in a rather dreamy spot overlooking a stream. At the foot of the park is Plage de la Concurrence, a small beach that has become a popular place for waterside walks.

Alternatively, grab a bike and cycle 12km north to the Baie de l’Aiguillon nature reserve. The bay is known for its mussel farming, but its mudflats and marshes also serve as a pit stop for migratory birds (up to 150,000 have been counted here in January). Finish with a hike up to the towering limestone cliffs of Pointe St Clément in Esnandes, which rewards with views stretching across to the coast. 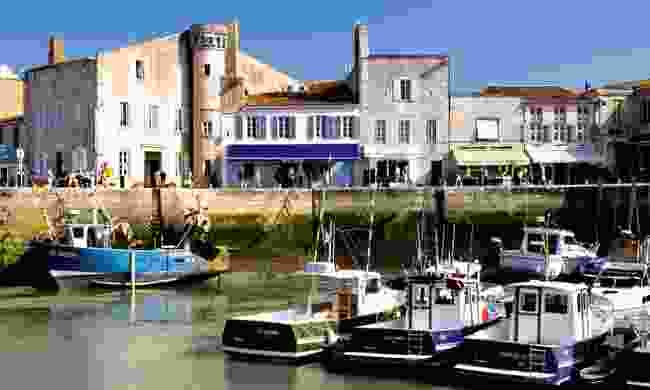 One of France’s most enchanting islands lies just over the bridge from La Rochelle. Île de Ré combines impossibly pretty villages of cobbled streets and whitewashed cottage with miles of unbroken sandy beaches. Thanks to an extensive network of cycle paths, getting around by bike is the best way to explore, and you’ll find bike rental shops all over the island.

Buses go from La Rochelle to the Île de Ré, or you can hire a bike and cycle across the bridge. If you’re driving, there’s a hefty toll to pay, but the serenity and beauty of the island are not to be missed. The largest of the island’s ten villages, St Martin de Ré is an enticing place with a fine indoor food market, as well as cafés and restaurants lining the port.

The island’s cycle lanes wind through peaceful vineyards and pine forests. Towards its western end, there’s a patchwork of salt pans and mussel and oyster beds, which all add to the larder of the island. Oyster shacks offer tastings, including l’Escale du Marais (6 45 620025) just outside La Couarde-sur-Mer.

Carry on to the westernmost tip to the Phare des Baleines (Lighthouse of Whales), an 1854 beacon with fantastic Atlantic views well worth climbing its 257 steps for.

Top tip: Leave your car behind. Driving in the city can be tough thanks to a maze of one-way streets and a large traffic-free zone. Parking isn’t easy either, though there are underground car parks near the Vieux Port and the main railway station. 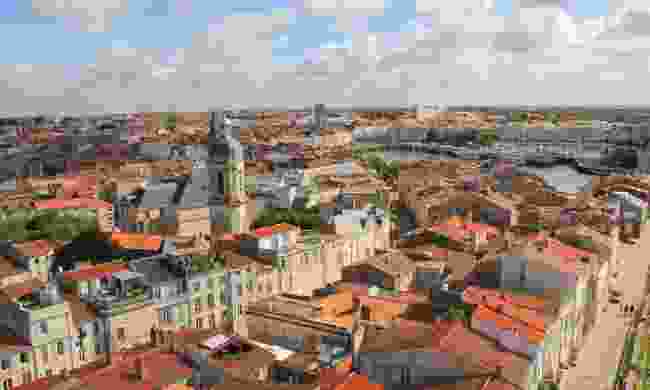 Aerial view of the Old Harbour of La Rochelle (Dreamstime)

When to go: Spring, summer and autumn are the best times to visit, although winters can be quite mild. High season is August, when it can get very busy. Airlines start to cut back on their flights from October onwards.

Getting around: The centre is compact and easily walkable, and there’s also a public bike hire scheme. There’s a sea bus that connects the Vieux Port with Les Minimes and a day pass includes buses and the sea bus.

Where to eat: Iséo offers Asian dishes as well as French cuisine. Prao serves up some innovative French dishes in its industrial-chic restaurant, while its café is a good choice if you’re after some sandwiches.