Ancient in origin yet young at heart, Greece’s second city is full of hidden secrets, exceptional food, thriving bars and a laid-back spirit

Some say Thessaloniki is a city of fairytales; that it’s an old lady with pockets full of sweets, which she hands out in her own time. It’s certainly old: Greece’s second city, and the capital of the northern Macedonia region, Thessaloniki was founded in 315 BC, named after the half-sister of Alexander the Great. And it is also a place of initially concealed pleasures. The appeal of a visit is not in Eiffel Tower-style headline sites but rather in the nooks and crannies – in those pockets.

Sloping down to the Thermaic Gulf, and located on the Via Egnatia (the Roman road linking the Adriatic to Istanbul), Thessaloniki has always been strategically important. After the split of the Roman Empire in the third and fourth century AD, it became the second city of Byzantium. It was sacked repeatedly over the following centuries, falling to the Ottomans in 1430. Perhaps most devastating, though, was the great fire of 1917, which destroyed hundreds of buildings. The result is a city centre largely reconstructed in the 1920s, with wide squares and boulevards, Byzantine flavours and the odd enduring nugget of ancient architecture. 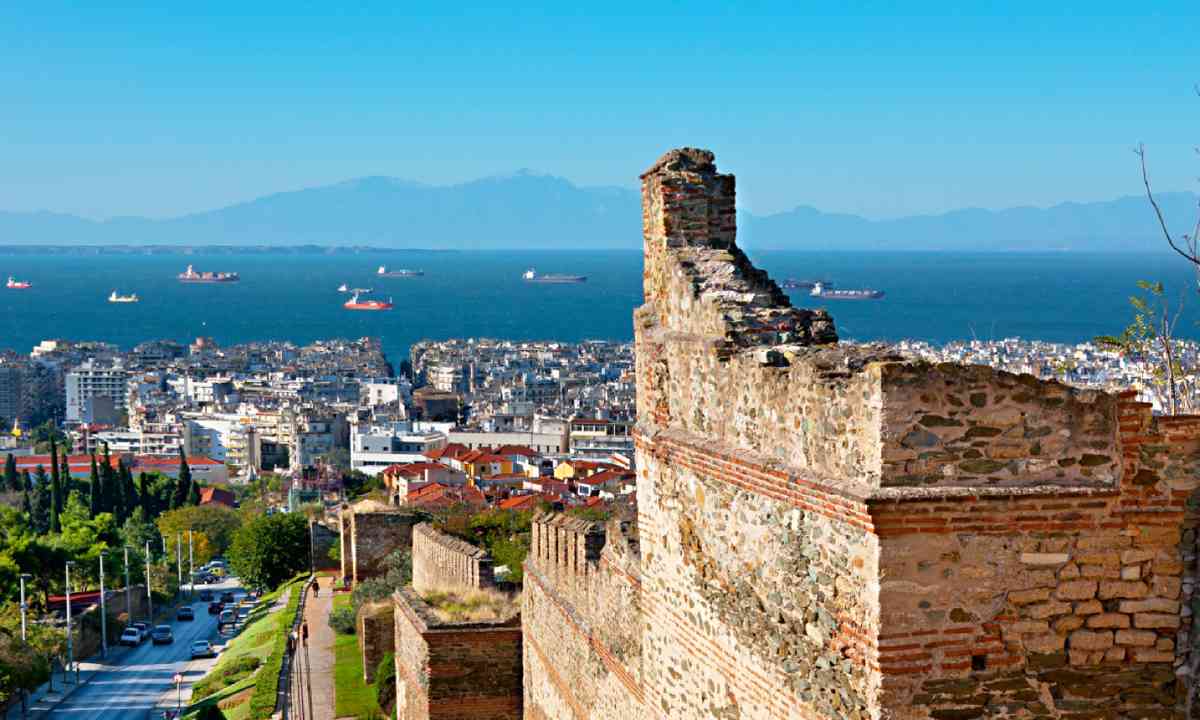 The high ramparts of of Thessaloniki (Shutterstock)

However, for all of Thessaloniki’s venerable history, it has a young heart. It held the tenure of European Youth Capital in 2014 – but it’s a city for youth year-round, every year: with two universities, it has the largest student population in Greece and one of the biggest in south-east Europe. This gives the city a tangible buzz, and a whole lot of eating and drinking options: allegedly, Thessaloniki has the most cafés and bars per capita on the continent. Chief among its pleasures are drinking very good coffee on a sunny terrace, looking across to Mount Olympus across the bay, or sipping a tsipouro (grape brandy) until the wee hours in a hip new bar.

So, yes, while it is a city that appreciates its history – a city where you can search out Roman triumphal arches, seventh-century mosaics and Byzantine walls – it continues to look forwards too. Its mayor, Yiannis Boutaris, who was voted in for a second term in 2014, is a tattooed, maverick, non-partisan, bike-riding recovering alcoholic who has ripped up the political rule book. He has reformed local government; he’s encouraging the multiculturalism that was so embraced in the past but which has been recently stifled; and he’s a big advocate of increasing tourism, envisaging a Barcelona-style reinvention of his port-side city.

And why not? Thessaloniki doesn’t have Gaudí, but it has a wide waterfront, a maze of wanderable streets, a passion for food (with many local specialities), fine beaches just a bus ride away and a laid-back spirit that locals call halará – no rush, no worries, take things as they come.

When to go: Thessaloniki can be visited year-round. Summers are hot and humid. Winters can be cold, chilled by the northerly Vardaris wind; however, this clears the skies for good views of Mount Olympus.

Getting around: Thessaloniki is fairly compact, though hilly away from the waterfront. To get into the city from Macedonia International Airport, take bus 78. Journey time is 30-40 minutes; one-way fares cost €2 (you need change to buy a ticket from the machine on board). Alternatively, a taxi will cost €20-30.

Where to stay: Well-located in the centre, The City Hotel is a contemporary, stylish option; doubles from €70 (£55). If you need to stay nearer the airport try the five-star Hyatt, which has a pool and a complimentary shuttle service to and from the city centre and the airport; doubles from around €150 (£119). 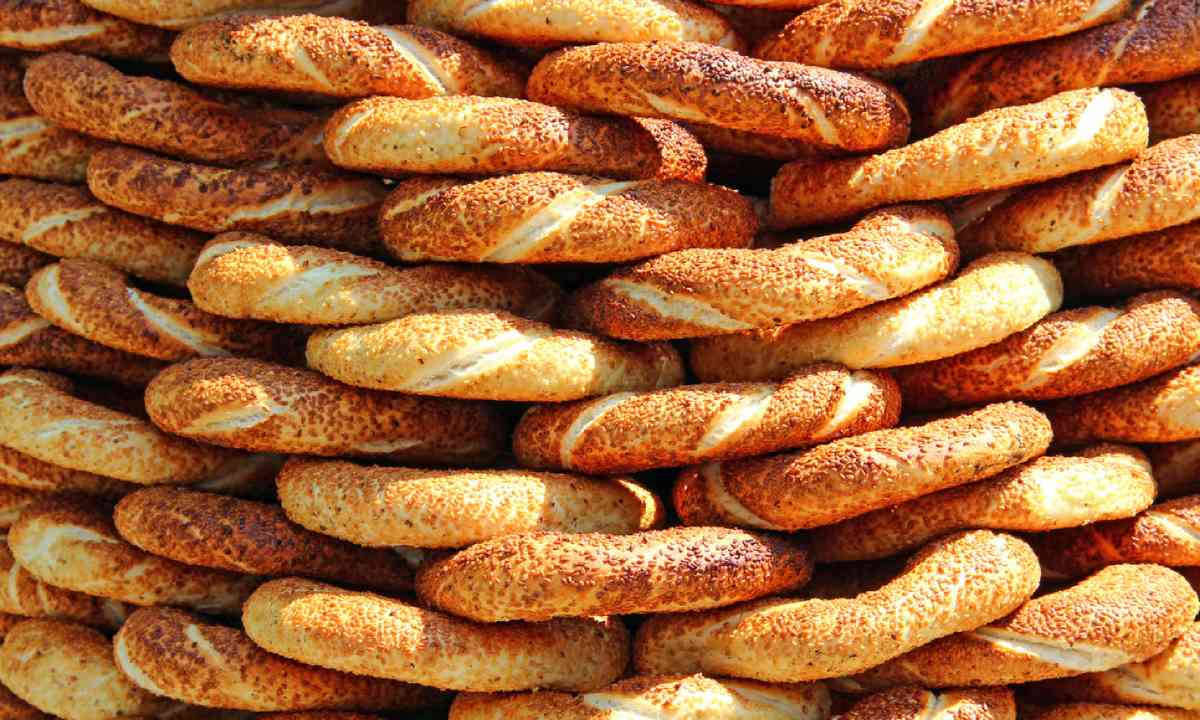 First, grab a koulouri – pretzel-like sesame dough rings, which originate from the city. They’re sold from street corner carts (60¢) and will fuel a food-and-history stroll.

Start at the eighth-century Agia Sofia, modelled on Istanbul’s great basilica; search out the quiet Church of St John at the south-east end and buy a pouraki (cigar-shaped choc waffle) from nearby Hatzifotiou. 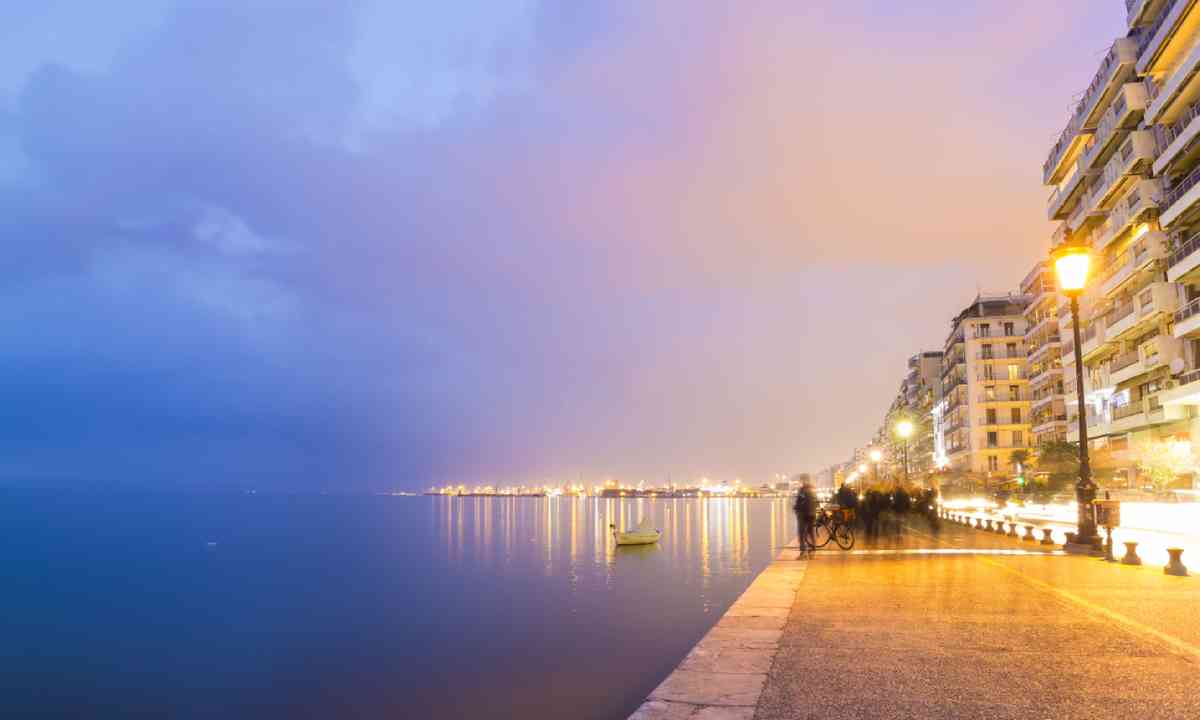 Head east to the third-century AD Rotonda (a former mausoleum with fine mosaics), then walk south to the Arch of Galerius (AD 300). Continue down pedestrianised Dimitriou Gounari to the Palace of Galerius on Navarinou Square, the ruins of which can be viewed from the balcony at cosy Loxias café (Isavron 5). Soon you’ll hit the waterfront and the city’s symbol: the Ottoman White Tower. Once a prison, it now houses a museum with good views from the top.

The regenerated waterfront reopened in late 2013; 5km of shore has been refurbed. Facing the water, turn left to stroll to the Concert Hall, via 12 new thematic parks. Or go right towards the port, pausing at Aristotelous Square – a drink atop the Electra Palace Hotel offers fine views. Finish at Kitchen Bar, set in a converted warehouse next to the State Museum of Contemporary Art on the spruced up port. Here, you’re well-placed for the Ladadika area, crammed with buzzy bars.

Start early, perusing the produce at Modhiano and Kapani markets – olives, fish, herbs, cheese. You might want to breakfast on bougatsa (filo pastry filled with semolina cream) at nearby Serraikon.

Head north-east to Dikastirion Square to visit Panagia Chalkeon, a comely Byzantine church surrounded by a flower garden. Further north, past the scrappy Roman Forum, is Agios Dimitrios, the church of Thessaloniki’s patron saint, and one of the largest churches in Greece; it has an interesting crypt museum, early Christian sculptures and eighth-century mosaics. 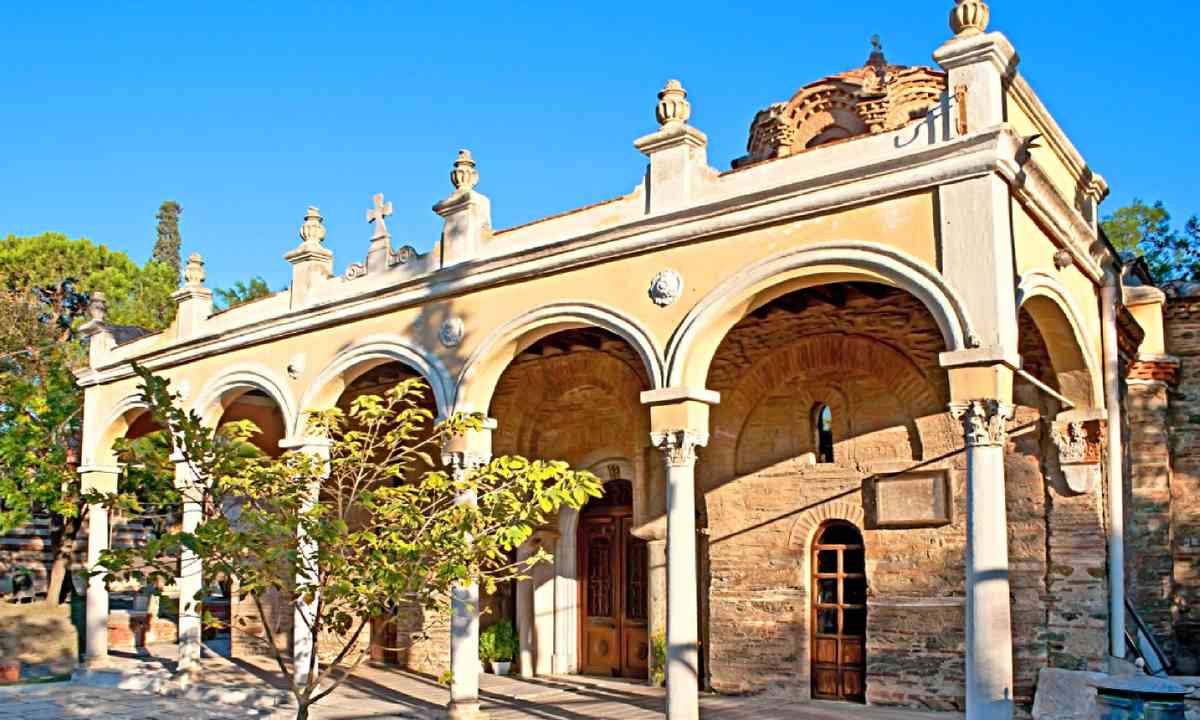 Now get ready to sweat: it’s uphill all the way to the city’s Ano Poli district, where Ottoman houses – spared during the 1917 fire – line narrow streets; en route, nip into the handsome Profitis Ilias church.

While in the Upper Town (also accessible via bus 23), visit Vlatadon Monastery (built on the spot where St Paul preached in AD 51) and the eerie Eptapyrgio, a Venetian fortress in the city walls that served as a prison until 1988. Parts of the walls still exist; they’re best around the Trigonion Tower. Head back downhill via Atatürk’s House – the father of Turkey was born here.

Options, options. If the weather’s fine, you might want to do as the locals do and decamp to the beach. Epanomi is clean and sandy and accessible via local bus lines 69 or 70 (33km; 1hr). Agia Triada (25km; bus 72; 40mins) is a Blue Flag beach, and a good spot for sunsets.

The Halkidiki Peninsula – a popular holiday spot, famed for its turquoise waters – is further east, but just about doable for a day trip; buses from Thessaloniki’s Halkidiki terminal take 1.5-2 hours to reach the nearer (and more developed) Kassandra area; Sithonia is prettier but slightly further away. 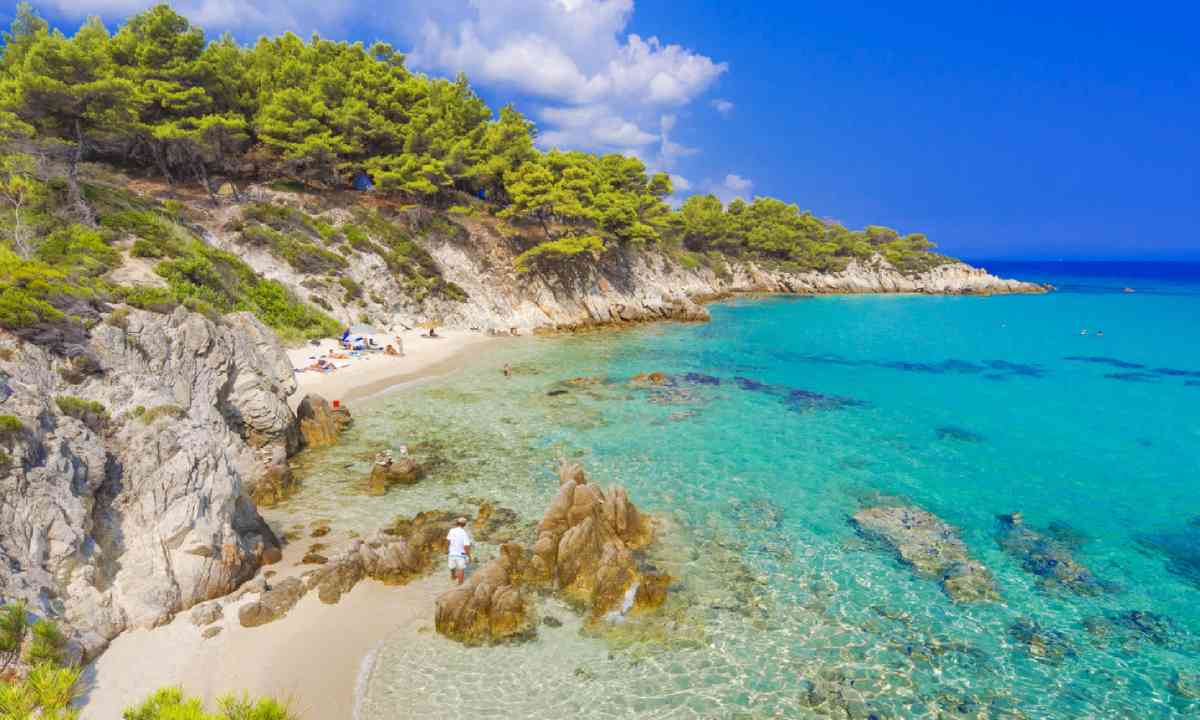 For a more cultural excursion, head west to Pella (regular buses leave from the main bus station; 40mins). Birthplace of Alexander the Great, Pella has a ruined agora (gathering place) and palace, exquisite mosaics and a modern museum that puts all the archaeology into context.

It’s possible to combine Pella with Vergina (change buses at Halkidona), home to the Royal Tombs, where some burial tumuli date back to the 11th century BC. New discoveries are made all the time: in October 2014, researchers identified the bones of King Philip II, father of Alexander the Great.