It might be famed for its Christmas markets, but the Tirolean capital actually makes a perfect weekend break destination all year round...

Jump on a flight to Innsbruck late in the year and you’ll find yourself amid the gluhwein, gingerbread and fairylights of not one, but four Christmas markets. Skiers and snowboarders bustle through the streets headed for the slopes, and the nearby mountains glisten white with snow.

Come outside the winter months and you find a very different city. I say city, but the word doesn’t quite seem to fit. Here, giant limestone peaks rise well above any manmade structures, seemingly endless alpine meadows surround downtown on all sides, and an impressive selection of rainbow-coloured, elaborately decorated baroque houses pepper the streets.

Innsbruck mixes historic and futuristic architecture – much of latter having been designed by the award-winning Iraqi-British architect Zaha Hadid. It’s a place made for walking and gawping up at the facades – especially in the warmer temperatures of summer and autumn, when you can do so free from the crowds of Christmas shoppers.

It’s practically obligatory to visit the main square, with its glistening Goldenes Dachl (Golden Roof), built in 1500 so Holy Roman Emperor Maximilian I could watch events unfolding below. Also worth exploring is the imposing Cathedral of St James, and the many museums and shops that surround it.

When you’re all walked out in the city, find the spaceship-like shelter of the Hungerburg Funicular. It will whisk you from the city centre up to the Nordketten cable car; take that and from the last station, after only ten minutes of proper effort, you’ll be standing atop the summit of Hafelekarspitze. At 2,334m, it’s the best place to get an all-encompassing view of the area.

From there you may spot the Bergisel Ski Jump across the valley, along with the Olympic Stadium (Innsbruck hosted the Winter Olympics in 1964 and 1976, and the first Winter Youth Olympics in 2012), proving that winter sports really are never far from Innsbruckers’ thoughts. The jump is another futuristic Hadid creation – but she’s not the only Brit associated with the place.

Back in the early 1800s it’s said an Englishman called Richard Tooth Townsen got wind of the Tiroleans leading a revolt against Napoleon and the Kingdom of Bavaria. In 1809, on that same Bergisel hill, the Tiroleans were overrun. But rumours of these brave people in the centre of Europe circulated and, after the fighting ended, Townsen was keen to seek them out. On reaching Innsbruck he fell in love with the place and spread the word. Thanks to him, Innsbruck’s tourist trade was born. Some 200 years later, the city still hasn’t lost any of its charm.

When to go: Innsbruck can be enjoyed year-round. In winter it’s the perfect snowy jaunt, with ample opportunities to ski and Christmas markets galore. In summer (mid-June to September) the temperatures are at their peak – low to mid 20°Cs – making it ideal for walking (though rainfall is at its highest too). Spring sees the lower mountain flanks burst with blooming flowers; autumn is cooler but less crowded. Always travel prepared for all seasons, no matter when you visit – in the mountains anything can happen!

Getting around: Innsbruck is a compact city with an efficient and reasonably priced public transport system that includes trams, buses and cable cars. If you plan to use this network, it’s cheaper to buy the Innsbruck Card (from €33; includes admission into museums/sights, a return trip on the cable car, travel on public transport and more). Getting into the city centre from the airport is easy: catch the F route bus from outside the arrivals hall (€2 one way/free with Innsbruck Card; journey time approx 20mins).

Where to stay: Perfectly placed in the city centre, and recommended for its sumptuous old-world-meets-new-world bedrooms, is the Grand Hotel Europa. Doubles from €126 (£100) including breakfast.

Where to eat: In Innsbruck you are spoilt for choice – there is everything from street cafes to Tirolean taverns and gourmet fare. To sample some traditional gröstl (potatoes, onion and bacon with a fried egg), dumplings, schnitzel or strudel head to Gasthaus Goldenes Dachl (Hofgasse 1). 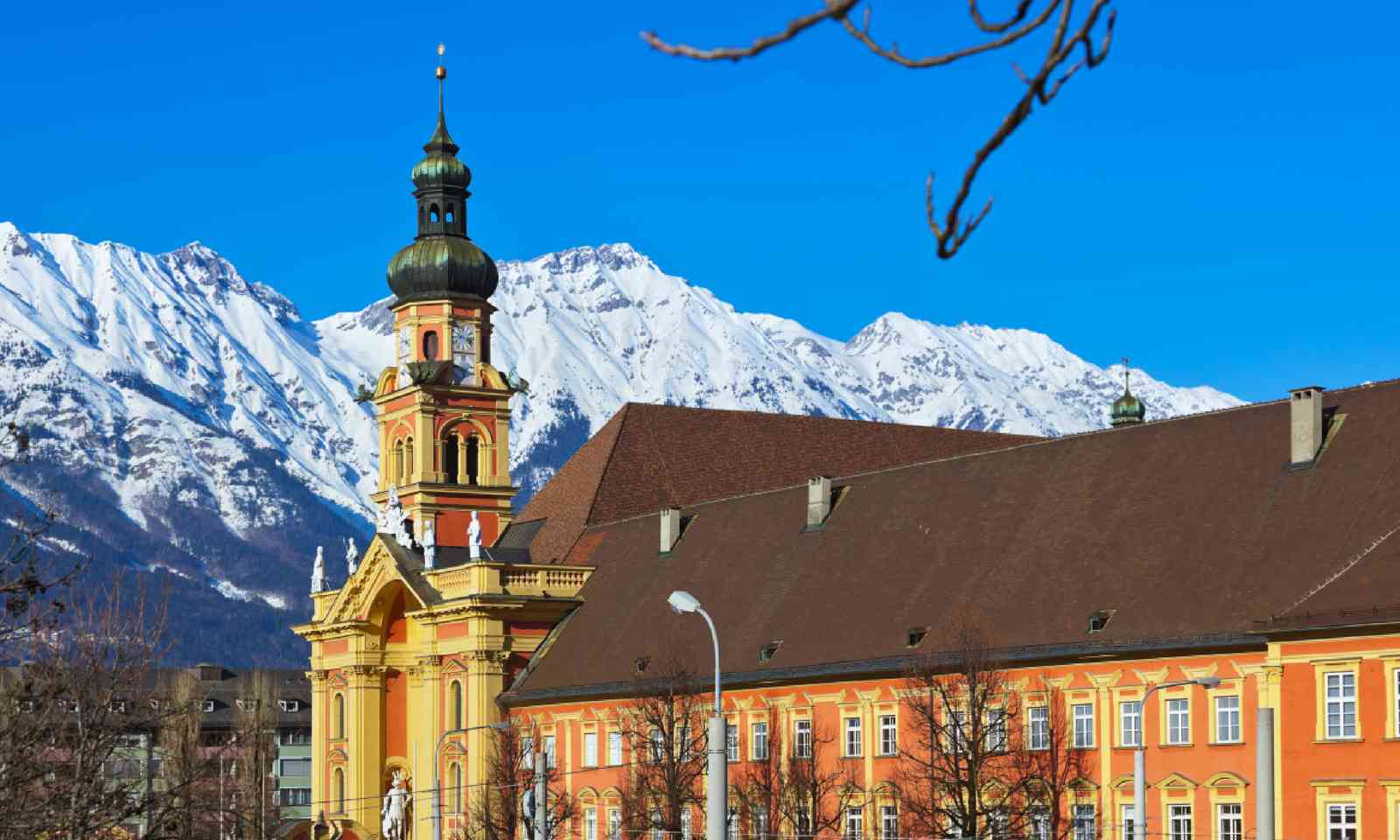 Head down to the Inn River, which gives Innsbruck its name (it means ‘bridge crossing the River Inn’), to admire the colourful houses.

Next head into the pedestrianised Altstadt (Old Town). Stop in the main square at the end of Herzog- Friedrich-Strasse to gaze up at the sparkling gold roof (actually gold plated) of the Goldenes Dachl, which glitters amid the 15th and 16th century buildings. Note the relief below the roof depicting Emperor Maximilian I, who commissioned it.

It’s a short walk to the cathedral, Dom St Jakob, with its sumptuous interior decor. Look closely at the ceilings – the apparent ‘domes’ are actually cleverly painted flat surfaces. Next, head to the Imperial Palace where an audio guide will talk you through the city’s history. For lunch try Café Sacher; the hot chocolate is legendary.

Spend your afternoon at the Hofkirche, which features the empty but ornate sarcophagus of Maximilian, and the Volkskunst Museum, with its selection of folk art. Then visit Grassmayr Glockenmuseum (Leopoldstrasse 53), the Bell Foundry, which has been in the same family for 14 generations.

Finally, indulge in a little retail action on Maria-Theresien Strasse before tucking into some hearty dishes at Gasthaus Goldenes Dachl.

Today, discover the legacy left by two Winter Olympic Games and peer a little further into Innsbruck’s past.

Begin with brunch at the Panorama Cafe on the Bergisel Ski Jump. The food is a little pricey but it’s good, and the views are unrivalled. Before you leave, take the lift to stand at the top of the ski jump, notice the cemetery that the participants bomb down towards and ask yourself: ‘how on earth do they do it?’. 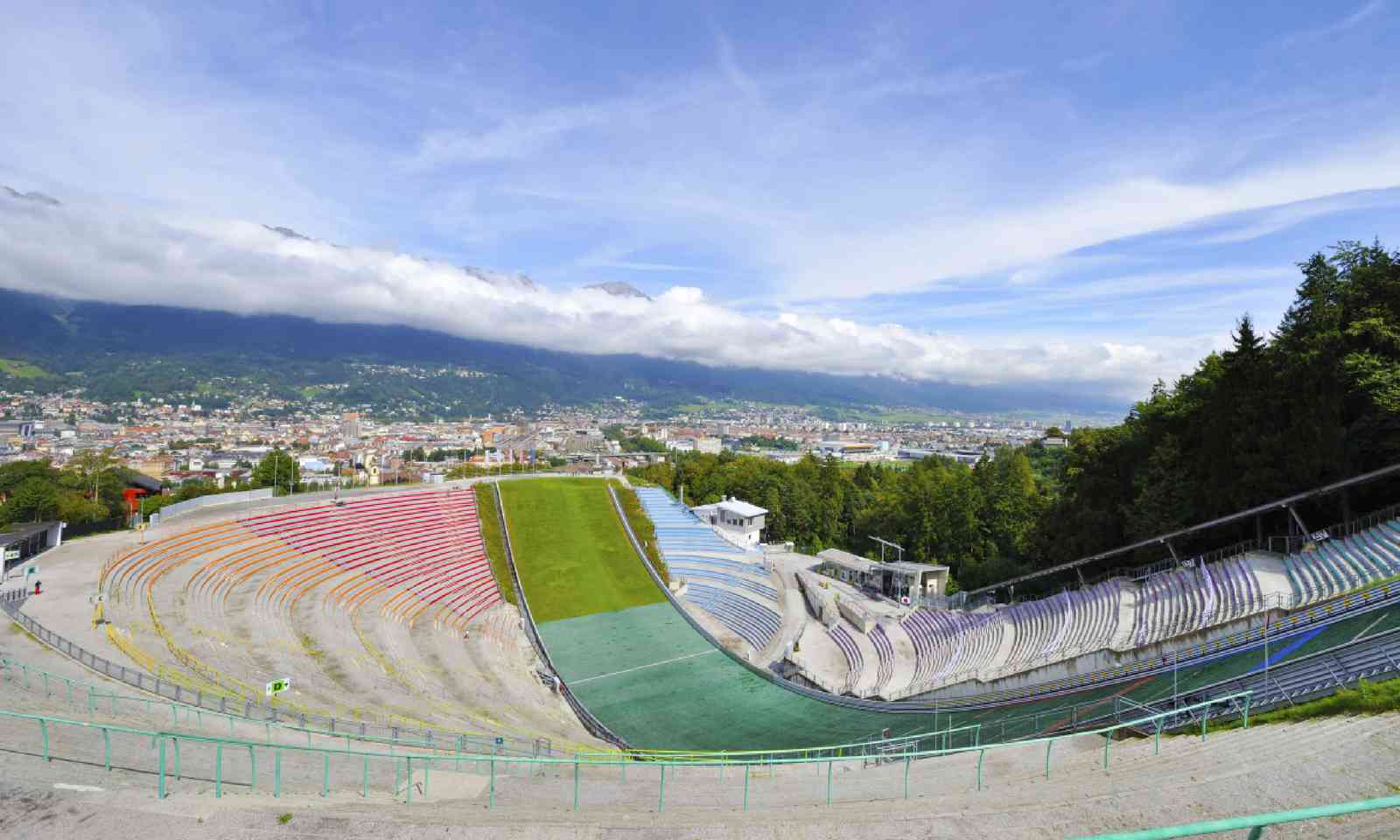 Keeping your feet firmly on solid ground, head next for Das Tirol Panorama and the Kaiserjägermuseum (Imperial Infantry Museum). Take a look at the city vista first: inside the Panorama is a 360° painting of the battle that took place on this very hill back on 13 August 1809.

From here you can catch the bus/train to the medieval Ambras Castle. Built in the 16th century, it houses an art collection and an armoury. There’s a café here too.

End the day (if you dare) with a visit to the Olympic Bobsleigh and Luge Track where, for a mere €30, you can experience the thrill of travelling at 90km/h down a 1,270m long track.

Use your last day to get up high. Ride the Hungerburg Funicular up to the last station, then catch the cable car up to Seegrube, then another to Hafelekar. From this point the walking possibilities are many. The easiest is to take a stroll to the summit of Hafelekarspitze, checking out the old Geierwally hut en route. The more energetic could try the walk to Pfeis alpine hut on the Goethe Path (4.5hrs round trip) – check the last cable car times before you start.

From Hafelekar summit, consider walking down to Seegrube. Here you can grab some lunch at the restaurant; on Fridays it also offers an evening meal/cable car deal (€53), and on Sundays it serves a jazz brunch (11am-1pm, €29.50) – book in advance. After you’ve eaten, walk the circular Panoramic Trail (25mins) for more views.

On your way back down, stop at the small Cable Car Museum in Hungerburg to learn about the cableways you’ve enjoyed. End the day in Innsbruck with drinks at Bar 360 for nightime views of the city and mountains, and to toast a perfect short break.