Whether palace-hopping, crypt-gazing or tasting the city at June’s Food Festival, there’s more to the Slovakian capital than its much-visited historic centre, says Sarah Reid

While neighbouring Vienna and Prague arguably boast more of an initial wow-factor, Bratislava wins hands-down for intrigue. Yet it can also do ‘pretty’, too. The Slovakian capital is dominated by a white ‘fairytale’ castle, which gazes over to its historic centre (known as Old Town). Here lie cobblestone alleys to wander, sun-drenched squares in which to sip pivo (beer), and cute cafés boasting tempting tortes. Such is their appeal that many visitors don’t venture any further. But that would be a mistake.

History lures you to every corner of the capital. Over the years, Bratislava has served as a strategic base for everyone from the Celts to the Romans. But it truly flourished under the 18th-century reign of Queen Maria Theresa of the Habsburg dynasty, back when the city (then known as Pressburg) was the capital of Royal Hungary. Her patronage brought a golden age, when Bratislava transformed from a Gothic fortress into a Baroque confection beloved by socialites and celebrities – a six-year-old Mozart even performed in the Palffy Palace (now a gallery).

Given the turbulent two centuries that followed, it’s a miracle that so many architectural examples of Bratislava’s heyday survived. From the ornate Slovak National Theatre to the impossibly grand Grassalkovich Palace (dubbed Slovakia’s ‘White House’), wandering the city reveals glimpses of an illustrious past, when it was the toast of Europe. 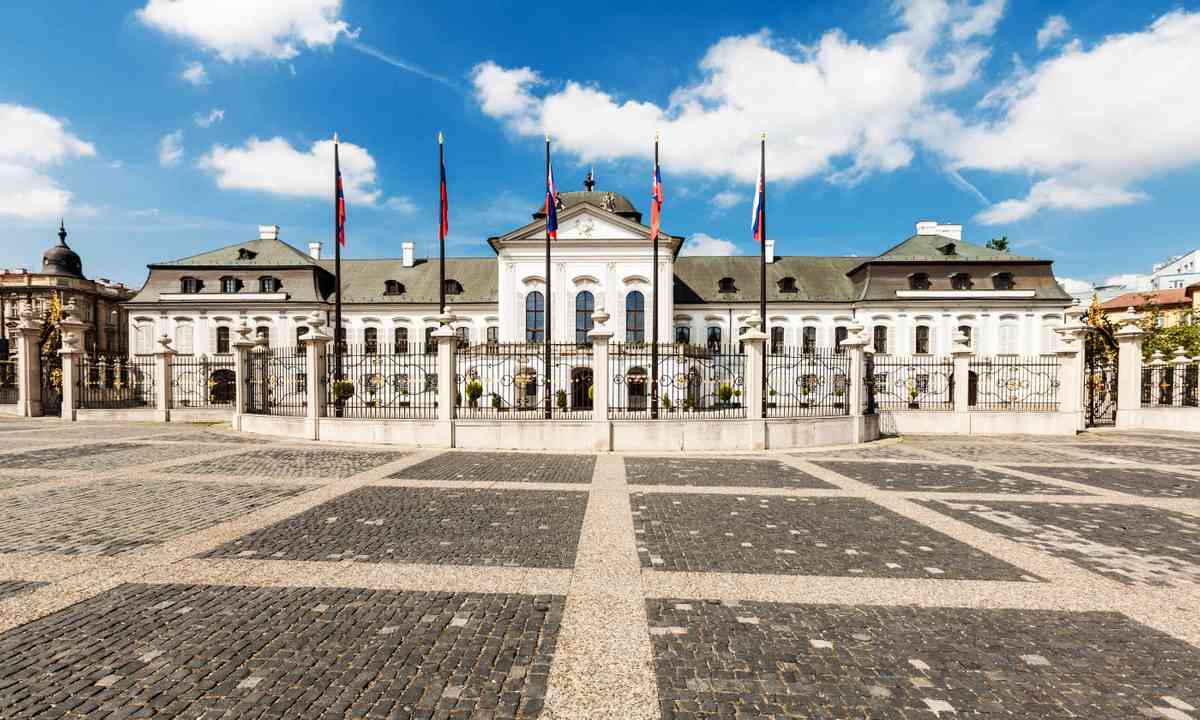 But as the might of the Habsburgs faded, so too dimmed Bratislava’s light. In 1918, it joined the newly formed Czechoslovakia, only to be annexed by Nazi Germany 20 years later. Under occupation it became a popular target for Allied bombs during the Second World War. Yet its dark days weren’t over. Liberation in 1945 brought with it Soviet rule, but while its reputation as a cultural beacon was diminished, the architectural legacy of communism still defines the city’s unique appeal today.

Bratislava’s Jewish quarter suffered perhaps the worst during the ensuing years, being almost completely razed during the early ’70s to build the Most SNP (UFO) Bridge. Today, this is one of the city’s iconic sights – a bridge topped by a cupola that appears to hover over the Danube like a flying saucer. Brutalist architecture fans could spend days seeking out the bevy of similarly dramatic buildings that still litter the city’s urban sprawl, but the most famous (Slovak Radio Tower, Freedom Square) are an easy walk from the centre.

The last few years have also seen a proliferation of hip cafés and bars spring up just beyond the largely tourist-oriented Old Town, many charging a fraction of the prices advertised within the historic centre. And with plenty of ruined castles, wineries and historic villages just a short hop from the city – not to mention Vienna, only an hour-and-a-half upriver – there’s no lack of day-trip options. Maybe Bratislava has that wow-factor after all… 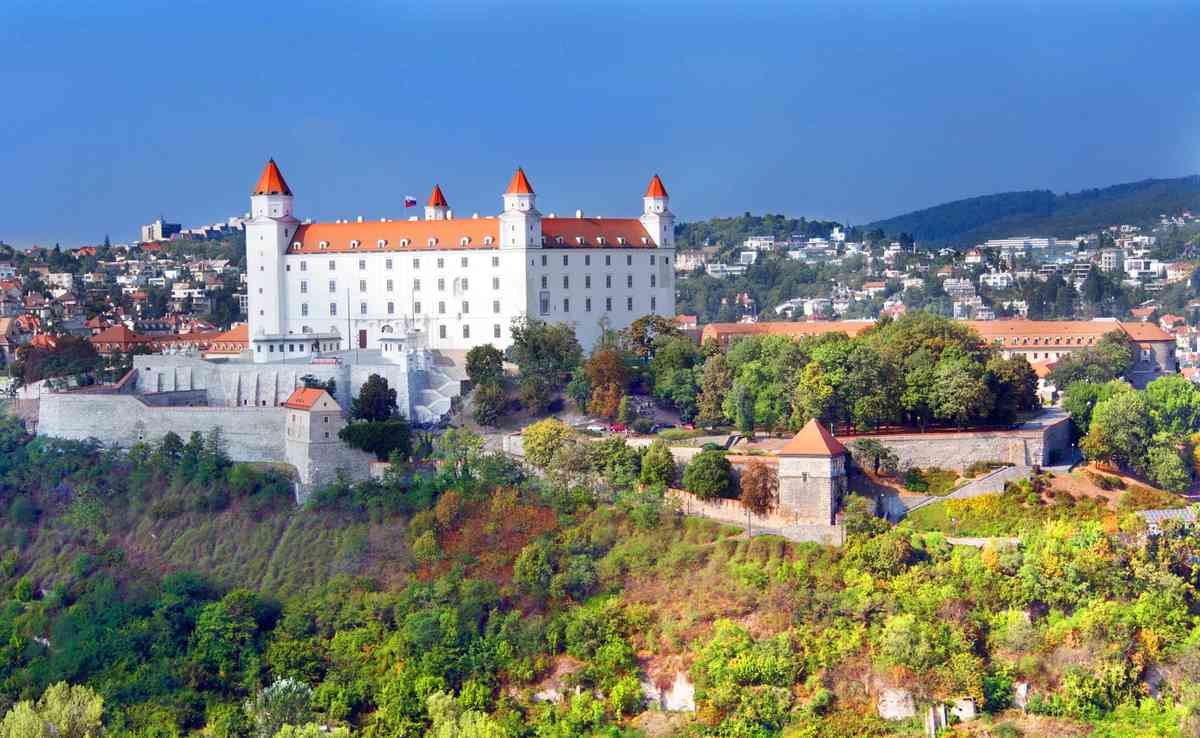 When to go: Year-round. Summer is best for cultural festivals, though river-cruise crowds also peak during these months. From late November, the main square hosts one of Europe’s more traditional Christmas markets.

Getting there: Ryanair flies from five UK airports to Bratislava from £40 return; flight time from London Stansted is around two hours.

Getting around: Old Town is both compact and walkable. Bratislava’s tram, train, bus and trolley network can take you further afield, with cross-transport day tickets from €3.50 (£3).

Where to stay: Marrol’s Boutique Hotel offers a plush, Art Deco-inspired base in Old Town; doubles from €119 (£102). For something different, Dunajský Pivovar is a smart ‘boatel’ docked in the Danube that has a private brewery located inside; doubles from €84 (£78).

Where to eat: Head out of the centre to find cheaper, less touristy cafés, bars and restaurants. Several blocks north of Old Town, on Kozia Street, lies Soupa Bistro, which is perfect for a cheap-but hearty lunch. Modrá Hviezda, on Beblaveho Street, is another treat, albeit expensive by local standards. It serves quality Slovak dishes in a wonderfully cosy, candlelit space. 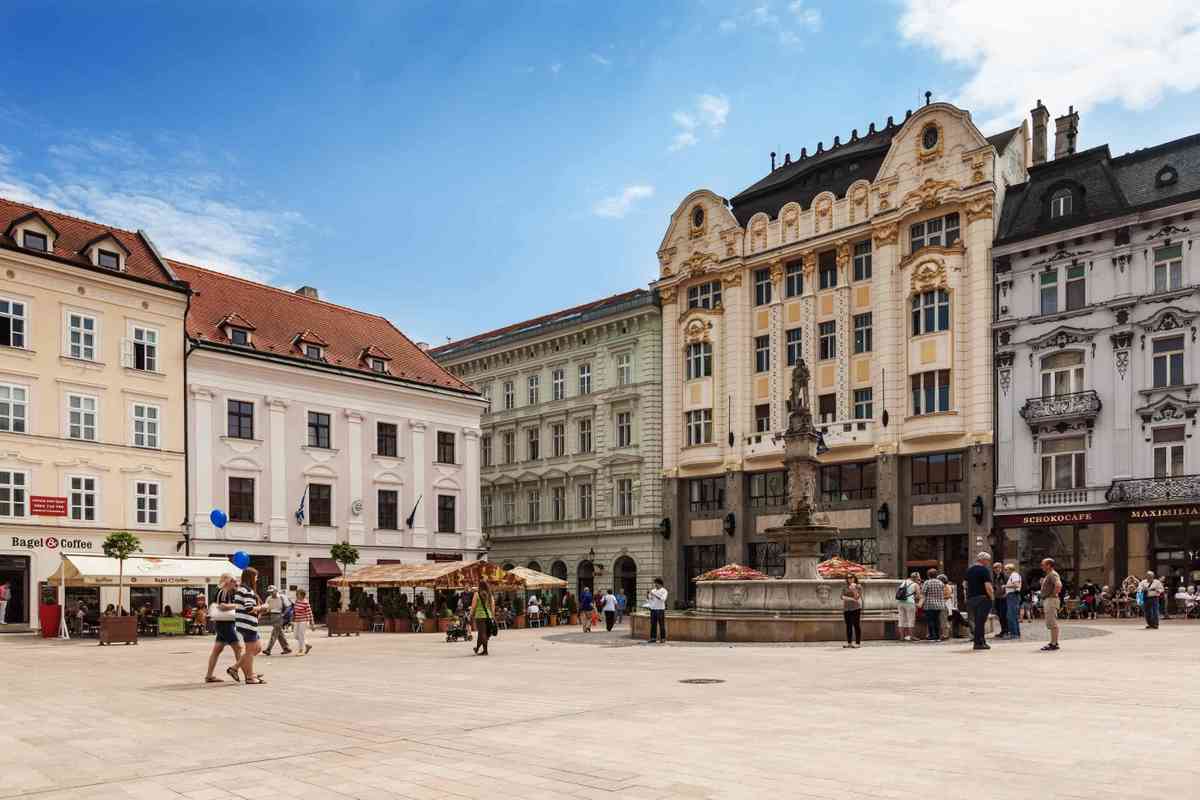 Get your bearings at Bratislava Castle. The ancient-looking castle actually dates from the 1960s, when it was rebuilt in a Renaissance style after lying in ruins following a fire in 1811. Today, it hosts collections from the Slovak National Museum, though climbing its lofty Crown Tower is just as satisfying.

From on high, look for the gold-plated ‘crown’ atop the 14th-century St Martin’s Cathedral, before heading into Old Town to get a closer look. The cathedral’s interior is oddly sparse, yet its crypts are bursting, and a section of Perspex flooring offers a glimpse into the catacombs.

East of the cathedral lies ‘The Watcher’, a series of quirky bronze statues that spy on passers-by. Skulk by to Hlavné Námestie, the city’s main square, which is framed by pastel-hued palaces (now mostly museums). Get a feel for 18th-century Bratislava in the restored Apponyi Palace.

At the northern end of nearby Michalská Street stands Michael’s Gate, the only city gate preserved from Bratislava’s now lost medieval fortifications. Finish by climbing its five storeys for fine views of the castle.

Day 2 – Behind the Iron Curtain 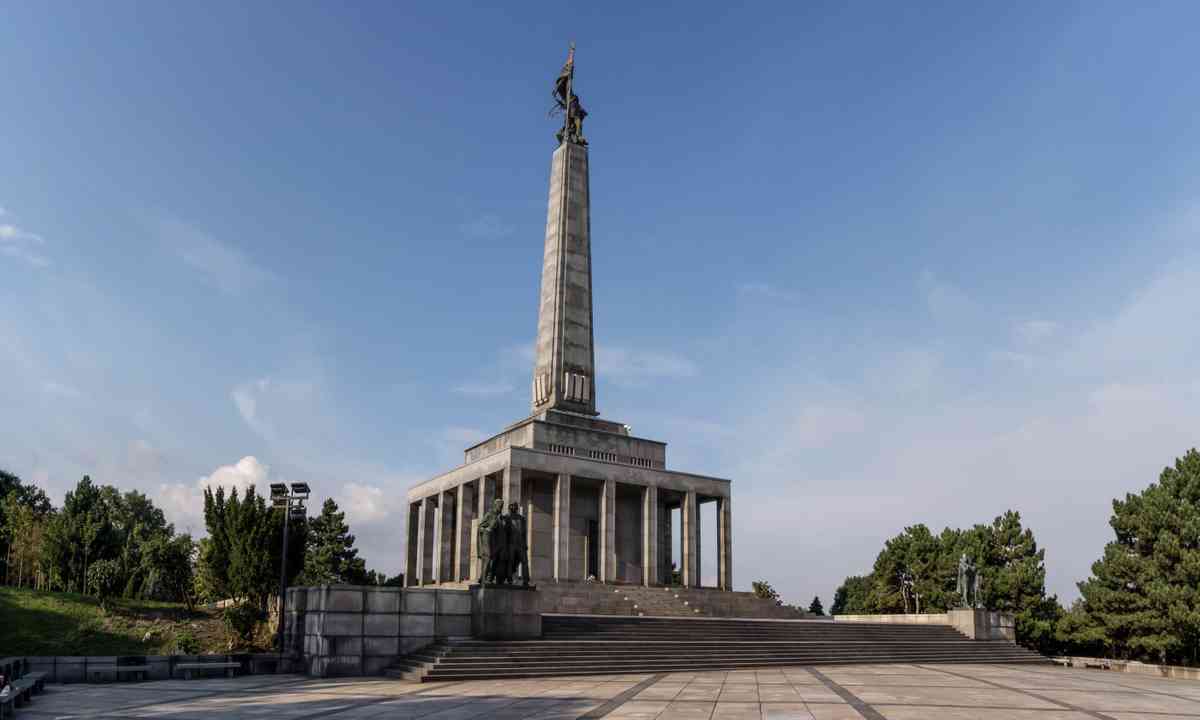 Delve into Bratislava’s more recent past with a tour of its communist-era architecture, which is unlike anything still standing in Europe. Start at the excellent Slovak National Gallery, across from the Danube. Its severe-looking modern wing was added in the 1970s and is the work of Vladimir Dedecek, the Slovak architect behind some of the city’s more controversial communistera relics, including the Supreme Court building that lies in Old Town.

Beyond Grassalkovich Palace, you can’t miss the inverted-pyramid shape of Slovak Radio Tower. This brutalist hulk looms over dilapidated Námestie Slobody (Freedom Square). Below it, the huge 12-tonne Fountain of Union has been out of order for a decade but is a sight to behold nevertheless.

After lunch (try Orbis Street Food), head out on a tour with Authentic Slovakia in a vintage 1970s Skoda car. Take in the Slavín War Memorial, the former Iron Curtain border zone and the vast concrete housing estate area that dominates Bratislava’s right bank – building blocks of the modern city.

End with a cocktail at the smart bar housed in the ‘UFO’ Bridge’s ‘spaceship’ – the viewing deck fee is waived if you stay for a meal.

Day 3 – Lunch at the neighbours 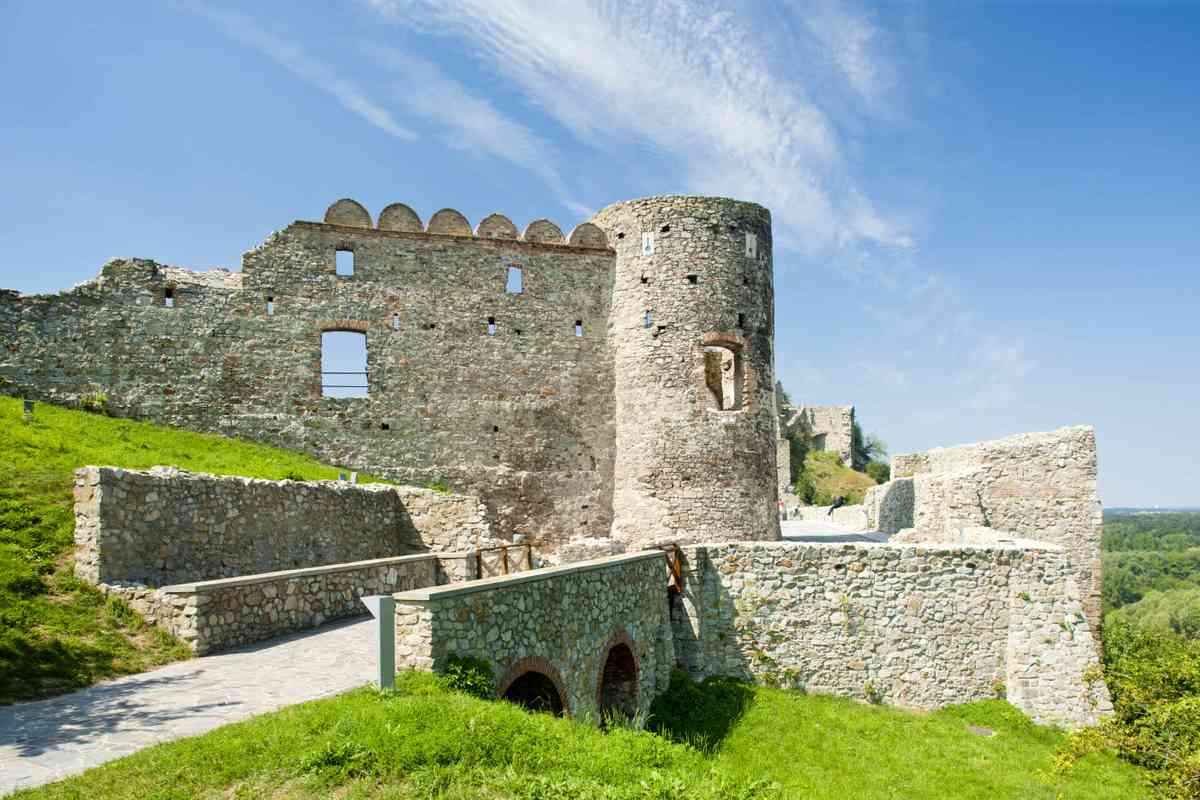 Vienna is so close that it makes sense to pop over for lunch on day three – just because you can. Simply jump on one of the fast ferry services that ply the Danube during summer, though try to avoid Sundays, when most shops close in the Austrian capital.

Around 10km upriver, on the Slovakia-Austria border, you’ll spot the crumbling 9th-century ramparts of Devin Castle. Take buses 28 or 29 (from under the ‘UFO’ Bridge) to explore it up close. The site features a fine archaeological exhibition, but the wide, sweeping countryside views from the castle’s medieval walls are the real highlight.

The pretty little village of Svätý Jur lies on the Small Carpathian Wine Route, just 14km north of the capital. It makes for an easy day trip and is easily reached by bus or train. Once there, head to the restaurant Vinocentrum, on Prostredná Street, to taste a range of Slovak wines.

Of course, if you’d rather stay cityside, try soaking up the local art scene at the edgy, modern Nedbalka Gallery in Old Town. Then let the local wines come to you at hip wine bar Viecha, which sources its vino from regional producers and has two locations, both just north-east of the centre.