The food capital of Italy makes a delicious destination for a long weekend – and offers medieval marvels, lively bars and fast cars too

They say that the people of Emilia-Romagna eat more, care more and talk more about food than anyone else in Italy – which is no mean feat. Many of the iconic ingredients of Italian cuisine are produced within 30km of its medieval capital Bologna, including prosciutto di Parma, Parmigiano-Reggiano and aceto balsamico tradizionale di Modena. It’s also the home of the country’s most famous sauce, ragù. In fact, food is so inextricably linked to Bologna that it’s been known as La Grassa (the fat) for centuries.

This flourishing city has earned other nicknames over the years. One of its monikers, La Rossa (the red), comes from its terracotta-hued buildings, as well as its revolutionary past and generally left-wing sensibilities. La Dotta (the learned one) celebrates the fact that Bologna is home to the Western world’s oldest university, founded in 1088; it still has a large student population, which gives it a livelier feel and a grittier edge than many medieval cities. 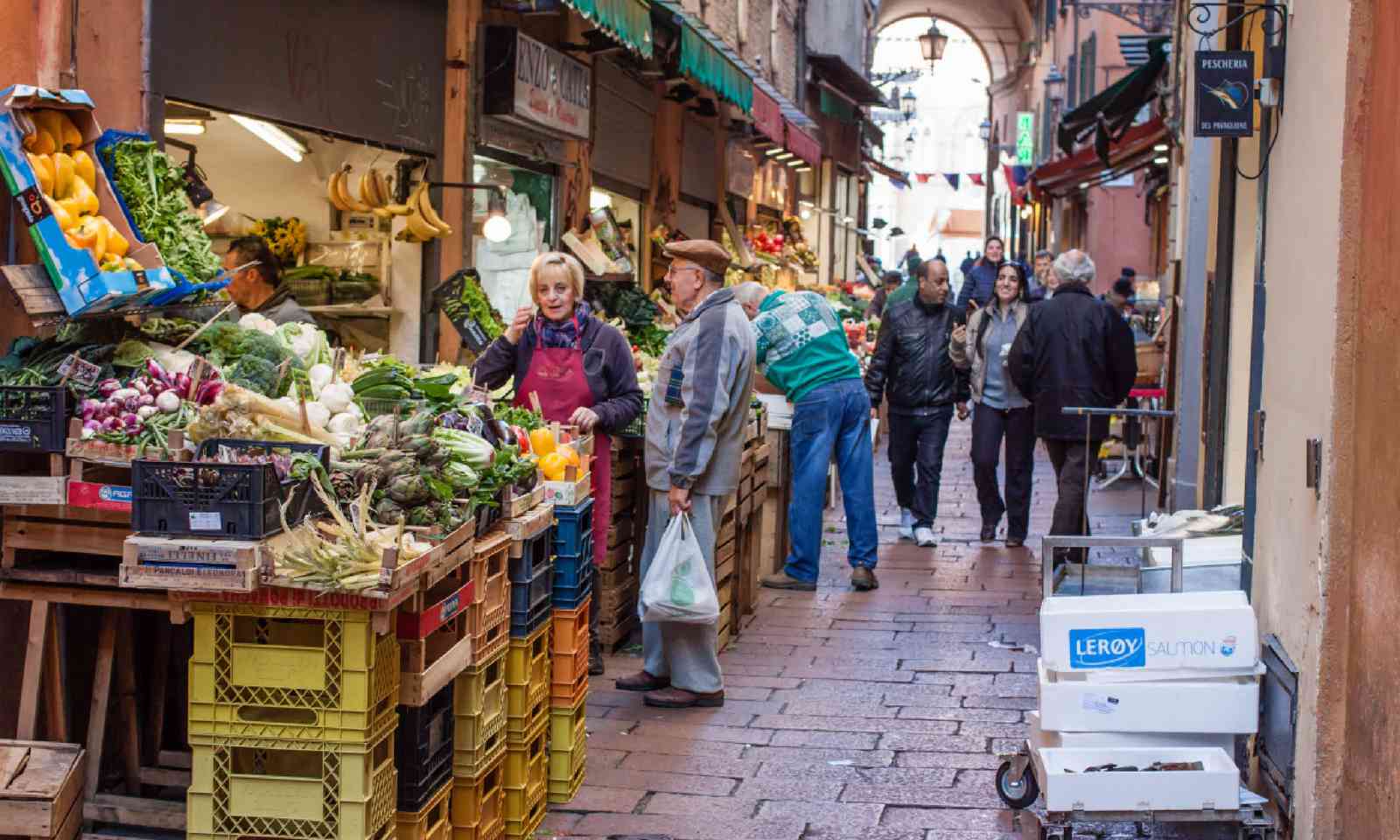 Grocery stores in the "Quadrilatero" in Bologna (Shutterstock)

Bologna is also one of Italy’s most beautiful cities but it’s often overlooked by tourists in their rush to get to Florence and Venice – and it’s all the better for that. Its compact historic centre was made for walking, filled to bursting with grand medieval and Renaissance architecture, historic monuments, quirky museums and 40km of portici, covered arcades that wind around the old quarter. But it’s certainly not stuck in the past and there are year-round music, theatre and art events to complement its lively café and bar scene.

The Quadrilatero’s cobblestone streets are a gastronomic delight, lined with salumerias (delicatessens) selling culatello (‘little backside’ is considered the most prized cut of pork) and mortadella (a local salami that is cooked rather than cured), and osterias serving freshly made pasta. The Mercato di Mezzo is an innovative combination of the traditional and the contemporary, with 14 stalls selling quality produce. It is also the first step towards the creation of a ‘City of Food’ theme park in Bologna, championed by Eataly’s founder Oscar Farinetti and due to open in November 2015.

Emilia-Romagna is a broad region – bordering Tuscany, Liguria and Lombardy, and stretching to Rimini on the Adriatic coast – and Bologna makes the perfect base for exploring. The Via Emilia, originally built by the Romans in 187 BC, runs through Bologna – follow it to Ferrara, one of Italy’s loveliest walled cities; affluent Parma, famous for its ham; and elegant Modena, the birthplace of Pavarotti. And petrolheads will enjoy the Motor Valley – Ferrari, Maserati, Lamborghini and Pagani all have workshops in and around Bologna. 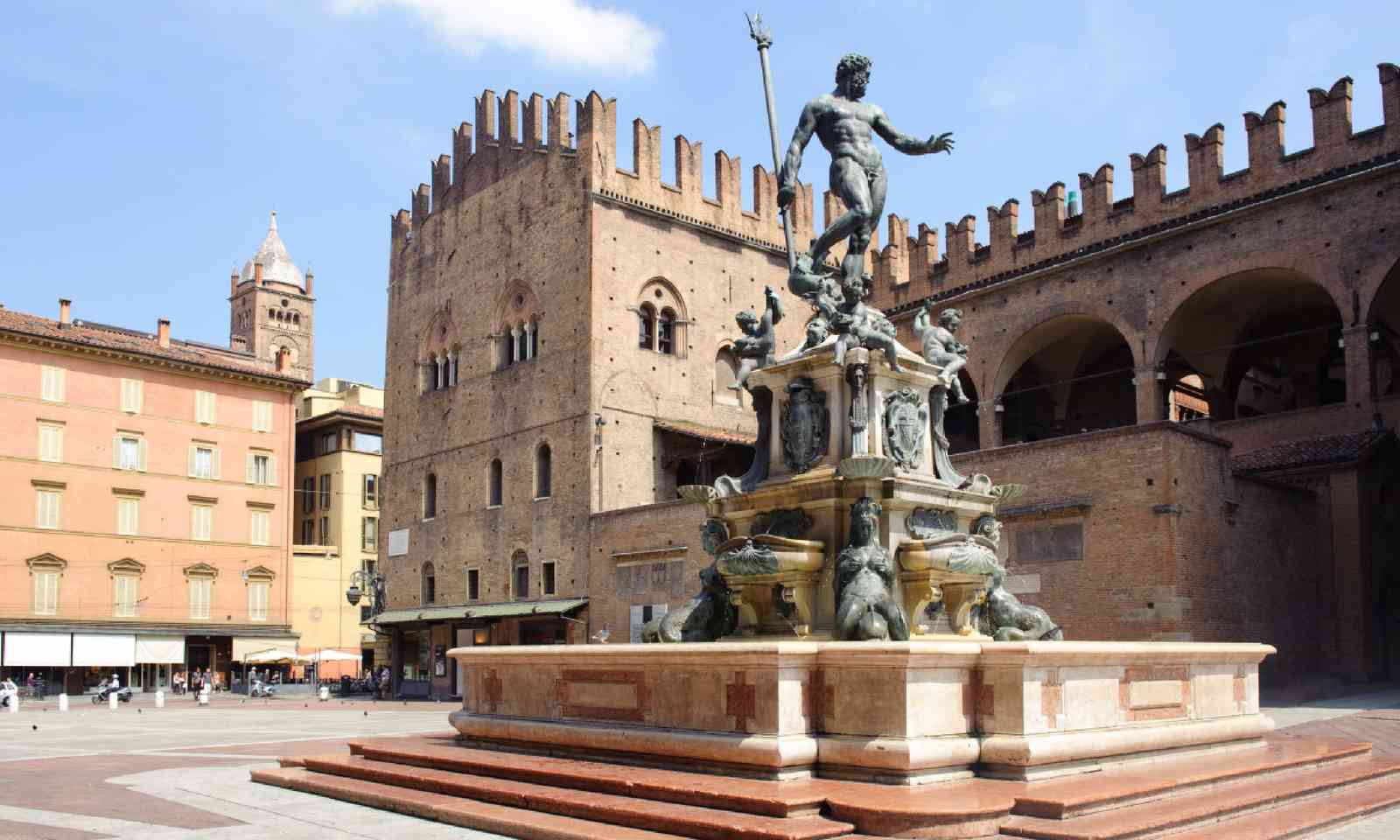 Fountain of Neptune in Bologna (Shutterstock)

When to go: Year-round. Spring and autumn are best for warm weather and fewer people.
Getting around: The city centre is compact and walkable. There’s a good bus network and plenty of bike hire places. The easiest way to explore the region is by train or tour.
Where to stay: Centrally located I Portici is housed in an historic building but the interior is ultra-modern and minimalist; doubles from €100 (£80). Hotel Il Guercino is 250m from the train station; doubles from €69 (£55), including breakfast and bicycle hire.
Where to eat: There’s an overwhelming choice. Splurge on traditional dishes with a contemporary twist at I Carracci (Via Indipendenza 8), the fine-dining restaurant of the opulent Grand Hotel Majestic Già Baglioni. Tamburini (Via Caprarie 1) in the Quadrilatero is a traditional deli and buffet-style café.

Start in the historic heart: Piazza del Nettuno, with its eponymous fountain, and neighbouring Piazza Maggiore, lined with imposing palazzos and dominated by the Basilica di San Petronio, dedicated to the patron saint of the city. Walk down Via Rizzoli to the Due Torri, the city’s emblematic Two Towers. You can climb the almost 500 steps of the Torre degli Asinelli (€3 [£2.40]) for a view over the red-tiled rooftops.

Head to the Piazza Santo Stefano for an espresso. Admire the Basilica Santuario Santo Stefano, a complex of seven churches (four remain) built atop an ancient temple to the goddess Isis. For authentic fast food, grab a piadina, a thin flatbread filled with an assortment of cheeses, cold cuts and vegetables, from Ca Pelletti (Via Altabella 15). Afterwards indulge in a gourmet gelato at Pretto Gelato (Via de Toschi 2).

Continue the foodie theme and dive into the Quadrilatero. This ancient grid of streets is lined with food stalls, delis and down-to-earth osterias that are hung with legs of ham and stacked with cheeses.

Make like a Bolognese and stop for aperitivi at Le Stanze (Via del Borgo di San Pietro 1), a former chapel daubed in 16th-century frescoes. Then dine like a local at Trattoria dal Biassanot (Via Piella 16/a), which has views over the Reno Canal. 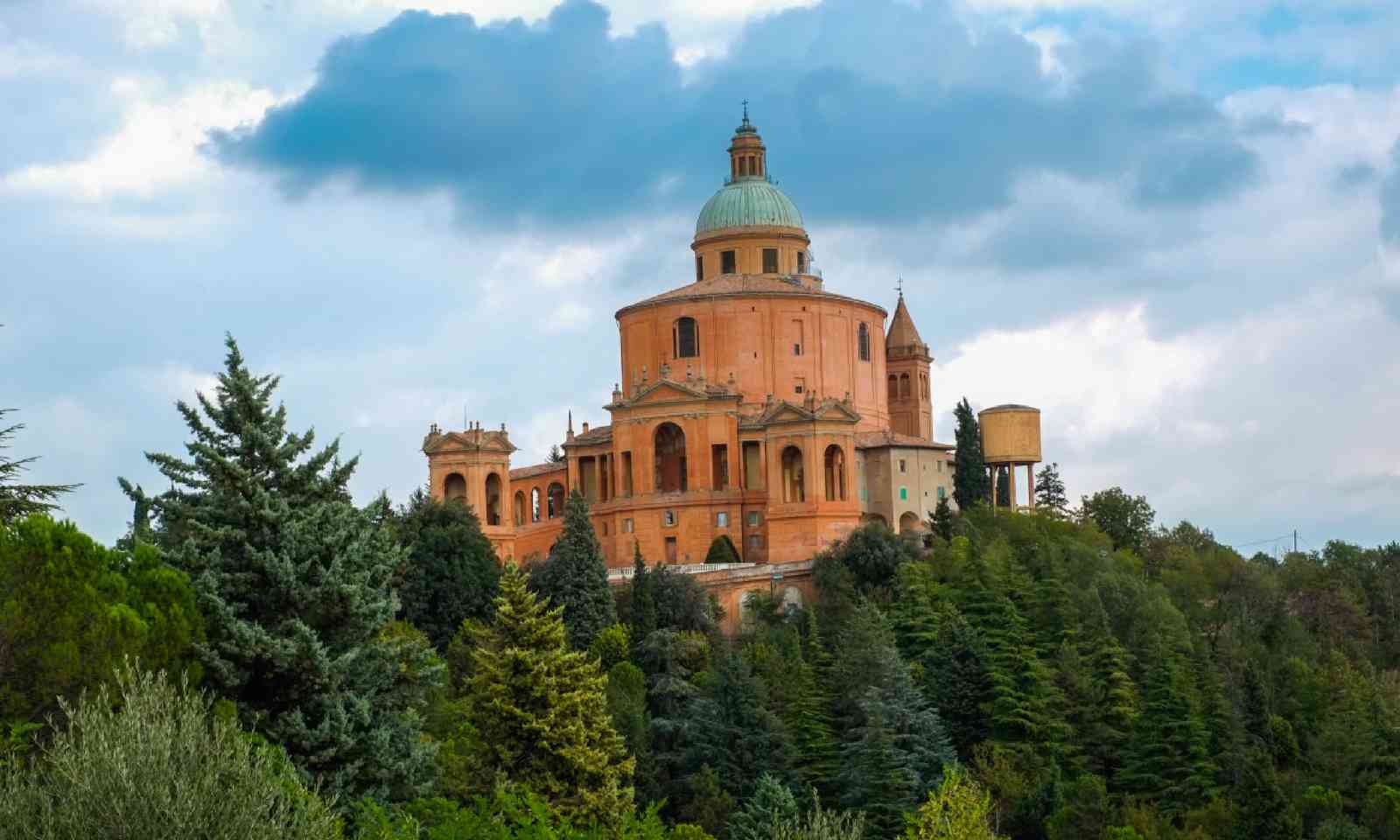 Take a half-day cooking class at Il Salotto di Penelope (Mon-Fri, 10am-1.30pm or 5pm-8.30pm; from €80 [£63]) where you can learn to make dishes such as tortelloni stuffed with ricotta and tagliatelle (never spaghetti) topped with ragù.

They say the secret to making great pasta is to stretch out the dough so you can ‘see San Luca through it’. And, indeed, the walk to the hilltop Basilica Santuario di San Luca is the perfect way to work off your lunch. Take bus 20 to the Meloncello Arch and wind up the hill for 2km under the world’s longest portico, held up by 666 arches. The 18th-century sanctuary is home to an image of the Madonna and Child thought to date back to the 12th century.

Alternatively, head to the world’s first museum devoted to ice cream, Gelato Museum Carpigiani (closed Sun-Mon; €5 [£4]; reservations required), a 25-min journey from Bologna Central Station on bus 87. The interactive guided tour charts the rise and rise of this sweet treat. You can even create your own artisan gelato after a short lesson in their laboratory or take a 3.5-hour masterclass (€45 [£36]). 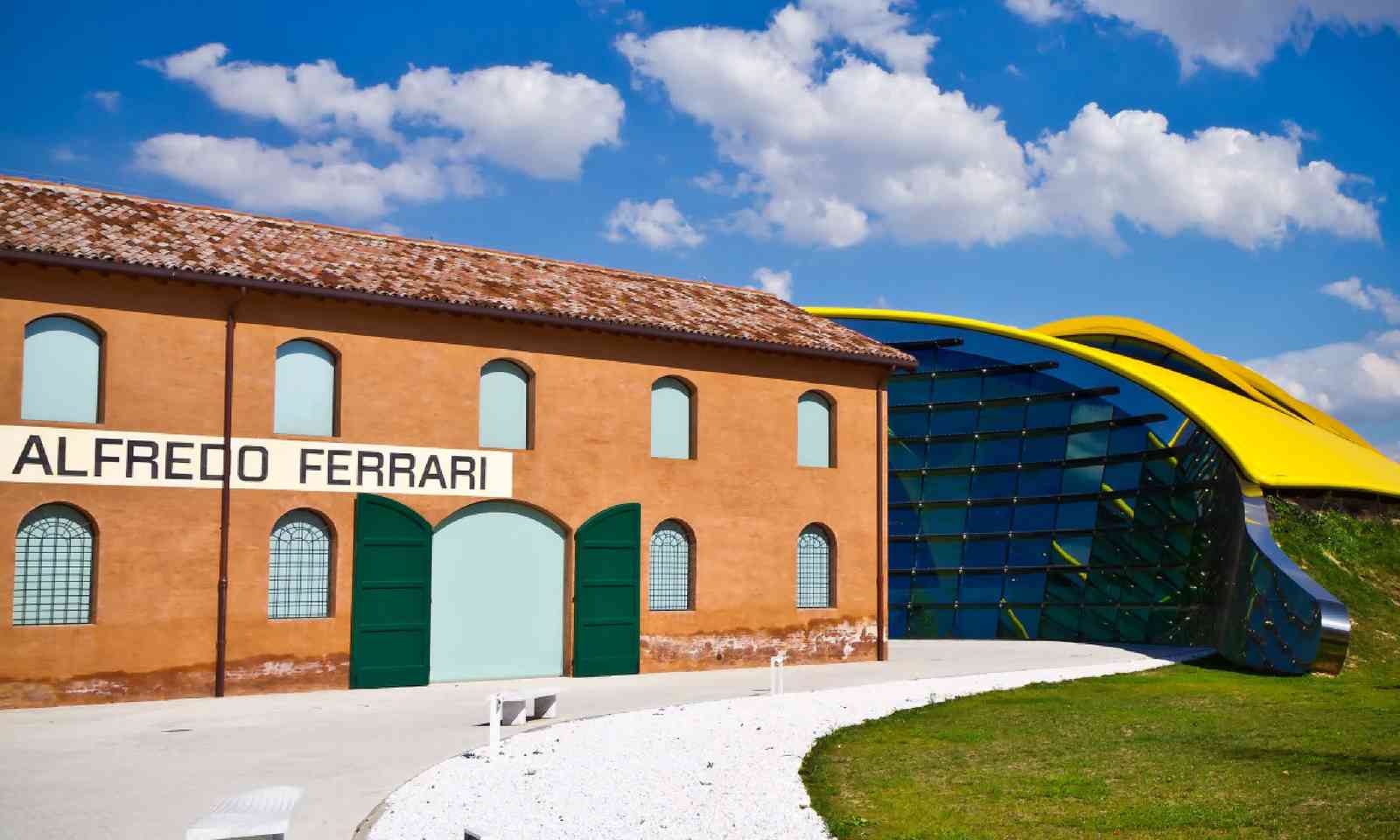 The fertile Emilia-Romagna region is Italy’s agricultural heartland, home to some of the country’s finest produce and its fastest cars. Take a train (25mins) to the medieval city of Modena, the birthplace of Enzo Ferrari. The Museo Enzo Ferrari (€15 [£12]) is built around his childhood home. It also runs a shuttle service to the vintage-car-filled Museo Ferrari in Maranello (€15; combined ticket €26 [£21]).

Via Emilia Tours (half-day tours from €99pp [£78]) will help you explore the Motor Valley, including taking your fantasy car out for a spin. It also arranges foodie tours, and cuisine/car combos. For instance, visit Hombre Organic Farm, owned by the famed Panini family, to see how they make giant wheels of parmesan, then admire rare Maseratis and more at the Collezione Umberto Panini Motor Museum. Finish with a stop at family-run Acetaia Boni, which has been producing artisan balsamic vinegar for generations. Learn about the fermentation process, before tasting the rich, syrupy liquid – delicious with parmesan and, unexpectedly, ice cream.