An easy hop from Lisbon, the beautiful main city of the crowd-free Alentejo region is an ideal place to soak up its centuries of history and slow right down...

The lad with the gelled hair and fashionable jacket was in his mid-teens, cool but in a rather self-conscious way. He pulled out his phone, extended his arm and grinned widely as he did a thumbs up to the camera. Just like any other tourist selfie really – except that in this case he had carefully positioned himself so that a pillar adorned with human skulls was just over his shoulder. If he had read the slightly chilling inscription at the entrance to the chapel – ‘We, the bones that are here, we await yours’ – then he was showing no sign of contemplation or reflection.

Capela dos Ossos, the Chapel of Bones, is perhaps the best known but most macabre sight in Évora, one of Portugal’s most beautiful towns, and chief city of the Alentejo region. Dating back more than five millennia, Évora has a rich history. Probably founded by the Celts, it flourished under the Romans and acquired its maze of alleyways under the Moors. In the 15th century the Kings of Portugal and the Court took up residence here and the city entered its golden age. Impressive churches and palaces were built, and it became an important centre of learning – though things did get rather bloody at times, with heretics being burned to death during the 16th century Inquisition. 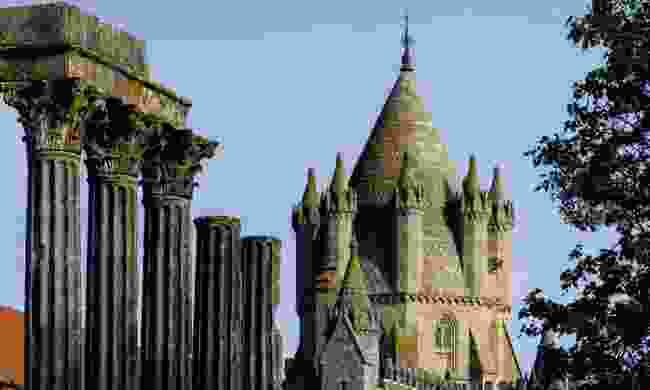 Today the historic centre of Évora is recognised as a UNESCO World Heritage site. Wander inside the old town’s walls and you’ll stumble across layer upon layer of history, from a Roman temple and baths, to a 16th-century aqueduct, from a former royal palace to Moorish arcades. But it’s much more than a charming well-preserved museum piece. Situated around 90 minutes by bus or train from Portuguese capital Lisbon, Évora is a vibrant university town, with plenty of inviting restaurants, cafés and bars to relax in once you’ve explored its winding streets and handsome squares.

Évora also serves as a base or jumping-off point for exploring southern Portugal’s wider Alentejo region, which covers a third of the country and stretches from the wild beaches of the Atlantic coast in the west to the Spanish border in the east. The breadbasket of Portugal, the Alentejo is also known for its world-class wine, its cork (it’s the largest producer in the world) and its black pork, derived from pigs that forage for acorns.

Neolithic sites pepper the area, showing the region’s importance many millennia ago, while spectacular hilltop villages gaze out over sun-drenched plains and gently undulating countryside. Even if you’re not a history lover, you will pick up the timeless rhythms of life here. The Alentejo is the perfect place to slow down, potter around and unwind. 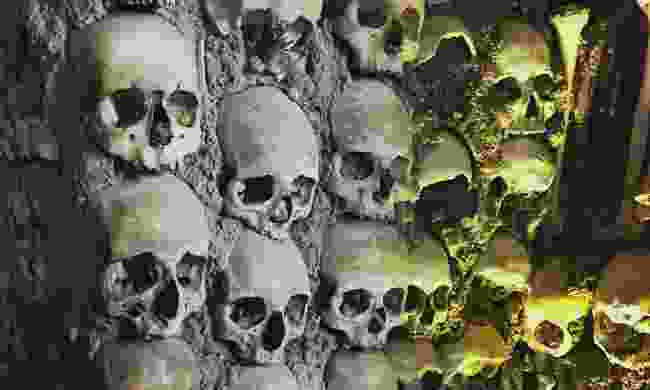 Day 1: Feel the city in your bones

The old town is invitingly walkable: nothing is more than a ten-minute stroll from the main square, Praça do Giraldo. The well-preserved Roman temple, used as an execution spot during the Inquisition, dates from around the first century AD. The Roman baths, near the town hall, are even older.

Evora’s huge rose-granite cathedral dates from the 12th century and contains an unusual statue of a pregnant Mary. There are great views from the roof while, next door, the impressive archbishop’s palace is now home to the Évora Museum.

In the small Capela dos Ossos (Chapel of Bones) more than 5,000 bones line the walls. It was built as a solution to growing space pressures during Évora’s 16th-century boom days, but also served to remind the living of life’s transient nature.

For something lighter, do a little shopping on Rua 5 de Outubro, where there are stores specialising in eco-friendly cork products.

Évora has a wide choice of restaurants. Wash down hearty specialities with a local wine such as one from the Cartuxa winery. Cromlech of the Almendres (Lyn Hughes)

Day 2: Seek out the stones

Leave the town – by bicycle, car or on an organised tour – and go in search of megaliths. At least 150 megalith sites have been found around Évora, suggesting this was an important area in neolithic times.

The Cromlech of the Almendres, 15km east of Évora, is the Iberian peninsula’s equivalent of Stonehenge, a site of around 95 lozenge-shaped stones. The first circle was created over 7,000 years ago. Set on a hillside, it looks towards Évora and its cathedral, raising speculation that there was probably a megalith there that predated the first church. There is no visitor centre or admission charge, and it’s a lovely, tranquil spot. The nearby Menhir of Almendres is a solitary 2.5m-high stone, reached on foot up a rutted track. As ever, its symbolism is unknown.

This is an agricultural area of cork trees, olive groves, sunflowers and vines. Getting to the stones will give you an opportunity to see cork oaks up close; trees that have been harvested are left with a deep red undercoat until their new bark grows. This is a key area for wine too, and many of the local wineries offer tours, tastings and chances to try local food. 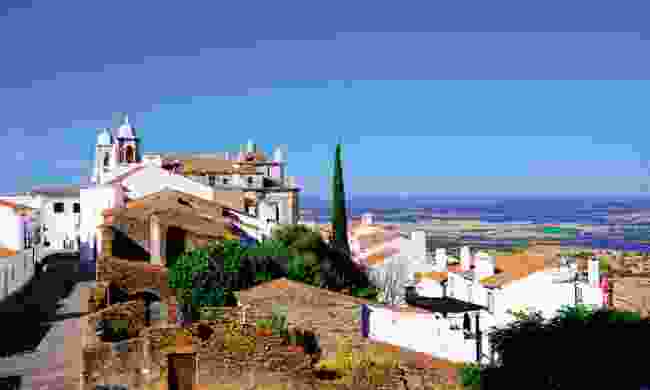 Day 3: Head for the hilltops

Explore the wider Alentejo region. It’s a quiet delight of rolling hills, hilltop villages and near-empty roads that are a pleasure to drive. Over the border in Spain, these pretty whitewashed towns would be on a well-worn tourist trail, but here they are crowd free. The region also has many beautiful old pousadas if you want to stay overnight.

The hilltop village of Monsaraz, looking towards the border, has had a turbulent history of invasion and counterattacks, involving the Moors, the Spanish, the Knights Templar and a 14th century Duke of Cambridge. Megaliths dot the area around it.

Nearby Lake Alqueva is the largest manmade lake in Europe and is a certified Dark Sky site, so excellent for star-gazing. Stay on a houseboat, paddle a canoe or take a boat trip. Or hire a bike to explore along the shore and the surrounding villages. There is also a series of walking trails.

Beja is another town of historical significance. It was founded in 48 BC by Julius Caesar and has a well-preserved castle (with superb views) and an interesting old centre. For another castle fix, wind your way up to the gorgeous, wall-encircled hilltop village of Marvão.

Top tip: Some museums and historic sites close for an hour or two in the middle of the day, so do as the locals do and have a long, leisurely lunch before continuing to explore. 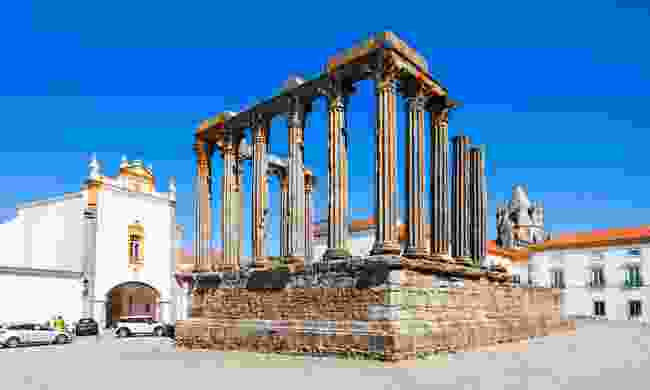 When to go: Spring and autumn are best. Temperatures can reach 40°C or more in summer. Winters are usually fairly mild, although there can be frost.

Getting there: TAP flies direct from London and Manchester to Lisbon from £59 one way.

From Lisbon airport take the metro to Sete Rios for a bus to Évora; buses run hourly, take 90 minutes and cost €11.90 one way. Alternatively, take the metro from the airport to Oriente station; trains to Évora run four times a day, take 90-100 minutes and cost from €12.40 one way. Cars can be hired from Lisbon airport. The drive takes 90 minutes, and includes crossing Europe’s longest road bridge.

Getting around: Évora is compact and easily walkable, but wear flat shoes – there are cobblestones. To explore the wider area you’ll need to hire a bike or a car, or arrange a tour. The tourist office has many options.

Where to stay: Convento de Évora, aka Pousada dos Loios, occupies a former 15th-century monastery facing the Roman temple. Also in the old town, M’AR de AR Muralhas has a pretty garden, swimming pool and spacious rooms. Convento do Espinheiro, a restored 15th-century convent, sits on a hill a short drive from the city and has luxurious rooms.

Where to eat: Service is haphazard at Café Alentejo but the food makes up for it. Taberna Típica Quarta Feira offers a warm welcome. Tábua do Naldo is friendly and highly rated.

Tour operators: Sunvil offer a range of options to the Alentejo region and Évora