The building of Bilbao's Guggenheim 20 years ago saw a change in fortune for the old industrial city. Sarah Baxter samples its perfect pintxos and medieval delights with this short break guide...

Over the past few decades Bilbao has, as one barman put it to me, "washed its face". In the early 1990s, Spain's fourth-largest city was a former industrial powerhouse down on its luck. A grubby spot few city-breakers would think to visit. But then the Guggenheim showed up. Opened in October 1997, this strikingly innovative modern art museum - a ripple of sleek metal waves, designed by superstar architect Frank Gehry - helped transform the Basque capital into a must-visit destination.

The Guggenheim was widely heralded as one of the most important buildings of the late 20th century, and its success spurred a larger-scale revitalisation of the city. Tourist euros began to pour in, and as the museum celebrates its 20th anniversary, now is the perfect opportunity to appreciate two decades' worth of regeneration. In short: the city has never looked so good.

That said, much of Bilbao's appeal is found in the areas that predate its flagship art gallery. The city was founded in 1300, with the three streets of the Casco Viejo (Old Town) originally enclosed in a defensive wall. In the 15th century four more were added, creating the toast-rack-like Siete Calles (Seven Streets). Until recently, this was considered a no-go area, but a spruce-up has seen its alleys tidied and made safe, without destroying their soul. 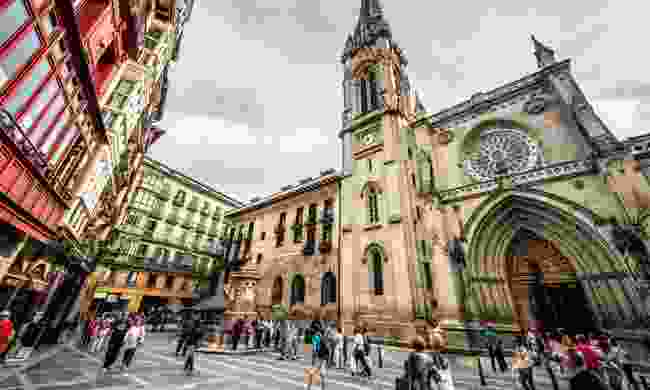 Haberdashers, beret shops, charcuterias and fishmongers still outnumber the eco-vegan eateries and trendy boutiques. And every other doorway seems to belong to a café or bar, be they hipster-honed lounges or unreconstructed joints draped in the ubiquitous red-n-white stripes of the Atlético Bilbao football team.

The city's food culture is another long-standing attraction. In summer 2018, Bilbao will host the World's 50 Best Restaurants Awards. This is only the third time the prestigious ceremony has been held outside London, and is an indicator of the Basque region's culinary heft. However, while there are Michelin stars to be found in Bilbao - not least Nerua, a restaurant found inside the Guggenheim itself - the best eating is far more egalitarian. This is the capital of pintxos, the Basque take on tapas-style finger food. Across the city you'll find bar counters topped with tasty tidbits, from tortilla chunks and jamón bocadillos (weighty sandwiches) to gourmet creations using foie gras and seaweed. The local way is to eat a pintxos or two with your glass of txakoli (slightly sparkling dry white wine) or zurito (small beer) before moving on to the next place for more.

So, the food is great and the street-life is lively. There are galleries, a great theatre and general good vibes. The seaside is also close, too. In the end, the Guggenheim might be the icon that inspires your visit to Bilbao, but it probably won't be the sole reason you're so glad you came. 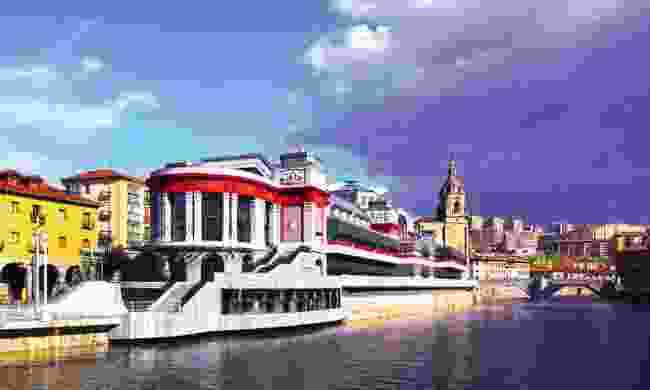 When to go: Year-round. July to August can be hot and heaving, with most festivals held in the summer months. Winters are mild but wet. Spring and autumn are generally quieter and cooler.

Getting there and around: Several airlines fly to Bilbao from the UK. EasyJet (easyjet.com) flies from Edinburgh, Manchester, Bristol and Stansted; flight time is from two hours. Bilbao's airport is 10km north-east of the city. A bus to the centre takes around 20 minutes. Brittany Ferries (brittany-ferries.co.uk) connect Portsmouth and Bilbao twice a week; crossings usually take from around 24 hours.

Where to stay: Iturrienea Ostatua (iturrieneaostatua.com) is a homely pensión in the heart of the old town. Also in the Old Town is the small, quirky, movie-themed Caravan Cinema (caravan-cinema.com). Facing the river, between the Old Town and the Guggenheim, the Barceló Bilbao Nervión (barcelo.com) is a neat, well-located base.

Where to eat: Everywhere! Pintxos bars tempt on every street corner. The Plaza Nueva, in the old town, is lined with them: try Gure Toki (guretoki.com) and Café Bar Bilbao (bilbao-cafebar.com). To mark the Guggenheim's anniversary in style, sample the Michelin-starred molecular gastronomy menu at its fine-dining restaurant, Nerua (neruaguggenheimbilbao.com). 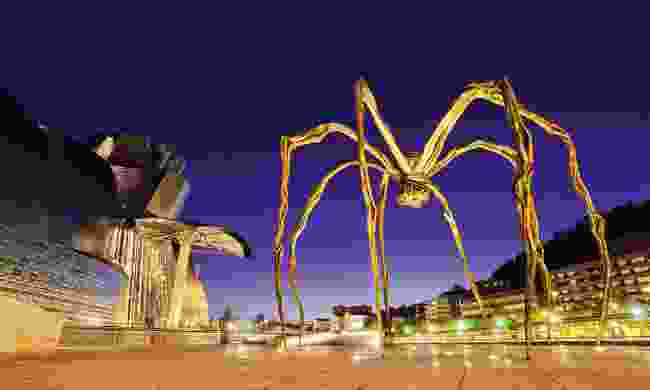 Start at the Mercado de la Ribera to see the stalls of this art deco market hall at their liveliest - though return later for live music at La Ribera bar (lariberabilbao.com).

Next, stroll the Siete Calles, which fan out south from the gothic-style Catedral de Santiago - there's hours of eating and ambling to be done along these narrow lanes. Browse shops selling everything from live snails to tea towels; some double as studios, so you might spot the owner at work. For lunch, nearby Baster (basterbilbao.com) is a modern spot, or stroll to Plaza Nueva for your pick of pintxos bars.

For a cultural aside, Museo Vasco is a 17th-century Jesuit cloister filled with Basque relics, or head for the Arenal where San Nicolás Church and Arriaga Theatre face off over a park.

Follow Nervón River north and cross the City Hall Bridge to reach the Bilboats jetty. Cruise for an hour (bilboats.com) or stroll the riverbank, crossing via the skeletallooking Zubizuri Bridge, designed by Santiago Calatrava, before finishing at artist Jeff Koons' topiary Puppy, which guards the Guggenheim.

Pick up where you left off, at the Guggenheim. Walk around it, to see Louise Bourgeois' arachnid Maman sculpture, then head inside (guggenheim-bilbao.eus). The collection changes frequently but includes the likes of Rothko and Warhol, while an exhibition of David Hockney's portraits is also upcoming (10 Nov 2017-25 Feb 2018).

Nearby, the Museo de Bellas Artes (museobilbao.com) is less showy but arguably more interesting, hosting older works and lots of Basque art, as well as El Grecos and Picassos. Outside, the fountain tinkled Dona Casilda de Iturrizar Park is a lovely spot to pause before heading into El Ensanche, a business district laid out in the 19th century. It has many wide avenues lined with grand buildings, high-end shops and little bars. It's also home to Azkuna Zentroa (azkunazentroa.eus), an old wine warehouse turned into a huge media space by designer Philippe Starck. Pop in to see what's on, go to the cinema, admire its eclectic interior columns or take a swim in the glass-bottomed rooftop pool.

Finish with a bar crawl along one of the neighbourhood's pintxospacked streets - try Calle Garcí­a Rivero or Calle Diputación. 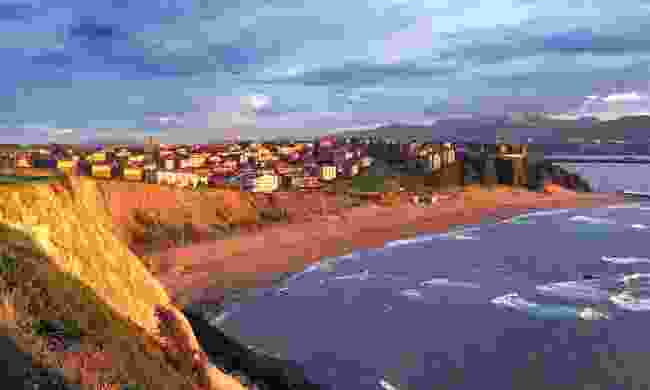 Seek some sea air on an easy day trip to the coast. The suburb of Getxo is a 25-minute Metro ride from the centre of Bilbao. Hop off Line 1 at Algorta and walk down to the old fishing port, a tiny cluster of almost Cornwall-like whitewashed houses where you can get a plate of calamari and a txakoli or two.

Turn right to follow the coast past Arrigunaga Beach to the lighthouse and sea cliffs of La Galea. Or turn left to walk along Ereaga, Getxo's most popular stretch of sand, which is lively in good weather and a nice spot for an ice cream. Continue along the big villas promenade, a series of grand mansions erected in the 19th and early 20th centuries.

Soon you'll arrive at the Vizcaya Bridge (puente-colgante.com), completed in 1893. It's the oldest transporter bridge in the world, comprising a gondola suspended on cables from 61m-high towers - the idea was to link Getxo with the old port of Portugalete, across the river, allowing for big ships to pass through. Ride across for 40¢ or pay for the tour, which includes far-reaching views from the 45m-high gantry.

In Portugalete, stroll the old town streets and 16th-century basilica, then catch Metro Line 2 back to Bilbao.