Bath’s Royal Crescent celebrates its 250th anniversary this summer. The city has plenty of historic sites to explore, from crescents and curves to baths and Roman ruins, not to mention foodie pleasures...

You see it happen a lot: a tourist stops at the corner of Bath’s Royal Crescent, takes a selfie and then turns and walks away. This gorgeous sweep of honied stone, which celebrates the 250th anniversary of its founding this year, is one of the main tick list sites of the World Heritage-listed West Country city. But many visitors don’t even stroll along it. Even fewer realise it’s just one of Bath’s six and a half handsome Georgian curves.

Gorgeous, compact Bath has long attracted short-breakers to its Roman ruins, naturally heated mineral waters and well-preserved Georgian centre. But the Royal Crescent, a 150m-long half-moon of Palladian houses, is the poster child of the city.

It was built between 1767 and 1775 by architect John Wood the Younger, whose father, John Wood the Elder, was responsible for many of Bath’s fine buildings, including Queen Square, Prior Park and The Circus.

The Royal Crescent was designed to cater to the emerging middle classes – the nouveau riche who couldn’t afford a country pile, so instead hoovered up grand residences in fashionable cities.

While Wood ordered the Royal Crescent’s façade to be perfectly symmetrical, the interiors and rears could be modified by the owners, thus no two houses are the same.

From the back, this illustrious street is a mass of annexes and add-ons. No. 1 Royal Crescent, now a museum furnished in 18th-century style, offers a hint of what lies within. Number 16 is the Royal Crescent Hotel, where anyone can order a cream tea (or, better still, cocktails) in the garden. 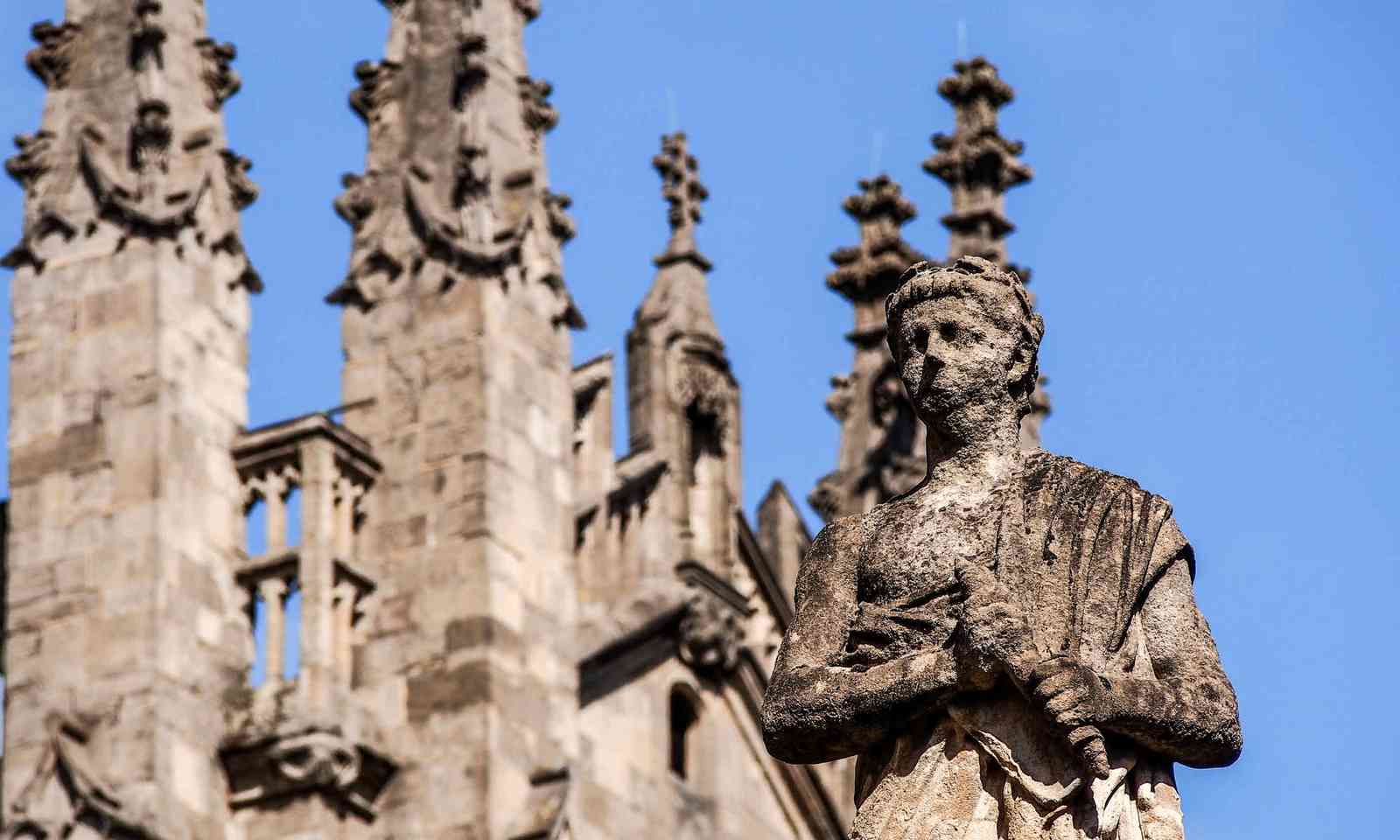 But what of Bath’s other five and a half curves? Wood started a craze for crescents, a handful of which cropped up around the city between 1780 and 1830. Not only are these streets handsome, with their columns, flagstones and ironwork, they provide an excuse for exploring the city beyond the usual tourist haunts. Also, most of the other crescents are up high, affording commanding views of Bath’s golden stone and spires, as well as the lush hills of the Avon Valley rippling off in all directions.

One of Bath’s most famous commentators would definitely have advocated a crescent visit. Jane Austen, who died 200 years ago this July, lived in Bath from 1801 to 1806 and set two of her six published novels here. In Northanger Abbey, the characters Catherine and Isabella ‘hastened away to the Crescent, to breathe the fresh air of better company’, walking arm in arm ‘with much enjoyment’. Every 21st-century visitor should do the same.

Diary Date: Visit on 29 July for the free Day in the Life of the Royal Crescent: Picnic in the Park, part of the area’s 250th celebrations. 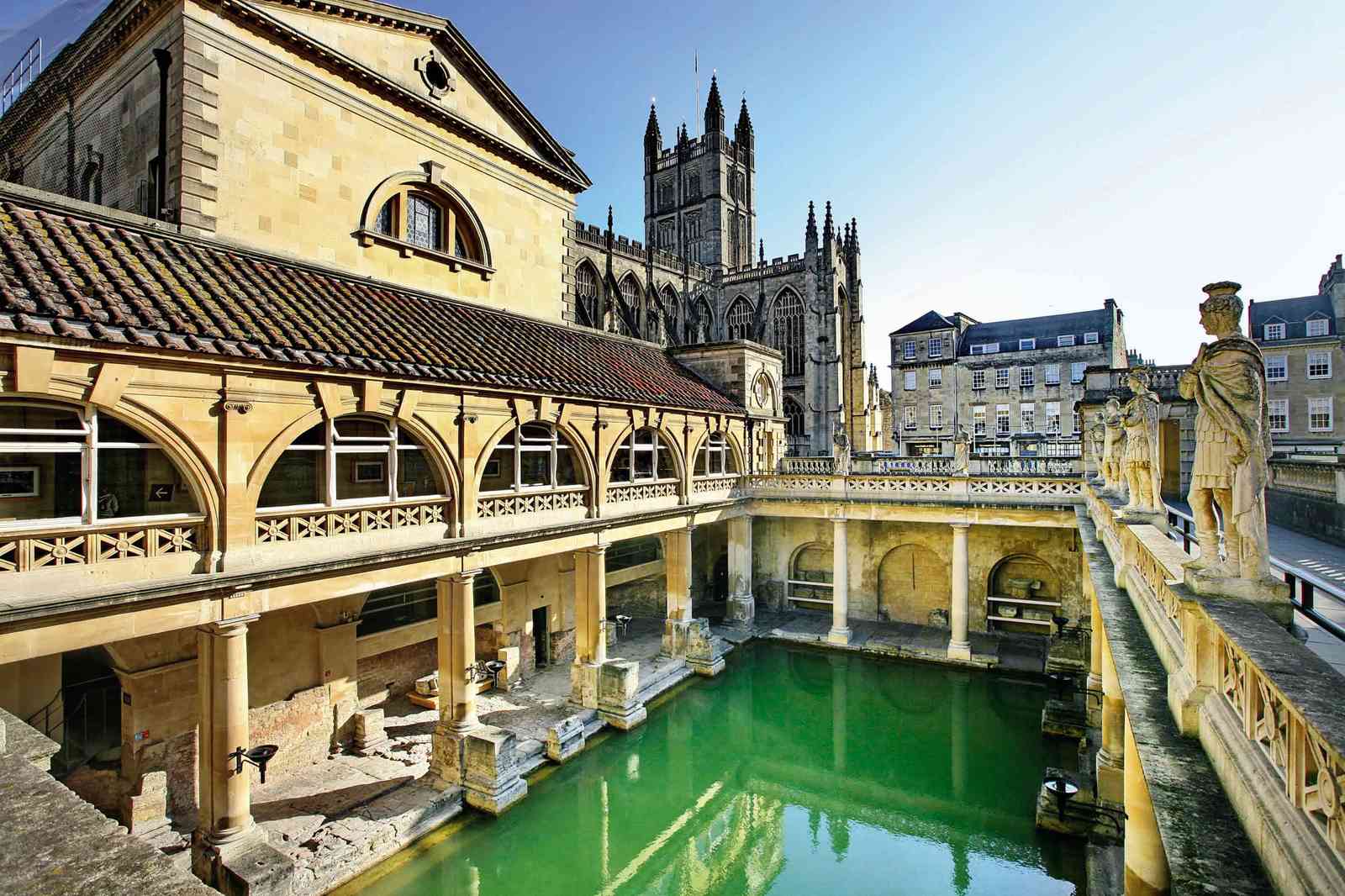 Begin at Bath Abbey, where a church has stood since 757 AD. The Roman Baths, home to the hot springs that first attracted the Romans, are next door; it’s now an excellent museum. To actually bathe in mineral-rich waters, head instead to the Thermae Bath Spa, which also has a fine rooftop pool.

Austen fans can pay homage at the Jane Austen Centre. Alternatively, toast her memory at the Canary Gin Bar, distillers of Bath Gin with its winking ‘Gin Austen’ label. The bookshop Mr B’s Emporium of Reading Delights, one of the city’s many indie stores, is on the same street. Drop in on The Foodie Bugle and the likably old-school Guildhall Market for more.

Cross Pulteney Bridge for Holborne Museum’s art collection and Sydney Gardens, one of the last 18th-century pleasure gardens in the UK, then join the Kennet & Avon Canal. Turn south to return to town via the locks or north for a stroll (8km) to Dundas Aqueduct. 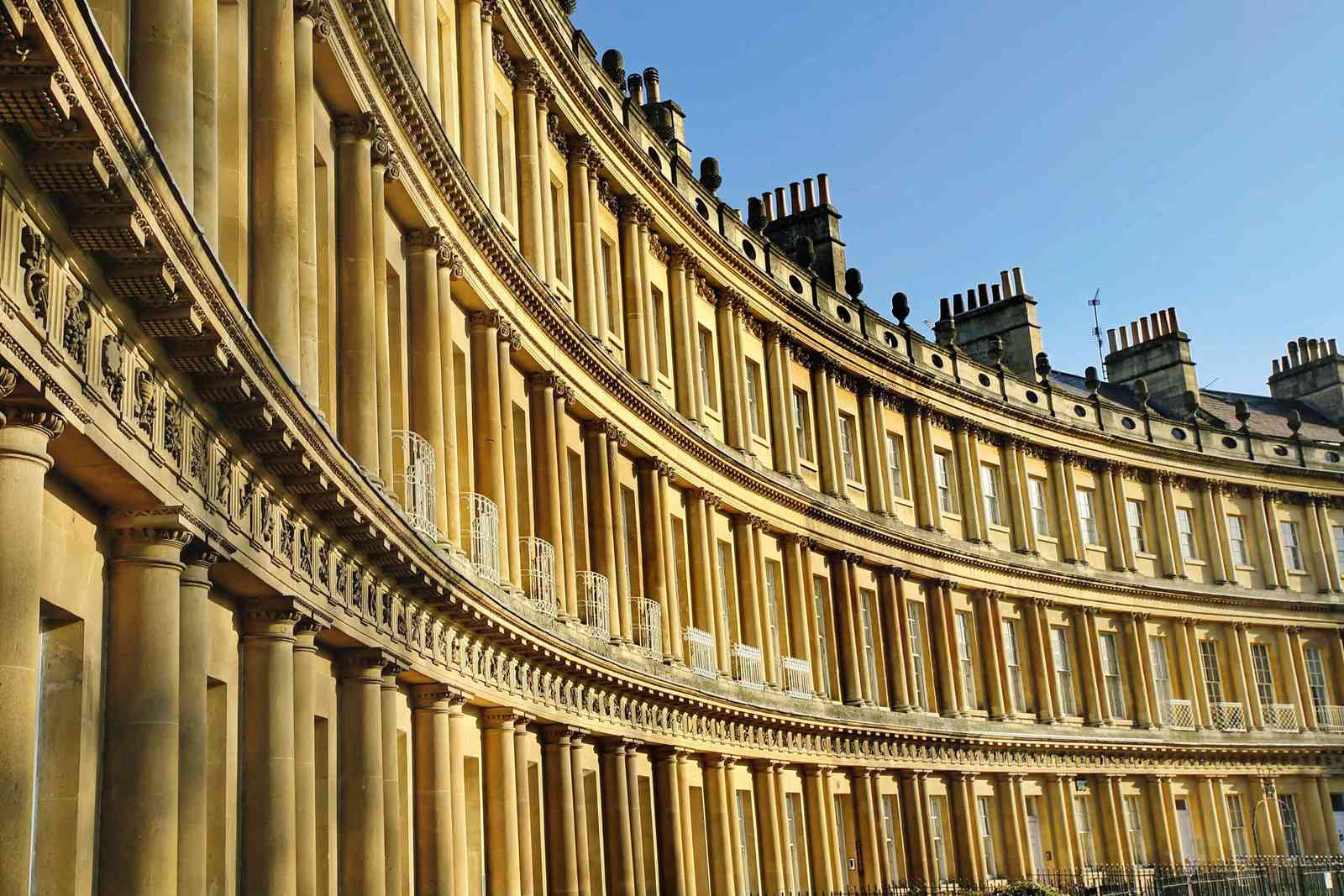 Start at the Circus, the halo of Georgian houses designed by John Wood the Elder that’s arguably Bath’s finest piece of architecture, then walk west to the Royal Crescent and promenade its historic cobbles.

Pop into Victoria Park, home to the Botanical Gardens, before strolling the hidden crescents of Cavendish Road and Marlborough Buildings. Here lies Cavendish, the semi-curve of Somerset Place and Lansdown. There are no tourists, just great views.

If you’re feeling energetic, head up, up, up Lansdown Road to the Hare & Hounds, which has the most astonishing beer garden, gazing out over glorious countryside. Otherwise, head down to reach Camden Crescent, another lovely lookout. The palm tree here adds exoticism to the panorama.

Continue down Lansdown Road, turning left down Guinea Lane to reach St Swithins Church, whereJane Austen’s parents were married. Then return to the city centre via Walcot Street, Bath’s old artisan quarter. Rest up at cooperative-owned pub The Bell, then browse shops including the gallery of local artist Nick Cudworth and the rather pungent Fine Cheese Company. 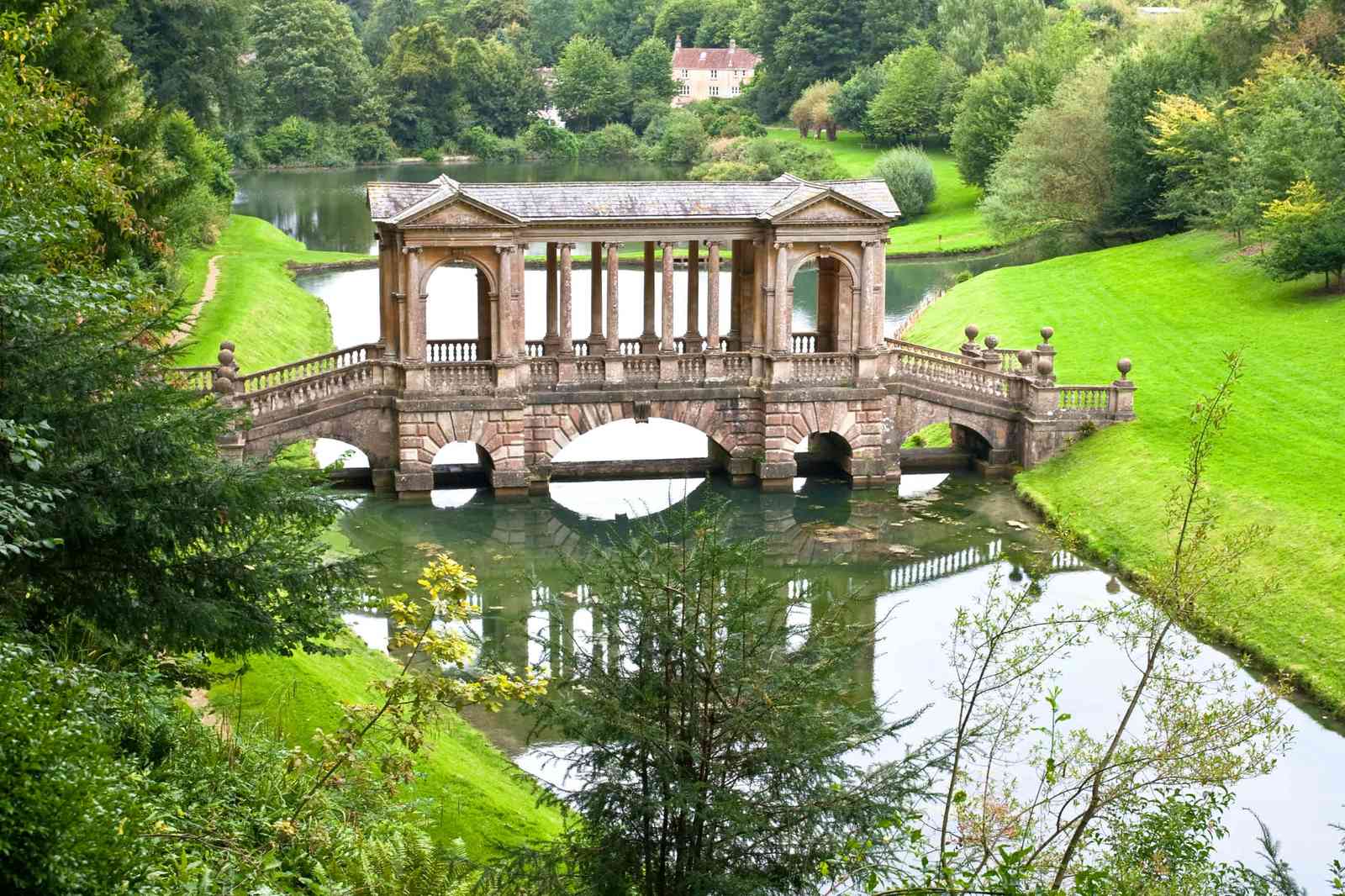 The Palladian Bridge at Prior Park Landscape Garden (Dreamstime)

Begin by walking through Green Park Station, which now houses artisan, vintage and farmers’ markets at weekends. This leads to Norfolk Crescent, where much of this less glamorous curve was rebuilt after being bombed during the Second World War.

Follow the river and cross near the train station, to the Widcombe area of Bath. The main parade here is a lively line of shops and pubs; walk along it, and past the White Hart pub, to start climbing Widcombe Hill. A little way up on the right is the bijou Widcombe Crescent, the city’s final, secluded honey-stone curve of 14 pretty houses.

A bit further up Widcombe Hill, you can pick up the Bath Skyline, a 10km circuit that reveals just how cuddled by countryside this World Heritage city is. The impressive route encompasses woodland, sheepgrazed fields, an Iron Age hill fort, an 18th-century folly and fine city views.

Follow the Skyline to the American Museum (£12), a treasure-trove of Americana in a quintessentially English setting, and Prior Park (£7.70), an 18th-century garden with a photogenic Palladian bridge. Finish among its lush grounds.

A useful tip: to get from Bath’s centre to the Skyline without walking up a huge hill, catch a bus to Bath University (U1, U2, U17 or U18) or take the free American Museum shuttlebus, which picks up from Terrace Walk (known as Bog Island). When to go: Year-round. Summer brings the most tourists. Lush spring and glowing autumn are quieter. Come in winter to warm up in the cosy Thermae Bath Spa and visit the annual Christmas market (Nov 23-Dec 10, 2017).

Getting there & around: Bath Spa station is five minutes’ walk from the Abbey; direct trains to the city run from Bristol (15 minutes), Cardiff (65 minutes) and London Paddington (90 minutes). National Express buses run direct to London Heathrow (2-3 hours). The nearest airport is Bristol; the Air Decker Bus Service links the airport to Bath in around 50-to-70 minutes. Bath is 16km south of the M4 (junction 18).

Where to stay: The Abbey Hotel is central and filled with eclectic art. The Halcyon Apartments are a set of classy city-centre flats with all mod-cons and Georgian detailing. Elsewhere, the Queensbury is a quirky boutique option with an excellent restaurant.

Where to eat: The Chequers, tucked a few streets behind the Crescent, is a great gastro-pub; The Oven does the city’s best pizza, and tricky-to-find Chapel Arts Café serves delicious veggie flatbreads. Corkage is a well-stocked wine-bar that also offers tasty small plates. And for a treat, try Hudson Bar & Grill or the innovative Menu Gordon Jones (advance booking is essential here).