Nothing is as it seems on the borders of northern Belgium, where doomed villages, old reserves and a revitalised Antwerp make for a wild escape... Cathedral of our Lady, Antwerp (Dreamstime)

The lady behind the bar looked defiant. “If the village goes, this is all gone. Then we go.” The man sat beside me raised an empty beer glass – it was as apt a summary as any. Yet as I gazed outside at couples taking selfies by graffitied walls, the doomed village of Doel seemed anything but.

Life on the edge of Europe’s second-largest port is a world away from the city it overlooks: Antwerp. There, a neo-Gothic station (having recently added a comics-themed amusement park) and medieval centre prove Belgium’s doyen of style has made an art of preserving its past in fun ways. Bistros crop up in old port buildings and tours of its sunken vaulted canals make even the sewer into a great day out.

I’d wandered Antwerp’s cobbles down to the old docks, where a former pump station is now a stylish bistro and a hip dining scene has sprung up beside two of the best museums in town. But Antwerp and Doel share two things: a river and a stubborn streak.

Those who work in Doel know its story by heart. It was in the 1970s that the Port of Antwerp first eyed up this 17th-century village, scratched out of the left bank of the River Scheldt, for its expansion. Since then, it’s been on borrowed time, and those few residents that remain (just seven live in the centre, with handwritten reminders of occupation dotting the windowsills) are the only ones still beating back the wrecking balls. But the protestors were smart.

Doel learned something from Antwerp. A decade ago, a protest group invited street artists to use its empty buildings as their canvas, creating a living gallery. It was a masterstroke. Since then, every inch of its red-brick terraces have been filled with murals and tags – chaos and creativity. I left the bar and circled past a 7m-high scratchy mural by the Ghent artist Roa – a gorilla clasping a bunch of flowers. It was just one of hundreds. Now locals by the dozen arrive to ferret about the broken-down village, knowing this could be its final summer.

I left Doel for the Dutch side of the border to hunt down another ‘lost village’. Here, the Scheldt meets the North Sea at the Drowned Land of Saeftinghe, a vast marsh that was once a settlement. Storms and the Dutch War of Independence took their toll on its dykes 500 years ago, as villages and lands were flooded to safeguard sea access to Antwerp. Today, it’s a reserve home to 200 bird species.

Help is needed to negotiate the marshes – tides and quicksands slurp down the unwary. I donned wellies to squelch estuarine trails edged by daisy-like sea aster and dancing bluethroats, the legend of Saeftinghe ringing in my ears: a fisherman was said to have caught a mermaid on the Scheldt and kept her. The water took its revenge, and they say you can still hear the village bells at night.

Many of the towns on the river were build on polders (reclaimed land) – even Antwerp. This is a region used to making something from nothing, but what it comes up with is always pretty special. 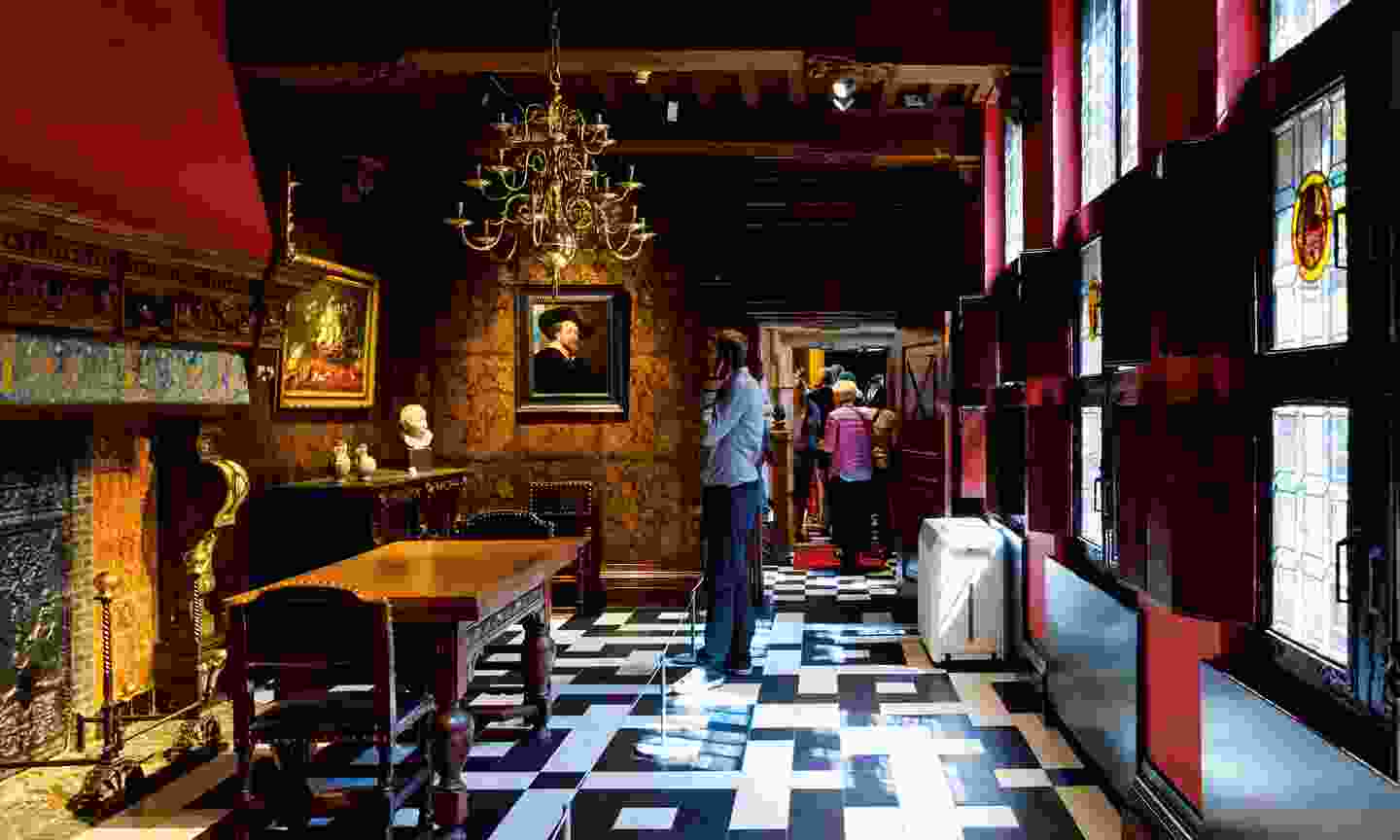 The 16th-century home of Peter Paul Rubens, which is now a museum (Dreamstime)

From the cathedral-like Antwerp Central – a neo-Gothic confection of iron, glass and marble built in 1905 – head to the boulevard of Meir for a pastry at Goossens, Antwerp’s oldest bakery (1884) on Korte Gasthuisstraat.

Off the Meir lies Rubenshuis, the 16th-century home of painter-cum-diplomat Peter Paul Rubens, and now a museum. Its garden is a treat, even if his best work scatters Antwerp. Stroll past Europe’s first skyscraper (Boerentoren) to Grote Markt and its gory Gothic statue of the city’s founding.

Stroll the medieval centre, padding the cobbles of Vlaeykensgang up to Reyndersstraat for lunch in a former convent at De Groote Witte Arend. Nearby, the Cathedral of Our Lady glowers moodily, its Gothic walls filled with treasures from the brushes of the Flemish Masters.

By the river is also the world’s first UNESCO-listed museum at Plantin- Moretus. Printing presses are the star here, smuggled out of France in the 1500s as printers were being burned alive for heresy. End in Billie’s Bier Kafétaria, near Groenplaats, for one of the city’s best cellars and an always filling stoofvlees (meat stew). 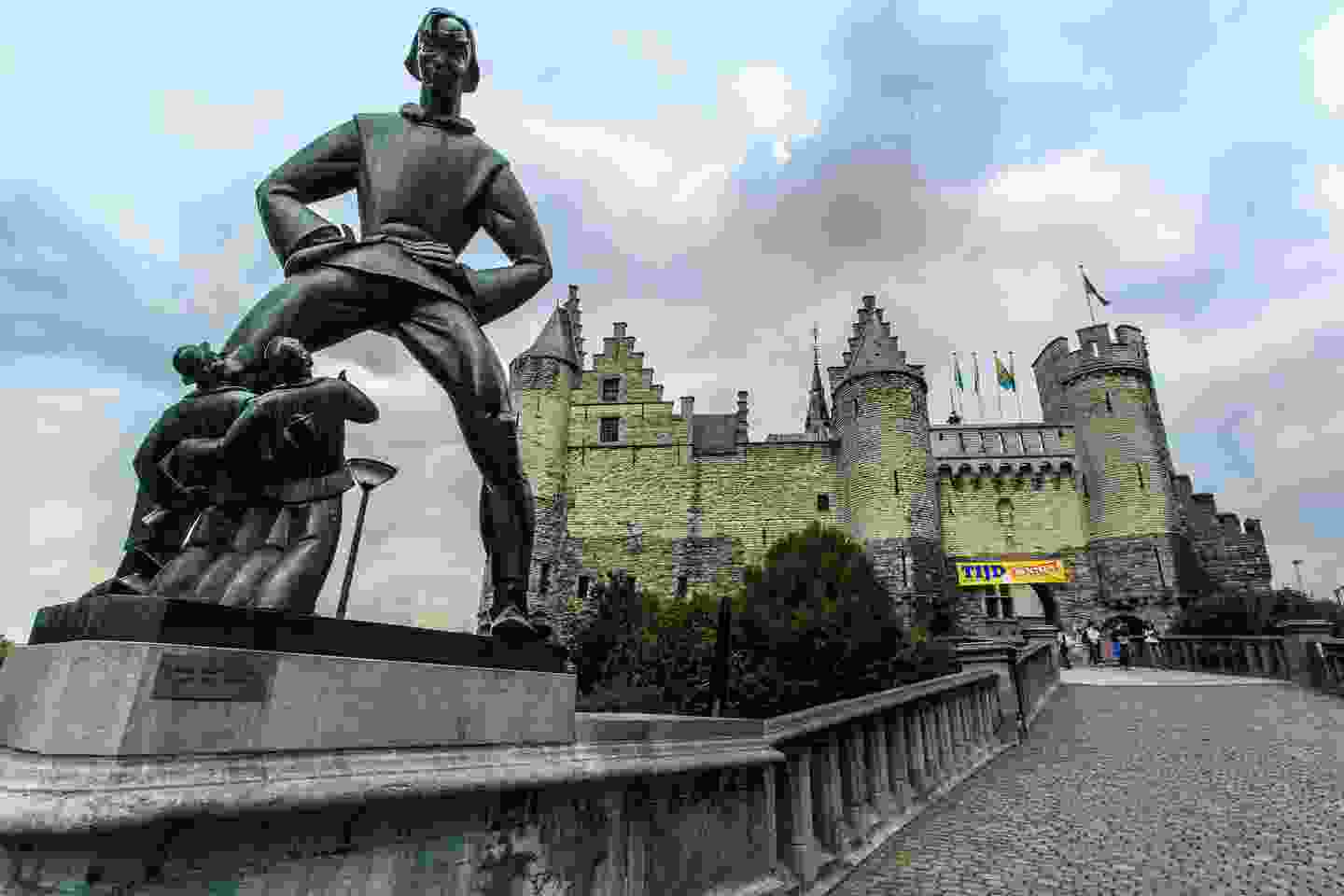 Day 2: A river runs through it

Don wellies and a protective suit to explore Antwerp’s network of vaulted canals on the oddly thrilling De Ruien sewer tour at Suikerrui. It’s a nostril-baiting trip into the waterways and tributaries that once lined the city until pollution saw them bricked over by the 1800s.

Next, trace the Scheldt north to Het Eliandje – past the ruin of Het Steen fortress, the city’s oldest building. Once a sleazy harbour, now the area buzzes with cafés and diners. Grab a snack, then unravel Antwerp’s maritime past at the Lego-like MAS museum, which also has fine views from its rooftop over the docks.

Nearby, the interesting Red Star Line Museum tells the story of two million Europeans who left for the US. After, grab a boat tour of the Scheldt itself – the Jan Plezier cruise even comes with pancakes! It’s not pretty per se, but its industrial scale is remarkable.

Once back on dry land, make for Sint-Jansvliet and take the wooden escalator to the 1930s tunnel linking the river’s left bank (Linkeroever), a good sunset spot. Then return for Het Pomphuis on Siberiastraat, a glitzy bistro set in a 1920s dockside depot, complete with cast-iron bilge pumps.

Top tip: When taking the De Ruien sewer tour, check the weather first; heavy rains mean the tunnels will likely be flooded, stopping deeper exploration of the vaulted canals that once lined the city above ground. 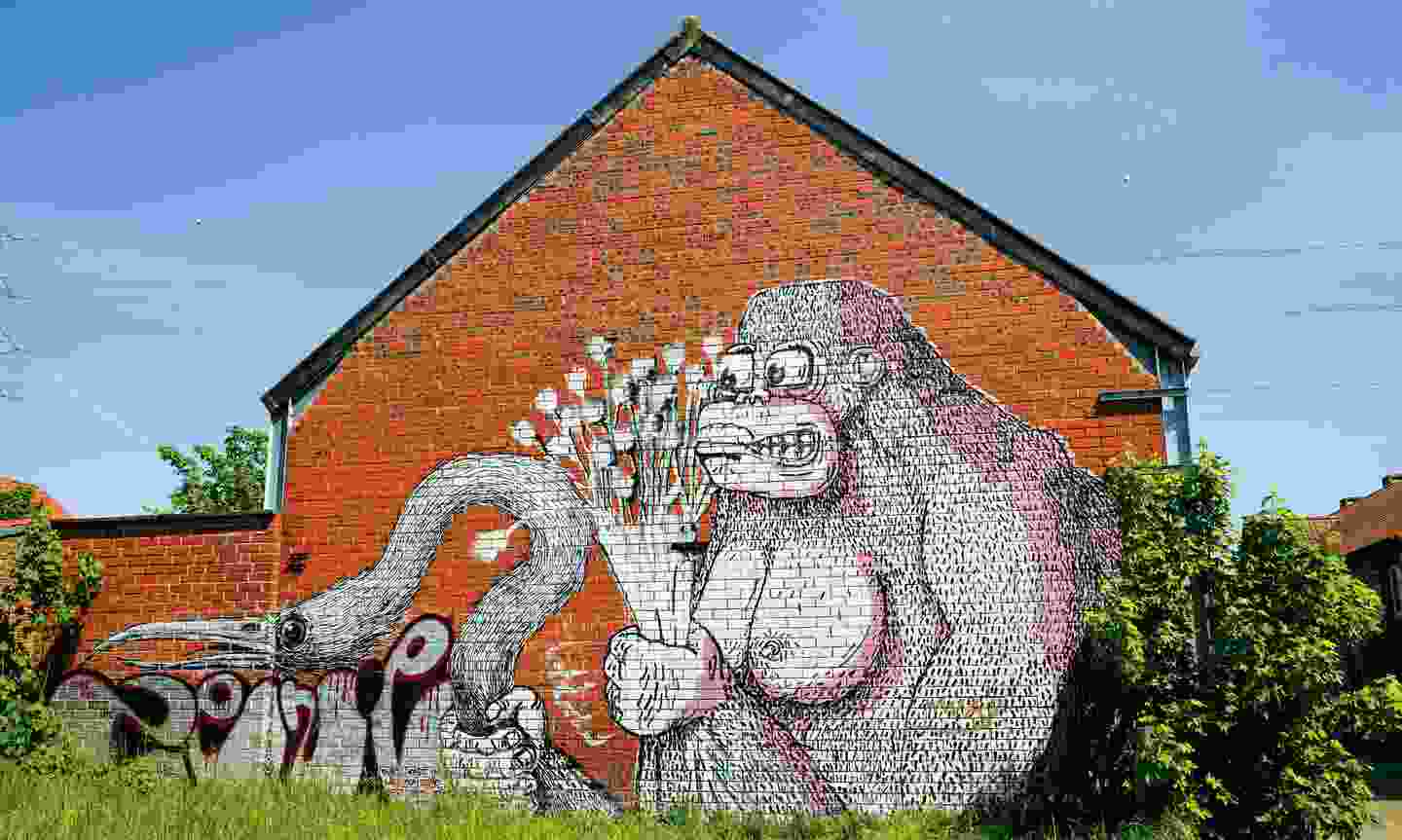 Hire a car and trace the Scheldt north (along the N101) to link up with the R2 road, which crosses the great river. On either bank lie the 16th-century forts of Lillo and Liefkenshoek, built first to keep out the Spanish and later repurposed by Napoleon to fend off the Brits. There’s interesting exhibits and fine walks along the dykes in this last slice of greenery left in the port.

From here, it’s a 25-minute drive to Doel, Beveren’s ‘doomed village’. For a ghost town it can be quite busy, with a pop-up music bar and a few cafés (including one inside its 400-year-old mill) all good places to stop. Stroll the graffitied streets, keeping an eye out for artist Roa’s murals. No one preserves the work; tags, scrawls and grand artworks fight for space, but it’s the sense of a village clinging on by its fingertips that makes it unmissable.

After Doel, head to Saeftinghe, just over the Dutch border at Emmadorp. The treacherous salt marshes require a guide who can take you out over its sunken villages to spy curlews, sea eagles, golden plovers and lapwings amid the mud.

Finish in Antwerp at The Jane, a church-set, Michelin-starred gem, its stained glass inspired by the chef’s tattoos – tasting menus only. A fine symbol for a city always evolving. 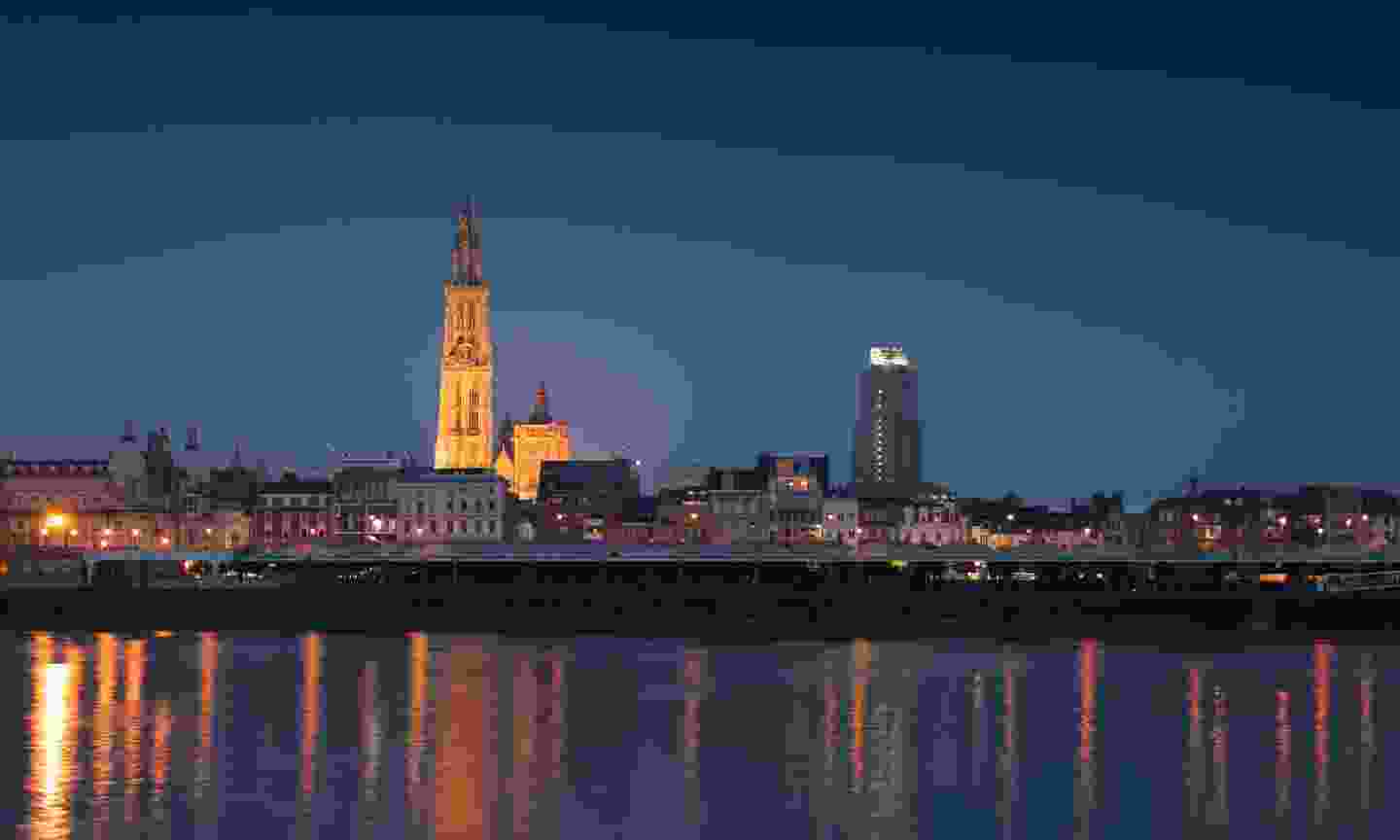 The skyline of Antwerp by night (Dreamstime)

When to go: Year round. Look out for the lively Doel Village Festival, which takes place on 12 August.

Getting around: Antwerp is best explored on foot, though a handy ‘pre-metro’ tram network threads the streets. A ticket is valid across the bus network, too. You will need to hire a bike or car to reach Doel and Saeftinghe.

Where to stay: Stylish De Witte Lelie is a boutique hotel sprawled over a trio of 17th-century houses in Antwerp’s medieval heart. Closer to the centre, off Grote Markt, lies Hotel Julien, an uber-hip courtyard stay whittled into the narrow townhouses – try to grab a room overlooking the cathedral. Or for a dash of eccentricity, Boulevard Leopold is a fun B&B, all standing bathtubs and vintage chic, in the city’s Jewish Quarter.

Where to eat: Antwerp is full of old industrial or religious haunts turned into hip eateries, from the pumphouse of Het Pomphuis  to the former convent of De Groote Witte Arend, to the Michelin-starred The Jane – a former church with tattoo-inspired stained glass. Then there’s the city’s bars, with Billie’s Bier Kafétaria (+32 3 226 31 83) serving up 350-plus brews and some hearty Flemish fare, too.