As tomorrow is Palm Sunday – the first day of Semana Santa, or Holy Week – we look at how and where you can mark the occasion

Palm Sunday marks the beginning of Holy Week, an annual Christian holiday held each year in the last week of Lent and the week before Easter. It is believed to be the anniversary of Jesus descending from the Mount of Olives and entering Jerusalem on a donkey, as crowds welcomed him by waving palm branches.

The next day, Holy Monday, Jesus cursed a fig tree for not bearing fruit, which some believe is symbolic of people who weren’t true believers. The following day, Holy Tuesday, is when Jesus predicted his death – while Holy Wednesday marks the day Judas betrayed him. Maundy Thursday commemorates the Last Supper. Good Friday is a sombre day – the day the Romans put Jesus on a trial then crucified him, while Holy Saturday, also known as Black Saturday, marks the day when he was buried in a cave. But the mood lightens on Easter Sunday, which is a celebration of Jesus’ resurrection. Here are three places you can participate in the celebrations. 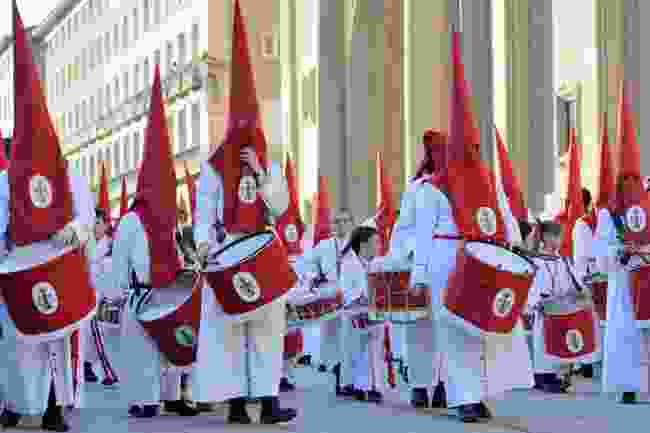 A procession on Good Friday in Zaragoza, Spain (Astudio/Shutterstock)

You can watch penance processions through the streets across Spain, particularly in Cordoba, Granada, Malaga and Seville in Andalusia. Marching bands often accompany a parade of floats topped with wood and plaster sculptures, which depict scenes from Holy Week events. Processions in Castile and Leon have a more solemn feel. Participants wear a tunic and a hood with a conical tip which covers their face in a tradition that dates back to medieval times. They often carry candles or wooden crosses, walk barefoot and sometimes wear chains on their feet. 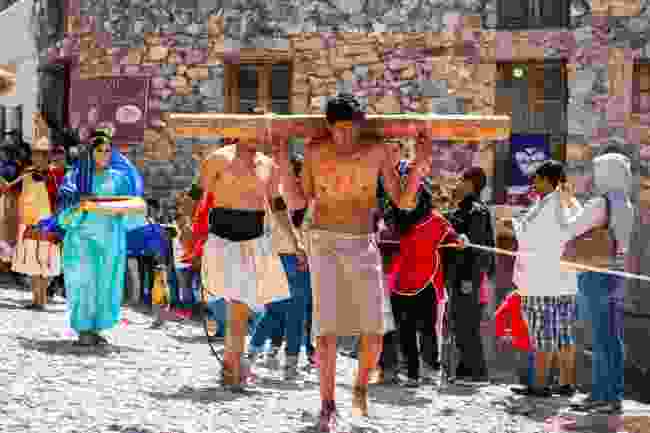 On Palm Sunday, inspired by the biblical story of Jesus being welcomed into Jerusalem, locals weave palm leaves into crosses or other intricate designs, then sprinkle them with holy water. In Taxco, south west of Mexico City, you can join spectators to watch a donkey carry a wooden statue of Jesus from a town 6km away. The donkey is followed by children dressed as angels, older girls dressed in white and walking barefoot and adults bent at the waist who stop occasionally to whip themselves.

Processions and performances take place most days throughout Mexico, but particularly on Good Friday, when Jesus’ crucifixion is re-enacted across the country. In Iztapalapa, in the east of Mexico City, two million spectators gather to watch 4,000 locals perform a passion play depicting Jesus’ capture and crucifixion.

On Holy Saturday, locals burn effigies of Judas and dress statues of the Virgin Mary in black to symbolise her mourning the death of her son. The mood lightens on Easter Sunday with church bells and a festival atmosphere. Common street food dishes include fried fish, plantain and pambazos (fried spicy sandwiches), as well as pancakes, ice cream, sweetened crushed ice and desserts made with coconut and tamarind. 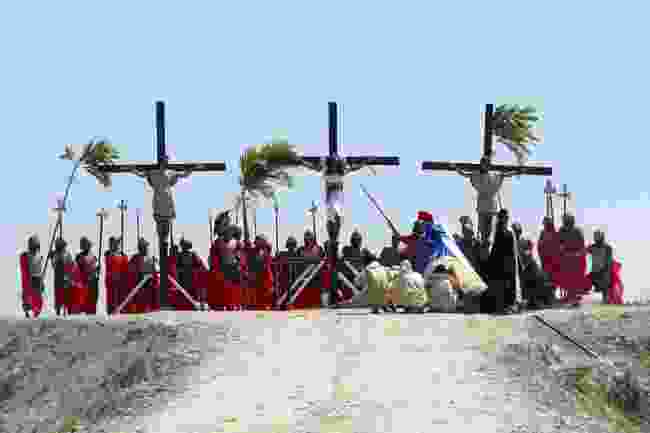 Locals nailed to a cross in Pampanga, Philippines (Tony Magdaraog/Shutterstock)

Most Filipinos observe Holy Week in their home town, placing palm leaves above their front doors on Palm Sunday to ward off evil.

As in Mexico’s Taxco, in San Fernando to the north of the capital of Manila, some believers self-flagellate or submit to being nailed on to a cross. It’s quite a sight.

On Good Friday, at 3pm – the time Jesus is thought to have died – TV and radio stations go off air for a period of reflection which continues until Easter Sunday, when floats and carriages depicting biblical scenes parade through the streets.