With its mighty peaks and rugged coast, Scotland has endless appeal to photographers. We caught up with some professional landscape snappers to discover their favourite Scottish walks...

My favourite walk in Scotland is the West Highland Way, from Glasgow to Fort William. I did it with a wonderful writer named Adam Nicolson for the National Trust Book of Long Walks.

That was a really good experience, partly because it’s a dramatic mountainous landscape but very safe. You can walk and feel quite heroic, but at the same time you know you’re as safe as houses and that you’ll definitely have somewhere to eat and somewhere to sleep every night. If you’re not a heroic Ranulph Fiennes-type of explorer you can still feel a great sense of achievement, even though you know you’re always fine.

It's a really lovely walk with the mountains, lochs and so much contrast along the way.

2: The Study, on the Pass of Glencoe 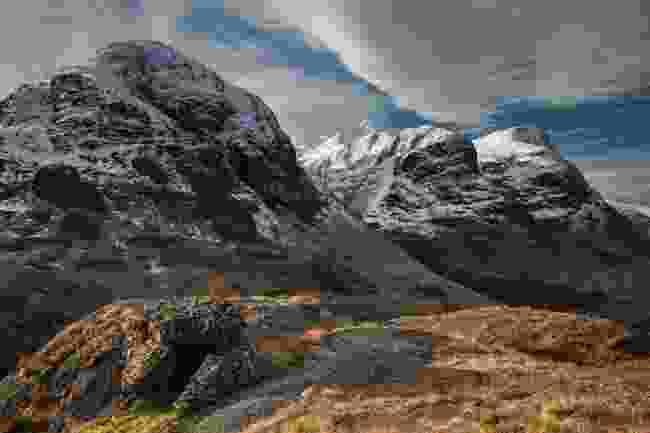 I first completed this walk in 2006 and have repeated it almost every year since as part of the photography workshops that I guide. Park in one of the laybys on the north of the A82, where the old military road crosses the main road, then follow the old military road in a westerly direction for about a kilometre before a final scramble up to the viewpoint from which this view of The Three Sisters was taken at The Study.

The beauty of this walk is that the full view doesn’t present itself until the last minute, when it becomes possible to see the full majesty of Glencoe laid out before you. The Three Sisters are often shrouded in cloud, and the best photographic opportunities occur either in late morning or at the end of the afternoon.

This is a short and easy walk, mostly on a good path with a fantastic reward at the end. For me, it’s perfect. 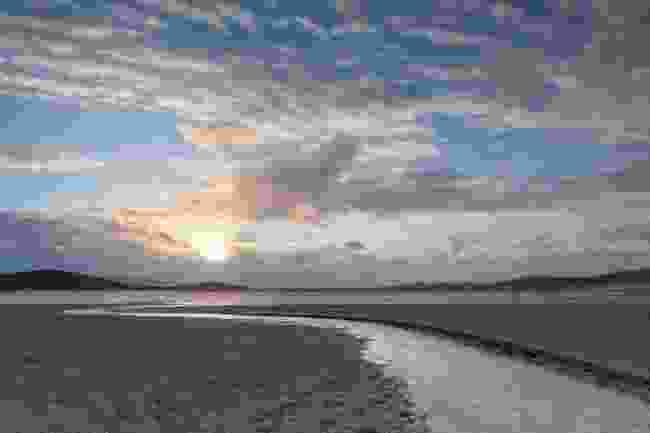 After the long journey to get to the Hebridean island of Harris and Lewis, the anticipation is rewarded by the finest of all beach walks. To wander through the high dunes and out onto the pristine white sands of Luskentyre is to enter a place of sublime beauty. Emerald waters and ever-changing skies with views across to the Isle of Taransay make this often deserted beach my favourite place to walk – not just in Scotland, but the world.

The beach is located a short drive from the small harbour of Tarbet in the middle of the island. A right turn from the main road always quickens my heart, as you snake out along the single-track road to Luskentyre. After just a couple of miles, the road comes to an end in a small parking spot beneath the high dunes, and a path wends its way between them to the beach. Nothing can prepare you for the combination of white sand and deep blue waters here.

You can walk westwards around the headland for two or three miles at mid-to-low tide, often barely seeing a soul. No matter if the weather is tranquil or turbulent, as the weather flows in from the wild Atlantic, it is a place of supreme wilderness. Some places have the ability to feel special to just us. This is one of those places. It will always feel like it's yours, and yours alone.

Take your camera – no one will believe your description otherwise. And if you can take a dog, your walk will be complete, for there can be no finer companion on this walk. 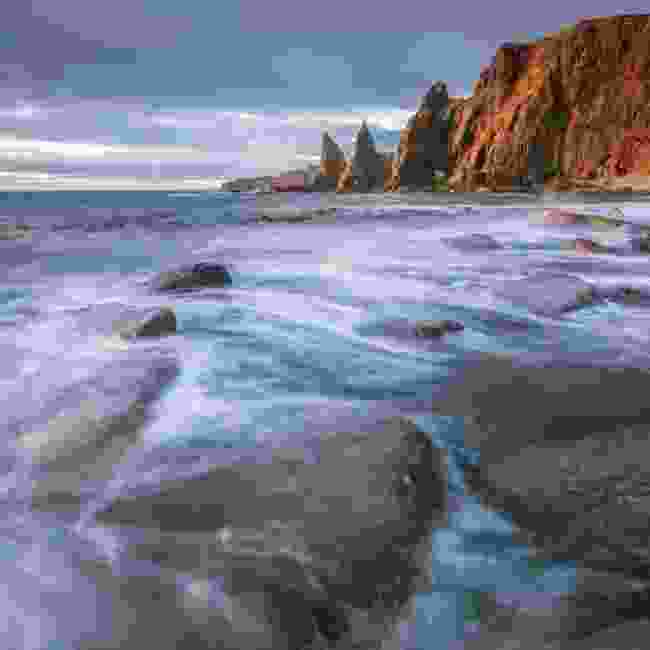 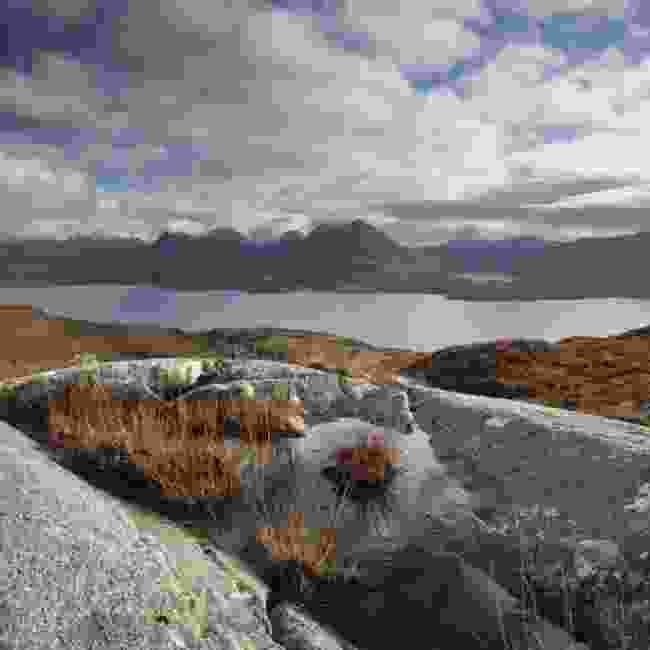 A short drive to the east from the busy touristy village of John O’Groats, there’s a short yet spectacular coastal walk along the far north-eastern tip of Scotland. On a clear day, magnificent views as far as the Orkneys await those who venture out along the three-mile (there-and-back) clifftop walk. You may even delight in finding yourself alone there, as I was when I scouted this location for a photography tour.

Although this walk could be completed in little over an hour, I’d recommend taking several hours. Park at the lighthouse and follow the signs south to the Stacks of Duncansby, sticking as close to the cliff edge as possible for the best views of these wonderful sea stack formations standing proud in the North Sea. Along the way, keep an eye out for the seabird colonies and seals that frequent the area.

The grassy path can be boggy in places, and the occasional duckboards can be slippery. For the adventurous, there’s also a steep and sometimes slippery path that leads down to the rocky shore. Once you’ve walked beyond the last stack, I suggest that you stay awhile, enjoy the views, and take in some of Scotland’s finest fresh sea air.

Ideally, aim to walk this route starting just before dawn with a clear horizon over the sea. Early light illuminating the cliffs and turbulent seas will add to the atmosphere in this stunningly beautiful setting. This is both a walker’s and photographer’s paradise. I plan to return here many times in years to come. 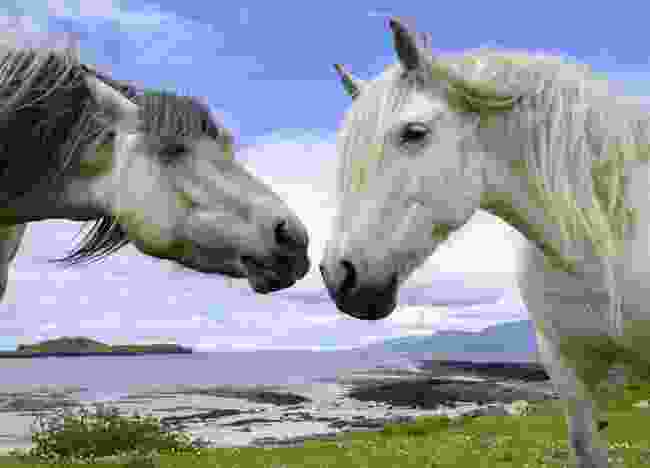 The Isle of Muck is the smallest of the Small Isles, a tiny archipelago of islands in the Inner Hebrides off Scotland’s west coast, which includes Canna, Eigg and Rum. It is one of the most peaceful places on earth. Spending an afternoon there is like re-entering the real world.

I visit this island every June, landing at Gallanach on the north coast where ponies, cattle and sheep can be found on the white sandy beach, grazing on seaweed and sweet machair grasses. The piping calls of oyster-catchers echo around the bay.

Measuring one mile long, the walk is simple – though getting there is less so. Follow the road to Port Mor on the south side of the island: there is only one road. It is fringed with meadows full of flowers from which the rasping calls of corncrakes can often be heard. Larks and pipits provide a higher stratum of sound as they hover in the clear blue sky.

There is a wonderful tea shop at Port Mor, and an attractive harbour. It’s all completely relaxing.

Light & Land run photography holidays and workshops across the UK and worldwide, to destinations such as Italy, Norway, Kyrgyzstan, Albania and Namibia. The trips are guided by Charlie Waite and other photographers, including Joe Cornish, Doug Chinnery and Phil Malpas. See lightandland.co.uk for details.

The company is celebrating their 25th anniversary in 2018 with an exhibition, Evolving Landscapes, at the OXO Gallery on London’s Southbank from July 18-22, featuring photos by Charlie Waite and other Light & Land photographers including Joe Cornish, Antony Spencer, Sue Bishop and more. See lightandland.co.uk/25-year-anniversary for details.