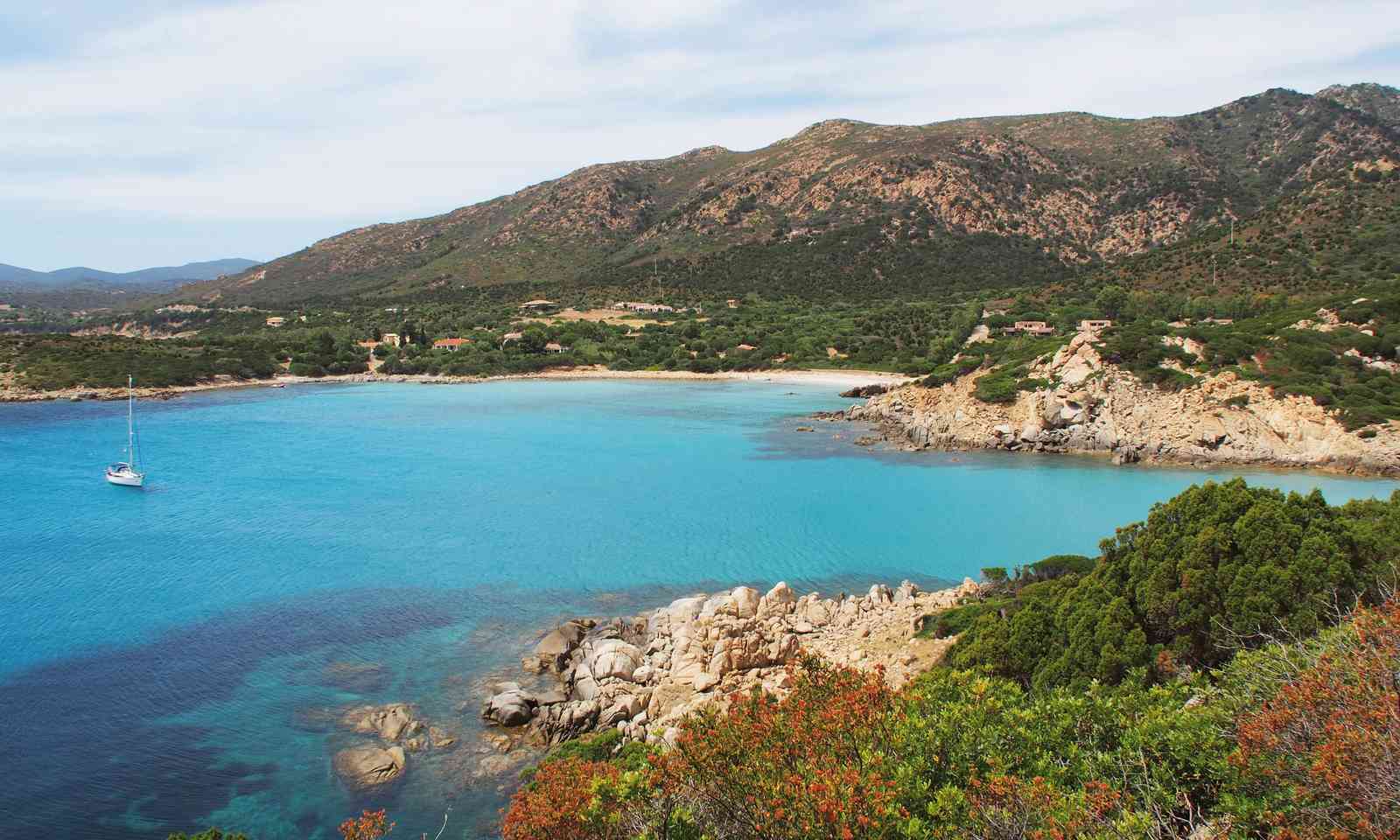 The coast near Pula (Dreamstime)

The 25 kilometre coastal drive from Chia to Teulada in Southern Sardinia is off the beaten track and a complete joy. The best time to do it is between March and June in order to see the landscape at its glorious best. There's something different to see around every corner, including ancient ruins of long-gone and mysterious civilisations.

The road winds beside steep cliffs and past hidden beaches, then the view opens out in glorious technicolour to display an entire stretch of the magnificent coastline. You can bathe, snorkel or dive in secluded coves and discover all the wealth of flora and fauna that Sardinia has to offer. 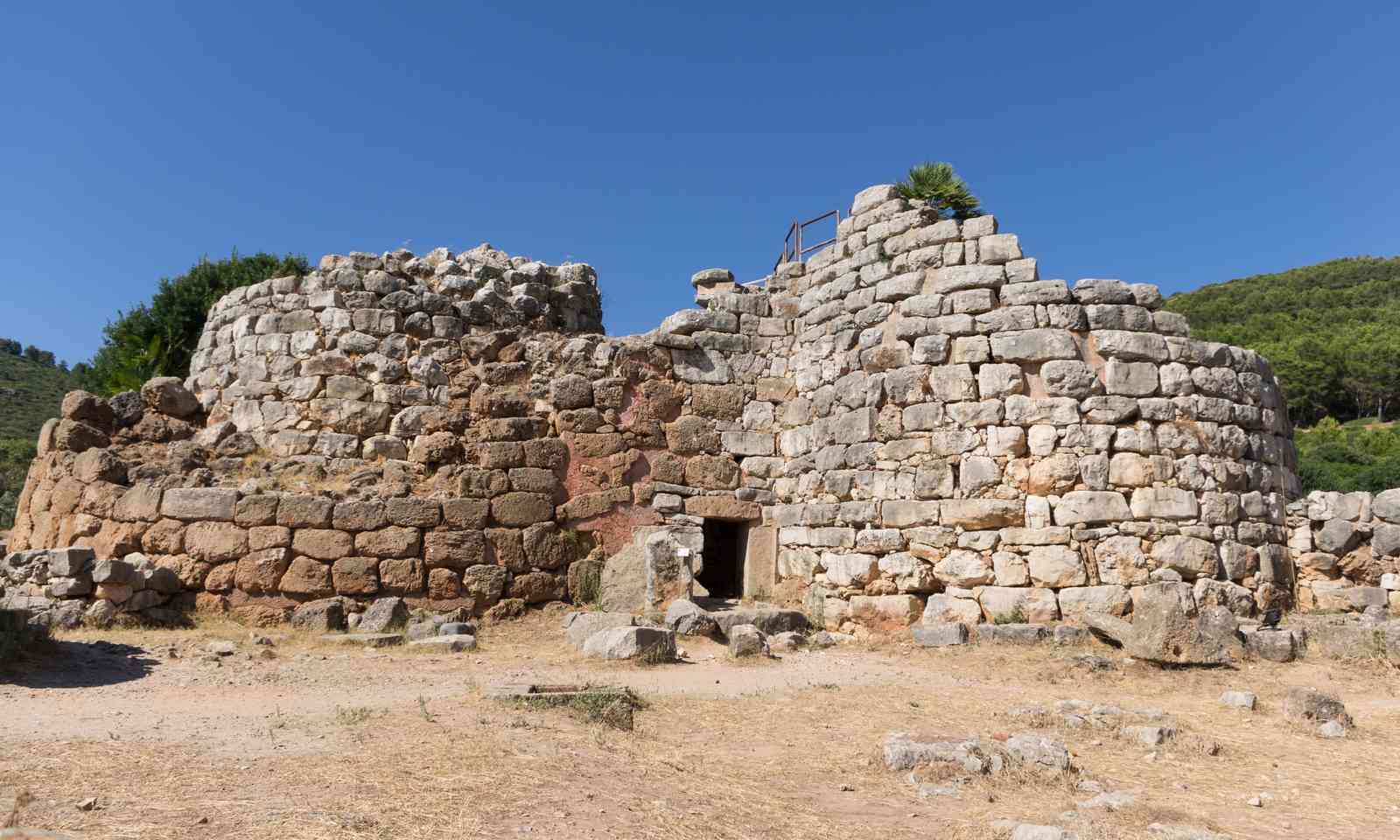 The nuraghe in Palmavera (Dreamstime)

Discover more about those mysterious civilisations by visiting one of the nuraghi (ancient sites), such as Palmavera Nuraghe, a prehistoric complex containing two towers and a courtyard, in Fertilia, Western Sardinia. Little is known about this secret civilisation but there are over seven thousand nuraghi in Sardinia and their distinctive truncated cones are a familiar part of the landscape.

The civilisation is thought to have lived on the island from 1800 to 500 BC, and although there is no trace of any written language, many bronze figures and other significant objects have been found in the tombs and near the holy wells. 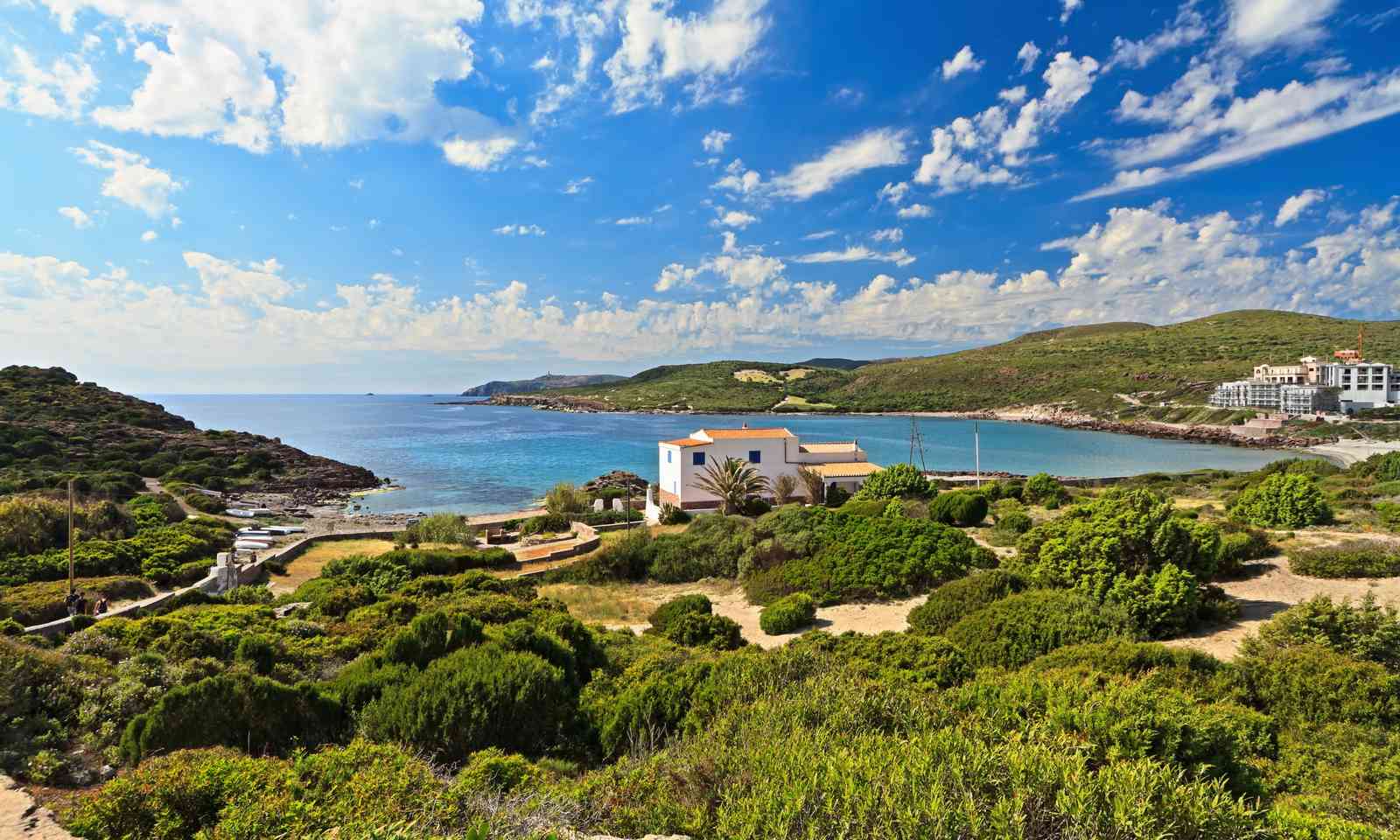 If you’re searching for a secret beach, visit Cala Domestica on the western coast, a cove overlooked by a solitary Spanish tower. Take the boardwalk past deserted mining buildings over the dunes to the beach. Its fine white sand is peppered with bright mineral specks and the water is blue and translucent.

Don’t put your towel down just yet, though. Look for the path around the rocky promontory. Little more than a goat track, it leads to a magical arch of rock beyond which is the keyhole bay known as Caletta, invisible from both the sea and Domestica, lying at the mouth of a river, amidst myrtle and juniper-scented maquis. 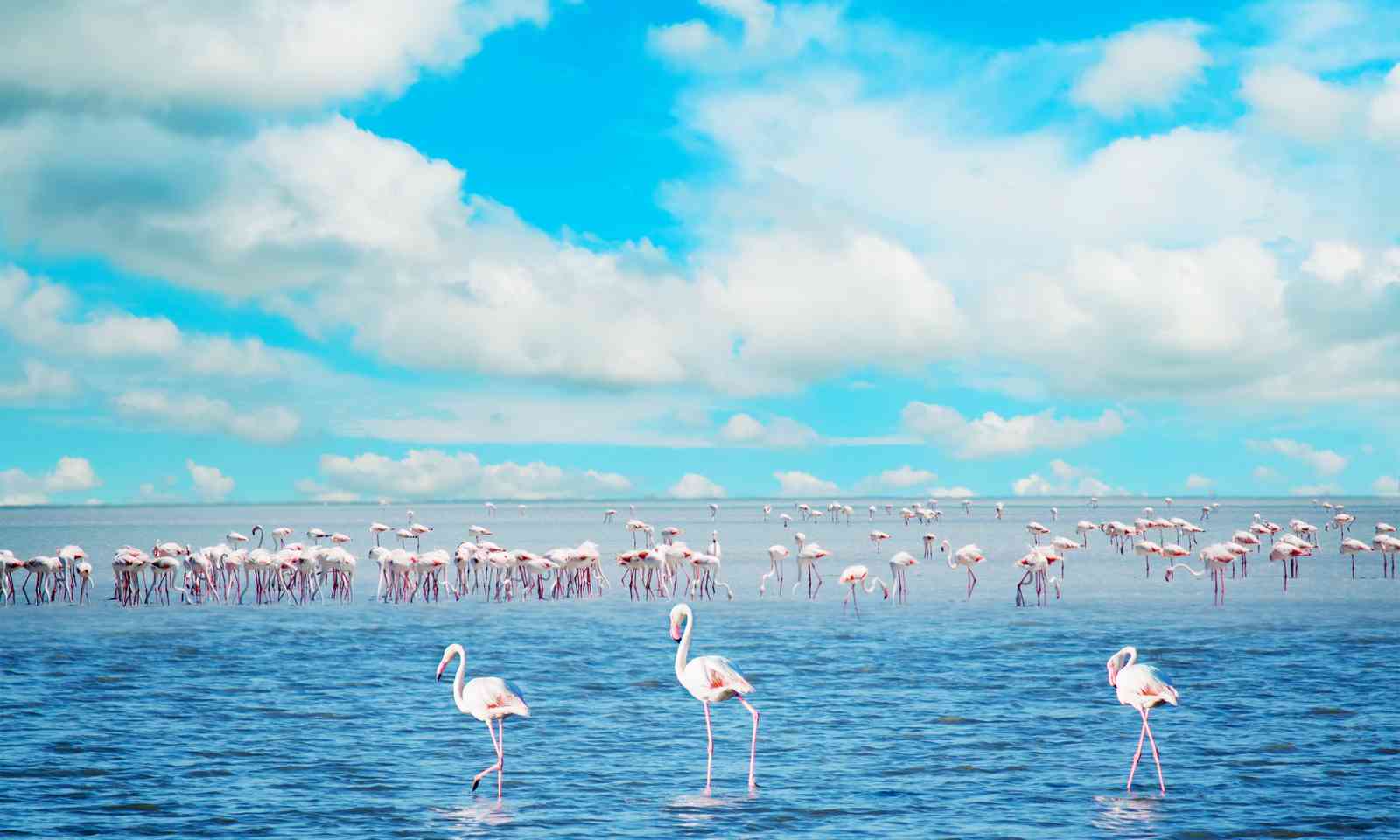 Oristano is an elegant city with a stunning baroque cathedral and interesting streets to wander. The city is also a good base for visiting Is Arutas beach and the Roman site of Tharros. Oristano’s best kept secret, though, is the flamingos that populate the fertile plain around the city, drawn no doubt by the network of pools well-stocked with food.

Drive around the SP49 and be prepared to park, jump out of your car and get closer for a decent picture. You can also see flamingos en masse in the Sale Porcus marsh reserve but seeing these elegant birds in the industrial area outside a city has an unexpected and special impact of its own.

5: The Poetry of Posada 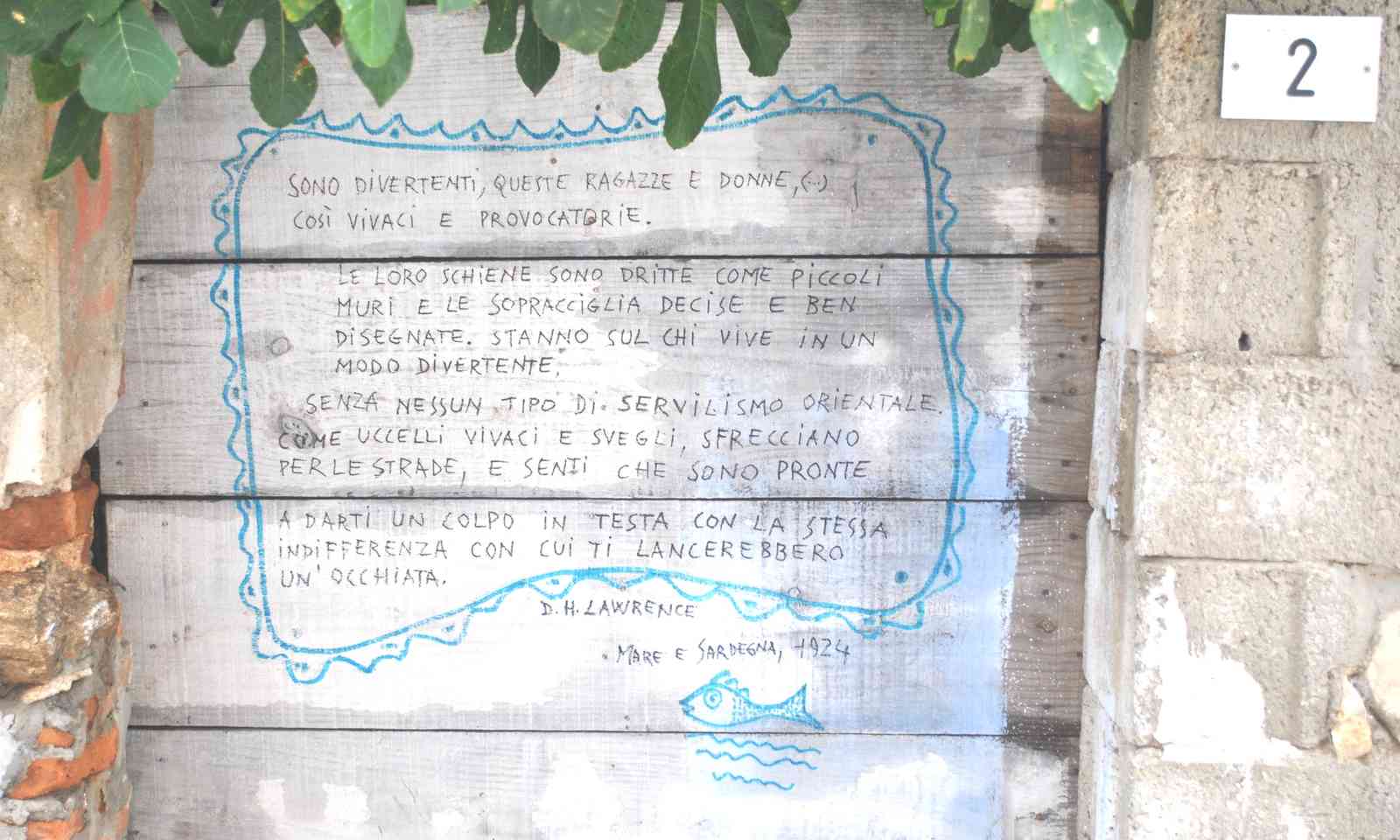 Poem on a wall in Posada (Rosanna Ley)

Posada is a mediaeval hilltop village perched on a limestone bank of euphorbia,dominated by the ruins of its twelfth century castle. Its winding alleyways are connected by steep staircases, crumbling arches and tiny piazzas which open out into terraces with panoramic views of the sea, the river and the surrounding fruit orchards.

But the secret of Posada is its poetry. Poets used to recite their work in the cafés and squares, and the legacy of this custom can be seen in the lines of poetry by DH Lawrence, among others, scrawled on the ancient walls of the town. This is poetic graffiti of the most inspiring kind.

Rosanna Ley is known for setting each of her novels in exotic locations that she visits and studies before writing. Her latest novel, The Little Theatre by the Sea, was inspired by her travels around Sardinia and can be ordered on Amazon now. Find out more about Rosanna and her bestselling novels at her website.