Is it safe to take children on safari?

We live in a world shackled by health and safety rules, says Family Man, William Gray. But where do you draw the line on a safari with children?

On safari it is generally not a good idea to go poking around in holes. Many are home to harmless creatures, such as mice, gerbils and lizards, but others might harbour less endearing critters like snakes and bees. Even an innocent looking mouse hole may not be all that it seems. Shine a torch down one and you may find eight eyes staring back.

What you may not realise is that all eight eyes belong to one, large hairy spider. Check out the sides of the hole and the presence of a silk lining should confirm that you’ve found the lair of a baboon spider – common in dry grassland across much of East and southern Africa.

Why then, you might ask, did I not so much as blink when our Maasai guide suggested ‘a baboon spider fishing expedition’ to my ten-year-old children on a recent safari in Kenya’s Amboseli National Park? Can you imagine that sort of thing happening on a school trip in the UK? Even if you swapped woodlice for large hairy spiders, you wouldn’t get out of the door before tripping up on health and safety red tape. Is there a correct ratio between adult supervisors and children? Are all adults CRB checked? Is the ground going to be too muddy or steep? What if someone pinches their fingers rolling over a log looking for minibeasts? How will the children wash their hands afterwards?

I’m not for one minute suggesting that we shouldn’t protect children, but there are times when health and safety should be nudged to one side in favour of some good old-fashioned, inquisitive exploration. And fishing for baboon spiders is one of them. 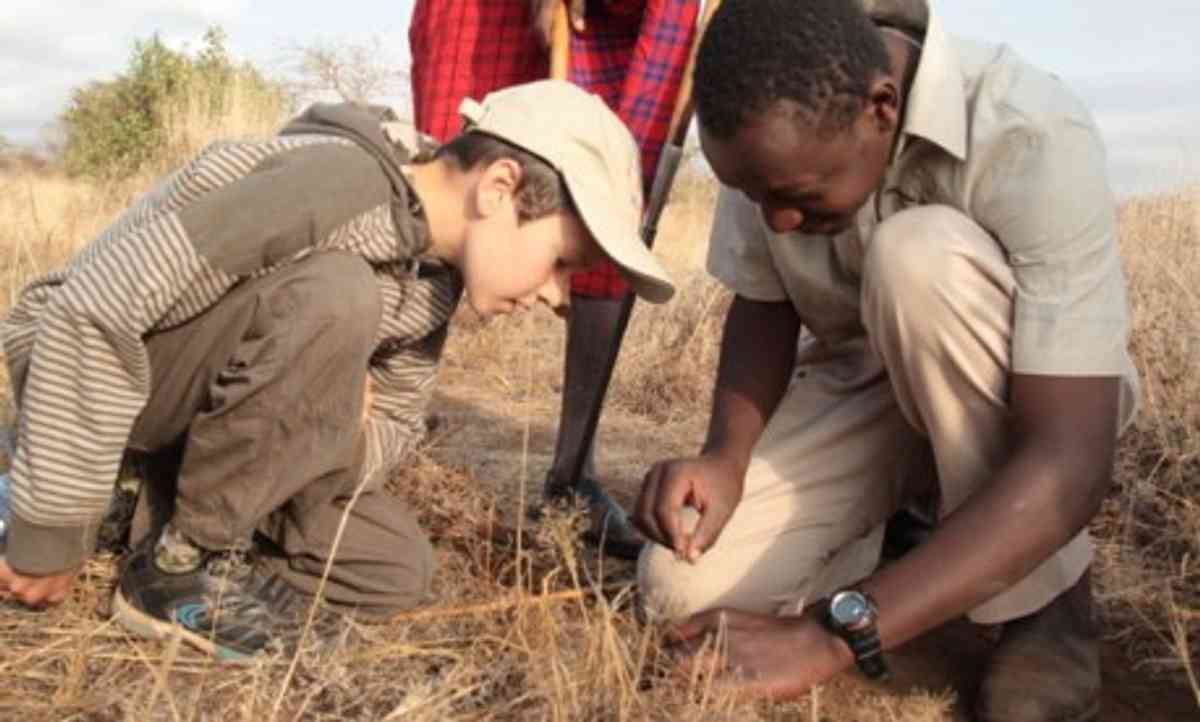 They counted all eight eyes

Our Maasai guide handed Joe and Ellie a long grass stem each and showed them how to tempt the arachnid out by singing to it while gently scratching around the entrance to its burrow, imitating the patter of passing prey, such as grasshoppers and beetles. Sure enough, after a minute or two this elicited the spider’s ambush response, luring the palm-sized tarantula into the open. The twins counted all eight eyes – two large ones facing forwards, four small ones in a row below them and another two on the sides of the spider’s domed head. They noted, too, the enormous orange fangs – more than capable of seizing prey and dragging it down that old mouse burrow. They were absolutely riveted; they’d made their own mini-discovery; they'd marvelled at the incredible camouflage of the spider and learnt an old Maasai trick in the process. Moreover, they’d gained, through experience, some fresh respect for harmless looking holes.

Later my wife and I berated ourselves for being irresponsible; for allowing our children to take such an unnecessary risk – just as we had done in Namibia a few years earlier when Joe and Ellie spent a happy hour climbing high in a giant baobab, or more recently when we took them coasteering in Pembrokeshire and watched them leap from cliff ledges 20ft into the sea.

No harm done though

The point is that family travel should be liberating. It should be spiced with excitement and tingle with new discoveries and achievements. And the way to do that safely and responsibly is to book through a reputable operator where the quality of guides is paramount. After all, you wouldn't let your children go coasteering without an expert in charge. And nor would you let them go fishing for baboon spiders without a Maasai warrior who knew exactly what length of grass stem was required...