Robert Macfarlane interview: “When I'm writing a book, I have no idea where I'll end up”

As revered British nature and travel writer Robert Macfarlane releases his latest book Landmarks, we caught up with him to talk about 'rewilding' our language

Tell us about Landmarks...

It’s a different kind of book, this one. Its territory is language. That’s the landscape it explores.

In the book, you talk of words being lost – is this happening all over the world?

Language death is happening at a massive rate all round the world. It’s a version of diversity loss in all sorts of other ways, whether that be loss of biodiversity or landscape loss (eco-diversity). As the world globalises and homogenises we’re losing diversity. This is one of the ways in which I think we could say it’s happening.

I love your idea of a ‘word hoard’. Would you encourage readers of Wanderlust to start collecting unusual words?

I’d love that. You’ve probably seen that I’ve left several pages, the last glossary, blank almost as a notebook in which people can write their own words. In fact I’m extending an invitation, which I’d love to extend to Wanderlust readers too, for people to send me wonderful landscape language by postcard.

Even since I closed the glossaries, because I had to finish the book, hundreds more words have reached me from all sorts of directions and they’re still coming. If you want to send me words from around the UK, from any language or dialect, you can send a postcard to me at Emmanuel College, Cambridge, CB2 3AP.

I’d love to add them to the word hoard as it grows, because it’s not a completable thing. We’re always making new words and losing old ones. But I do think, generally, we are making do with a less rich language for our landscapes and I regret that. Sometimes when you travel you ask someone for a literal translation to describe something and there isn’t one. I love the idea that sometimes things are untranslatable.

It’s not like there’s a dream language out there in which we would all speak beautifully. I think in a way I have no idea what these words will do and that’s the wonder of them, that’s the adventure of them.

The words make you see the world differently. I guess the book is partly a series of journeys to the places and the people who have kept these words. The word-makers and word-lovers and word-users, whether that be Nan [Shepherd] in the Cairngorms or Roger Deakin in Suffolk. They’re examples of how when language is used richly and inspirationally; it really can change the way we see the world and change the way we behave.

Before you travel to a place do you read up on it as much as you can, or do you go first and read up on it afterwards so you can compare that to what you saw?

There’s a Wallace Stevens poem just called The Poem That Took The Place Of A Mountain and sometimes if you read too much before you go somewhere it can be like the poem has taken the place of the mountain. You can’t see past the language to the place itself.

I think there is a danger of over-researching, but equally people can turn up at places so ignorant as to be almost blind and that’s a danger too. I’ve always loved travelling with a local guide. In The Old Ways I sailed a lot of the North Atlantic seas with Ian Stephen, an amazing story teller and sailor who knew those waters incredibly well. That’s when I feel very fortunate, when I’m seeing through the eyes of somebody who knows a place brilliantly.

Our late co-founder Paul Morrison always said that a good guide could make a place come alive for you.

Exactly, and sometimes those guides are people you pay and sometimes they’re people you meet and friends you make and that sense of a landscape springing into subtlety and energy is exactly what an amazing companion can do. Take the Antarctic. In a way that’s the least legible of all places, it’s just a great white sheet – they call it the crystal continent. Yet that place which is the whitest and least legible of all our landscapes has had almost the most written about it.

I’m writing an article about Antarctica at the moment (Wanderlust April 2015, issue 155) and I’m struggling because there’s just so much to say and at the same time there’s nothing I can really say to do it any sort of justice.

That’s it and I’m very aware that there’s a gap that experience falls down, there’s a gap between language and landscape that will always be there and, in a way, much of our response to a place disappears down that very slender abyss. But equally, I'm fascinated by this incredible human impulse to name and love and celebrate and cherish aspects of landscapes – and that’s what this language and the language of Antarctica registers. 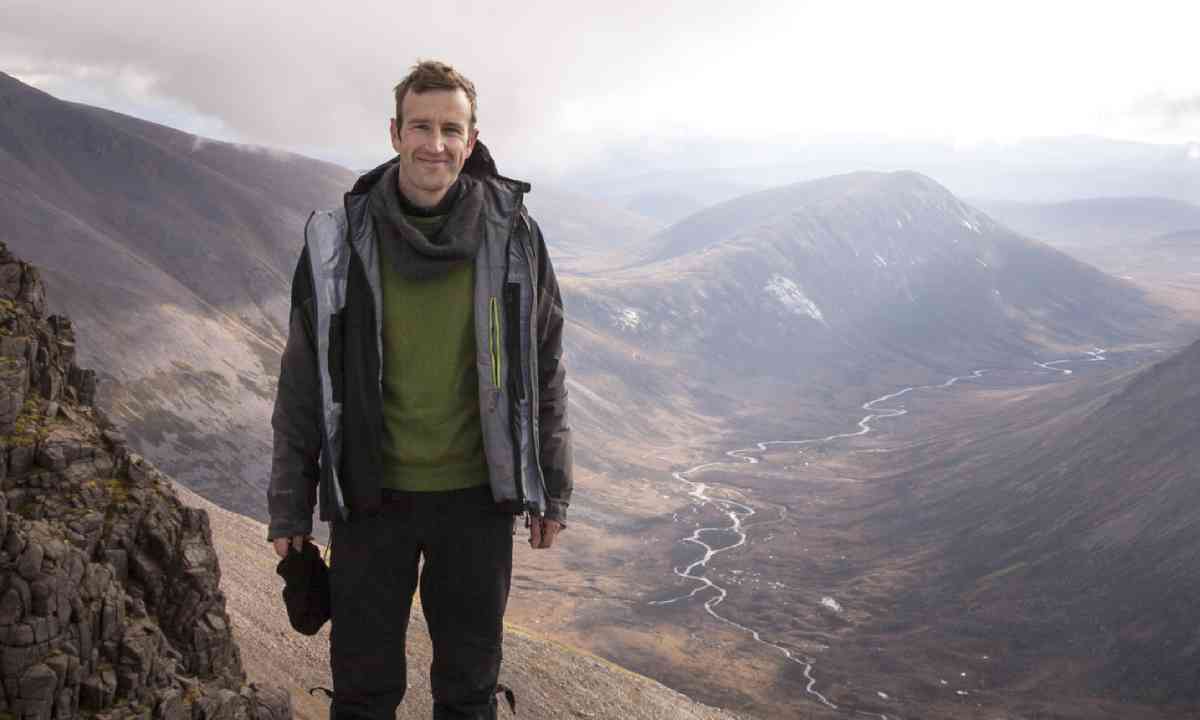 How do you not fall into the trap of writing clichés?

When I read Nan Shepard, it just absolutely changed the way I understood and perceived the Cairngorms, which was a mountain landscape I thought I knew really well. I would give J.A. Baker's The Peregrine to anyone who wants to avoid cliché in writing about landscape. Read two or three pages of this book and you'll see how the farmed and developed landscape of south east England can become as wild and weird as the Antarctic, in the language of a stylist like Baker. To me, reading books like that is a kind of drastic exhilaration because familiar places become utterly exotic again.

You've said that each hour spent reading is an hour spent becoming a better writer. We always say to be a good writer you've got to be a good reader and so many people say ‘I don't have time’, but you have to make the time.

Yes, and reading is a form of journey and travel and exploration itself. As we all know, you can cross continents without moving from your armchair. But yes, I think for two reasons, partly because it teaches you cliché, it teaches you the ordinary and the predictable and the other is that it teaches you astonishment.

Are there travel writers that influence you?

Ah, yes. The whole of classical Chinese poetry about rivers and mountains is a constant source of amazing inspiration to me, realising that the adoration of landscape goes back thousands of years. More recognisably, Patrick Leigh Fermor; and the North American writer Barry Lopez, who wrote Arctic Dreams, which is a pure masterpiece of politics, language, lyricism, culture and nature.

I always mention Nan and Baker, but I've talked about them. Also an Irish writer called Tim Robinson, who’s spent his life mapping and exploring the western islands.

Do you prefer re-seeing your homeland or going to completely new places?

Both are incredible. The book I'm very slowly writing at the moment is about underworlds and undergrounds, and that is taking me to some of the most extraordinary and memorable spaces I've ever been: down at the shores of the starless River Timava, 1000 feet under the ground in Slovenia and north east Italy, near Trieste; and into the catacombs of Paris and Prague.

I'm staring to see cities and worlds from underneath and to write about cities, which I've never really done before. I feel very excited about that at the moment.

You made a BBC film, Wild places of Essex – do you like to go to places that are stereotyped in one way and try to see them in another?

I guess so. You don't get much more stereotyped than Essex, I have to say. In a way it was an obvious target. It's very touching to me how that film lives on in peoples' memories and for some reason it's really stuck a chord.

In some sense I just let the landscape lead me. The most thrilling things are encounters while travelling that lead to other encounters and new destinations. When I was walking thousands of miles for The Old Ways I didn't know which way the path would lead or which turn I would take. It would just come about according to the people I met and the conversations I had and the letters I received, which you can either take to mean random chaos or exciting accidents!

When you're writing a book, do you know where you're going when you start? How does it work for you?

I just know what area of territory, whether that is intellectual or actual, I want to explore. I knew I wanted to write a book about walking and that led its own route, and I know that I will now probably take a decade writing a book about the whole idea of underworlds as a territory of dreams and nightmares and darkness and discovery and I have no idea where I'll end up, only that that's the realm I want to visit.

I also saw that you're writing a screenplay for a feature film about polar bears in the Canadian arctic.

Yes that's right. I’m working with Andrew Graham-Brown who directed The Wild Places of Essex and he's been spending a long period of time up in the southern Beaufort Sea, on the north slope up there where the whole landscape is defined by oil and ice. It's a film about oil and ice really and it's very exciting to be working on a script which allows me to write about these things.

Any idea when that will be out?

No. We've got a long way to go before release and in the meantime I'm finishing a six-minute film shot entirely on Super 8 [film], an adaptation of a little book I co-wrote called Holloway.

You've also been a judge on the Man Booker Prize and also a chair, recently. How difficult is it to judge someone else on their writing?

The difficulty is reading 150 novels in 200 days – secondary to that, actually making your mind up is quite easy! I'm a fellow at Cambridge so I spend my whole day discussing books and judging books. We all like discussing what we love.

There are lots of words in Landmarks from similar areas. Were there some places more than others that seem to have spawned colloquialisms?

Scots is very rich, Gaelic is very rich. As I say at the end, to a degree it reflects my own personal story, my own biographical and family connections to Scotland and to the islands and the highlands. I wish I'd been able to find more Welsh, more Irish.

Then there's this category of languages and language use which is there in recently-arrived languages, in languages of contemporary migration. I had some fascinating conversations with Bengali and Hindi speakers who were going out into the Peak District and beginning to wrap fabulous Indian myths and stories around the landscape there. That just seemed wonderful to me.

Language is always in a constant state of flux. Obviously we should mourn the loss of some of these words, but should we be also be embracing change?

I began the book feeling quite anxious about this loss, the loss of this language, and I remain so, because I do think that we make do with an impoverished vocabulary for landscape.

But the book goes from a kind of lost shadow language all the way through to two very hopeful endings: these children making up wonderful stories, and this amazing revelation that there was this incredible scholar working in 150 languages to create a 15,000 page book. It's absolutely crazy, the learning and vision... Language is being made and saved and created as well as lost.