It’s been 80 years since the completion of Vietnam’s north-south railway, but the journey from Hanoi to Ho Chi Minh has become much more than a train ride

6 mins
Checking her watch, Tinh let out the softest of sighs. Almost instinctively, she pushed back on her low stool, its plastic legs scrapping against the tiled floor just as the whole house started to shake.

Tinh didn’t seem fazed by this. She merely continued to chop vegetables and prod the plump spring rolls that sizzled in a vat of oil beside her as the locomotive came into view; its red, white and blue carriages passing in a noisy blur almost close enough to touch. Having lived just yards from this line all her life, she’s well used to the comings and goings of the Reunification Express.

Next year marks the 80th anniversary of the completion of Vietnam’s historic north-to-south railway. However, it hasn’t been an easy ride since. Conflict in the decades that followed saw it bombed, destroyed and largely abandoned. 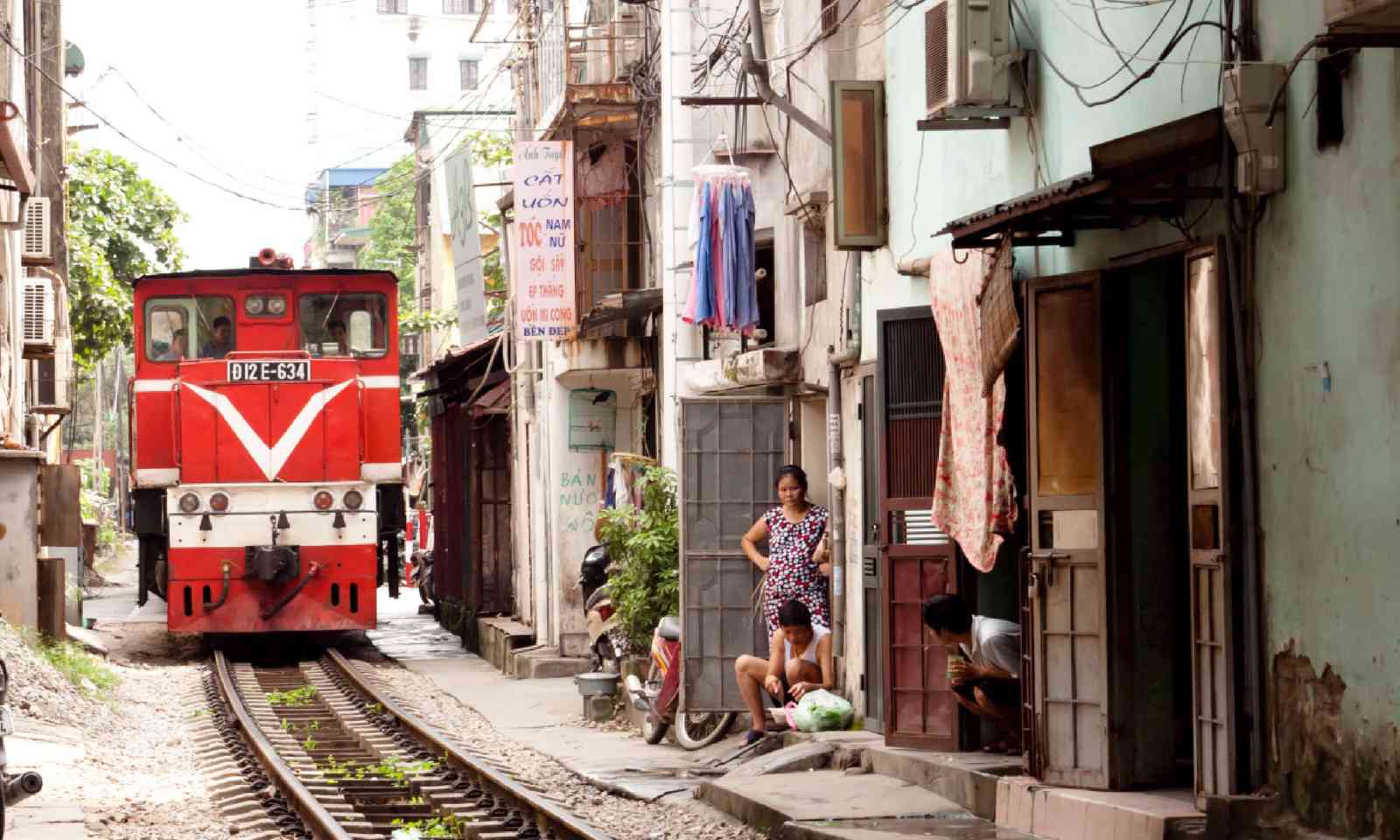 Outside Tinh’s modest home, the air throbbed as the last carriage swept past on its final approach into Hanoi’s central station, marking the very end of its 1,726km journey north from Saigon.

It may be one of the world’s great rail rides, steeped in history and cutting through some of Asia’s most pleasing landscapes, but Tinh didn’t entertain any such romantic notions: “It’s a hard life living by the railway. I worry about my pet cat. My last one was killed by a train.” She glanced towards the black and white feline dozing in a cage nearby.

Phoenix from the ashes

For travellers, the Reunification Express is an adventure; for much of the Vietnamese population it symbolises the sacrifices of a nation. Heavily bombed during the Vietnam War, this single track – laid by the French between 1899 and 1936 – became a key target for American planes seeking to disrupt the transportation of weapons and supplies across the country.

From 1954 it became impossible to travel from one end to the other as a landmine-dotted demilitarised zone was established near Hue, separating the two territories of North and South Vietnam.

My journey was to take me from south to north, starting in Saigon (now officially Ho Chi Minh City) and ending several days later in the charming capital Hanoi. Once upon a time, this journey would’ve taken over 60 hours. Today, you can do it in just 36 – but what’s the rush?

In a deserted train yard outside Saigon I met Mr Ngoc, a man who’s dedicated 55 years of his life to Vietnam’s most romantic mode of transport. Mr Ngoc has loved trains since he was a boy growing up in the Central Highlands: “I’d jump on without a ticket and ride them all day until an inspector threw me off .” In later life, he was a key player in the rebuilding of the railway system in newly reunified Vietnam. 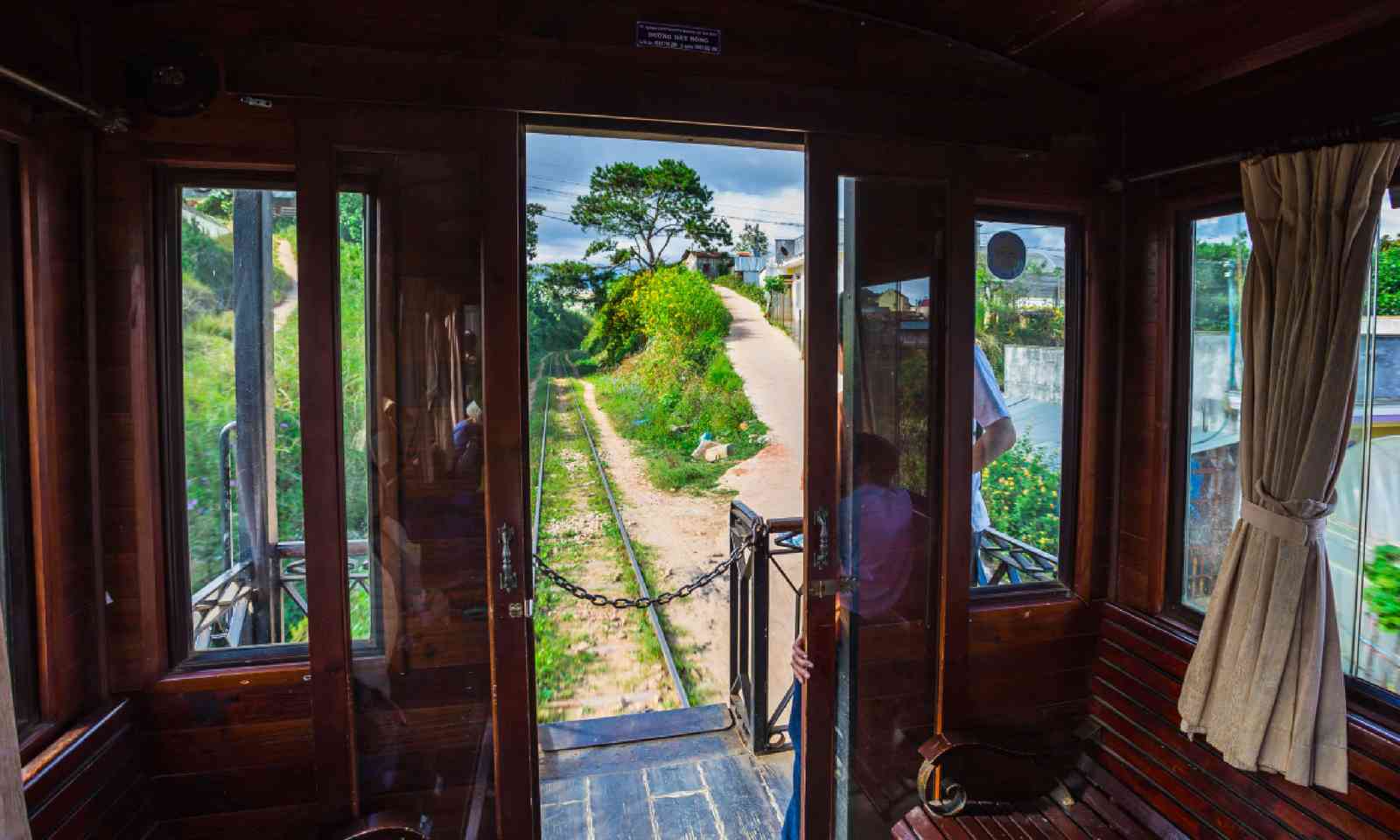 “Getting the railway working after the war was a big priority for the government and in many ways it was symbolic,” he told me as we walked between old steam engines in need of a little TLC. “We faced huge challenges.”

The remote, mountainous north presented an obvious set of obstacles but there were problems across the route. Many of the 1,334 bridges and 27 tunnels had to be rebuilt and repaired with little technology and few materials. Despite the setbacks, the newly nicknamed Reunification Express made its first post-war journey just 20 months after the final bullet was fired, departing from Hanoi on 31 December 1976.

My own rail adventure began with a snooze. The rocking of the train and the sight of Saigon’s suburbs swirling beyond the window had lured me into slumber. I woke to scenes of peaceful paddy fields bordered by tiny villages and cemeteries with white tombstones barely visible through the tangled vines.

Then the views got even better: forested peaks studded with grey boulders, many cracked down the middle like walnuts smashed by giants.

My first stop was Thap Cham. From here, a two and a half hour drive along winding mountain roads transported me to the lakeside retreat of Dalat, where well-heeled French folk set up luxurious holiday homes during the colonial days.

Mainline services haven’t reached Dalat since 1972, so its small mustard-yellow station with stained glass windows and worn leather armchairs in the waiting room has seen busier days. Now, Platform 1 is permanently occupied by an old Japanese steam engine and a carriage converted into a café, which is hung with black-and-white photographs of the station in its heyday.

Yet this dusty 1930s terminus still welcomes a modest number of passengers keen to ride on the Dalat Plateau Railroad to Trai Mat, just 7km away. Overseeing the second of five departures that day was train conductor of 13 years, Dung. A whistle hung around his neck and he clutched red and yellow flags as train enthusiasts posed for photos beside him.

The toy train eventually materialised: three vintage wooden carriages pulled by a handsome green and yellow diesel locomotive. I boarded, and it lurched into motion, picking up speed as it powered through narrow channels flanked by houses where families ate bowls of pho (noodle soup). These gave way to ramshackle farms where large greenhouses nurtured a bounty of flowers and vegetables until, all too soon, it jolted to a halt at Thap Cham, famed for its ornate Chinese pagoda. 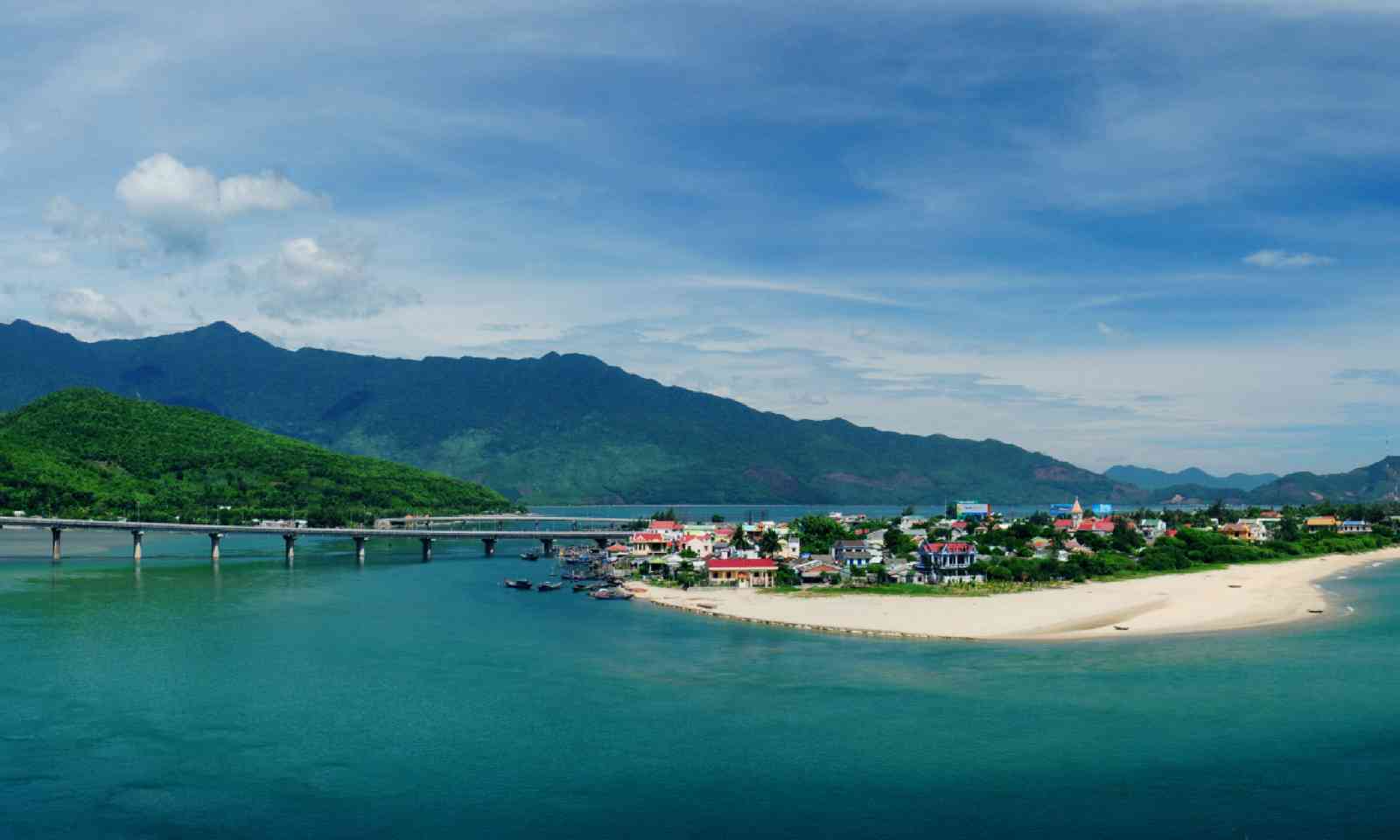 That afternoon, I reverted back to the Reunification Express travelling north from Nha Trang to Danang. The 4.29pm service departed on time and by 4.34pm I had become firm friends with the elderly Vietnamese couple sharing my four-bed cabin. Holding hands and wearing matching cotton pyjamas, they were returning home to Hue – the country’s ancient capital – having visited family in Saigon. They sat closely together, sharing one of the bottom bunks and later falling asleep in each other’s arms just like the old couple in Titanic.

For many others, however, the nine-hour journey to Danang didn’t pass in quite the same level of comfort. The train’s second-class carriages were crammed with weary-looking passengers sitting on uncomfortable wooden seats. With no dining car on board, dinner was fried chicken, boiled cabbage and steamed rice (surprisingly tasty) served by an old lady from a squeaking trolley.

The coastal city of Danang, famed for its beachfront, is not central Vietnam’s most alluring address – that honour goes to Hue or Hoi An – but it was the country’s most important port in the 19th century. Today, it offers a glimpse of modern Vietnam: high-rise hotels, jet skis and parasailing holidaymakers skimming the sky.

But it also remains true to its roots. Watching over the scene from the edge of Monkey Mountain is Lady Buddha. Like an oversized candlestick balancing on the green hillside, she is Vietnam’s answer to Christ the Redeemer, a 72m-tall white statue gazing across the peninsula, giving comfort to countless locals who believe she offers protection against typhoons.

Down at sea level, large bamboo fishing baskets were scattered along the wide sandy shore, close to where a dozen people were hauling in a large net. They stood in the murky shallows, heaving with all their might and revealing dozens of flapping metallic fish with each tug.

To the south-west stood the Marble Mountains, five hill-sized limestone formations, each named after a natural element – fire, water, earth, wood and gold – which have been considered sacred for centuries. I climbed the steep stairs on Thuy (Water) Son, the largest of the five, to explore its pagodas and caves, originally used as a place of worship for Hindus before the Buddhists moved in. 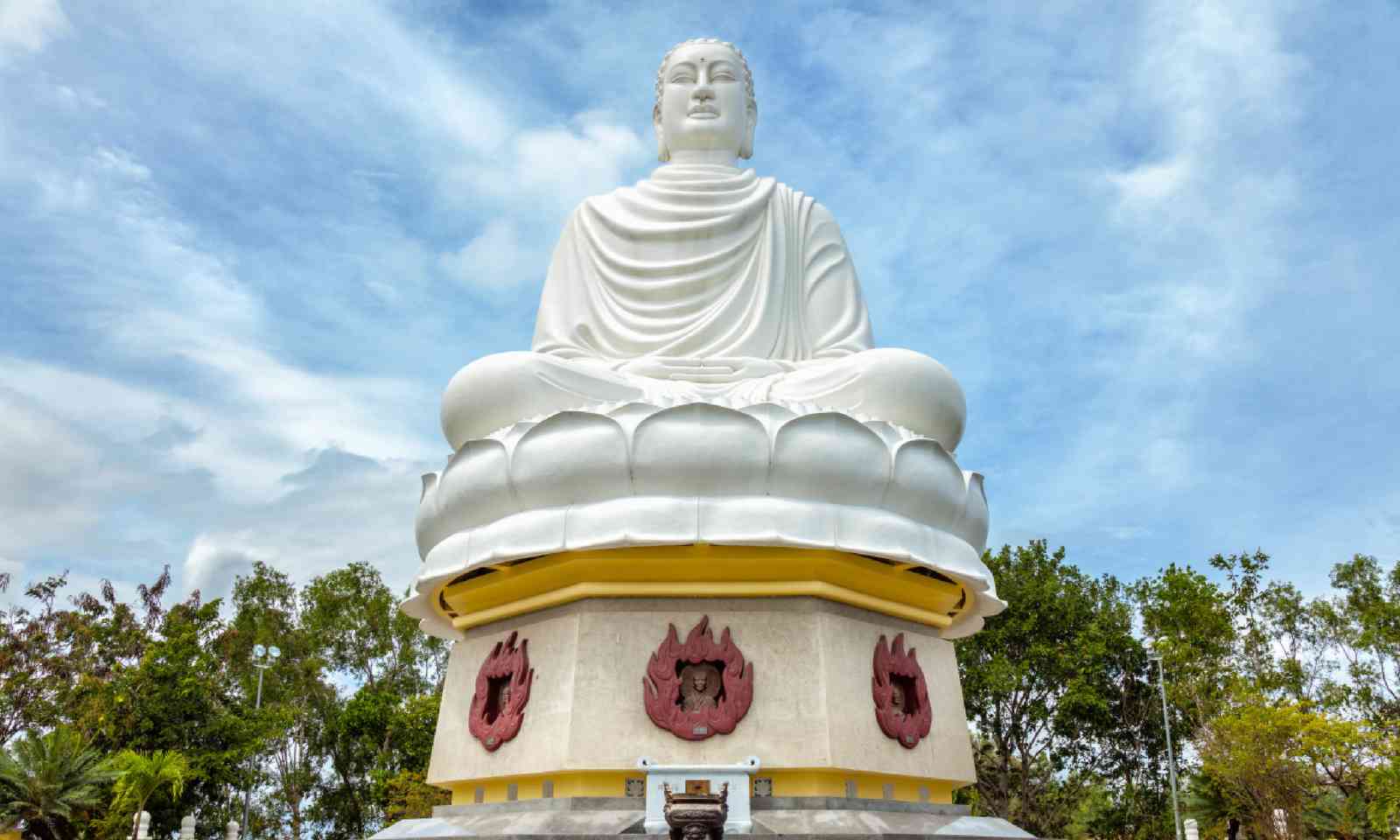 Stationed outside the Linh Ong Pagoda, just beyond the bullet-studded Ong Chon gate, was Ta. From beneath her conical non la hat, the great grandmother was spending another morning selling incense sticks. I bought some for the princely sum of 20,000 dong (58p) and a large smile spread across her face, revealing a mouthful of inky black teeth. She led me by the hand to pay homage to the Goddess of Mercy.

However, I was more interested to know whether there was a shrine devoted to the patron saint of train travel: I was about to embark on the longest stint of my journey aboard the Reunification Express – the 15-hour trip from Danang to Hanoi.

The wrong sort of rain

Arriving at Danang’s chaotic station, I’d begun to hope for a little divine intervention as news spread of the train’s delay. With every passing minute, the waiting room swelled with more families jostling for seats and backpackers searching for floor space.

The platform was less crowded, so I waited there among the shopkeepers and their tiny stalls. They busied themselves restocking all manner of essentials for the journey ahead: dried fish, boiled eggs, tea towels and commemorative plates featuring the face of Ho Chi Minh.

When the train eventually arrived, people spilled out of the waiting room like an army of ants, scurrying to their luggage-laden carriages. I settled into my cabin, peeled back the faded pink curtains, moved the fake flowers out of the way and, under strict orders from Mr Ngoc, paid close attention to one of the railway’s most spectacular sections.

Stretching for 21km towards Hue, the Hai Van (Sea Cloud) Pass rises to an elevation of almost 500m, slicing through the Truong Son Mountains, a rugged range that separates the Mekong Basin from the South China Sea. 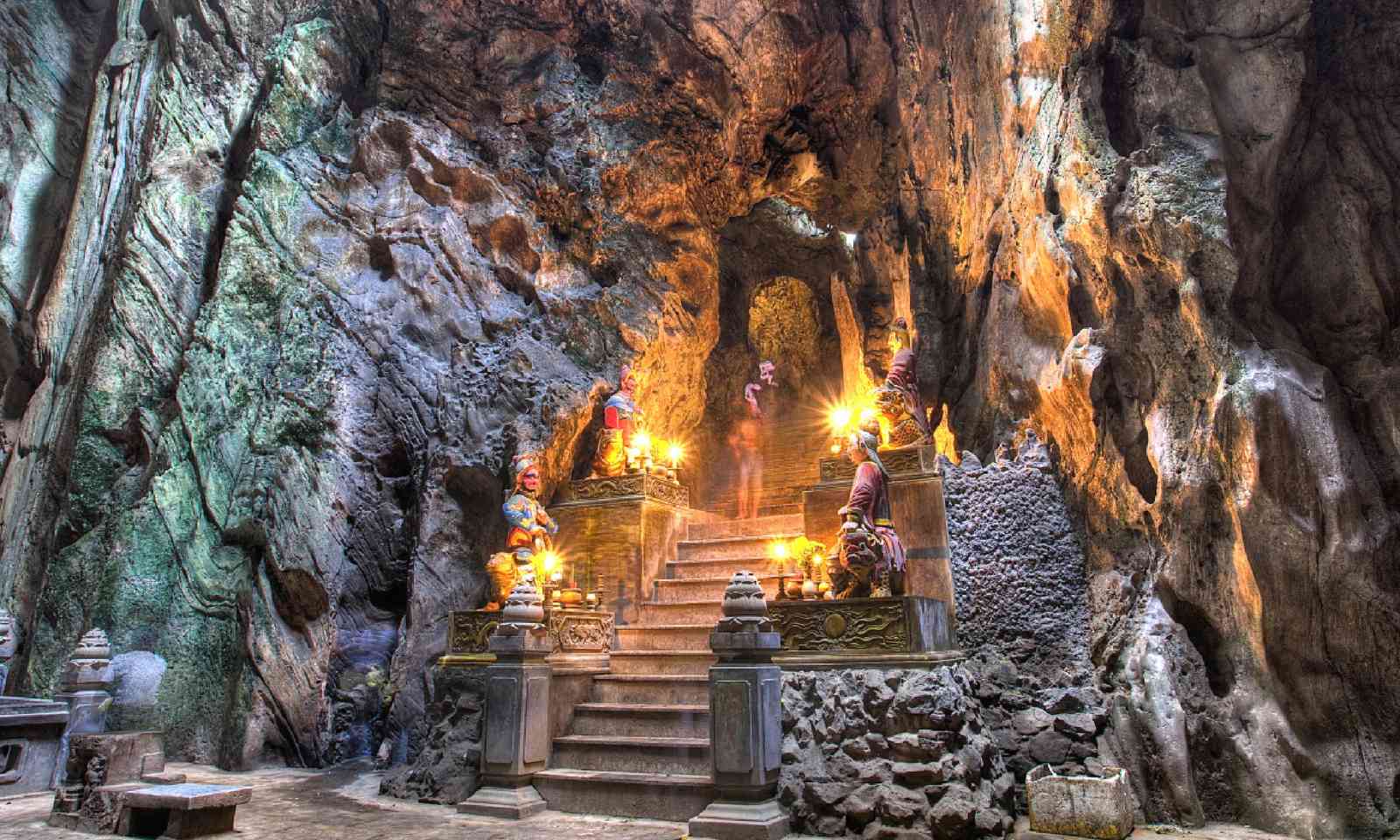 Long stretches of beaches and rocky promontories appeared below while the 21st-century skyline of Danang sat on the horizon. Rain lashed against the windowpane, each heavy droplet causing a large splutter that gave the whole scene a celestial beauty.

A toast to trains

The drizzle continued to fall long after the train arrived into Hanoi. Low clouds hung over the Old Quarter; the downpour settled on the arched scarlet bridge in the middle of Hoan Kiem Lake and slid down the yellow walls of the Opera House.

As night fell, I retreated to Ray Quan, a tiny bar and restaurant with a wine list lifted straight from a Grimm’s fairytale (think rice wine flavoured with starfish, river geckos and silkworms). Like Tinh’s house, the bar is located just yards from the train tracks, near a busy crossing with an endless stream of honking mopeds. Across the tracks was the back of a noodle restaurant, where live chickens clucked loudly until falling abruptly silent at the hands of the street-side chefs.

However, the bikes, chickens and clanging pots and pans were soon drowned out by the rumble of a fast approaching train. Within seconds it was upon us: a thunderous roar, with sparks shooting from the screeching wheels and an amber glow seeping from the sleeping compartments.

As is customary whenever a train rumbles past Ray Quan, I reached for one of the thimble-sized ceramic cups filled with rice wine and raised my glass, to toast the adventure, the ingenuity and the dogged determination of the Reunification Express.

Most trains have four classes: hard seat, soft seat, hard sleeper and soft sleeper. Given the lengthy journeys and cheap cost, opt for the soft sleeper. Bottom bunks tend to be cheaper than top bunks. Expect to pay around VND1,077,000 (£31) for a one-way ticket from Danang to Hanoi.

Reservations are essential – book at travel agencies in major cities or at stations in advance. Pack a fleece (the air con is often cranked up), a pair of slippers (for night-time toilet stops), tissues and earplugs. Also take a stash of snacks – sharing is a great way to break the ice with fellow passengers.