Perfect for exploring in the UK's glorious summer weather… Chris Orange from the Remote Britain project tells us why we should visit Britain’s remote locations, and his 5 favourite remote beauty spots

What’s the idea behind your Remote Britain project?

I set up Remote Britain to encourage adventure. I’m a commercial photographer and I travel to a lot of parts of Britain on commissions. In the process of doing that, I realised that the areas I was travelling to were not only the most beautiful parts of Britain, but also the least travelled to by tourists.

The areas often rely heavily on tourism. So I began to think how we could inspire and encourage people to go a little bit further than the usual places they go to.

If you want a bit of adventure that feels like you’re on the edge, that’s what remote Britain gives you.

What kind of gear do you use for the project?

In terms of camera gear, I use a Canon 5DSR and also the Canon 5D Mark III, loads of lenses, and we use GoPros as well. Loads of lenses.

We’re just getting ‘droned up’ now. I’m waiting for a Mavic Pro to arrive, the new DJI one, the most intelligent drone ever. Apparently, it makes flying a drone a lot safer, because they can’t crash.

And all my gear is Rohan gear, from my bags to the jackets. In the winter, I love the Tundra jacket. I use the Elite overjacket and the over trousers, too. I use their baselayers. On the Isle of Lewis recently, we went from beautiful beaches to the side of a cliff, and we went through snow, sunshine, sleet. When you’re out there for hours, your gear really does show up for what it is. My team got soaked and I was the only one who was dry and warm all the time. 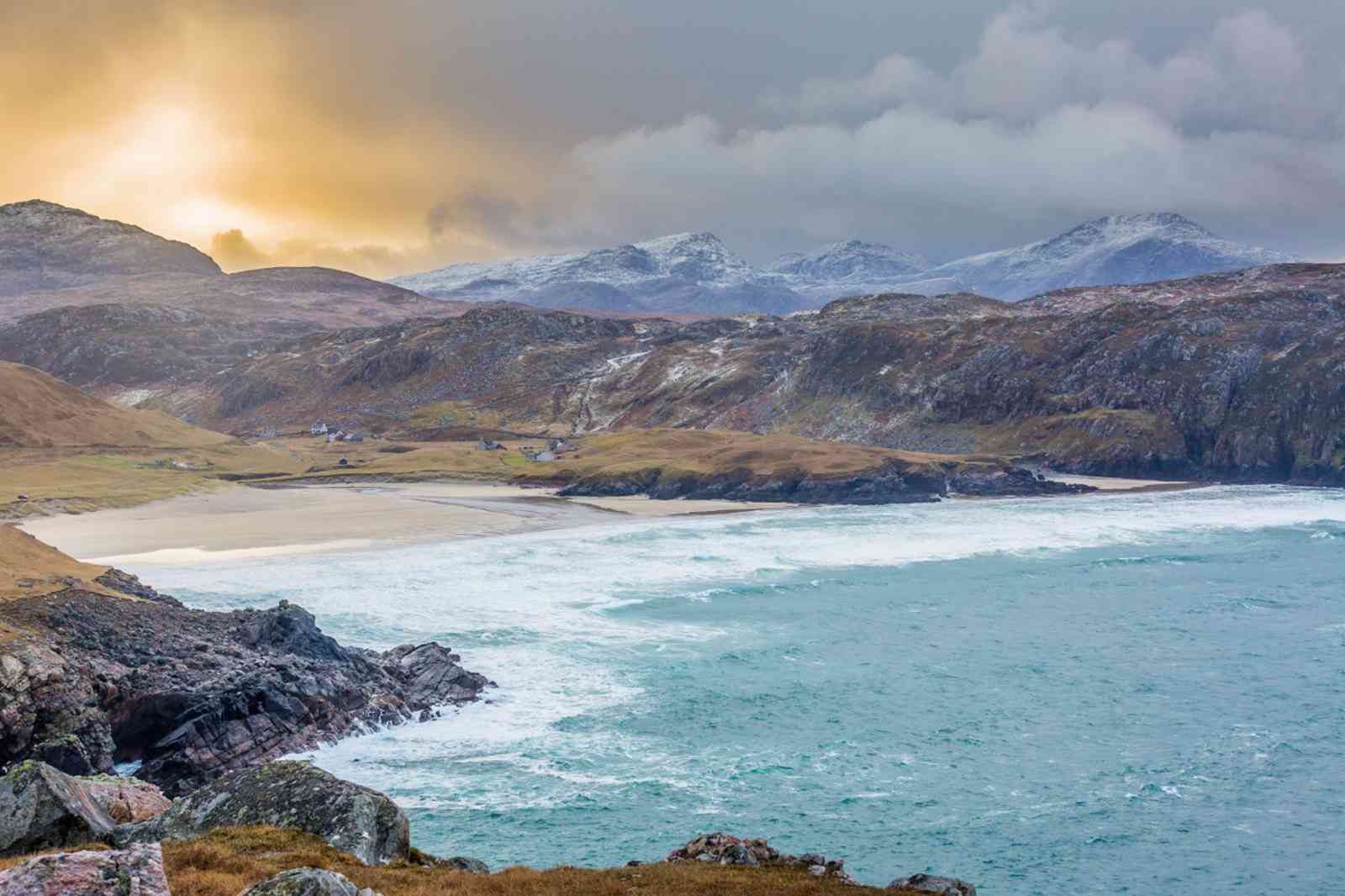 I love the Isle of Harris & Lewis’s diversity. As a photographer, looking for a mix, it’s all there. As you travel around those islands, you go from turqouise seas and white sands, then mountains and incredible farmland. and all weathers every hour. For adventure, it’s brilliant. You’re walking through incredible scenery

With diverse weather, it puts some people off. But for other people, like me, it’s great, because suddenly you’re getting rainbows, or huge clouds, or the rain front coming in off the ocean, or you’re getting lovely sunshine. That inspires me, because it’s giving you a different view all the time. You can do one walk and have a whole year’s worth of views.

My favourite spot is Cliff beach on the Isle of Lewis, or Camas na Clibhe in Gaelic. I love that beach because when we pulled up onto it, it was absolutely hammering down with rain. You could see what would be the most beautiful sea and beach, and in a matter of minutes, it was just incredible hot with bright sunshine.

We walked along the cliff edge all the way to a peninsular in what turned out to be snow. The view from the top is out of this world. You can see loads of surrounding islands in one direction, but looking back towards the beach, you can see snow-covered peaks, and the sun was setting behind them. It was like being in a kind of Heaven. View of the Irish Sea and Bardsey (Chris Orange)

Bardsey Island is off the Welsh coast and to get there you have to go to North Wales, past Snowden and down a peninsular. It’s one of those places that not many people have heard of, and that’s the reason why we were drawn to it.

It’s an amazing island and a real sanctuary for migrating birds. They have everything: puffins, terns... On the boat on the way to the island, we saw porpoises, and there are sometimes dolphins in that stretch of water.

It’s only a couple of miles out to sea, half an hour in a boat, but it feels extremely wild. It has just a handful of inhabitants living on the island.

We were drawn to it because not many people can live there. It’s run by a trust. There are lots of projects to generate income, including people going there. They’ve struggled to make it work financially. There’s one little place that does tea and coffee, and obviously taking the ferry out provides an income for someone.

It’s a beautiful island with incredible views back down the Welsh coast. The Farne Islands and Northumberland all come together for me. Northumberland is a magical piece of coastline above Newcastle and just south of Scotland. Bamburgh Castle and the beaches around there are so romantic, with lots of different castles and ruins and so much heritage. Its kind of where Christianity began in England.

And then you have the Farne Islands which, between May and July, have thousands and thousands of migrating birds. We experienced huge numbers, including puffins. We saw seal life and dolphins, an incredible amount of activity.

You can do boat trips out to the islands, which is great. Or you can walk for miles, if you go to place like Lindisfarne in Northumberland, and not see anybody. You just see white sand – on the right day, it’s how you’d imagine a tropical island. 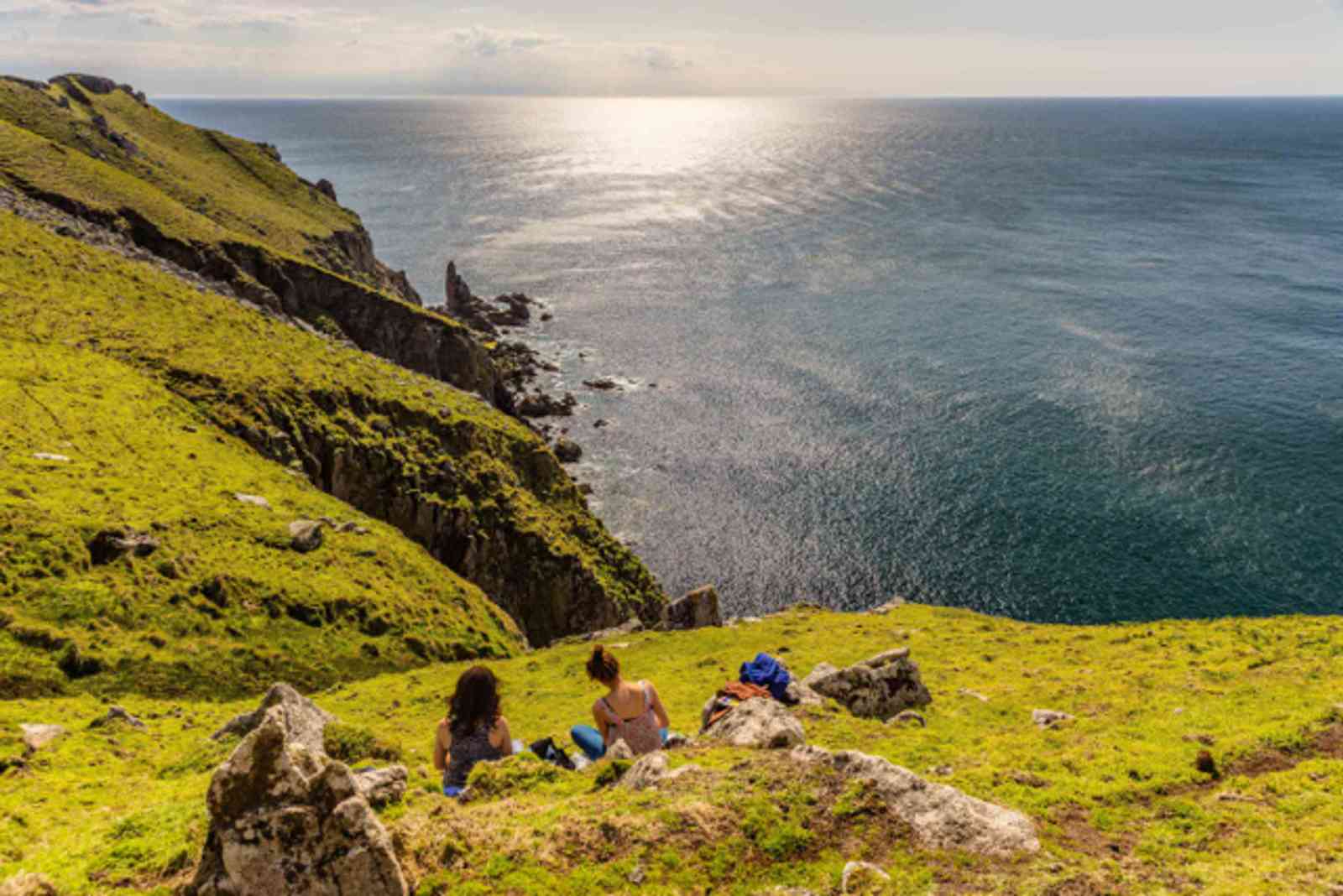 View of the Atlantic ocean from Lundey (Chris Orange)

Lundy is 12 miles off the coast of Devon. It’s the most magical island I’ve visited. It’s a long way off the coast. When you get off the ferry, you’re on the edge of the Atlantic.

One side of the island looks out over the Atlantic, and the sun sets over the Atlantic. That’s the side with a cove, called Jenny’s Cove, and that cove has a huge amount of migrating birds, dolphins and other life around there.

It’s three miles each way, so quite a small island, and there’s no one there. There are a few holiday lets. A few daytrippers visit but they go quite early. You can be there on your own, walking around. For some people, remote means an island. For people who live in cities and large towns, what is ‘remote’ is to get out to somewhere that feels like it’s a long way away.

I really love Hartland in North Devon for that reason. For some of the people who live in cities and towns in the southeast, that feels very remote. You can get to places that feel remote quite easily.

In particular, I like Hartland Point, the stretch of coast there along North Devon, which feels very remote. It’s a rugged and very beautiful stretch of coastline. You can walk for miles and miles.

There’s not much there, which is brilliant. It’s not really a place for great wildlife. There’s just a rugged rocky coastline to explore. There’s farmland and beautiful views out into the ocean. It feels incredibly remote and the hiking there is fantastic.

Chris is also an ambassador for Rohan travel and outdoor clothing. See www.rohan.co.uk for more details and visit www.wanderlust.co.uk/hot-offers for 10% off Rohan clothing.