I’ve worked on my fried chicken for many years, researching every recipe that I could lay my hands on, from early antebellum instructions to the Kentucky Colonel’s secret technique. This recipe uses five fats, and each one contributes to the flavor of the result.

To do the chicken right, you need an old black cast-iron skillet with a lid. Sure, you can make it in a deep fryer (like we do at the restaurant), but I prefer the old-fashioned way, which is nearly impossible to pull off in a restaurant. The skillets take up so much stove space that you can’t make more than ten orders at a time. So this isn’t the fried chicken you’re going to eat at Husk. This is the way grandmas cook fried chicken in the South, and it’s the way everyone should be making fried chicken at home.

This recipe takes a lot of time and attention, way more than most conventional approaches (the chicken must be brined for 12 hours, so plan ahead). But it’s good. Be sure to ask your butcher for the chicken skins to render for fat and to save the cooking fat, which makes mighty fine gravy. I’ve thrown that recipe in here too, to complete the meal just like my grandma would have.

For the brine:
1. Put the water in a pot and bring to a boil over high heat. Remove from the stove, add the tea bags, and let them steep for 8 minutes.

2. Remove the tea bags, or strain the liquid if you used loose tea. Add the salt and sugar to the hot water and stir to dissolve them. Pour the brine into a heatproof container and cool it to room temperature, then refrigerate until completely cold.

3. Cut the chicken into 8 pieces: 2 legs, 2 thighs, 2 wings, and 2 breast pieces. Rinse with cold water. Place in the brine, cover, and refrigerate for 12 hours.

4. After the chicken has spent 12 hours in the brine, make an ice bath in a large bowl with equal amounts of ice and water. Place the chicken in the ice bath for 5 minutes. (The ice will rinse away any impurities.) Remove the chicken and pat it dry.

5. Combine the buttermilk, hot sauce, and 1 tablespoon of the black pepper in a large container. Add the chicken to the buttermilk mixture, cover, and let marinate for 1 hour at room temperature.

6. While the chicken is marinating, put the chicken skins in a small saucepan over very low heat, adding a small amount of water to prevent the skins from sticking and burning. Cook the skins, stirring frequently so that they don’t burn, until their fat is rendered. Strain the fat; you need 1 cup.

8. Combine the flour, cornmeal, cornstarch, garlic powder, onion powder, the remaining 1 teaspoon black pepper, the cayenne pepper, and smoked paprika in a large bowl and mix well. Add the chicken and toss to coat thoroughly. Allow it to sit for 15 minutes, then shake off any excess, transfer the chicken to a wire rack, and let sit for 15 minutes.

9. Meanwhile, put the chicken fat, lard, and canola oil in a large, deep cast-iron skillet. Add the bacon and ham and heat the fats to 275°F. Turn the heat off and allow the bacon and ham to infuse the fats and oil for 10 minutes.

10. With a skimmer or slotted spoon, remove the bacon and ham from the skillet (discard them or eat as a snack) and heat the oil to 300°F. Add the breasts and thighs and cook for 3 minutes. Add the legs and wings and cook for 5 minutes. (Remove the fat needed for the gravy at this point and start the gravy.)

11. Turn the chicken over, cover the skillet, and cook until the pieces of chicken are the color of hay, about another 5 minutes. Remove the lid, turn the pieces again, cover, and cook the chicken until golden brown, another 3 minutes. Add the butter and continue cooking, turning the pieces once, for another 2 minutes or so on each side. The chicken should be crispy and golden brown. Let the chicken rest and drain on wire racks or on a plate covered with paper towels for about 8 minutes, but no longer.

12. Sprinkle with sea salt and serve with the gravy.

Note...
If you use a large, deep cast-iron skillet and the recommended 3-pound chicken, a small bird called a fryer, you shouldn’t have any trouble frying all the chicken at one time. If that isn’t possible, use two skillets and mix two batches of fat to achieve the flavor and crispness imparted by the combination of fats.

1. After the chicken has fried for 8 minutes and is ready to turn, carefully remove the fat needed to make the gravy from the skillet. Put ¾ cup of the fat in a medium saucepan over medium heat, stir in the flour to make a roux, and cook for 2 minutes, stirring constantly. Gradually whisk in the milk. Reduce the heat to medium-low and cook the gravy, stirring occasionally to be sure that you don’t have any lumps, for 15 minutes to cook out the taste of the raw flour.

2. Add the salt, pepper, and soy sauce, then whisk in the remaining tablespoon of cooking fat to make the gravy glossy. The gravy can be kept warm, covered, over the lowest heat for up to 20 minutes.

In my family, fudge is a holiday dessert. And it may come as a shock to some, but the key ingredient in this fudge is Velveeta cheese. The ultra-creamy nature of the processed whey melts more evenly than traditional cheese, and it presented twentieth-century home cooks with a new texture when it was first introduced. Well, everyone knows I am dedicated to heirloom ingredients; now I suppose you can add Velveeta to the list. 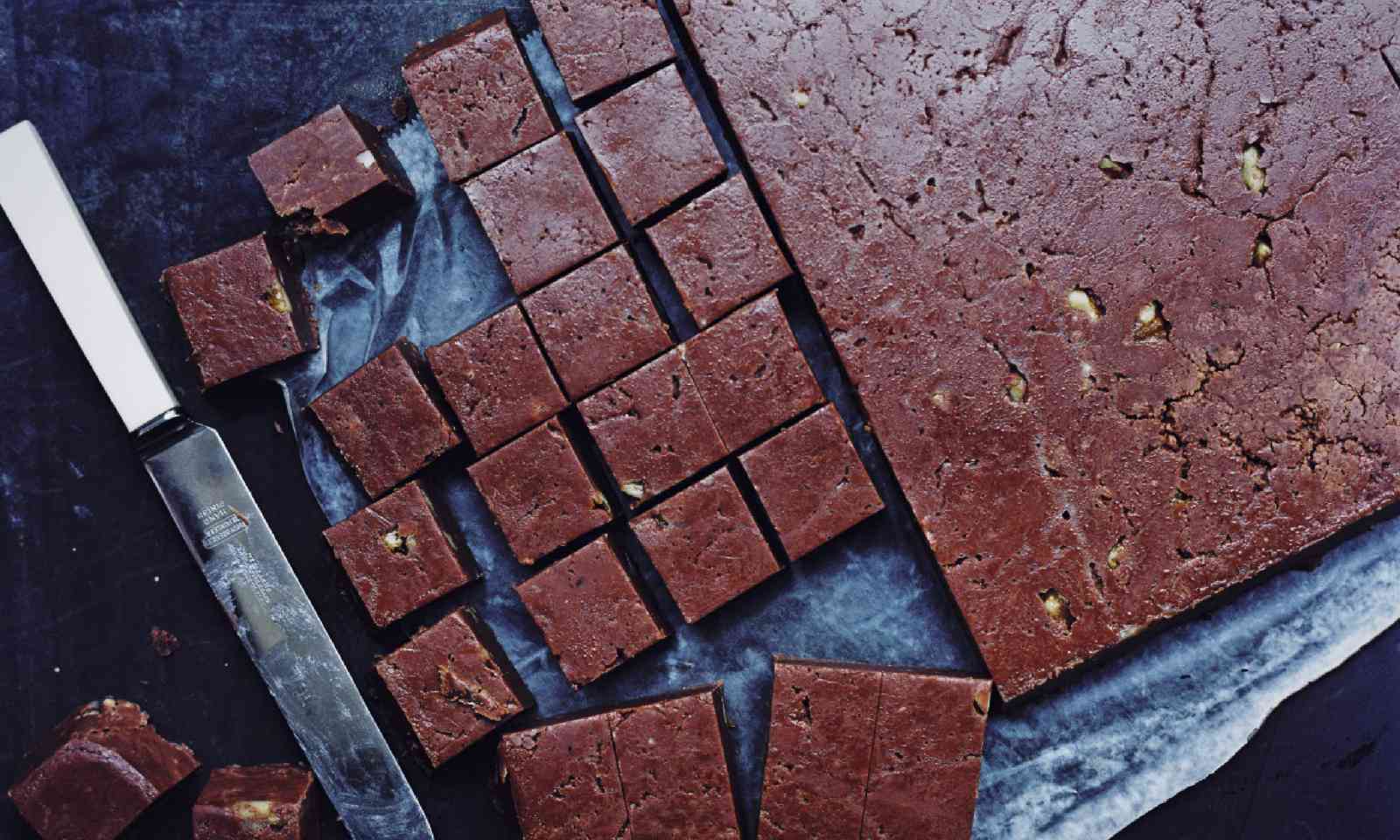 3. Put the confectioners’ sugar and cocoa in a large bowl and whisk together, making sure that no lumps remain. Add the nuts and stir to combine.

4. Add the sugar mixture to the cheese mixture, then add the vanilla and stir until the sugar is dissolved and the mixture is smooth. Pour the fudge into the prepared pan. Tap the pan on the counter to remove any air bubbles and smooth the top with a small offset spatula. Refrigerate for at least 8 hours; wait until the fudge is cold before covering it, so that moisture won’t form on the top. Cut the fudge into 1-inch squares. Serve at room temperature.

These recipes are taken from Heritage by Sean Brock (Artisan, £27.99). Copyright © 2014. Photographs by Peter Frank Edwards.