5 reasons to visit the north of Thailand

Away from the glitzy resorts that dot the beaches and islands of the south, for many, Northern Thailand is the real gem in Thailand’s crown. Here are five reasons why… 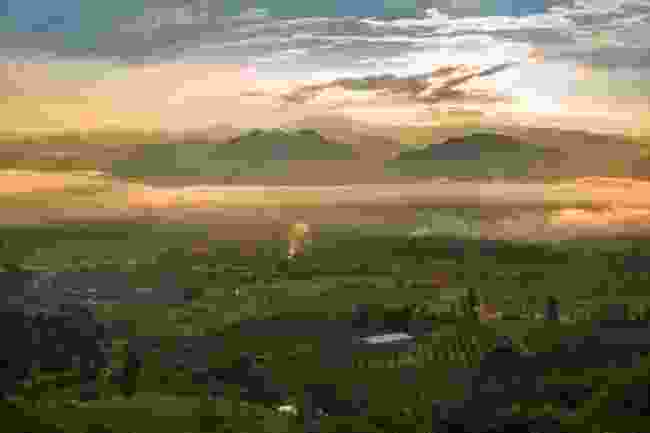 A sea of clouds in Mae Hong Son valley (Shutterstock)

Hiking through the rarely visited jungles of Northern Thailand will conjure up visions of explorers of yesteryear searching for a “lost city”. This is a great area for wildlife lovers with a plethora of birds and smaller mammals such as monkeys to spot. It is a world away from the noisy streets of Bangkok and other Thai cities.

Northern Thailand is home to “the roof of Thailand,” the country’s highest peak, Mt Doi Inthanon. Some of Thailand’s most beautiful waterfalls, such as Wachirathan and Mae Ya are also in this region – both are in Doi Inthanon National Park. There are vast caves such as Tham Lod too, for those who dare to venture underground.

If you prefer tarmac rather than jungle, endless views of evergreen forests can be had from the roadside on virtually every drive in this region. Get up before sunrise and you may even be lucky enough to be treated to the incredible “sea of clouds” that descends in some of the valleys in the Mae Hong Son region. As the tops of the mountains pierce through the blanket of cloud, it is a sight to behold in the golden early morning light. 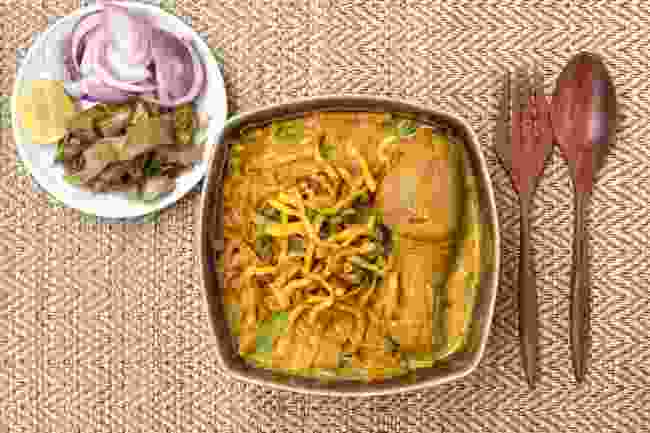 Whether you are after cheap eats in markets or gourmet meals in high-end restaurants, Northern Thailand delivers in scrumptious plate loads on both fronts. With influences from Thailand’s Isaan and Lanna kingdoms as well Malaysia, Myanmar, Laos and even India, it is hard not to fall in love with the culinary delights of Chiang Mai, Chiang Rai, Mae Hong Son and Pai.

Everything from curries, soup and tofu to barbecued meat and freshly prepared pad Thai is served in markets and stalls around the towns and cities. Many dishes are a speciality in Northern Thailand such as gaeng hung lay (pork belly curry). But the most famous of all, and one not to miss out on here, is khao soi gai. Soft noodles are cooked in a coconut curry broth along with chicken thighs or beef, then loaded with a handful of crunchy noodles. It is a hearty meal full of flavour with a hint of spice (if desired). 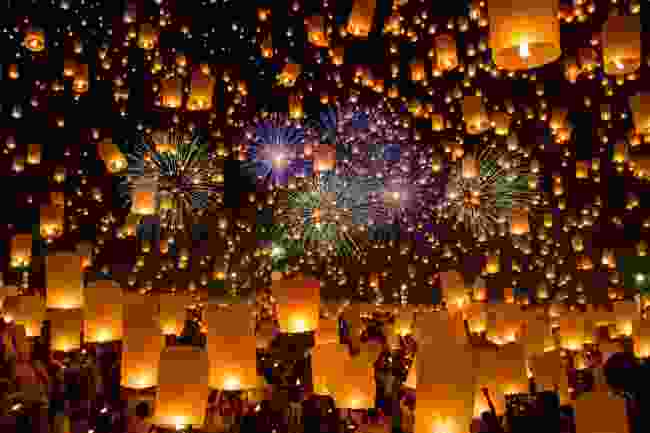 Chiang Mai is a glorious city to visit at any time. In stark contrast to Bangkok, life is more laid back here and it doesn’t suffer from as much noise, pollution and traffic. One of the best times to visit this city is in November during the Loy Krathong and Yee Peng festivals. Loy Krathong is celebrated all over Thailand but is especially impressive in Chiang Mai and Sukhothai.

Believed to have originated in Sukhothai, Loy Krathong is known as “the festival of light”. It is held during a full moon on the 12th lunar month, which is usually in November. During this festival, Thai people line up along rivers, ponds and canals to float small lotus blossom-shaped vessels filled with candles, incense sticks and flowers across the water. It is a sign of respect to the river goddess Pra Mae Khongkha from whom they will seek forgiveness for any mistreatment of water such as consuming too much or polluting it. The Thai people also wave goodbye to their sins and misfortune of the past year and make a wish for the coming year.

What makes the Chiang Mai festival extra special during this time is that Loy Krathong is celebrated in tandem with another lantern festival called Yee Peng. Traditionally this festival marked the end of the monsoon season as a standalone event but it can now be experienced at the same time as Loy Krathong. The highlight is the thousands of floating lanterns that fill the skies of Chiang Mai. Combined with the extravagant decorations and parade that snakes through the city’s streets, this is a magical time to visit. 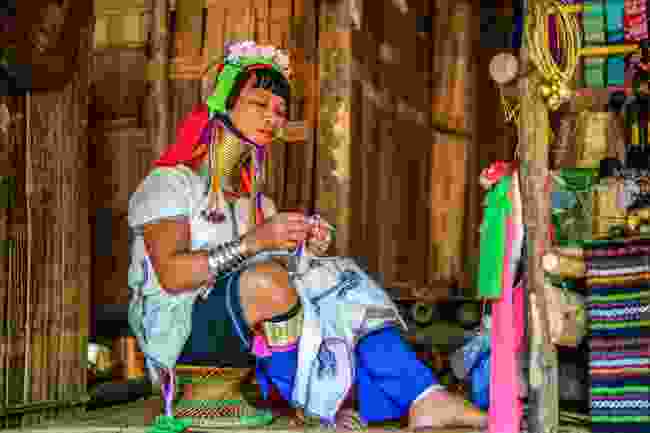 A woman from the Padaung tribe (Shutterstock)

Due to its proximity to other bordering countries, the north of Thailand is one of the most culturally diverse parts of the country. Over centuries, many tribes from different backgrounds have settled in the formidable jungles and mountains of this region. While some of these areas have become too busy with tourists, if you venture into local communities away from the cities you can still get a glimpse of authentic village life.

The Karen tribe is the largest hill tribe population. Within this tribe, the most famous sub-group is the Padaung, where women wear heavy brass rings around their necks, arms and legs. Other hill tribes include the Lahu, Lisu, Akha and the Hmong, who are famed for their intricately embroidered clothes and silver jewellery. 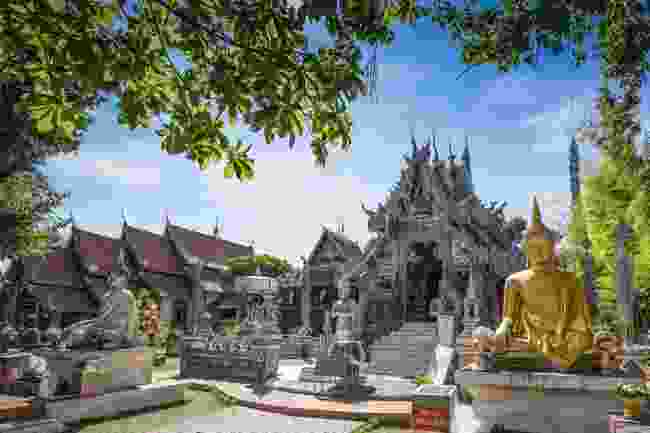 Thailand is estimated to have over 40,000 temples, some of which are mere ruins. Chiang Mai alone is home to over 300, including some of the country’s most eye-catching and historic.

Phra That Doi Suthep is one of Thailand’s most significant temples. Named after the mountain it sits on, this temple dates back to the 14th century, although it has been a holy place of worship for more than 1,200 years. The area’s original inhabitants believed their ancestors’ souls lived on the hilltop.

There are many other noteworthy temples in this region such as the partially destroyed 600-year-old Wat Chedi Luang Worawihan or Wat Chiang Man, said to have been the first temple built in Chiang Mai around 700 years ago. It is believed that King Mengrai lived in the temple during the construction of Chiang Mai which was, at the time, the capital of Lanna kingdom.

The sheer variety of temples will keep anyone intrigued, such as the unique Sri Suphan temple. It is known as the “Silver Temple” because it is completely covered in silver – even the statues of Buddha.

But arguably the most beautiful of all the temples is Wat Rong Khun, or as it is commonly known, the “White Temple”. Created by the artist and painter Chalermchai Kositpipat in 1997, it is an unusual design, combining Buddhist beliefs and the artist’s imagination. Over the years it has topped many polls of the most beautiful temples in the world.

Trips of a lifetime: Thailand

The Wanderlust guide to the best of Thailand

7 Thailand trips for the adventure of a lifetime

Thailand: meeting the hilltribes on a trek through the north

The railroad less travelled: taking the slow train from Bangkok to Chiang Mai