Great pubs, lively music and deliciously fresh seafood – the bohemian city of Galway offers the best of Ireland in a nutshell … and it’s a European Capital of Culture... 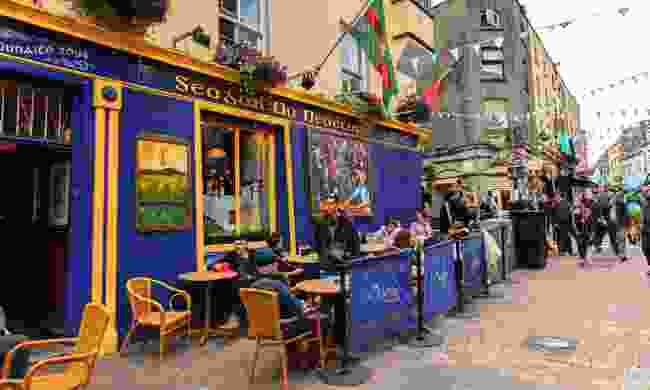 A pub in Galway (Shutterstock)

Ireland is famous for its pubs and Galway's are amongst the liveliest in the country. Order yourself a pint of Guinness and before you’ve reached the bottom you’ll be swept up in a conversation with a friendly local or tapping your foot to the beat of an Irish jig, played by a local band.

Head to the centre of Galway and you’re spoilt for choice. Tigh Neáchtain on Cross Street is a great place to start. With its warm nooks and crannies and nick-nacks and memorabilia, it seems this is the pub every bar around the world has been modelled upon.

O’Connell’s with its press-tin ceiling and stained glass windows is another charmer. Murphy’s and Garavan’s are other local favourites, the later especially famous for its selection of whiskeys.

Make sure you sample the local Galway Hooker Irish Pale Ale. Named after a local type of boat, it is brewed locally and on tap in every pub. Eschew Guinness and order a Hooker in Galway and you’ll make friends for life. 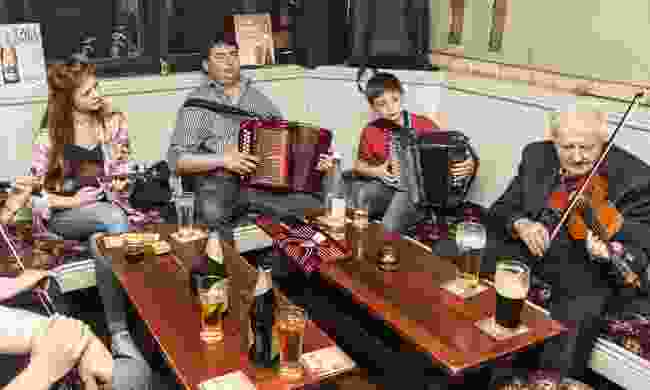 If your idea of Irish music is Ed Sheeran singing about a Galway Girl, you’re in for an education in Galway proper. The city lives and breathes music and is regarded as the spiritual home of traditional Irish music.

From the buskers on street corners to raucous trad sessions in the city pubs, Galway is alive with the sound of fiddles, tin whistles and bodhrán, the distinctive hand-held drum made of goat skin.

Finding a live performance is literally as easy as cocking your ear and following the music. Nearly every pub in the city offers live music and the buskers are incredible.

Having said that, some pubs are more highly regarded by locals than others. Catch a proper céilí (traditional music session and dancing, pronounced 'kay-lee') at Tig Cóilí, Taaffes, The Crane Bar and An Púcán. A night of rollicking music, drunken singalongs and high spirited jigs is absolutely guaranteed. With its main street of colourfully painted buildings and medieval arch, looking out across the Atlantic, Galway is already one of the most picturesque places in Ireland.

But it's as a base for exploring some of the most Irish stunning scenery that it comes into it’s own. The Cliffs of Moher, the Burren, the Aran Islands and the wild beauty of Connemara, are literally on Galway’s doorstep.

Follow the Wild Atlantic Way out of the city and you’re in for a treat. The plunging Cliffs of Moher are imposing and dramatic, especially on a stormy day when the Atlantic is pounding in.

The rocky moonscape of Burren is quite unlike anywhere else in the country. And Connemara National Park  is a world unto its own – a land of bogs, empty valley and still lakes, dotted with cosy pubs warmed by peat fires, to take the chills away.

Galway has always been a cultural hub: a place that draws painters, musicians and other artists and complies them to create.

Arguably Ireland’s most bohemian city, it has a rich and full calendar of festivals and events, including an annual comedy festival, the Loughrea Medieval Festival, a jazz festival, one of the biggest St Patrick’s Day parades in Ireland and, of course, the famous Galway Races.

That cultural heritage is set to get an even bigger boost in 2020 during Galway’s tenure as a European Capital of Culture. Set to be the largest cultural event ever held on Ireland, it starts with a week of ‘fiery celebrations’ in February and continues with over 1,900 events held over the year.

Expect French aerialists performing daring deeds in Eyre Square, the Connemara mountains illuminated by a Finnish light artists, Homer’s Odyssey performed on the beach and a giant mirror pavilion set in a bog. And music. Lots of music. 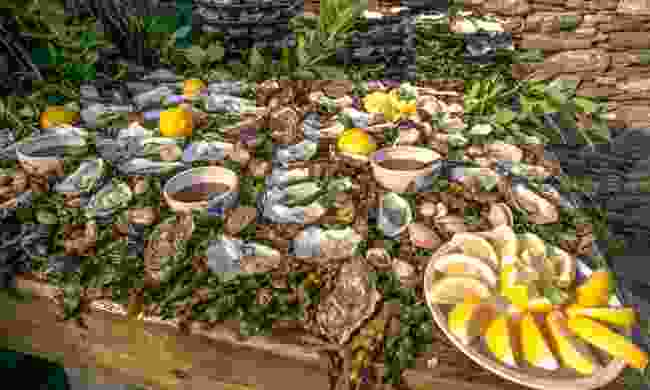 You can’t visit Galway without trying its world famous oysters. Plucked from the clean, clear waters of the Atlantic, they are plump and salty and sought by chefs around the world. Such is their illustrious stature, a long-running festival, the Galway Oyster & Seafood Festival, is held in their honour every September.

To be honest, all the seafood in Galway is sensational. The west coast monkfish is delicious and the signature dish at Oscars, a popular seafood bistro in town. West coast crab is good too and a great excuse to pop into Kai, the city’s hippest cafe, to try. Michelin-starred Ard Bia at Nimmos only use fish sourced locally and caught the same day.

The fabulously fresh seafood can be sampled more casually, too. The weekend market, held in the shadow of St Nicholas’ medieval church offers street food including sushi, curries and Mediterranean style dishes. And the fish and chips from McDonagh’s is to die for. If you’re in town in late March, the Galway Food Festival offers an unbeatable overview of the foodie scene in this part of Ireland.

How to drive Ireland's Wild Atlantic Way in 3 days