From fireworks in Fiji to parties in Antarctica, find out how the world welcomes the new year with our favourite readers' tales

I got greedy. Fireworks went off on the beach, the band played on, and the guests jumped in the pool while still wearing all their clothes. This New Years celebration on one of the small islands of Fiji was the perfect intimate celebration. But, I wanted to experience the joy and rejuvenating feelings again, immediately. Early on the first of January, I flew to Honolulu, Hawaii for an extended layover before heading home. But since the flight was in the morning and there is a 22 hour time difference between these two islands, I arrived in enough time to celebrate the New Year all over again! Celebrating two New Years in the same year, does that make me one year older than everyone else? It was worth it. 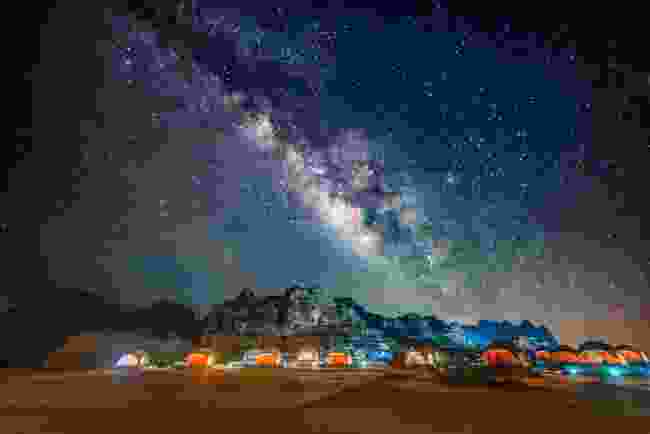 One reader spent their New Years in Wadi Rum (Shutterstock)

As the new millennium approached, some may recall there were panic stories that as the computer clocks switched from 1999 to 2000, then aeroplanes would fall from the sky, banking would grind to a halt with our money locked in the bank vaults, computers would cease to function. All nonsense of course but the scaremongering sold newspapers (and induced panic buying)! I wanted to get away from it all and so decided to book an adventure holiday in Jordan, with the highlight being, spending New Year's Eve in Wadi Rum with the Bedouins. My fellow travellers were a motley crew from several countries and so we were to 'see the New Year in' several times that night as each toasted to the new millennium in their own time zone, starting with an Australian couple. The Bedouins had prepared Maqluba, a traditional rice, meat and vegetable dish which is flipped upside down when served, (Maqluba translates as "upside-down"). As midnight was approaching, the Bedouins started whispering amongst themselves and were obviously plotting something! We counted down from ten as the new year approached ... on the 'zero', amidst the cries of 'Happy New Year', the Bedouins jumped up and snapped Emergency light sticks and ran around waving the glow sticks in the air, shouting "Bedouin fireworks" ... a great surprise and such fun! Later, when sleep started to overcome us, I headed away from the group, laid out my sleeping bag in the sand and just stared into the night sky .. the peace and tranquillity and the myriad of stars unspoilt by light pollution was so calming. Strangely enough, the lack of aeroplanes in the sky did not concern me one bit!

My husband and I saw in the New Year in Oman, being Scottish my husband donned his kilt and all the accessories. The lovely Omani locals had never seen anything like it and aske him to stand on a plinth so they could all take a photo, the plinth was quite high up and my only concern was were they going to find out what a Scotsman wears under his kilt? We had a wonderful time with excellent food. A few years ago my son and I spent New Year at the Ice Festival in Harbin. During the day we crossed the frozen Songhua River on foot to see the snow sculptures and in the evening went to the Ice Park. It was FREEZING but amazing to watch fireworks surrounded by huge ice sculptures that were also all lit up. Definitely the most memorable New Years Eve I've ever had.

Really enjoyed celebrating New Years in Goa. Party started in the hotel but at midnight they lit an effigy and paraded the burning man to the beach and the party continued there. I didn’t make it to bed that night as I stayed up to watch the sunrise with some people I’d been talking to at the party. Great times.

We all went for a night scuba dive in Velassaru, Maldives, the water was so warm and clear and we watched the firework display underwater, it was amazing, better than being on the beach which we relaxed on afterwards

As a Scot I always believed Hogmanay in Scotland could not be beaten but then I went to Goa. What a spectacle, the fireworks, the crowds, the colours and the joy of swimming in the sea on New Year's morning. An amazing experience never to be equalled

My partner (now deceased) and I spent many Christmas & New Year times in warmer places far away from home. This is an extract from her diary when on a small group trip to Thailand’s islands which had been devastated by the tsunami just a year earlier when we were further North by the R Kwai on that tragic day. Koh Lanta. 31st Dec 2005: After a good day scuba diving we decide we’re not doing the “International Buffet” New Year celebrations at our hotel, so play truant; and, having dressed appropriately for crossing the stream flowing across the beach (i.e. not my best frock), we head for the “Funky Fish” again where we have dinner with two of the other couples in the group. Afterwards to the “Moonwalk Bar” where more of our group are. Wonderful atmosphere on the beach – lots of fireworks, miniature illuminated hot-air balloons floating through the night sky, and no loutish behaviour whatsoever. Shortly after midnight we walk back to our resort (the stream is now only ankle deep!).

Partying in the Pacific 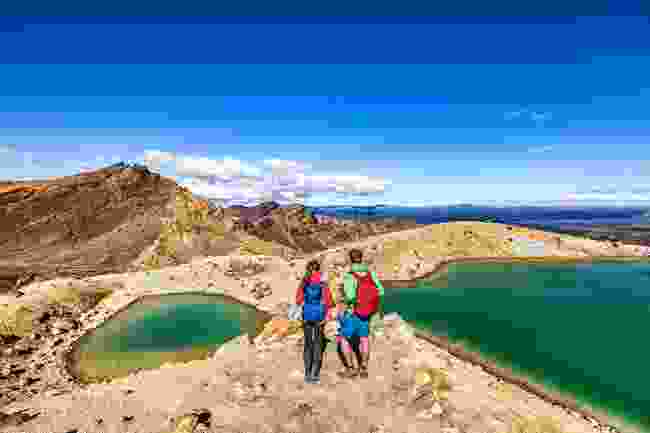 New Year of 2011. I had been made redundant so decided to visit my friends in Auckland New Zealand for a few weeks. New Years Eve was spent on a rooftop bar in the city. Fabulous night, everyone was so friendly. The most amazing fireworks display which lit up the amazing Sky Tower. I've never drank so much in my entire life. The New Zealanders really can drink and know how to party even more so than the Brits. Needless to say, there was no activity or even much of anything on New Years day other than eating junk food !

I was one of the first to book a room at a new youth hostel at the Sydney docks, making sure I got coveted tickets to their roof deck for New Year's Eve. It was fantastic to watch two sets of fireworks display in comfort instead of having to stake out places in the hot sun from 10am down on the ground. It was a money-can't-buy experience yet, incredibly, it was at backpacker prices!!

My memorable New Years Eve was spent wild camping solo in New Zealand. As close as possible to the Tongariro Crossing ready for a Sunrise hike on Sun Years Day!

We were travelling around the world for a year and wanted to be as near to the first sunrise in the world on January 1st 2000 so our children could celebrate the millennium. We had a wonderful Lovo feast in Fiji and slept on the beach to witness the first rays of the sunrise. Unforgettable. Sheepstail 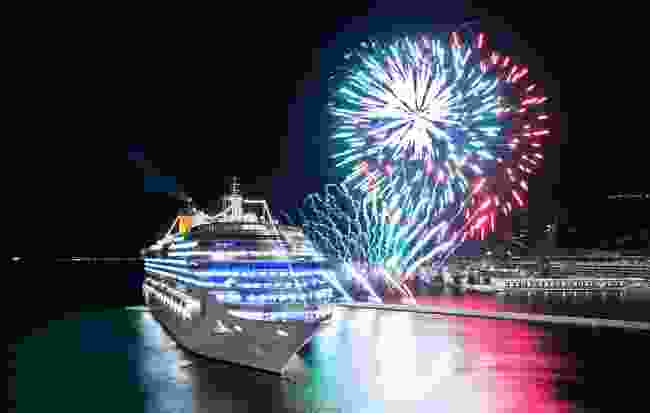 I celebrated New Year's Eve as a crew member on a cruise ship, we were actually in the middle of the East China Sea, a glowing orb of rainbow colours illuminating across the ocean! The marine life must have had a hard time sleeping with all the cheery celebrating onboard - from dance music anthems to people laughing and clinking of glasses at midnight. It was certainly unique to spend NYE on a giant floating-city!

The location was unique for my wife & I as we were on board MS Fram on New Years Eve in 2016 and we were heading towards the Drake Passage leaving Antarctica. The crew on board ensured that everyone was able to enjoy the party and the weather and scenery were fabulous. There was slight apprehension about the weather holding due to the notorious reputation of the passage. At midnight a few guests ventured on deck --briefly--to capture the scene as the daylight faded a bit. It was quite chilly but an amazing scene in such sensational surroundings. Then a quick dash inside for a celebratory drink. A real one-off occasion for us. 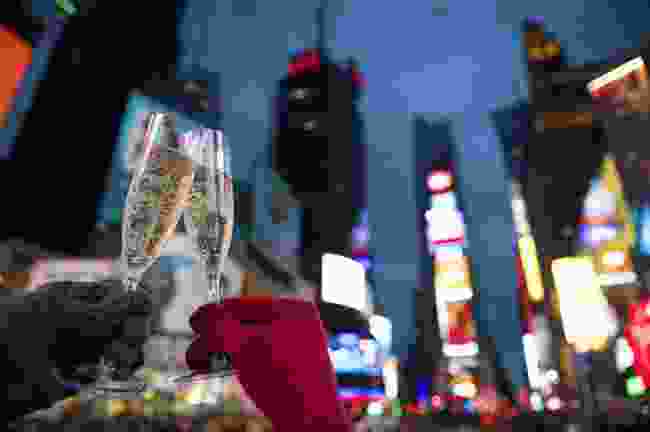 Holding tightly onto a crinkled BA plane ticket and with young eyes wide open, myself and my younger sister Joanna, giddily scurried onto our first flight abroad alone. Touching down into the French Riviera we scrambled onto a coach headed for Cannes, arriving to a crisp French sea breeze and a subtle buzz in the air, after all it was the 31st of December. That evening wrapped in our warm scarves disguising our debatable evening attire we headed out to the Promenade de la Croisette . Standing in awe of Hotel Barrière Le Majestic naively staring whilst admiring all the chic French locals pouring out onto the streets in their tuxedos and cocktail dresses. The midnight bells rang in with gleaming fireworks filling the sky with ambers, the sparks reflecting on the water and onto our gazing faces. Young families and locals fill the streets, cheering as the fireworks shot and soared into the air from the distance from boats in the distance. All perfectly synchronised to a James Bond theme musical ensamble. Feeling young and carefree we headed off to a party in the bay. “Here’s to travel !” we would say chinking our mature wine glasses at each other both knowing this would be a New years we would never forget.

We spent the last day and night of 2018 in the only hotel up the top of Machu Picchu, enjoying Peruvian dancing and music, waking up on new years day taking a walk up to the sun gate. The walk up was misty, couldn't see a thing, but as we got to the sun gate the clouds cleared as if by magic and the wonderful ancient city of the Incas appeared. Something I will never forget.

In a freezing Time Square in New York, waiting for the famous ball drop, had been there for hours, just seconds before midnight, I turned to wish my neighbour a Happy New Year, when I realised it was my favourite actor Matt Le Blanc and I was so stunned, I dropped my phone, bent down to retrieve it and missed the big event. Did get a consolation peck on the cheek from Matt though!

My wife and I got engaged on a New Year’s Eve night out in Nashville, Tennessee 7 years ago so it’s always been a special time of year and place for us.