Ray Mears: “The wilder it is, the more I like it.”

Ray Mears is famous for bushcraft and exploring the world’s wild places. As he prepares to tour the UK, he talks to us about wilderness, travelling solo and going eye-to-eye with a wolf...

How would you define a wild place or wilderness?

A road verge for wildlife might be wilderness because we don't go there, but, for me, I talk about big wildernesses where you're a long way away. It's a place that makes me light up. The wilder it is, the more I like it. Some people are the opposite. I can be really irritating to travel with because just when it gets really difficult, I really enjoy it.

If someone wanted to experience true wilderness, where should they go?

If they were to do a remote canoe trip in Canada, they would get that sense of isolation, especially if they went alone. But solo travel doesn't suit everybody. There are people who go travelling solo and really enjoy it, and there are people who go because they have something to prove and really shouldn't go. For the latter, it can be psychologically devastating in that they discover they can't cope being on their own.

Do you prefer travelling alone?

I love travelling on my own but I don't get so much opportunity to do that because people want me to show them around and I also love travelling with my wife. But I'm probably due a solo trip 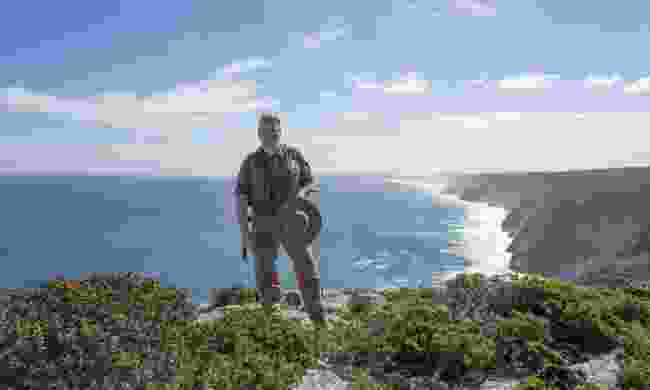 Ray Mears on the Australian coast (Tin Can Island)

“I can be really irritating to travel with because just when it gets really difficult, I really enjoy it.”

If you could choose anywhere to go solo, where would you go?

I tend to choose the Canadian North and I love travelling by canoe. I think it's the most elegant way of travelling. Canoes, as it's been said before, are the finest human invention.

I love hiking in jungle on my own, too, such as in Central America. I also love the African bush. I'm very lucky because the skills of bushcraft make you feel at home wherever you go.

Do you keep lots of notes when you travel?

No. Only in my head. I've got a very good memory. I do take a notebook and pen, but not to inspire my writing. It's so that, if I'm learning something, I can write it down immediately. I never let something sit, if someone shows me a plant and they only give me a local name. I won't be happy until I find out the scientific name is and learn more about it.

Do you use a camera or a camera phone to record as you go?

There's this "Quick, I've got to take a selfie to show I'm doing something authentic" mentality. I think everyone needs to prove who they are visually on social media these days and that's not important.

Sometimes I don't take photos at all. The last trips, where I've been filming in Australia, there wasn't enough time to do photography properly, so I didn't take any pictures at all. I saw amazing things but they're in my head and they go into your soul and they become a part of you.

Rather than spending my time with a camera I spent my time communicating with Aboriginal people and learning more about them. 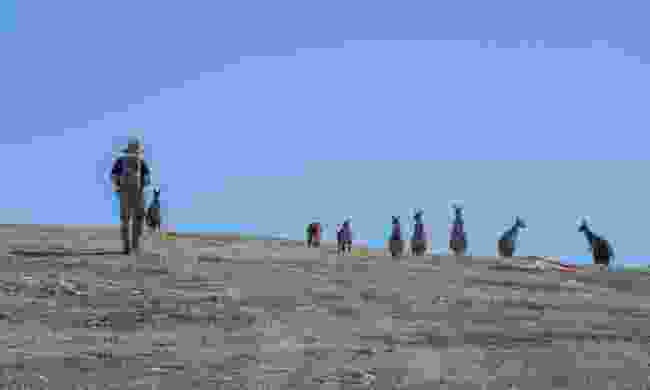 Ray Mears and kangaroos in Australia (Tin Can Island)

Travelling to wild places is becoming increasingly easier. Do you think that's a good thing?

I don't think it matters if people can get there easily. What's more important is what they expect to find when they get there. I get really dismayed when I see people wanting to go on safari, expecting to find flush toilets in the bush and four-poster beds. That may be lovely and they may think that's comfortable, but, actually, it would be better if they did it the old way, where they had to adapt themselves to the landscape first to understand that luxury in the bush is simplicity.

Would you rather rough it every time when you travel?

One example was when I once filmed in Costa Rica. I worked with a very good director who had arranged for us to stay in a luxury eco-lodge. On the first evening, I went to the bar dressed in my jungle greens and had the mickey taken out of me by two girls from New York. I was so irritated that I took my stuff, hiked up into the jungle, put my hammock and tarp up and lit a little fire.

As I was about to doze off, I heard this noise coming towards me. I looked over with my headtorch and a jaguarundi came underneath my tarp and stepped on one of the logs on the fire. The fire had burnt out and as he stepped on the log, a little sparkle of sparks came up. I saw that. They didn't see that and they would never see it because they're in their mosquito-netted, fan-assisted accommodation with their gin and tonics, whereas I was out in the bush. I've never looked back from that moment.

Have you noticed travel to these kinds of places has changed?

Yes. More and more, roads are becoming metalled. Particularly in Australia, they're laying down tarmac everywhere. It's good for the locals and it brings business, but it brings the wrong attitude. There was something special about people who knew how to drive off-road. They helped each other out.

I was in a car not long ago in Australia - somebody else was driving - and he cut this car up because it had cut him up at the petrol pump a few minutes previously. I said to him that in 50 miles time, he might need them to pull us out of a ditch. You need to make friends in the bush, not enemies. I realised that I have an understanding of what it's like to travel in wild places, whereas the driver was bringing his urban attitudes into the wild. As the tarmac spreads, I believe we'll see more of that.

You're about to tour the UK with Born To Go Wild. What's it about?

I'm going to be talking about bushcraft and making fire, as it is very important to humanity because it's enabled everything that we have and witness today. I'll also be talking about the filming I've been doing in Australia and beyond. I'll cover important skills like observing wildlife and nature, as bushcraft is a combination of the two. 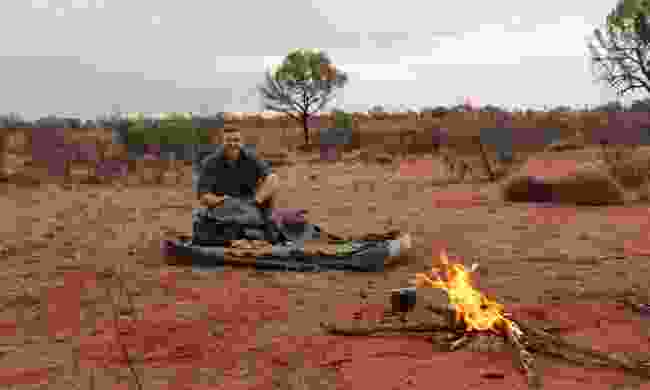 Bushcraft and survival skills in Australia (Tin Can Island)

A lot of people don't think about wildlife when they think of bushcraft, do they?

Not to start with. Most people find their way into bushcraft with the question: "Could I survive?" But survival is the shorthand of bushcraft. I don't normally teach survival to civilians. I save that for the military because that's a pretty brutal subject. But for civilians we can indulge the longhand, which is how to live in the environment as a native. It takes longer, but it's deeply rewarding and it transforms your view and perception of nature.

Of all the different aboriginal people or tribes you've met on your travels, which have been the ones that have stuck with you the most?

So many. I've got friends in native communities all over the world. Canadian First Nations and Siberian Evenki were both amazing to work with. I have a real fondness for Australian Aboriginal people. There's something special about them. They still have so much knowledge about living in the bush.

I actually sat down with a map and started to mark all the communities I'd worked with and it's been just about every one. I've also got lots of friends in Africa too, Kalahari bushmen, the Hadza tribe in Tanzania and various other groups. I like Africa a lot.

Where have you been that you'd go back to in a heartbeat?

Many places. Australia. I've made 14 films there in the last two years and I'd still go back tomorrow. I love Africa. There's something special about Africa. It's where we came from. It's deep within us. I love Canada for its canoeing. Lapland is wonderful. 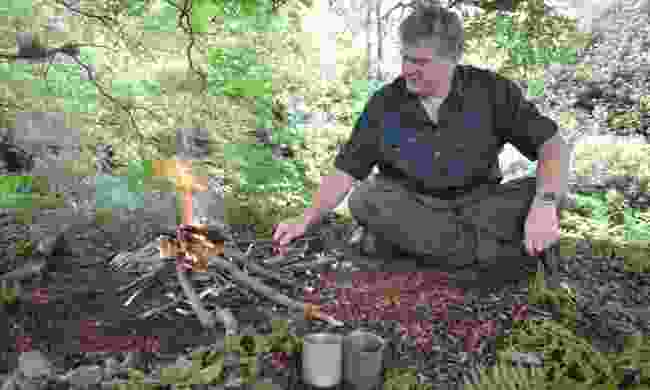 What's been your favourite wildlife encounter?

Recently, swimming with whale sharks on the west coast on Australia, Ningaloo Reef. That was amazing. It's the best place in the world for snorkelling, too. Wolf encounters are special too. In North America, I hiked six miles into the mountains to cast a wolf track. It was as big as my hand. While waiting for the plaster to dry, I had a doze and I suddenly realised there was a presence, and I just sat gently up and there was an alpha male looking towards where I cast and I sat and watched him. He didn't see me and I completely had the drop on him, which is unusual with a wolf, and, in the end, I moved and smiled and the wolf looked at me. It must have been a good two minutes we stood and stared at each other, then he left. I still think that was really special.

For a man who can live off the land anywhere, do you ever take a luxury item with you?

No. I used to think about it but I've got simpler as times have gone on. I've realised that not taking it is the luxury, as you only have to carry it if you take it.

Ray Mears is touring Born To Go Wild in venues across the UK between Oct 08 and Nov 16. For details of the tour and Ray's bushcraft courses, visit www.raymears.com.