Wondering where they're heading on the hit BBC Two series? Here's everything you need to know, including where the race starts, the teams' final destination and where they're stopping along the way...

What is Race Across The World about, exactly?

Five teams of two are competing to be the first to make it to Ushuaia, Argentina – the world’s southernmost city - from the Mexican capital, Mexico City.

Sounds fairly simple, right? You could just fly there. Well, contestants aren’t allowed to fly. Or use a credit card. They’re not even allowed on the internet. Without their smartphones and just the cash equivalent of a one-way plane ticket, they’re forced to figure out how to navigate transport, borders, accommodation and the stress of travelling as a two to reach their destination.

You might say that the joy of the journey is real goal – after all, when else will these 10 travellers embark on such a unique adventure? But the winning pair takes home a cash prize – and of course, bragging rights – so there’s a lot at stake.

Who are the racers for Race Across The World series two?

When can you watch Race Across The World series two?

The second season of Race Across The World aired at 8pm on Sundays, on BBC Two. It was also repeated on Tuesdays at 7pm.

The series has aired, and you can read our interview with the winners here. Now, you can catch up with every episode on BBC iPlayer whenever you like. You can watch all nine episodes of season one on BBC iPlayer, too.

Where is Race Across The World series two filmed?

Each team will be travelling from Mexico City to Ushuaia (Latin America top to bottom, basically) via their own chose route, though they all have to land at a few of the same checkpoints.

We don’t yet know the minute details of each route, but we do know the first few stopping points along the way. Let's take a look... 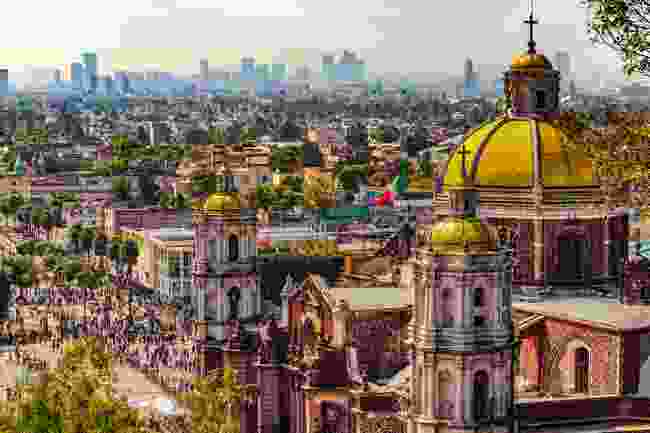 Let’s hope the racers have a moment to enjoy this unusual city, take a stroll through one of the palm tree-fringed streets, admire colonial architecture in La Roma neighbourhood, or taste a tipple (or two) of tequila.

5 reasons you must visit Mexico City 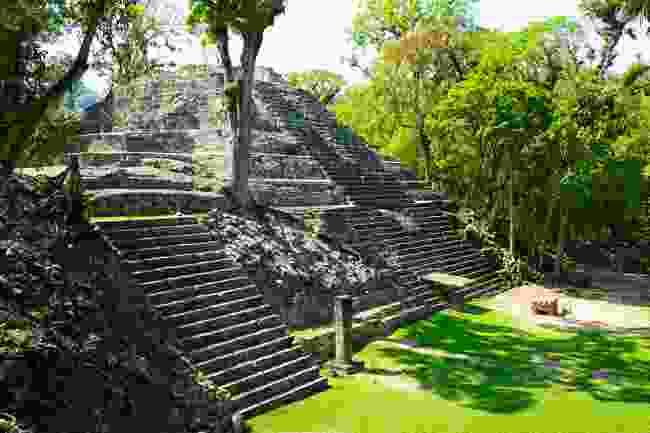 It doesn’t matter how the teams get to the famed archaeological site of Copán Ruinas in western Honduras – as long as they don’t blow their budget.

Copán Ruinas may be one of the most important Maya ruin sites in history. The first references to Copán were found in texts dating back to 426AD, and its thought that it was lived in as a cultural capital of the region for over 2,000 years.

Interestingly, the site wasn’t discovered until 1570, or fully excavated until the 1800s. If you’re fascinated by Maya civilisations, Copán is non-negotiable for your travel wish list.

It’s also be worth noting that Copán is rather close to the border of Guatemala. Will any of the teams end up passing through?

Explore the best things to do in Honduras 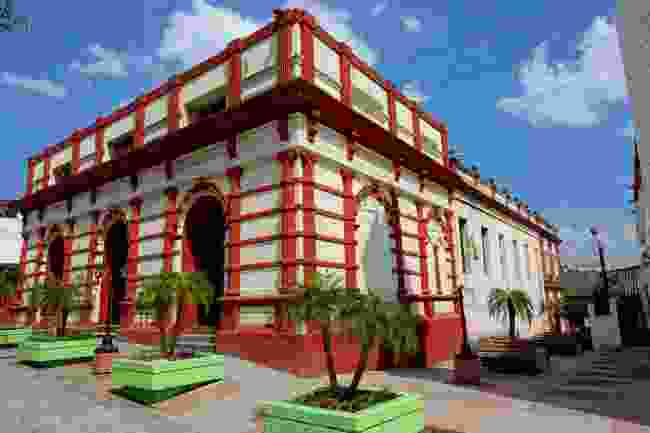 No surprise that at least one of the teams find themselves in western Honduras’ biggest city, Santa Rosa de Copán.

If you aren’t just passing through on your long-winded way to Argentina, there’s much to discover. Insights into local coffee culture – and hands on gastronomy experiences – are plentiful.

Nearby are tobacco valleys used to fuel the country’s traditional, artisanal cigar production. Tours are available, of course. If that’s not for you, you can still enjoy the outdoors with a stroll through the city’s central green space, El Parque. 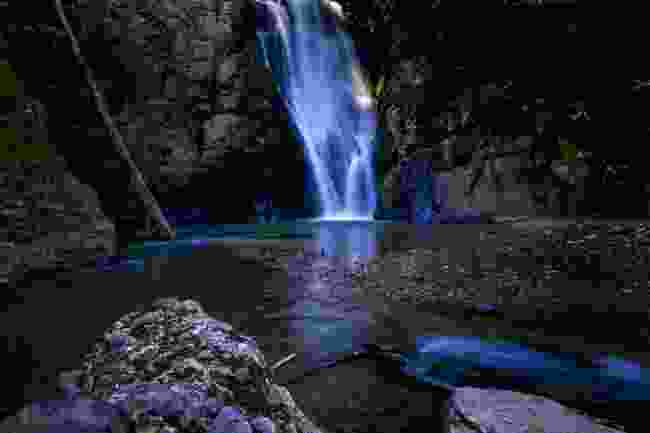 We’ll have to wait and see which teams end up where, but we already know that the journey from Honduras to the second checkpoint involves travelling through Costa Rica, El Salvador and Nicaragua.

One team explores Costa Rica’s cloud forests (no doubt spying an array of rare birdlife) while another enjoys a homestay with the indigenous, family-oriented Bribri tribe, who live in the Limon Province, north of the Panamanian border.

Two of the teams decide to take the road less travelled, with one laying down temporary roots in lesser-visited El Salvador. Worth it for the chance to work in a turtle conservation centre, helping release newly-hatched turtles into the ocean…

El Salvador: Back on the travel map? 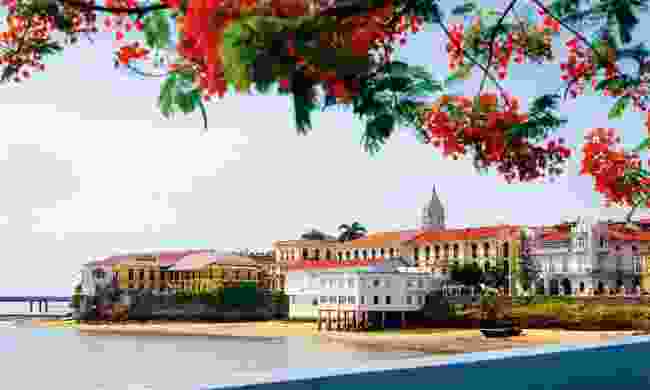 After clawing through forest and dragging oneself away from adorable turtles, the teams must hit their second checkpoint. Like Mexico, Panama went for a straightforward approach to their capital’s name: Panama City.

An exciting blend of classic travel must-sees – like the world-renowned Panama Canal, and the UNESCO-listed Casco Viejo – and brightly-coloured neighbourhoods to meander through, it’s a shame they won’t have long to stay.

Hopefully, they’ll see more of Panama’s highlights before departing to the next checkpoint.

How to spend 24 hours in Panama City

Between Panama and Colombia lies the dangerous Darién Gap.

To cross the countries overland, you’ll have to wade through jungle rivers and trek through swamp – a perilous trek that takes weeks, not days.

With no road crossing the gap and connecting the two countries, the teams opt to go around the gap via the Caribbean Sea, instead. 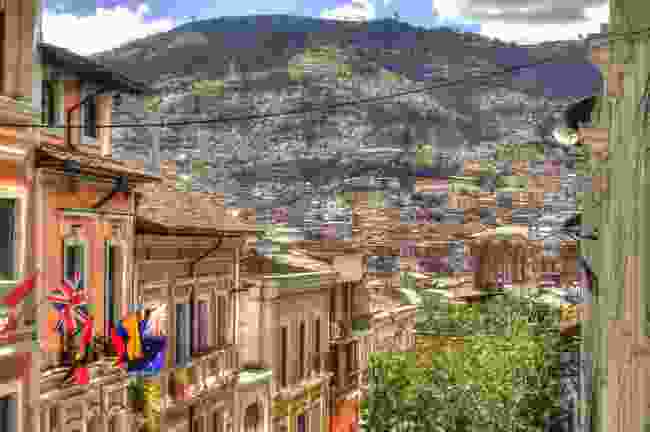 A state of emergency is declared in Quito, Ecuador’s capital, just as the teams are set to make their way there.

Time for a quick change of plan. It’s a real shame, too, as there’s so much to see and do in Quito.

A small tourist town, founded nearly 500 years ago, is the destination for one of the teams racing towards Tatacoa Desert, the first checkpoint.

There’s not much to do here – beyond Tatacoa – though there are some local families with farms, goat herds, and a few religious sites amongst a variety of accommodation options. 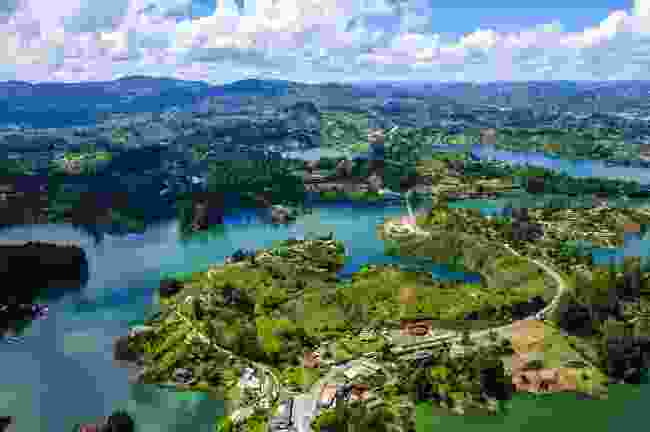 This Andean town in Colombia’s north-west, 79km from Medellín, is one of the country’s most colourful.

It’s also home to the striking El Peñón de Guatapé (Rock of Guatapé). It’s most iconic image is of course the lush, islets weaving in and around it’s reservoir, Embalse Peñol-Guatapé. 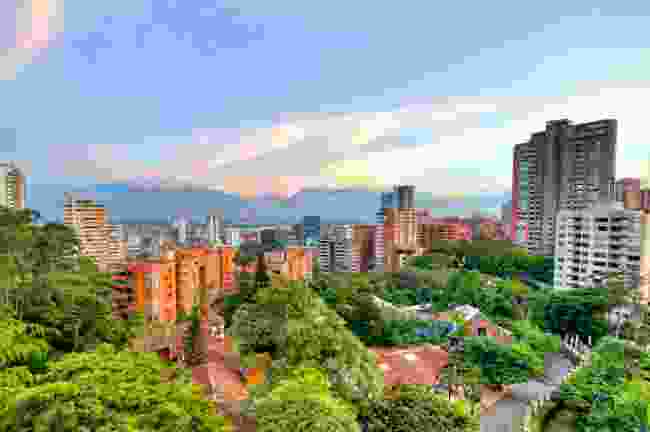 A view of Medellín from above (Shutterstock)

Once known for its high volume of violent crimes, Medellín’s rep has mellowed out dramatically over recent years.

These days, the second biggest city in Colombia is better known for its annual Flower Festival, which brightens up its streets and squares each August, as well as its pleasant weather year-round.

5 things you must do in Medellín

Grand churches, neoclassical architecture and never-ending salsa are just three things Cali, south-west of the Colombian capital, is known for.

It really is the country’s dance capital, so expect an array of salsa bars, salsa classes, musical moments and performances – particularly in the buzzing Juanchito neighbourhood. 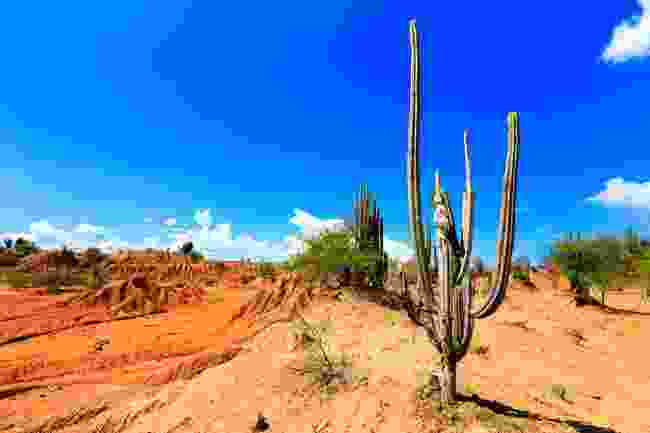 Surprise! The third checkpoint, the Tatacoa Desert, is more than just a desert. It’s officially classed as a tropical dry forest, which may be difficult to believe.

Its landscapes are often deemed otherworldly, and we’d have to agree. For a truly out-of-the-world experience, you must set up there at night – the crystal clear expanse above is South America’s premier stargazing spot.

Huanchaco is located in north-west Peru, and is the perfect place to spend a few days on the beach, hitting the surf and dining on delicious ceviche.

The Inca Trail close by, many travellers eschew a stay in Cusco for the wonders of Machu Picchu.

But this colonial gem shouldn’t be missed, as one of the racer couples finds out. There are plenty of historical sites to explore in the city. 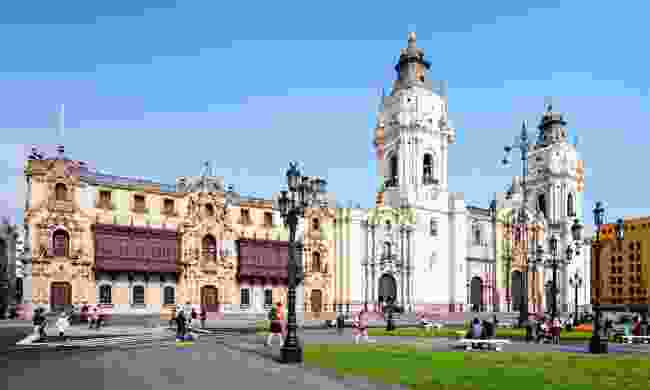 Lima, the Peruvian capital, is well worth a visit, too. Museums, culture, a burgeoning art scene, and streets lined with palm trees await.

It’s one of the world’s driest cities, too, so expect heat and glorious, blazing sunshine during summer.

10 free things to do in Lima, Peru

In Peru’s south-east, the racers hit the checkpoint of Puno, the city resting on the shores of Lake Titicaca.

Here, you’ll be able to experience Peru’s local culture: traditional festivals, folklore, and everyday life on the nearby Uros Islands.

On from Peru towards Bolivia, where some of our racers make a stop in La Paz, six hours away from Puno.

La Paz is elevated on the Andes’ Altiplano (at 3,640m above sea level) and is surrounded by the 6,438m-tall Mount Illimani – a high altitude city break if there ever was one.

The best things to see and do in La Paz 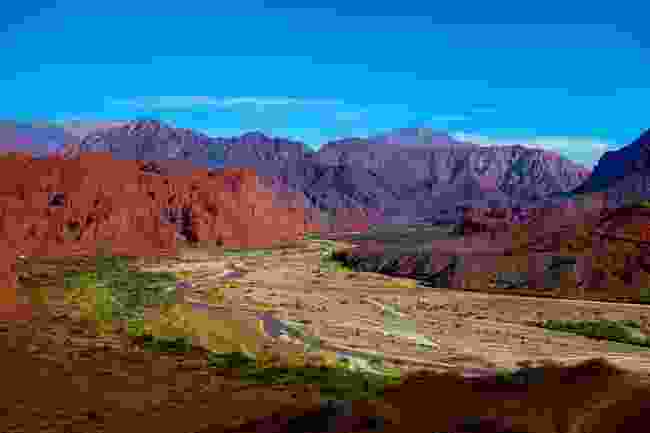 En route to the final destination: Ushuaia, the most southerly city in the world, one racer team makes their way to Salta in the north-west of Argentina.

Expect mix of dusty landscapes, colourful Spanish colonial cathedrals and charming cafes in the city itself, and plenty more to explore in Salta province…

Cafayate is a town in Salta province, and the fifth checkpoint on the way to Ushuaia.

Here, racers marvel at the blood-red rock formations of the surrounding Calchaquí Valleys – and with a bit of time, take a tour (and a taste test) of the local vineyards’ produce. 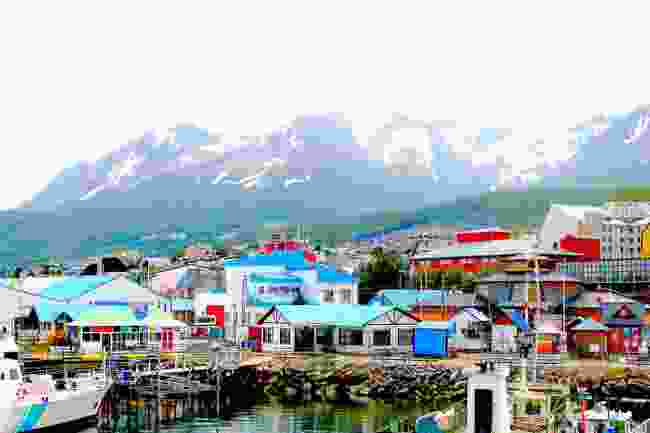 All five teams need to make it to Ushuaia – nicknamed ‘the End of the World’ - in order to complete the race.

Forget the cash prize. Arriving first gives them the opportunity to experience one of South America’s small, intriguing cities, often overlooked by travellers eagerly awaiting their excursion to Antarctica, or return to Buenos Aires.

Hopefully, they’ll have time to get comfortable, explore the picturesque Martial Glacier from up high, and ingesting thousands of years of history, art and shipwrecks in the Museo Maritimo & Museo del Presidio, which comes highly recommended. There’s plenty of wonderful wildlife to meet here, too.

How to spend 24 hours in Ushuaia

Where was Race Across The World series one filmed? 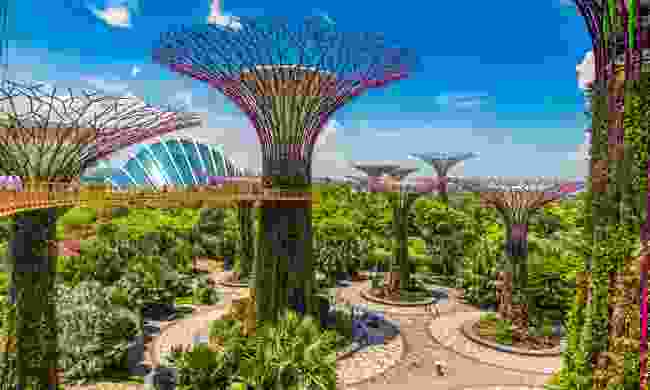 Gardens By The Bay, Singapore (Shutterstock)

The racers from the first season travelled for 12,000 miles, from London all the way to Singapore. It was essential that the teams hit five checkpoints along the way: the historic town of Delphi in Greece was the first, with the fourth century Temple of Apollo its crown jewel.

Where will Celebrity Race Across The World be filmed?

In 2019, the BBC announced that a celebrity special of the show had been commissioned. And while BBC Two’s Race Across The World is set to air as normal in March 2020, US-based entertainment industry news site Deadline recently reported that filming of the celebrity series - to air on BBC One - might be put on hold.

However, the BBC has confirmed to us that this isn't the case. Filming hasn't been postponed, and will go on as normal. Where that filming will be? Only time will tell. But for now, turn over to BBC Two or iPlayer to enjoy Race Across The World, starring regular-old travellers, just like us…

9 eye-opening environmental docs worth a watch

Where Judi Dench went on her Wild Borneo Adventure