From empty shingle and sand beaches to Victorian iron lighthouses, Sarah Guy reveals five simply capital days out on the coast near London. 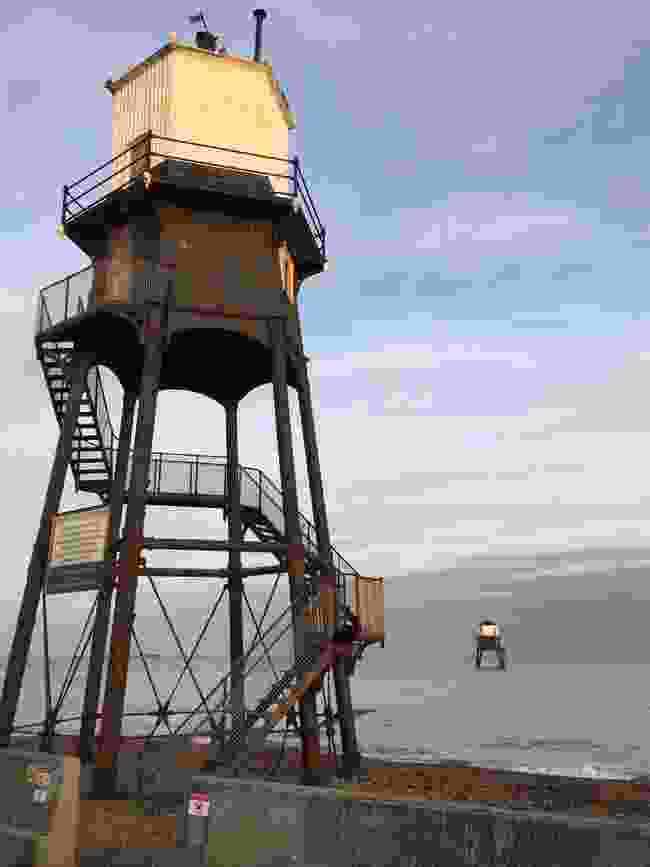 Although it’s just across the water from the busy Port of Felixstowe, Dovercourt is a very different town. The resort has acres of sand washed clean with every tide, adorned by two magnificent Victorian iron lighthouses. The shoreline is strewn with shells, pebbles and seaweed, and there are lots of sea birds: turnstones dart about, and sanderlings swoop low.

Along the promenade there are beach huts, cafés and lots of family-centred amusements, but really this is a beach made for sandcastle-building and shell-collecting. Dovercourt’s low-key shops and cafés can be found in and around Main Road – just look for the imposing statue of Queen Victoria and head inland.

If it’s a walk you’re after, continue on the coastal path into marshland and mud flats, or take the Essex Way long distance path into the countryside to Wrabness and Manningtree.

Quiet, unassuming Hythe is full of surprises. St Leonard’s ossuary, containing more than 1,000 skulls, is the most disconcerting, whereas the tin chapel (now the Tin Tabernacle arts centre), is simply a visual treat, and who doesn’t want to ride on the Romney, Hythe & Dymchurch Railway? (It goes all the way to Dungeness.)

The layout of Hythe is out of the ordinary, too – the town is bisected by the Royal Military Canal, a sleepy waterway which makes a great town-centre or long-distance (28-mile) walk. The high street is one side of the canal, the beach is on the other.

The promenade runs in a straight line all the way from Sandgate until it comes to an abrupt end at Fisherman’s Beach, where the small shore-based fleet and a handful of black-painted huts give way to a couple of Martello towers and the forbidding Hythe Ranges (a Ministry of Defence firing range). 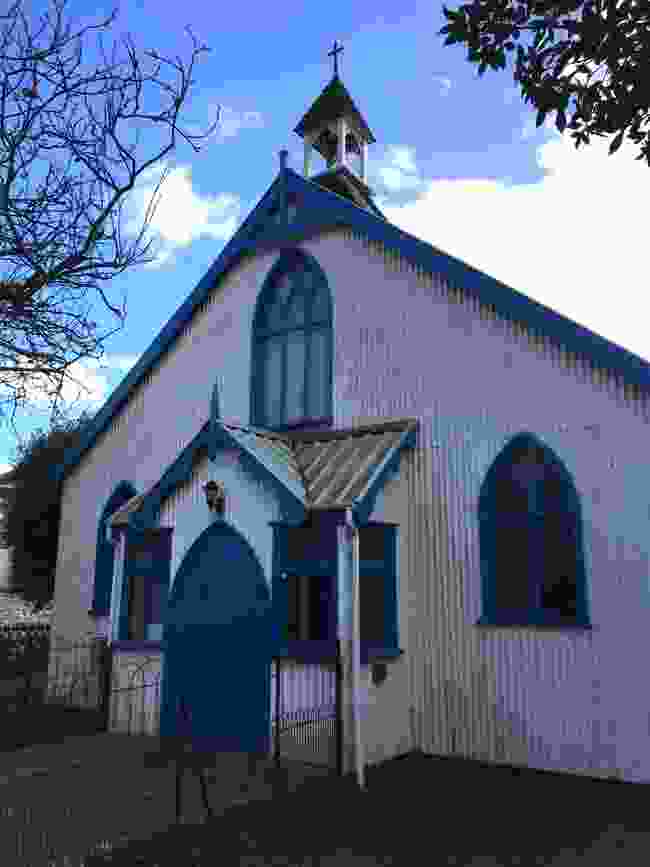 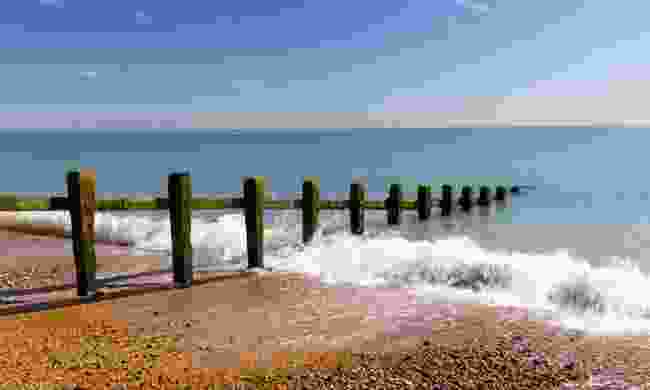 The groin at Pevensey Bay (Dreamstime)

Looking at the simple shingle and sand beach, lined with weathered wooden groynes, it’s hard to imagine that the course of English history changed dramatically here when William the Conqueror landed in 1066. The wider view takes in the cliffs at Hastings in the east, round to Eastbourne Harbour in the west, with Beachy Head and the Downs in the distance.

Off-season, the beach can be almost deserted, apart from dog-walkers and birds. There are a couple of year-round beach cafés, and an ice-cream kiosk in season. A hotch-potch of dwellings includes Edwardian villas, Martello towers, bungalows, static caravans and a 1930s beachfront marvel, the Sandcastle. Just inland – follow the footpath across the fields to Pevensey – is a romantic-looking medieval castle, and the prospect of a contemplative walk through the Pevensey Levels marshlands. 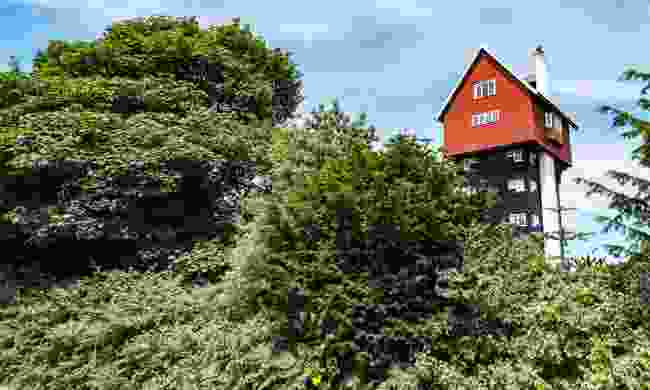 House in the Clouds (Shutterstock)

This picture-book village by the sea is its own little world, and quite unlike other resorts. It owes its existence to Glencairn Stuart Ogilvie, who built the village as a holiday playground in the early twentieth century. It’s full of quirky buildings, most notably the House in the Clouds (built as a water tower), but there’s also a windmill and plenty of idiosyncratic faux Tudor and Jacobean houses to marvel over (and stay in); the black-painted wooden cottages along Uplands Road are charming, too.

One striking twenty first-century addition is the Dune House on the beach, built by Living Architecture. The beach is mainly shingle, colonised in places by some impressive greenery – sea kale, campion, sea pea, sea spurge and even some rosehip bushes – but untouched by ice-cream kiosks. In winter, it’s fabulously bleak. 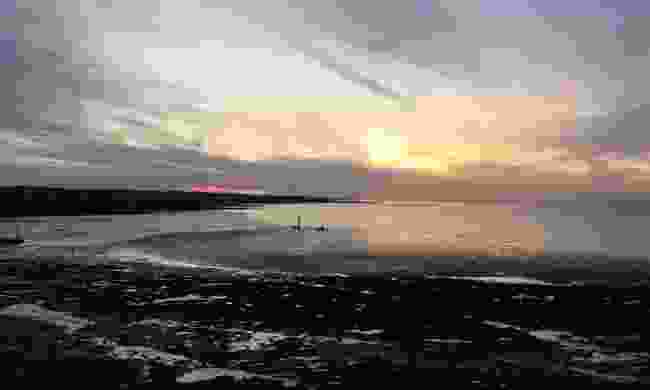 Westgate’s architectural legacy gives the place a very different look to other local resorts. Conceived in the 1860s as an exclusive holiday resort, Westgate-on-Sea Estate, the town retains many handsome Victorian and Edwardian buildings. The main drag, Station Street, is given charm by the canopied shops and the splendid Carlton cinema, a Swiss-Gothic construction that originally served as the town hall.

Westgate was also the site of the first bungalow in England, built by John Taylor; he built more in nearby Birchington-on-Sea, where one Grade II listed example survives. Standing on the grass-topped cliffs, it’s obvious why developers chose the site. The two bays, St Mildred’s and West Bay, have great stretches of sand, equally good for long walks with a dog in winter or playing beach games in summer. 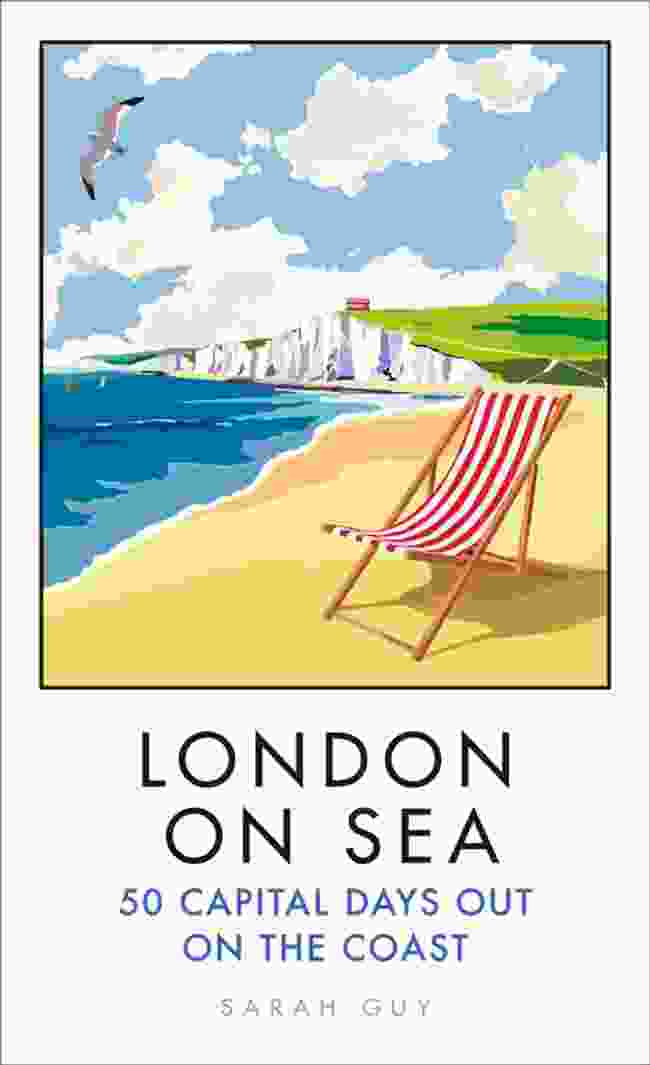 Sarah Guy is the author of London On Sea, an inspirational illustrated guide to 50 coastal days out, all within easy reach of London. You can order your copy on Amazon now.