9 uplifting wildlife and conservation stories we all need to read

Hidden between coronavirus news updates are a few positive stories about sleeping lions, multiplying koalas and even species coming back from the brink of extinction. Let's have a read...

Turning on the news at the moment can feel rather bleak, as the entire globe rightly focuses solely on the COVID-19 pandemic.

However, there is some good news out there, to brighten our moods and keep spirits high. It's a trying time for the travel industry, but there's still positive travel news to share. Likewise, people may be locked down, but they're creating the uplifting news stories themselves.

Let's add some good news from the world of wildlife to the mix...

1. It's been a great year for wild koalas in the You Yangs, Australia 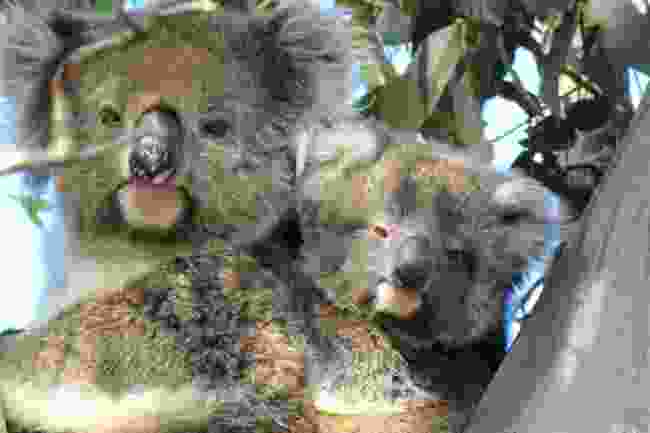 Two of the You Yangs' wild koalas (Echidna Walkabout)

Following the devastating bushfires that swept through Australia in early 2020, it feels miraculous to hear about a region that escaped the brunt of the blaze.

You Yangs mountain range in Victoria, and its population of wild koalas, have remained undisturbed. As such, there's been plenty of time for a few new wild koala joeys to be born.

Tour operator Echidna Walkabout keeps a close eye on the population in the region, and reports that six joeys have been born - all of whom are around three months old, still tucked inside their mothers' pouches. There are two more on the way, too.

Keeping records since 2006, Echidna Walkabout tell us that 2020 has the best year yet for koala births. Such welcome news!

2. The number of black rhinos is slowly but surely increasing 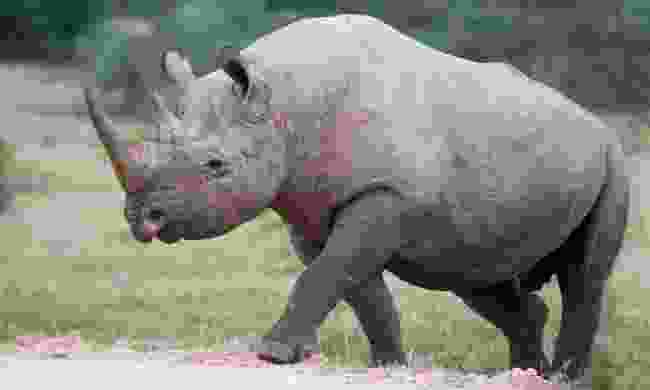 Over in Africa, there’s some hope for one of the world’s most endangered animals: the black rhino. It was recently announced that numbers of these incredible creatures are slowly but surely on the rise.

This annual increase of 2.5% over six years may feel like slow progress, but it is progress nonetheless. A conservation story certainly worth smiling about.

3. Giant pandas have been making the most of their new-found privacy 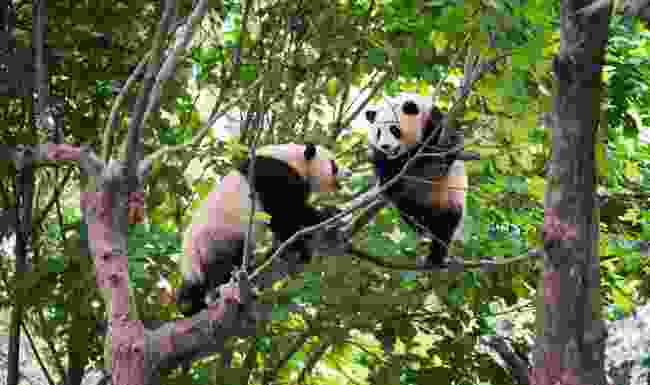 After living together in a Hong Kong zoo for 13 years, two giant pandas - Ying Ying and Le Le - made the most of the privacy afforded by the lockdown and successfully mated for the first time.

With giant panda mating season only lasting a few days, the zoo had been struggling to get the couple to show interest in each other since they first moved in together in 2007. In fact, mating in pandas - both in rescue centres and in the wild - is so low, it's partly why they're currently on the vulnerable species list.

This news is cause for celebration in itself, though we'll have to wait a little while longer to know if any baby pandas are on the way. Fingers crossed.

4. China has begun to crack down on the illegal wildlife trade 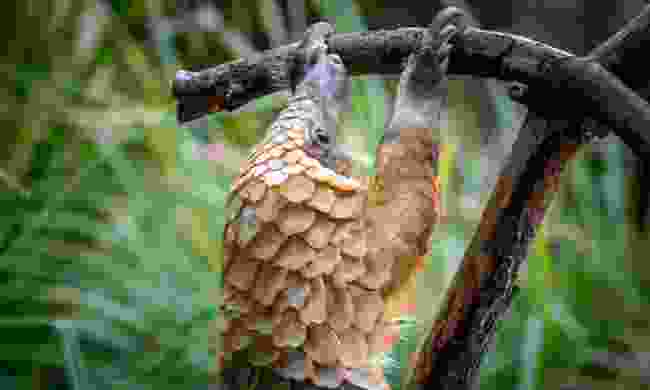 Countries are banning the trade and consumption of wild animals, including pangolins to help fight COVID-19 (Shutterstock)

Let’s not forget that the coronavirus pandemic is believed to be the direct result of the wild animal trade. The good news is, that to help fight the virus, China has now made it illegal to trade and eat wild animals.

Not only will this help to save the life of numerous species - badgers, pangolins and even turtles among them - but the hope is that other countries will soon follow suit. Vietnam is one of the countries said to be considering this vital change.

5. There are countless wildlife livestreams available to watch 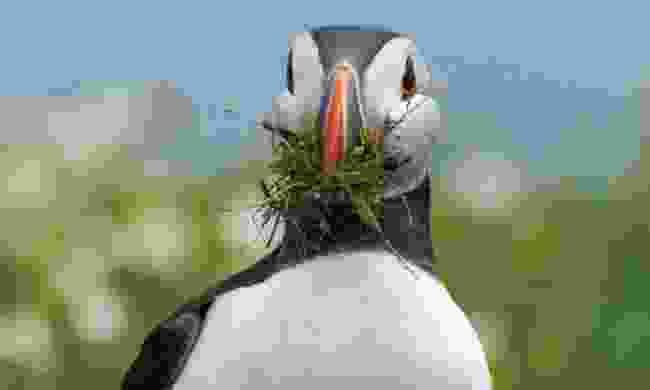 See puffins from your own home (Shutterstock)

If your wanderlust is wildlife-orientated, you may be feeling down about not being able to see the world's wildlife in their natural habitats.

Well, no need to fret. Watch one of these livestreams instead, and you'll be comforted that the conservation efforts and rescue centres are still operating around the world. Wild and protected animals are continuing to go about their daily business!

Here are our favourite wildlife and nature-themed livestreams

6. A type of eagle has come back from extinction in England

240 years ago, the white-tailed eagle went extinct in England. Now, miraculously, the giant birds of prey have decided to return to the country.

The huge eagles, with a whopping 2.5m wing span, were spotted sweeping over the North York Moors, flying a distance of over 400km to get there. Undoubtedly, a sight that was bound to put a smile on the face of the people who spotted them.

7. Fin whales are coming closer than ever to Calanques National Park

In the Mediterranean sea of Marseille's Calanques National Park, a team on patrol were absolutely floored to capture footage of two fin whales, happily playing nearby.

In typical times, it would be remarkably rare to receive a visit from these majestic (and huge: 18m to 20m long) whales so close to the park. But these aren't typical times. Naturally, it's thought that the absence of people sailing the seas is the cause.

The park shared the footage on social media, tweeting: "This observation of the second largest animal in the world is an indication of the potential effect of confinement on the behaviour of wildlife."

8. Suddenly, it's safe to snooze on the road in South Africa 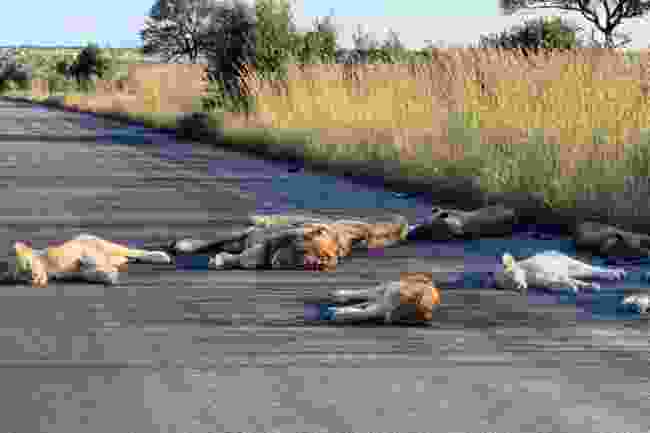 If you're one of the majestic lions of Kempiana Contractual Park, that is!

This pride, usually not visible to visitors of Kruger National Park in South Africa, was spotted brazenly laying in the middle of Orpen Rest Camp's road, enjoying a coordinated midday snooze, presumably due to the lack of cars and people passing by.

These photos were taken by - no doubt stunned - section ranger Richard Lowry, according to Kruger's official Twitter account. What a sight.

Here are 13 other times animals took over during lockdown

9. Turtles are having no problem travelling 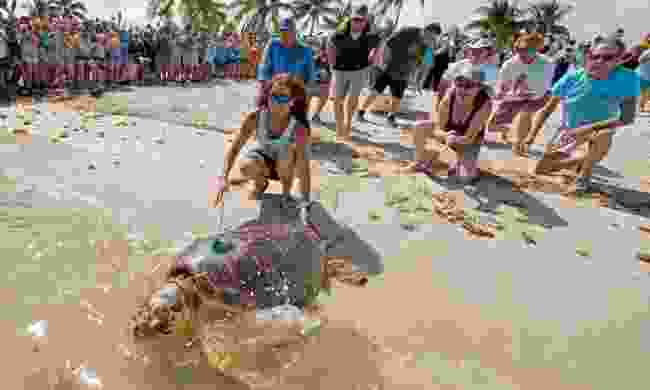 The rescued turtle being released with a tracker

We might not be able to travel very far at the moment, but a rescued turtle from Florida Keys has managed to travel quite a distance despite the lockdown measures!

The male turtle had been rescued by The Turtle Hospital in Marathon, Florida Keys where he was given surgery to remove a fish hook from his back. The operation was a success, and this time last year, on May 7 2019, the turtle was released back into the sea with a tracker placed on him.

Remarkably, a year later the turtle has now managed to travel over 1,600 miles, swimming his way around Florida's West Coast.

13 inspiring sights from the world's lockdown