The hours are ticking away until we announce the results of the our 2013 Travel Photo of the Year competition. In the mean time, we catch up with last year's winners, who share the secrets of their success and reveal what they learned from their incredible prize: a photography expedition to the wilds of Papua New Guinea.

What was it like knowing you’d beaten off stiff competition to win the Photo of the Year competition? How did you feel?

I was shocked when I saw I had won the wildlife category. I originally thought there was a mistake when I saw my picture as the winning shot. I though they were rotating through all the finalists but then I realised it had won. I still can't really believe it!

How did you prepare for your trip to Papua New Guinea?

I tried to research it on the internet but information was limited. I spent ages debating what lenses to take. In the end I found a forum where someone had been to Papua New Guinea and said that the birds of paradise [which I was interested in photographing] lived high in the tree tops meaning he had been unable to take any photos of them. So I decided not to take my big lens and to focus on photographing people, which is something I haven't done before. I then spent a long time researching travel photos and photos of tribesmen and women so I had an idea of the images I would like to try and get. 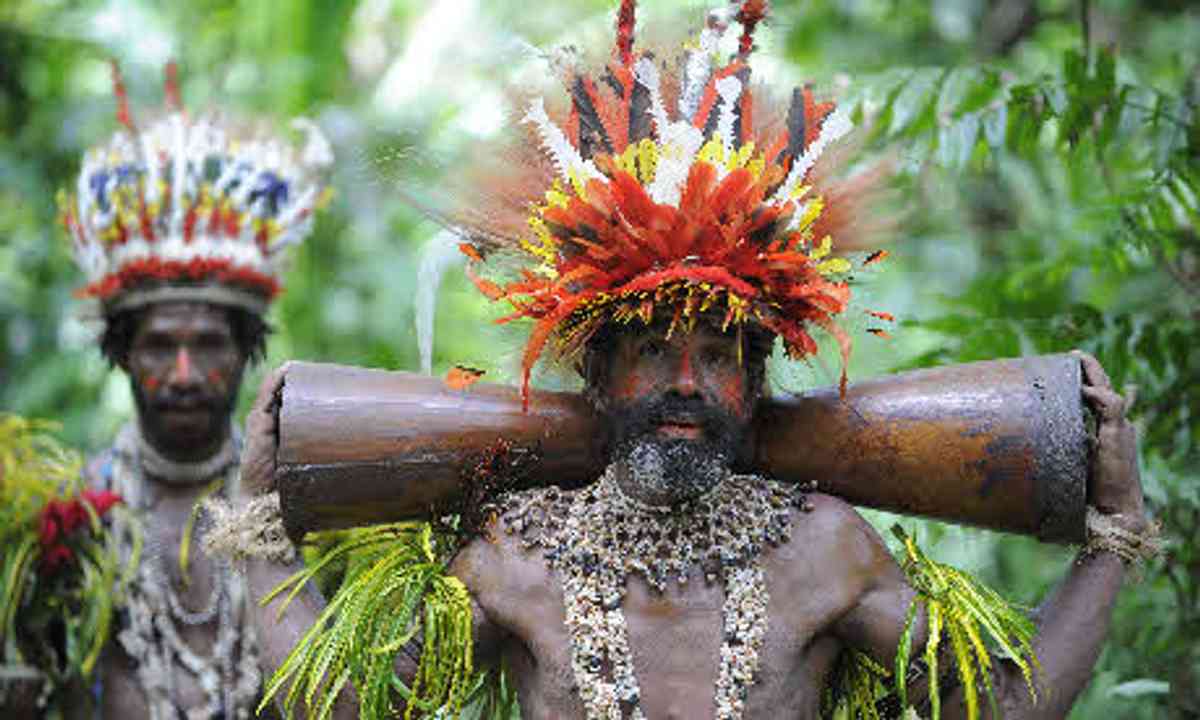 What was the highlight of the trip for you?

The highlight of the trip for me was going down a fjord in the Tufi region on a raft through the mangroves to a beautiful area full of Sago plants and butterflies (some of which are 30cm across). This was our raft guide, Jeff's, land and we were shown Sago making and fire lighting. Jeff told us how he had given up living in Port Moresby for life here. He comes down to this area every day, lives off the land, and provides for his family. It is a hard life but rich in rewards as it is a beautiful place.

What are your top tips for travel photography?

Have your camera ready as you never know what you might see. Taking a video instead of a photograph can definitely give you a better reminder of your time there. Remember your memory cards! 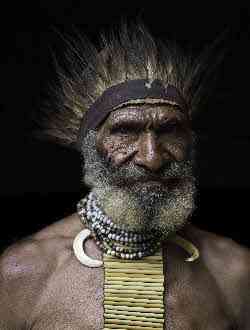 My favourite image of the trip is an image of a tribesman from Tokua Village. He is an elderly gentleman with a face full of character. It is a simple image with him set against a dark background. For me it just captures his spirit. As we all stood there taking photos with our modern technology he just stood there with a face that had seen so many changes in his country during his lifetime.

Did you learn anything new about photography whilst on the trip?

I learnt that I could definitely benefit from learning more about my camera and the things that can be achieved with it. That is thanks to Kyaw Kyaw (another of the winners) who achieves amazing results from his camera settings. He knows his camera inside and out. I have buttons that I never know what they do!

Any words of wisdom for those thinking of entering Wanderlust’s Photo of the Year in future?

Be creative. If you have the time with a subject, try different things to capture the mood or essence of the moment.

You won the Wildlife category – what was it like photographing the wildlife in Papua New Guinea?

Birds of paradise and tree kangaroos were what I really wanted to see. They are both challenging as they live in dense forests. Tree kangaroos are nocturnal; I didn't manage to see one of those. Birds of paradise live high in the tree tops. While I was at Mount Hagen I got up early and went on a trek with a local guide. A guide is essential. He knew where specific birds displayed and at what times and could identify the different bird calls. It was misty on the top of the mountain and, with the dark forest, photography conditions were not ideal. I managed to get a photo of a brown sicklebill (a bird of paradise) in flight. I also saw a king of saxony and a splendid astrapia (birds of paradise). They were tantalisingly close but always too far!

What was it like knowing you’d beaten off stiff competition to win the Photo of the Year competition?

I live in Myanmar so it’s very difficult for me to participate in European photo competitions. When I found out I had won two prizes in the competition, I couldn’t believe it. I thought I was dreaming.

What are your top tips for travel photography?

Get good information about the trip and the destination before you go to make sure you're carrying the right camera and the appropriate equipment.

My favourite images that I captured in Papua New Guinea are the portraits of local tribe people. I am very interested in their lifestyle, culture, clothes, make-up and emotions. 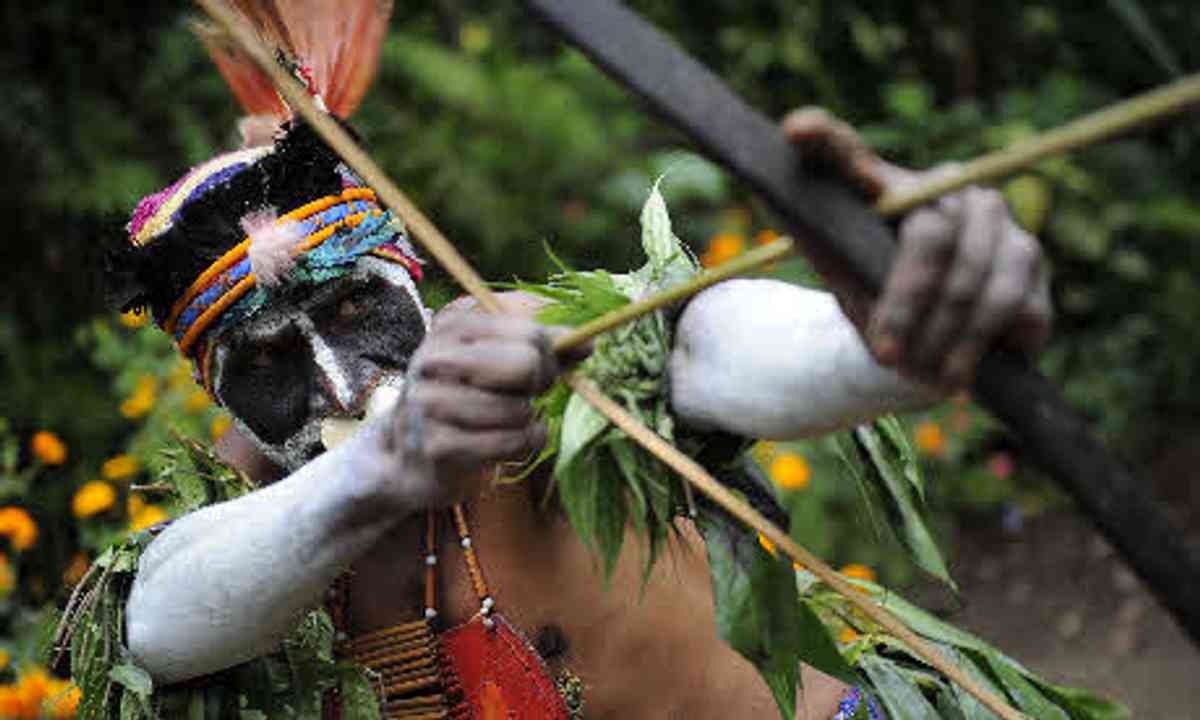 You won the people category and were runner in the landscape category – how  did you find photographing the people and landscapes of Papua New Guinea?

I really enjoyed photographing the people of Papua New Guinea. They were great photo subjects. The landscapes of Papua New Guinea are similar to my country. But the seascapes are different and make great photos. I captured many clean, beautiful and amazing seascape photos on this trip. I am sure you could take wonderful underwater photos too. 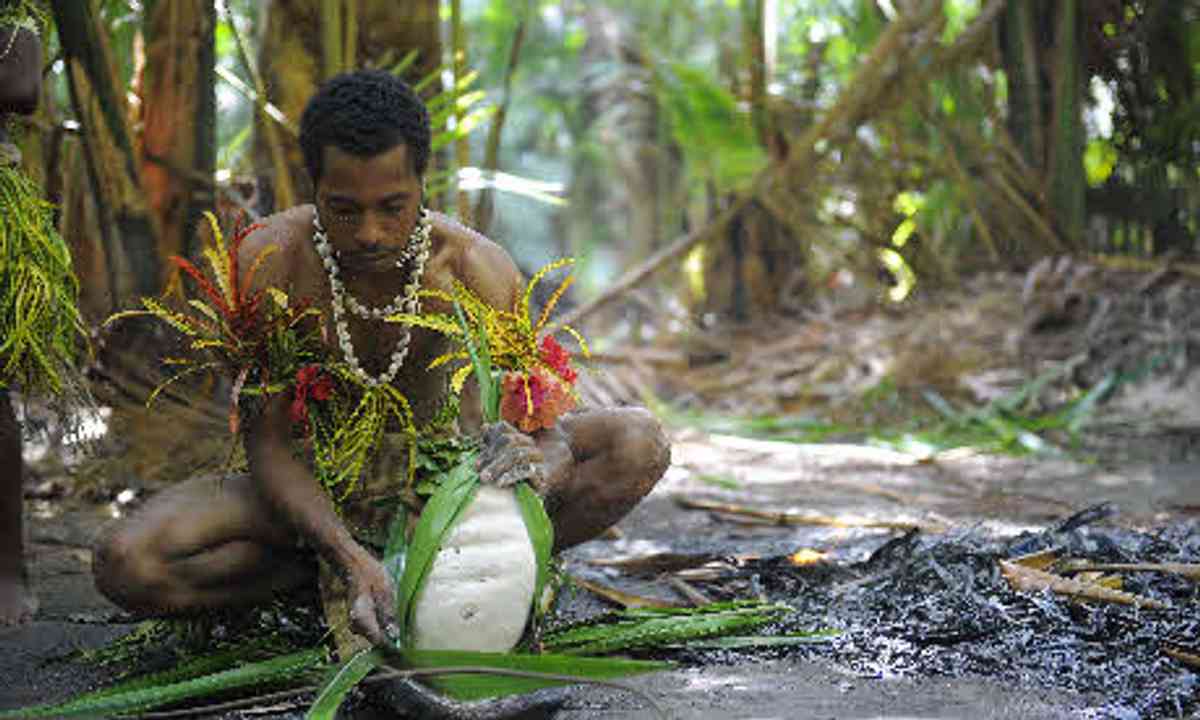 [The winner of the Icon category, Marius Gheorghe Musan, was unable to attend]

How did you prepare for your trip to Papua New Guinea?

I already had some knowledge of the country through work – the department I work for in UCL had a research project based in PNG. I also watched an excellent documentary called ‘First Contact’ which documented the expedition by the Leahy brothers into the Waghi Valley in the 1940s. As our trip included staying in the Waghi Valley (Mount Hagen) it was really interesting to see the history of the area and how much has changed in the years since.

What were your first impressions when you arrived in Papua New Guinea?

My first real impression when arriving in Mount Hagen was the number of people standing around everywhere. It was quite strange but common as employment levels are quite low and most people are involved in agriculture. Getting used to them staring at you was strange at first. However, as soon as you smiled at them and waved their faces lit up and you always got a big grin and a wave back. In terms of the culture and villages, it was easily the most interesting place I have visited.

How does Papua New Guinea compare to other places that you’ve photographed?

PNG was completely different. All the locals wanted their photo taken and showing them the result on the camera display seemed to provide endless entertainment! I have found on trips to other parts of the world that people would always ask for money when taking their photo, but this does not happen in PNG. The landscape was also stunning – being so undeveloped it felt like you had stepped back in time, especially on the coast. There were no roads, the locals generally used traditional wooden canoes to get around, and this created fantastic photography opportunities. 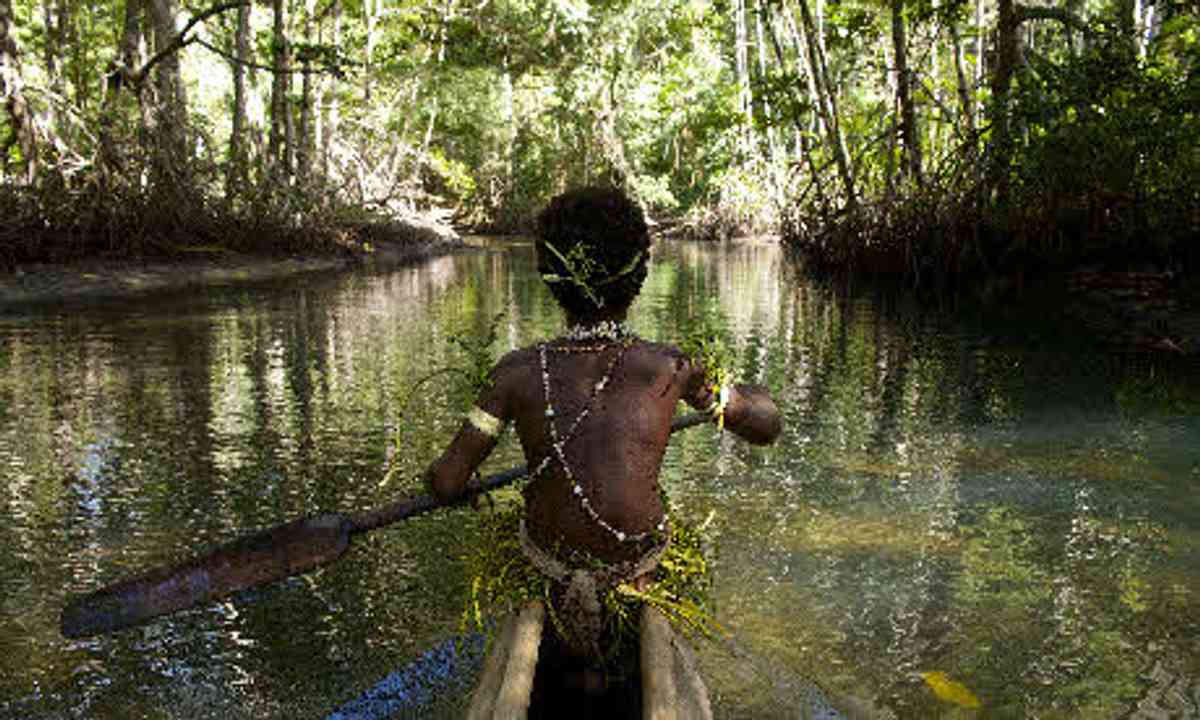 What was the highlight of the trip for you?

Nem Village in the Highlands was definitely one highlight. We were greeted by the village elder, Andrew Rumunts, in his traditional dress and the village demonstrated some aspects about their traditional life – courting, singing, and cooking.
What are your top tips for travel photography?

Just keep snapping. Of the huge number of amazing travel photos I see, a lot of them are taken spontaneously. Being able to capture that unique moment can come and go so quickly so it's best to keep clicking away.

I have two favourites – a portrait of a villager in Nem Village, the young man was wearing traditional dress and face paint. He seemed very interested in the photos we were taking. At one point we turned around and he had produced a mobile phone from his traditional dress and was taking photos of us! Technology is creeping into the traditional way of life. 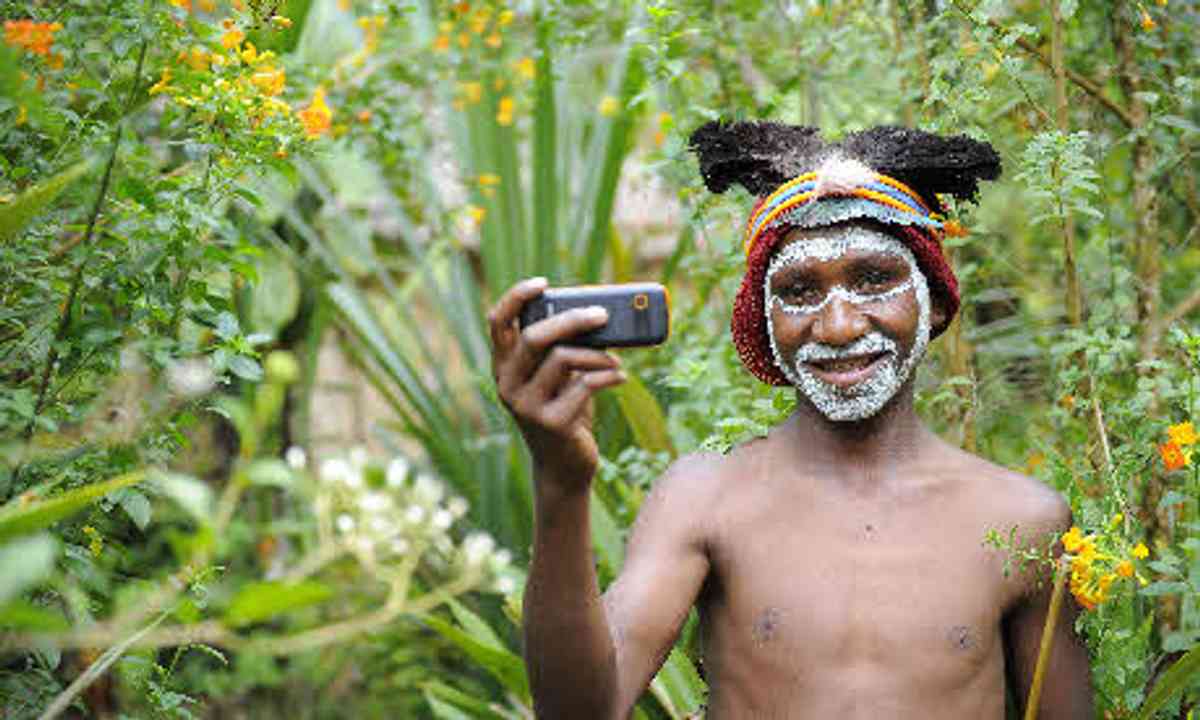 The other favourite is of the boys jumping off their canoe into the sea at Bawame Village. The sea in the area was beautiful, so clear and the coral reef was pristine. I managed to go snorkelling in the same bay as the photo and the fish and reef were the best I have seen, absolutely teaming with life! 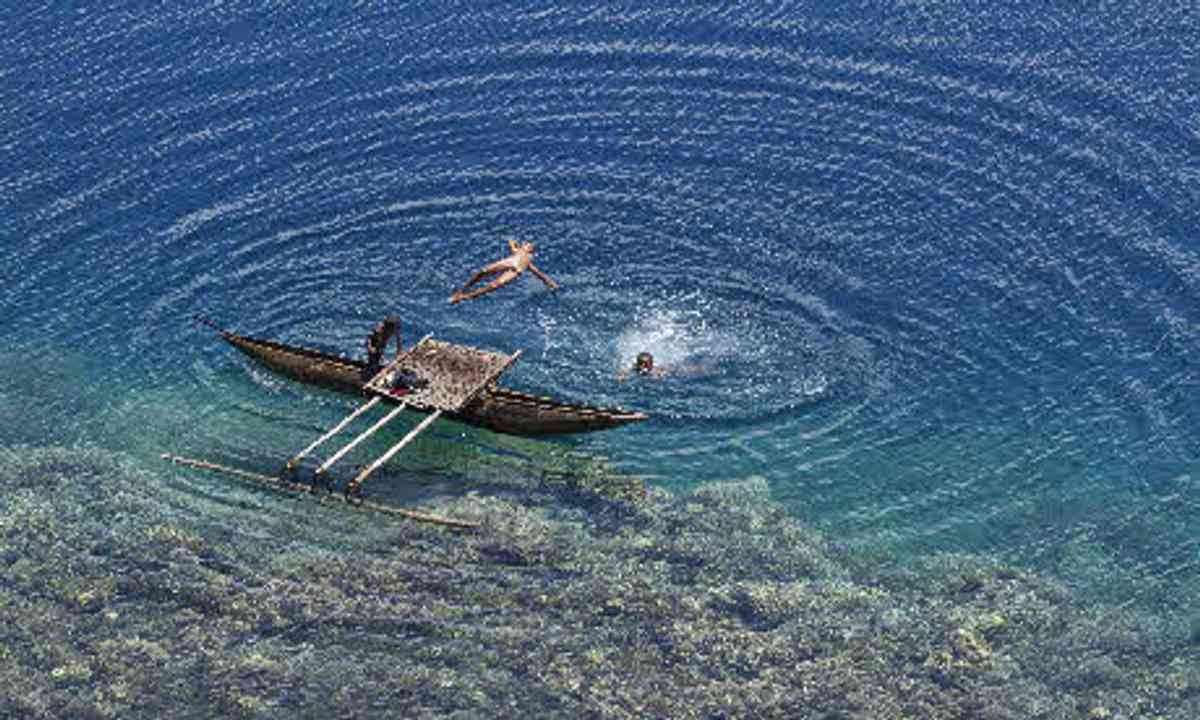 Did you learn anything new about photography whilst on the trip?

I hadn’t previously had much experience with portrait and people photography, I have usually focused on landscapes and scenery. It was the perfect place to learn about photographing people and it certainly helped that everyone wanted their photograph taken. Being with other photographers allowed me to get ideas and learn how best to approach people photography. Kyaw Kyaw was excellent at moving people around to pose for photos!

Any words of wisdom for those thinking of entering Wanderlust’s Photo of the Year in future?

This was the first time I had entered the competition and I thought carefully about the photos I was entering. With Travel Icons I wanted to enter an image which showed an unusual view of a recognisable place. Try to think of photos which will stand out to the judges. When you think that there are 8,000 entries, having an image that stands out is vital!

The shortlisted finalists in our 2013 Travel Photo of the Year competition have been announced. Let us know what you think via the comments section and join us at the Destinations: Holiday and Travel Show on Friday 7 February when our panel will announce the winners! There will also be an opportunity to cast your own vote at the show for the visitors' choice.