Island hopping in the Philippines

Head to the 7,107 beach-fringed, tourist-free isles of the Philippines for a glimpse of untouched South-East Asia

The sun had melted like mango ice cream on hot coconut pie as I strolled to a beachside restaurant, reflecting on a morning snorkelling with green turtles in the warm, aquamarine ocean – it had been a perfect day in paradise.

Palm-fringed Siquijor Island delivered the sort of exotic cocktail that makes South-East Asia so popular with travellers. Bleached-white sandy beaches, vibrant coral reefs, abundant fresh fruits and gentle people with a heritage fused from long-held island beliefs and the distant aspirations of 16th-century Spanish mariners. Yet something was missing... 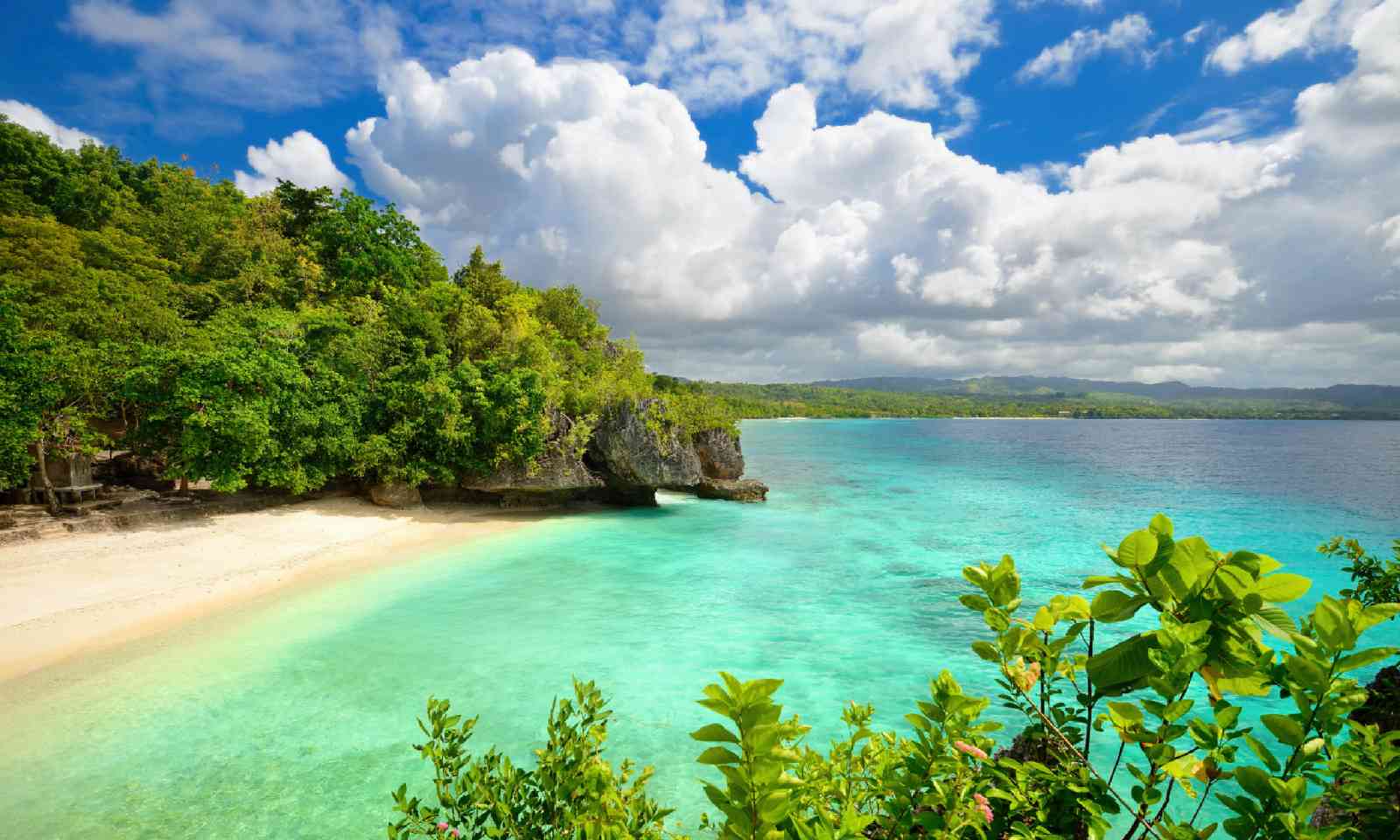 Throughout several weeks travelling around the Philippines I’d only met a handful of non-Asian tourists. From Thailand to Singapore, visitors follow well-trodden trails across South-East Asia, yet comparatively few cross the South China Sea to the Philippines.

The Philippines has never been easy to grasp. It isn’t compact like Thailand, but made up of 7,107 diverse islands sprawled across a huge tract of the Pacific Ocean. Dozens of ferries and hundreds of buses depart Manila every day for all corners of the islands. I felt thoroughly daunted by the prospect of trying to capture a representative flavour of this archipelagic nation in two short weeks.

Our man in Manila

First challenge, however, was Manila. The capital’s reputation doesn’t do the Philippines many favours and almost everybody I’d spoken to before my journey warned vaguely of its dangers. Such dystopian views unfairly oversimplify ‘Metro Manila’, which is actually 17 very different cities that have coalesced into one megalopolis on Luzon Island. “I want to show you there are many faces to Manila; the old and the dirty but also the new and the rich,” said theatrical Juanita, my city guide.

This American influence is pervasive. I lost count how many times I was hailed “Hello [GI] Joe”. The historic bond with the US was reinforced after General MacArthur liberated the country from Japan in 1945, and written in stone at the Manila American Cemetery near Makati where 17,000 white crosses remember fallen GIs. Later, driving along Manila’s intravenous Roxas Boulevard, we saw Filipinos gathering outside the monolithic American Embassy seeking visas for better economic lives. “A queue of dreams,” reflected Juanita. 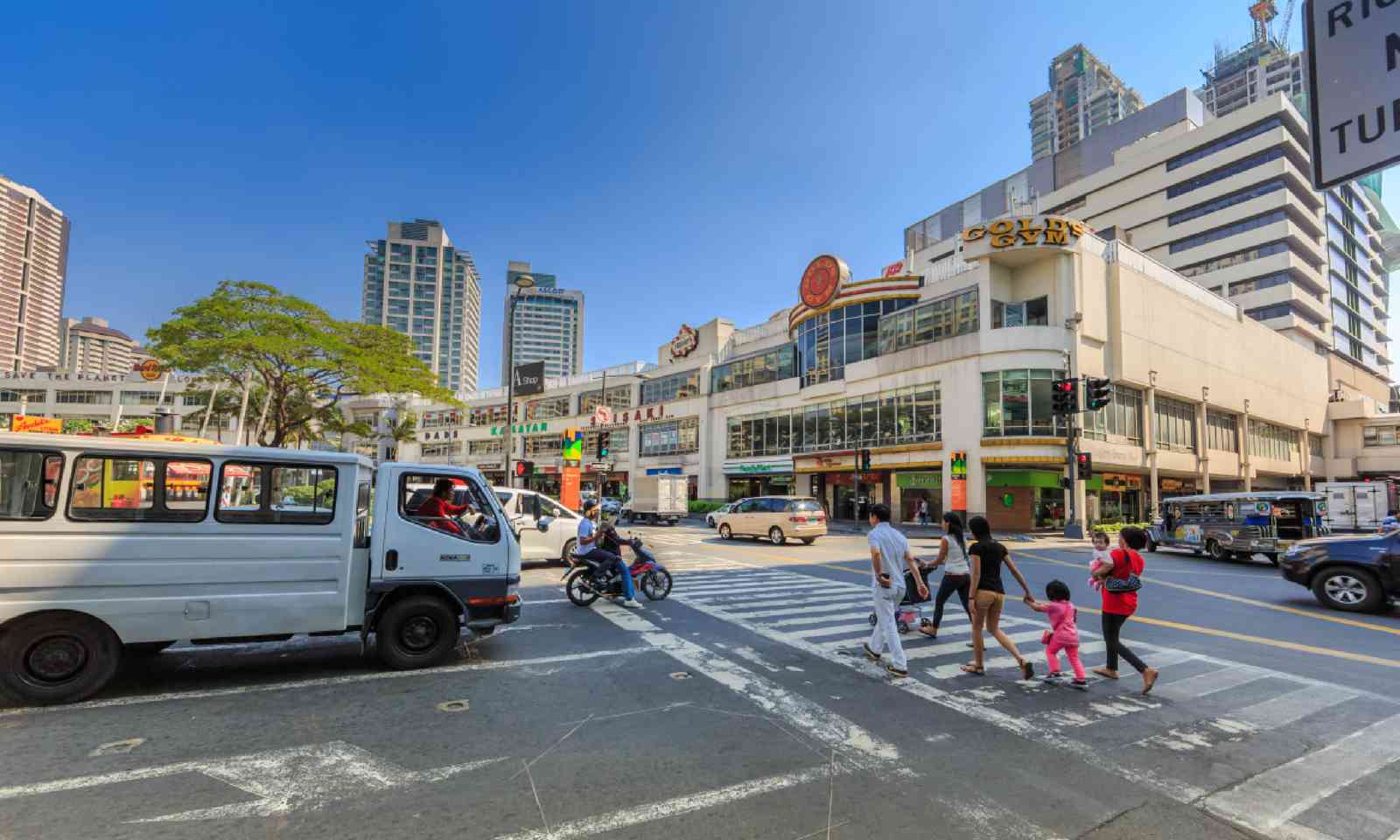 Some of these hopeful migrants may have hailed from along the Bay of Manila’s crowded, ramshackle districts that paradoxically host many of the city’s five-star hotels. Gritty Ermita has turbocharged energy.

We passed cockfighting pits and go-go bars; ate prawns fried in tempura batter at a seafood dampa (a wet market where you select your fish and then take it to a stall to be cooked), and sat in uproarious traffic jams of horn-honking chrome jeepneys (hybrid jeeps) bearing bravura names such as ‘Street Fighter’.

The pace slackens around Intramuros, a district of Spanish colonial heritage, with a church dating back to 1587. Then the streets disappear into the Quiapo district where Juanita and I walked to a basilica where a packed congregation fanned themselves in drenching humidity and mumbled prayers towards an altar constructed around a miracle-inducing 18th-century Black Nazarene icon.

“They pray for good health and jobs abroad so they can send money back home,” whispered Juanita. And the old ladies in rows of plastic chairs, I asked?

“They will pray for you if you pay them,” he laughed. This sense of fun and enterprise would characterise everything I was to enjoy about Asia’s only predominately Catholic people during my stay.

After several trouble-free days in Manila weighing up my options I finally departed with a plan. Travel would prove universally easy as there is always something going somewhere: ferries, outriggers, ro-ros (‘roll-on, roll-off’ barges), buses, tricycles, jeepneys, multi-vans, hable-hable motorbikes. Setting off for northern Luzon Island I plumped for the only other destination outside of Manila I’d heard about, the rice terraces of Banaue – routinely dubbed the ‘unofficial eighth wonder of the world’. 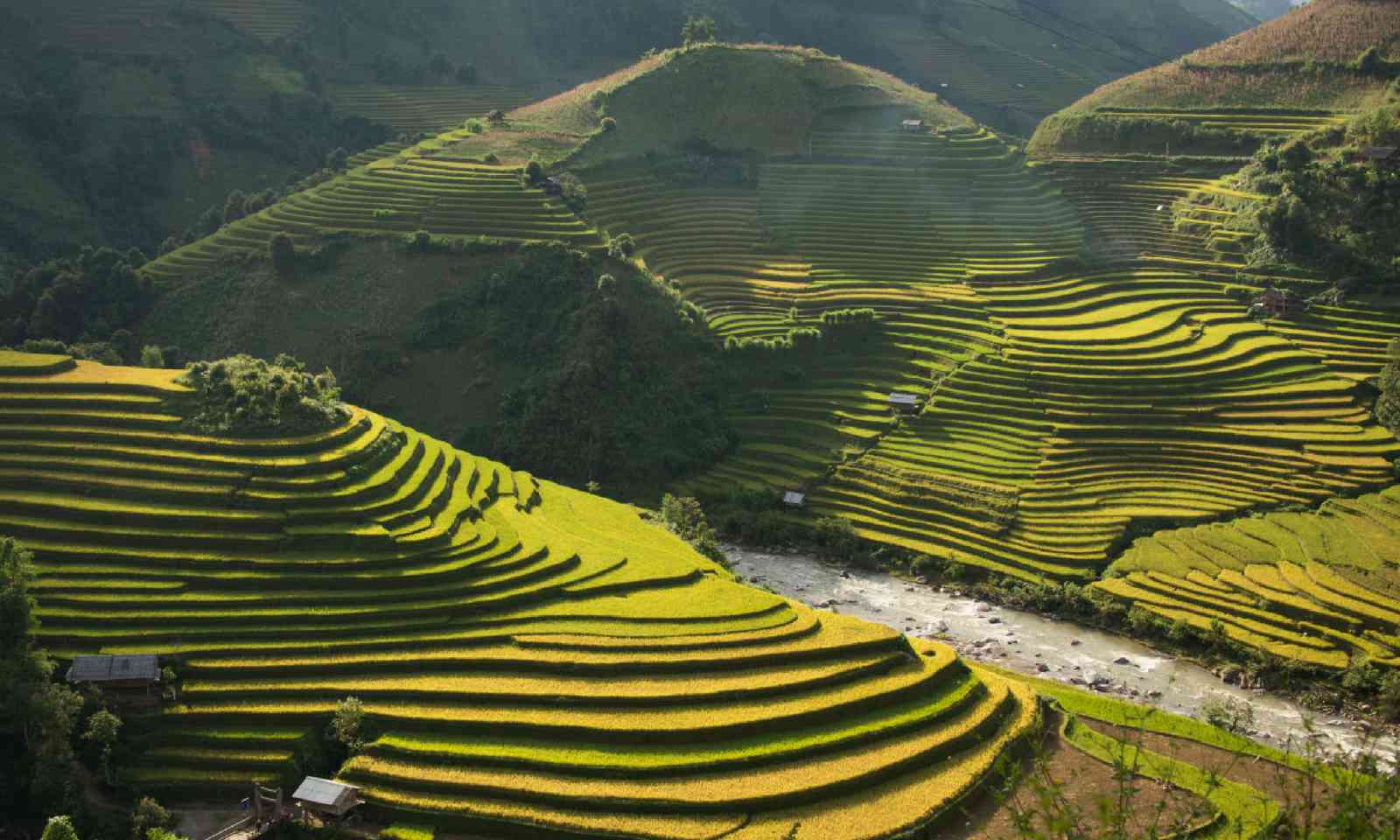 The terraces couldn’t have been more dramatic: a recent cyclone had left bruised skies and coffee-coloured scars in the earth while the stepped mountain slopes of the chartreuse-green rice terraces, some thousands of years old, plummeted several kilometres out of billowing clouds like a stairway from heaven.

From the rice terraces, every day I travelled became a journey through new cultures and wildly differing landscapes. A nerve-jangling three-hour jeepney ride the following day, over Banaue’s chilly mountainous Cordillera, took me into gnarled limestone gorges where the Sagada people suspend the coffins of their dead from prominent cliffs. Several days later, in southern Luzon, sweltering heat and pyramidal volcanoes replaced cool mountains in a picture-perfect tropical landscape blanketed by swathes of coconut palms. 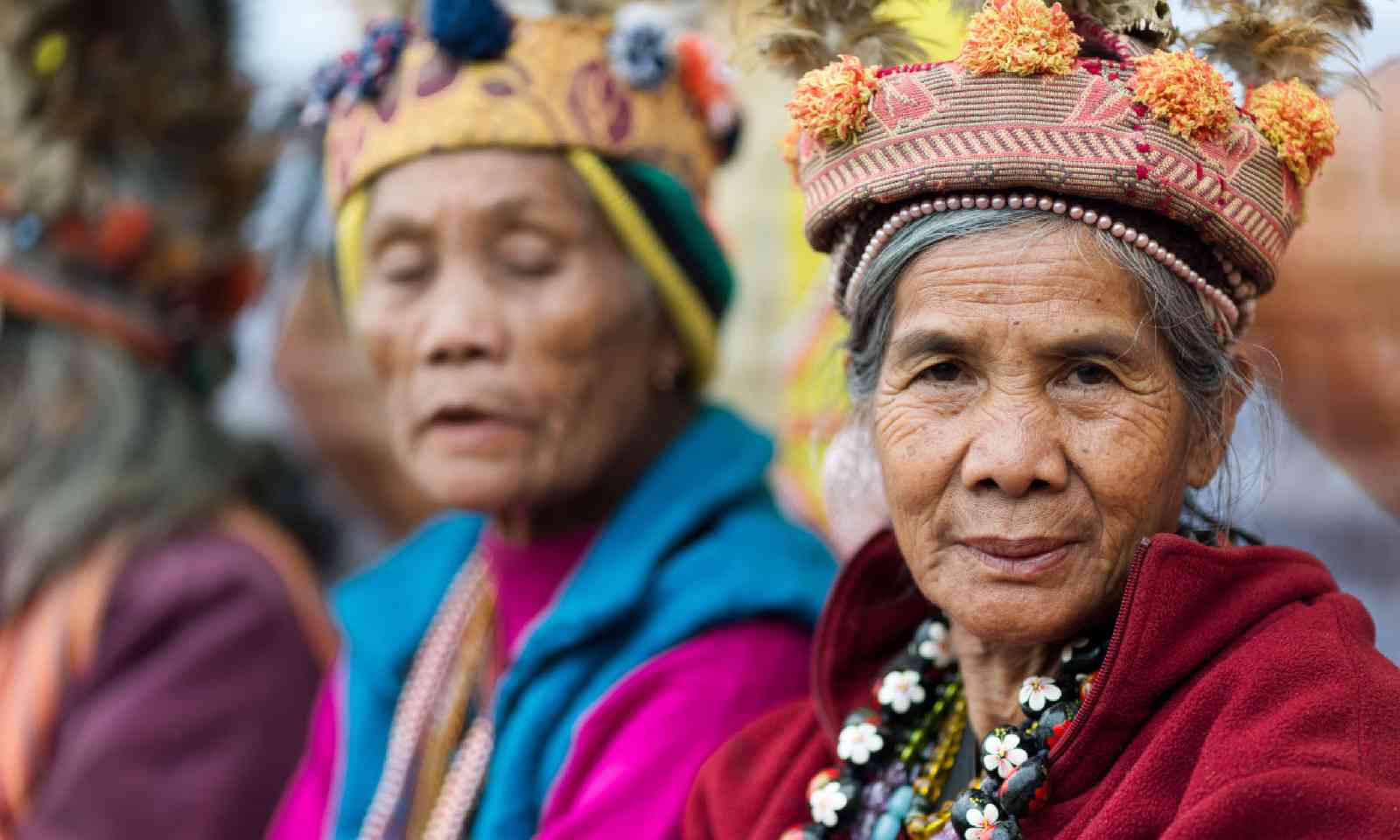 I can still recall the pungent aroma of fermenting copra (coconut) drying by the roadside. For all the diversity I was discovering, this confederation of cultures does have a strong shared identity – of devout Catholicism and the vestiges of Spanish colonialism. This manifests itself most vividly in extravagant religious fiestas, particularly celebrated during May’s Flores de Mayo.

“People here are very competitive,” beamed Amie Villenas from Lucban in southern Luzon, where the Pahiyas Fiesta takes place annually each May. This was an understatement – the entire town had gone berserk and decorated their homes’ facades head-to-toe in fresh farm produce and kiping – faux leaves and flowers moulded from rice-flour paste.

The town committee awards prizes for the best-decorated houses. “But prizes are not the main motivation behind Pahiyas,” insisted Amie, as we examined an avocado, banana and sugar cane-adorned townhouse arranged to resemble a rice paddy replete with a kiping-sculpted water-buffalo. “The idea is to offer a little of your harvest to say thanks to San Isidro Labrador [the patron saint of farmers] and get a better harvest the following year.”

Swept around by a boisterous crowd in the mood to party, I watched baton-twirling majorettes and pageants of floats drawn by unruly buffalos, and indulged in street snacks such as glass-noodle pancit hab-hab, sucked from palm leaves and highly messy to eat. 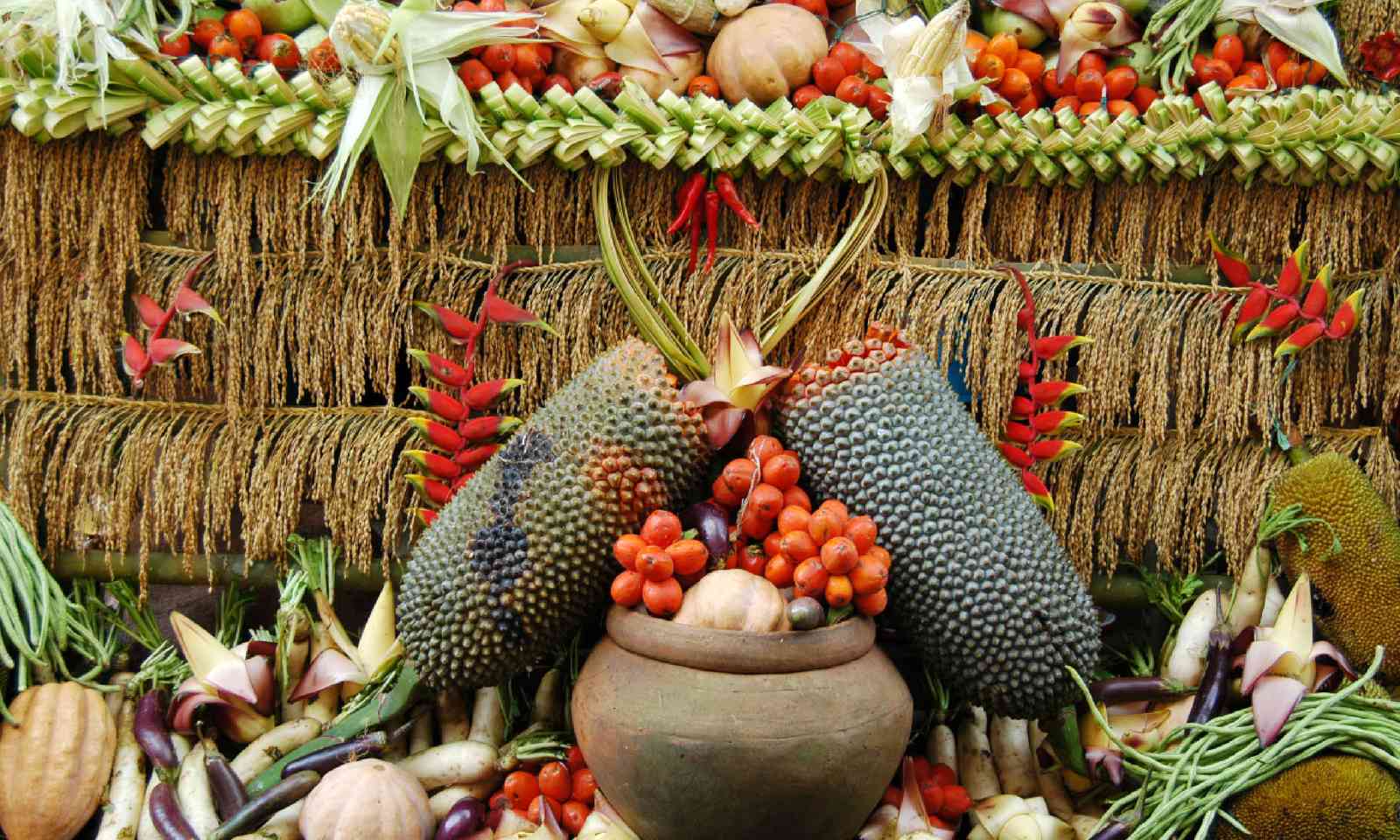 As a foreigner I was repeatedly invited into people’s homes to share a festival meal. This had pros and cons. Elderly Gilberto and his wife served up moreish leaf-wrapped parcels of sticky rice and coconut cake yet their homemade lambanog coconut spirit caused me to wince.

Beyond southern Luzon the Philippines splintered into a thousand islands called the Visayas, where I would spend a week island-hopping in paradise. After a morning’s whale shark snorkelling near Donsol (south Luzon), I travelled south by bus through the infrequently visited Samar and Leyte islands towards Cebu. On umpteen occasions I promised myself to return, as picturesque fishing villages of nipa palm thatched huts, white-sand beaches and distant island chains came and went.

I imagined the great Portuguese navigator, Ferdinand Magellan, felt the same sense of wonder ‘discovering’ the Visayas in April 1521. Although I’m convinced his arrival on Cebu Island by creaking wooden galleon would have been more romantic than mine, as driving tropical rain forced me beneath deck to endure Pirates of the Caribbean II on the in-ferry entertainment during the sea voyage into modern Cebu City.

These days, Magellan wouldn’t recognise the spot on which he planted a cross five centuries ago to claim the archipelago for his paymaster, Spain. I wanted to locate his historic cross, obscured somewhere in downtown Cebu City. But the city is a daunting place to navigate around; its steamy brashness would have shaken the hardiest 16th-century seafarer down to his boots. 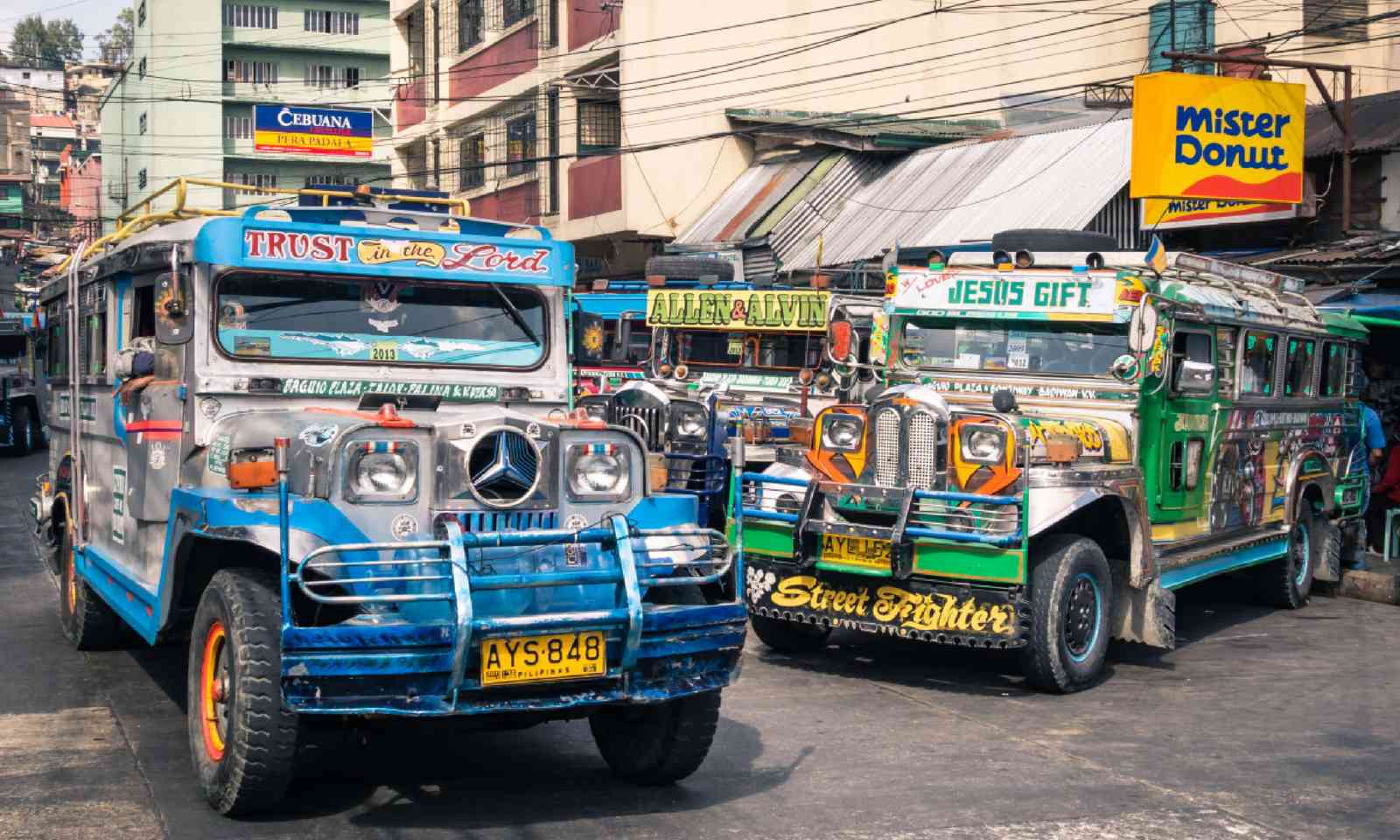 Crossing the roads in the face of endless jeepneys was frightening and the blaring din of pirates – these ones hawking patently unpatented DVDs and Rolex watches rather than pieces-of-eight – battered my eardrums senseless. The fume-filled air was flavoured by the Cebuanos’ passion for grilled meat: pork belly, boneless bangus fish and pako chicken wings, sizzling on street barbecues.

Neither would Magellan have recognised the triangular-shaped San Pedro Fort close to Cebu’s beautiful art-deco port. Its metre-thick walls and circular bastions were constructed in 1565 during a second more successful attempt by the Spaniards to colonise.

By then Magellan was dead, slain by an irate local chief named Lapu-Lapu shortly after arriving. Inside the fort now is a fragrant garden, where ylang-ylang flowers sweetly deodorise the air while a blind guitarist strums Pretty Woman for pesos. Nearby, located behind the lichen-encrusted Santo Niño Cathedral, I finally found Magellan’s now refurbished Cross.

Cebu City’s armada of ferries make it an essential staging point for sailing around the southern Visayas. Travel advice needs to be sought if venturing south beyond these magical islands because of political unrest on Muslim Mindanao Island. So I chose Bohol and Siquijor, accompanied on both voyages at sea by Badjao sea gypsies who rarely set foot on land and whose tiny outrigger-canoes slipped across the water like pond-skaters. 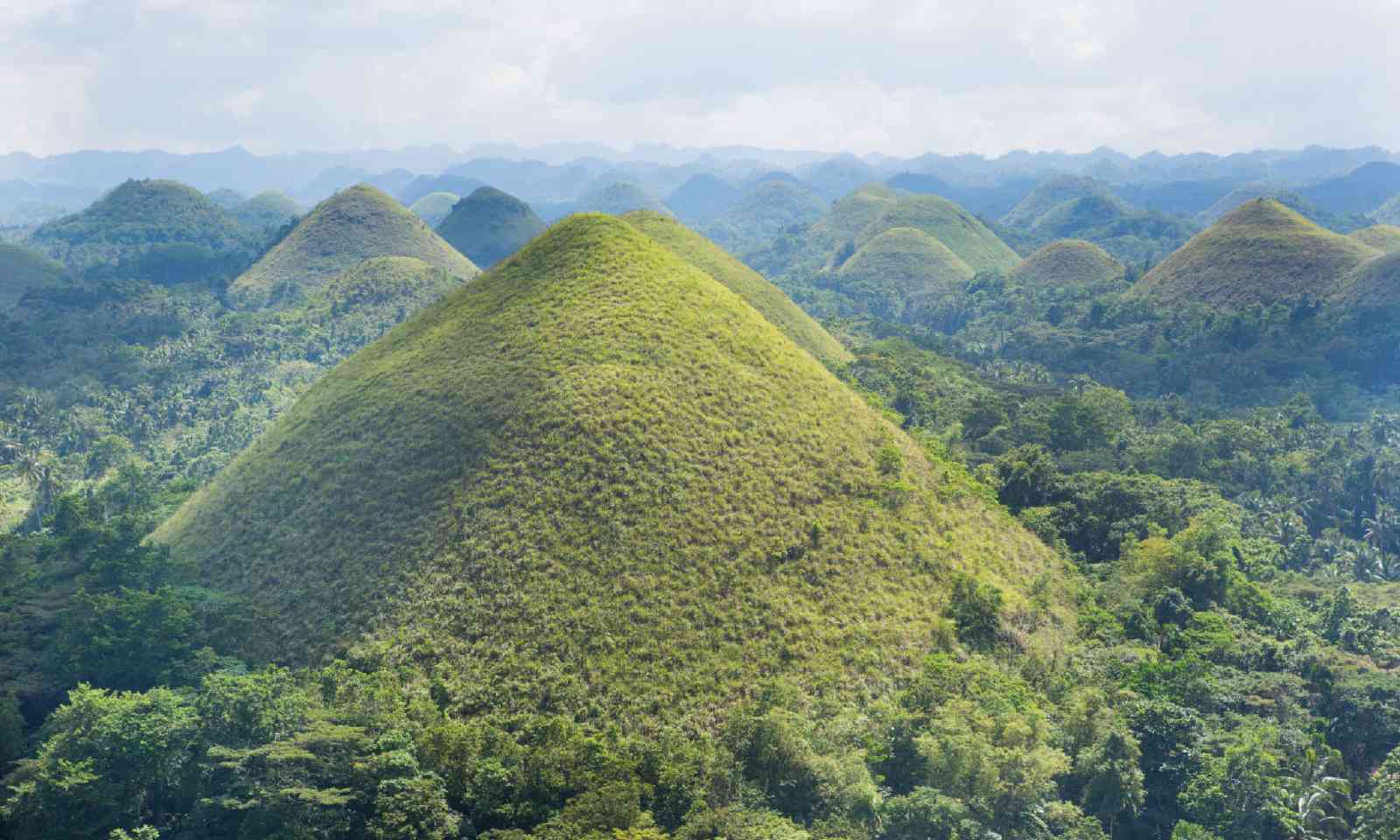 Bohol is quirky and fun, a rugged-looking island with coralline-stone churches and tricycles emblazoned with sanctimonious religious scripture. “The tricycles used to have pictures of sexy women but the drivers were ordered by the governor to remove them,” revealed local guide, Merlou Reyes.

There is a little tourist circuit on Bohol, popular with coach-loads of excitable Philippine tourists, beginning at the bizarre Chocolate Hills. “There are two theories regarding the origin of the Chocolate Hills,” began Merlou, from a viewpoint near Carmen. As far as my eye could see the landscape was pimpled with some 1,700 almost identical, 40m-high rounded, green-brownish hills that stood out from the luxuriant surrounding jungle. Imagine a basket of Easter eggs.

“Scientists say,” continued Merlou, “they formed as deposits of coral limestone pushed up by earth movements and eroded in a tidal zone. But locals believe…” – and at this point she perked up, having dispensed with the dreary science – “…they’re the tears of a giant who squeezed his mortal lover to death in a fit of passion.” 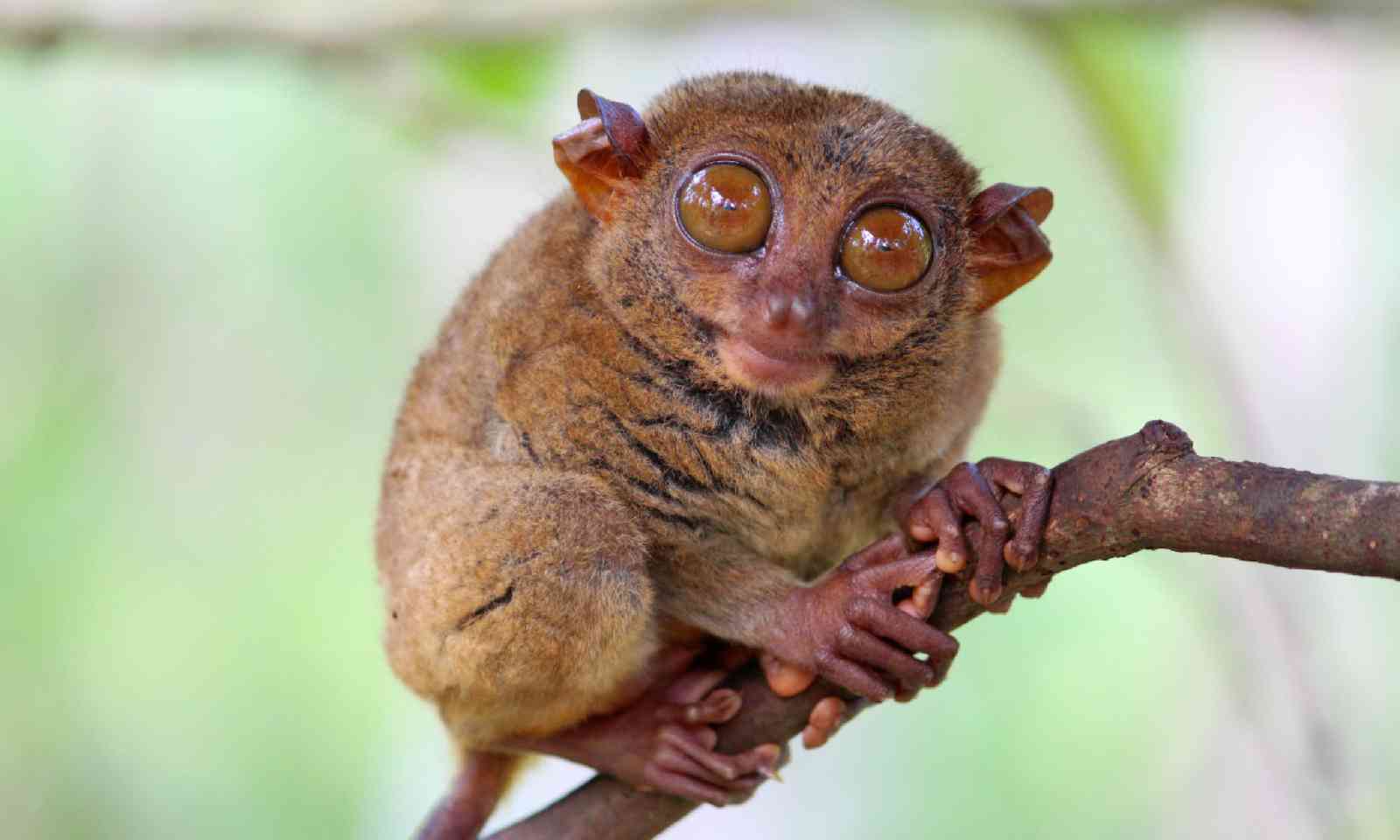 I could have lovingly embraced the tiny tarsiers – next up on Bohol’s tourist trail – but they probably would’ve given me a nasty nip. Think Steven Spielberg’s Gremlins, add bushy fur, bony humanoid fingers and saucer-wide eyes (larger than their brains) et voila… a tarsier.

These ancient endemics have been clinging to trees with a look of startled surprise for 45 million years. Rare and located nearly exclusively on Bohol, there are several thousand of them on the island, explained Victor, who locates these nocturnal critters in the Tarsier Sanctuary’s mountain forest. Merlou and I saw six of them and cooed every time one of them clapped their adorable eyes upon us.

“Relax,” said the white-jacketed steward after I’d sprinted across Dumaguete Quay on Negros Island, close to missing the ferry connection to Siquijor, “the ferry leaves on Philippines time.”

‘Relax’ was exactly what I intended doing during my final stop. After two weeks of travelling I simply wanted to veg for a few days in Crusoe-esque splendour – and at Coral Cay’s beach chalets in Solangon village I did just that. 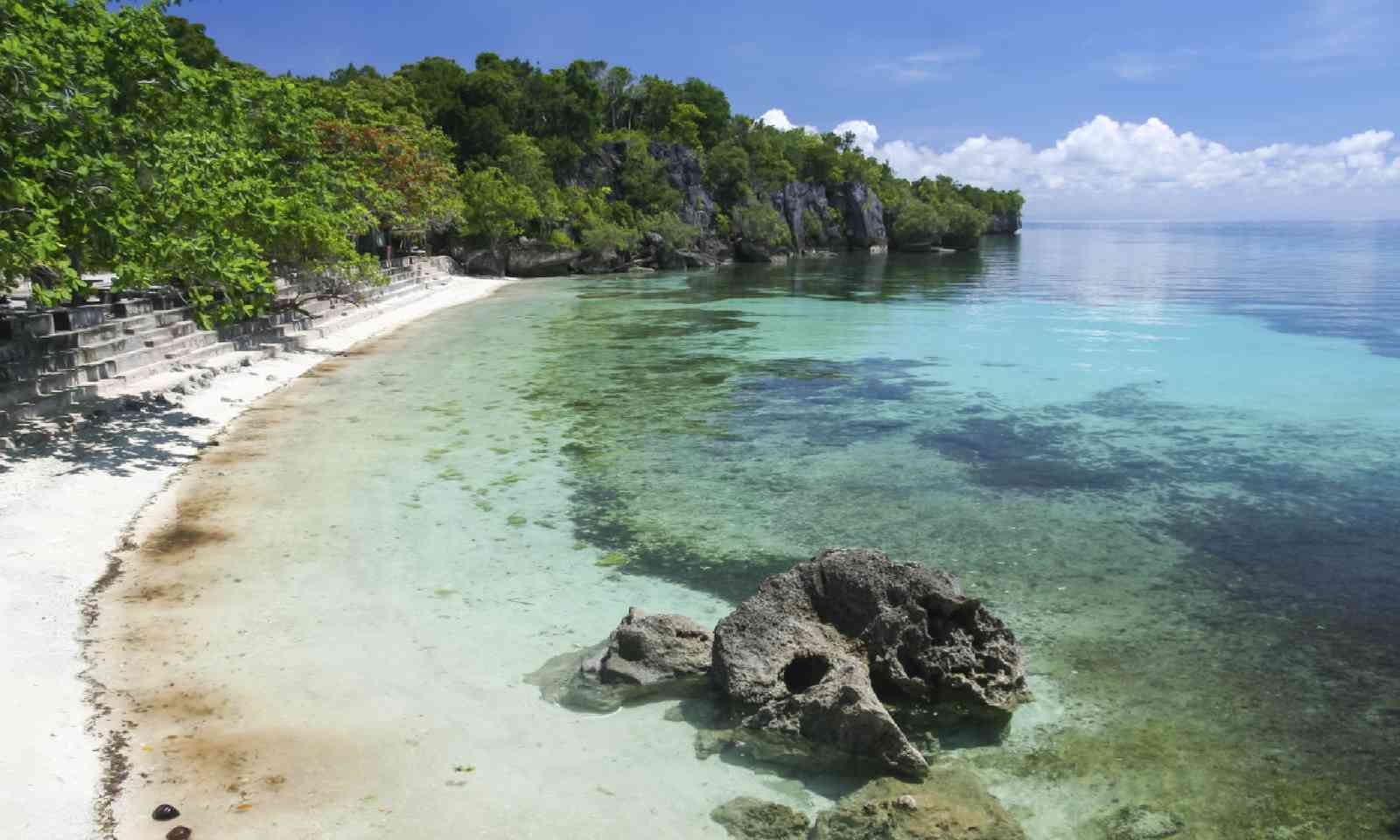 Eating fresh fish and snorkelling with live ones, collecting shells on the pristine beach, touring Spanish colonial churches by motorbike and listening to tales of magical folklore over tropical fruit shakes with Jiesa, owner of JJ’s Bar: “There’s a vampire living near your guesthouse but she’s too old to fly.”

I saw no spirits. But I had been treated to a country with every ounce of the allure of its more popular South-East Asian neighbours yet which remains mystifyingly free of visitors. I’d skipped through ten islands during my journey, which left exactly 7,097 unaccounted for – a lifetime of further adventures.

The author travelled with Far East specialists Bamboo Travel, who can make tailor-made itineraries all over the Philippines