Explore Amazonian lowlands to Andean highs, and discover pre-Columbian treasures, soaring condors and miraculous landscapes, with one of these five itineraries for the perfect Peru trip... Duration: 15 days (plus six days if you visit Cusco)

Why go? See the mysteries of the Nazca Lines, Andean condors in flight and sample island life on Lake Titicaca.

When to go? All year. The coast is cool and cloudy from May to December, and warm the rest of the time. Arequipa is sunny most days, but Colca is rainy from January to April and dry and cool the rest of the year.

Lake Titicaca is usually hot and sunny in the day, with occasional rain (November to April), but nights are cold – and bitterly so between June and August. The sea lions of Paracas (Shutterstock)

South of Lima, Paracas is a good base for visiting the seabirds and mammals of the Islas Ballestas, pisco distilleries, the coastal desert around Ica and the oasis resort of Huacachina.

Next stop south is Nazca, whose famous Lines (huge geoglyphs) are one of the great travel mysteries. For the best view, take a flightseeing trip from Nazca, Ica or Pisco.

Further south is Arequipa, the White City of volcanic stone. Of its religious monuments, Santa Catalina convent is almost a colonial town within the middle of the city, with the house of Nobel laureate Mario Vargas Llosa and museums filled with mummified Inca remains.

Excursions include volcano climbing, rafting on the Apurímac and visits to the Colca Canyon, one of the deepest in the world (Cotahuasi, also in this region, is even deeper).

Villages sit amid extensive agricultural terracing, hot springs and good trails, but the real draw is the Cruz del Cóndor at Colca, a viewpoint for watching Andean condors up close (best May to December). 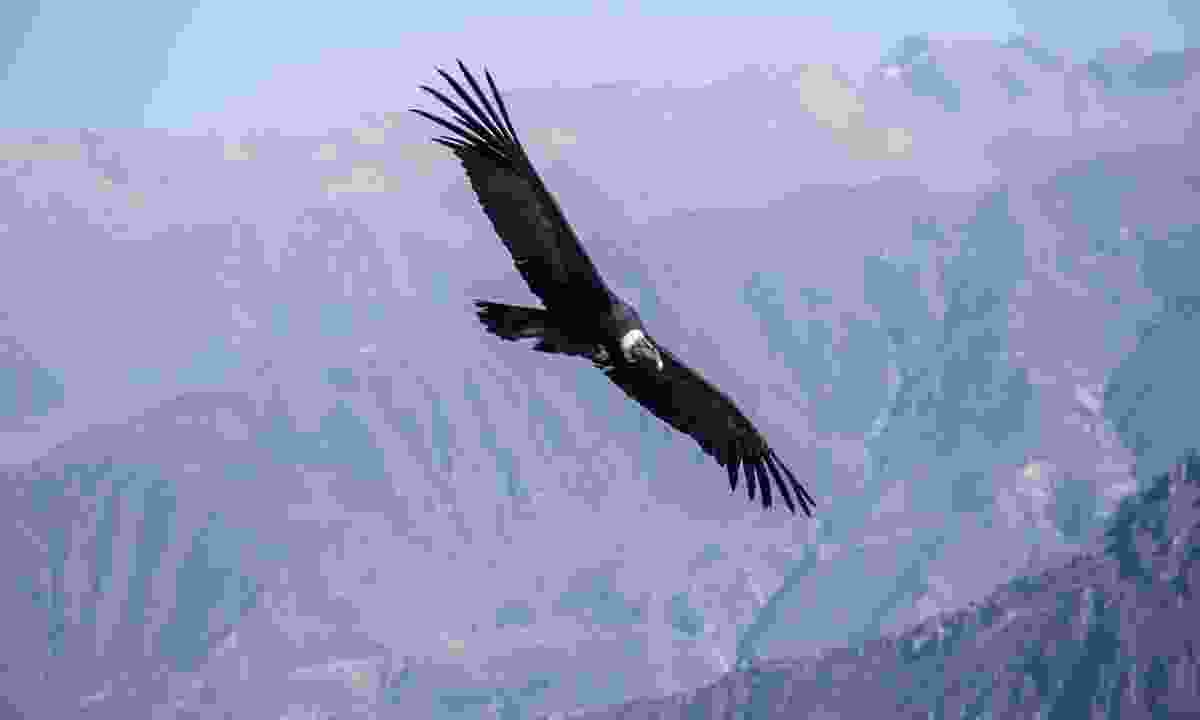 An Andean condor flying above the Colca Canyon (Shutterstock)

Take a bus or luxury train to Puno on Lake Titicaca. Boats sail to the Islas Uros (floating islands of reeds built by the Uros people) and on to Taquile and Amantaní, islands of Quechua weavers where you can stay with families.

Puno’s busiest months are February (La Candelaria festival) and November, which marks the Founding Incas' emergence from the lake.

On the return journey, either take a bus from Puno to Juliaca and fly back to Lima, or take a bus or luxury train to Cusco. Also from Juliaca, the recently completed Interoceanic Highway connects with Puerto Maldonado for the reserve Tambopata.

2. Cusco and the sacred valley Duration: Eight to 15 days (plus four to six days with a jungle extension)

Why go? It’s Peru’s iconic Inca destination, with one of the most complete historical records in South America, plus plenty of highland festivals, markets and local customs, and the option of jungle extensions.

When to go? All year. The wettest months are November to April, when it can be very hot in the jungle; dry season is May to September (very cold at night in the highlands).

High season is June to September – but year-round in Cusco. The Inca Trail is closed in February. 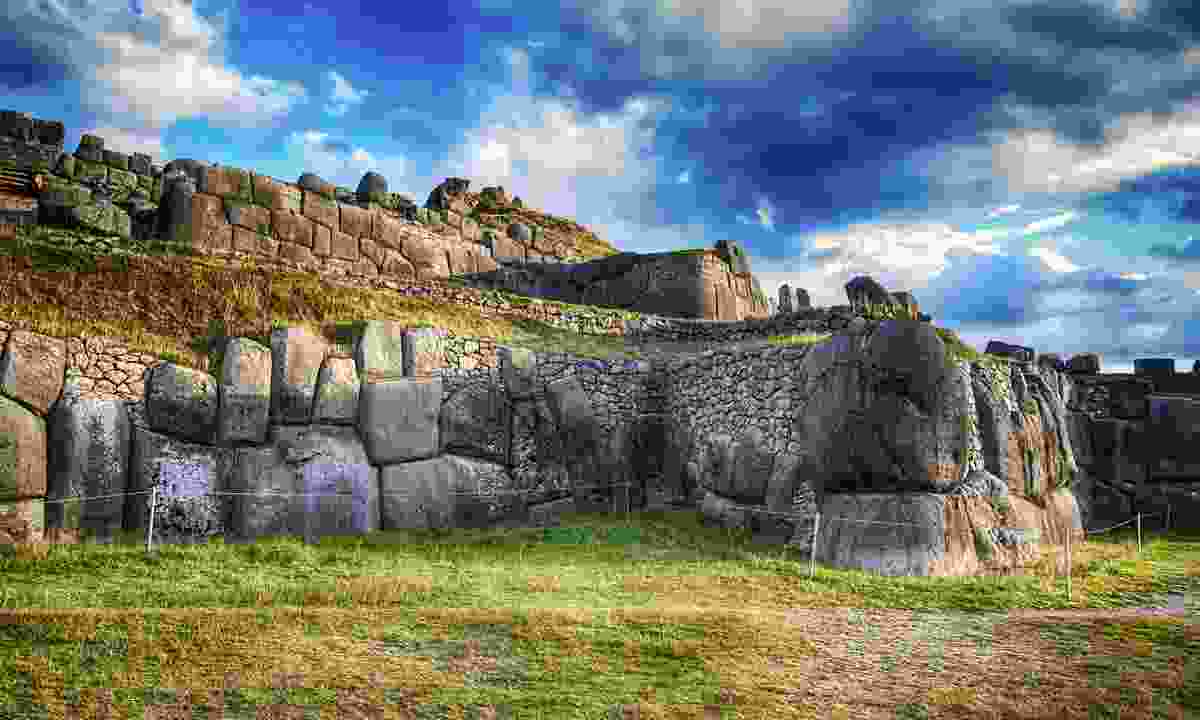 The Sacsayhuaman ancient stones outside of Cusco (Shutterstock)

Tourism here caters to every expectation, and while online booking or multi-site tickets are required for many attractions, it’s easy to find centuries-old pathways and isolated views of snow-capped Andean peaks.

In Cusco itself, the Inca stonework is millimetre-accurate – the Stone of 12 Angles on Hatun Rumiyoc street – or simply bafflingly huge, such as at the Sacsayhuaman ceremonial centre. Modern museums here contain many treasures, and the city is bursting at the seams with galleries and hotels where the contemporary blends with the colonial, as well as restaurants fusing traditional ingredients with international flair. The Sacred Valley follows the Urubamba river to Machu Picchu, the goal of all Inca Trail trekkers and luxury train travellers here.

It’s a great sight in whatever light you see it. Along the valley itself, you’ll encounter plenty of towns and archaeological sites, such as Pisac and Ollantaytambo (one of the last strongholds of the Inca before the empire fell).

Other unmissables include market towns like Chinchero, the supposed Inca crop laboratory at Moray and the Lares Valley, which is popular for its well-organised treks and biking. Finish by combining with a side trip into the jungles of the south-east. Why go? In the colonial city centre and surrounding modern suburbs are scattered Pre-Inca monuments, the country’s most extensive museums and its best cooking.

When to go? All year. It’s typically misty and cool from May to November, and sunny and hot the rest of the time. The historic centre, a UNESCO World Heritage site, has a fine central square (Plaza de Armas) and splendid colonial buildings, many with elaborate wooden balconies. Close by is the busy Barrio Chino (Chinese quarter) and Parque de la Reserva with its fountains and light displays.

South of the centre, San Isidro and Miraflores, where most visitors stay, boast many of the restaurants on which Lima’s reputation as a gastronomic capital of South America was founded. One, Huaca Pucllana, lies beside the huge adobe pyramid of the same name. Shopping is good, too, including in the giant Miraflores handicraft market.

The pre-Inca oracle site of Pachacámac is a worthwhile half-day excursion to the south, while Caral (185km north), one of the earliest cities ever discovered, needs a full day. Why go? The mountains yield adventures in stunning surroundings, while the coast has pre-Inca archaeology, surfing, seafood and festivals.

When to go? Dry season in the mountains is May to October; Trujillo is dry all year round. Christmas/New Year’s is a popular holiday time, even up to February in Trujillo. 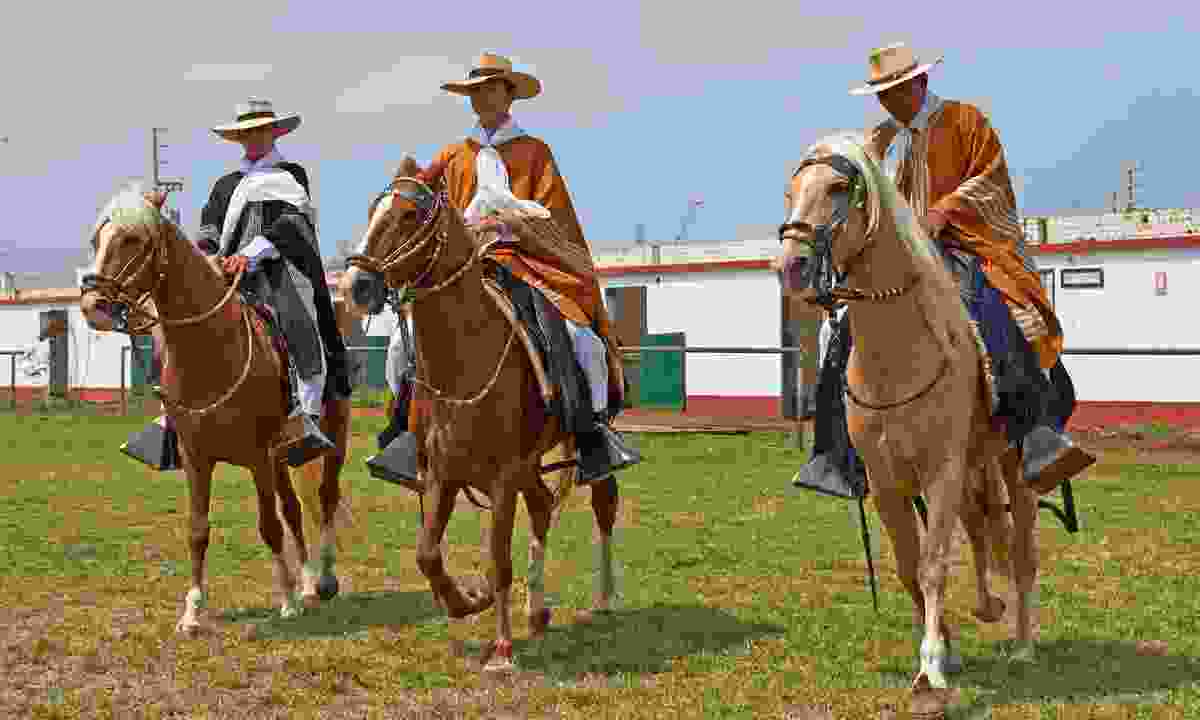 A parade of Paso horses at Trujilo's Spring Festival (Dreamstime)

The aptly-named Cordillera Blanca has several of the highest mountains in South America. Climbers, hikers and bikers head for Huaraz, the main town, for the tried-and-tested routes over mountain passes and to high-altitude lakes; some are long-distance, others just day treks.

Even a non-Alpinist will enjoy the beautiful scenery, little towns and journeys around the two parallel mountain ranges. Don’t miss the fortress-temple of Chavín de Huántar (built around 800 BC), the heart of one of the most significant of the pre-Inca civilisations.

Next up, descend to the coast and the city of Trujillo, formerly an important colonial centre. Its Spring Festival in September is famous for its displays of traditional Marinera dancing and parades of Paso horses. 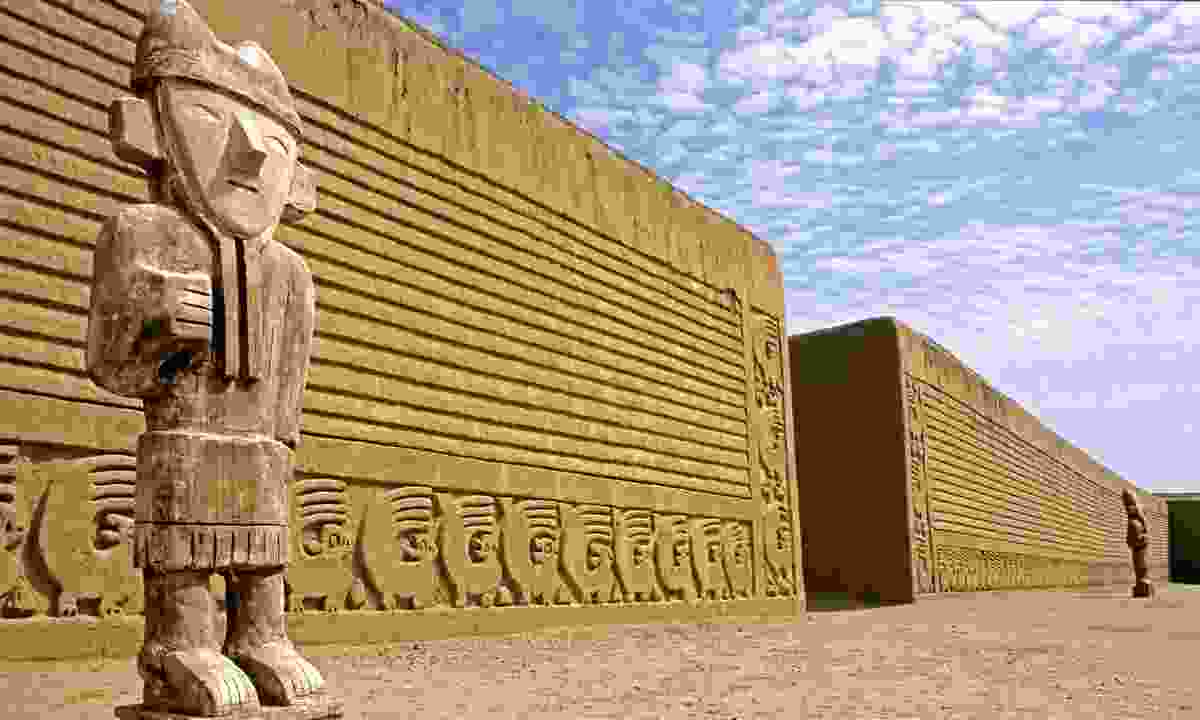 Nearby are the remains of two major pre-Inca civilisations. Layer upon layer of polychrome murals have been uncovered at the Moche adobe pyramid of Huaca de la Luna (4km south), and more friezes can be seen at El Brujo (50km north).

The museum houses the mummified remains of the Señora de Cao (a Moche aristocrat from 400 AD). Chan Chán, a short drive west, is the largest of the adobe cities and the former Chimú imperial capital. Beyond lies Huanchaco, where both surfers and fisherfolk on reed boats ride the waves.

From Trujillo, you can skim the coast back to Lima or link up this itinerary with the ‘Northern Circuit’, either via Chiclayo or Cajamarca. Yumbilla Falls is the fifth-tallest drop on earth, and a fine hike through the cloud forest (Shutterstock)

Duration: 10 days (plus four to five days for an Amazon extension)

Why go? There is a wealth of pre-Inca sites in the coastal desert and the Chachapoyas area of the Andes, plus forests, waterfalls, birdwatching, horse riding and trips on the Amazon.

When to go? All year on the coast. Chachapoyas’ dry season is May to September (roads may be difficult in rainy season). The Amazon is typically drier from April to October. 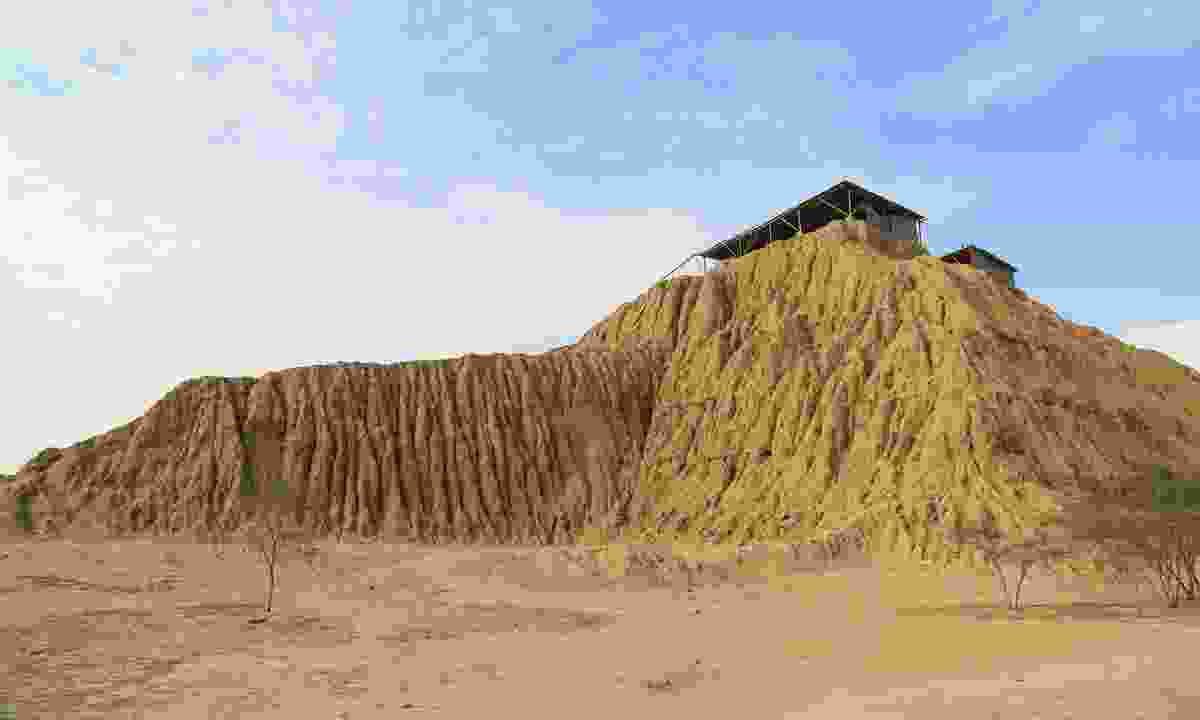 The adobe pyramids of Lambayeque (Dreamstime)

The huge adobe pyramids around Ciclayo (in the Lambayeque department, 260km north of Trujillo) contain noble tombs, such as Sipán, the artefacts from which are now mostly displayed in fine modern museums. A highlight, though, are the Sicán ruins in Pómac forest where you can horse ride and enjoy its birdlife.

Travel a day inland to the domain of the ‘Cloud People’ (aka the Chachapoya), where stone fortresses like Kuélap straddle mountaintops and mysterious sarcophagi cling to inaccessible ledges.

An exciting route south from Chachapoyas passes more archaeological ruins and traverses deep gorges to the colonial city of Cajamarca, from where flights go to Lima and buses to Trujillo.

A beautiful road crosses the Andes, descending the Abra Patricia conservation area to the Amazon lowlands, through the orchid city of Moyobamba and on to Tarapoto. Birdwatching opportunities are rife here.

Next, fly from Tarapoto to Iquitos for an Amazonian adventure on the mighty river itself, or into the waterways of Pacaya Samiria National Reserve. If you prefer to stick to the coast, go from Chiclayo to Piura (reached from Lima by plane) and on to Máncora, one of Peru’s premier beach resorts. You can then carry on north to Ecuador.

Plus... the writer's own route The stepped terraces of Nor Yauyos-Cochas (Shutterstock)

The road wound its way up into the Yauyos mountains from the green Cañete river valley through rocks, sand and shale the colour of ash. Grey-green cacti guarded the slopes under a cloudless sky, while the gorges above revealed irregular pockets of cultivation alongside acres of centuries-old terracing.

We arrived at Refugio Viñak after a full-day’s drive from Lima, gasping for breath in the high altitude. A coca tea, a soak in a hot tub under the stars and a comfy chair in front of the open fire in the lounge all eased the soroche (mountain sickness).

Above the lodge is Santiago de Viñak, all zinc roofs and faded whitewash, punctuated by the occasional sky-blue or turquoise wall. Trekking in the Cordillera Huayhuash (Shutterstock)

We explored tracks that climbed up above the tree line, passing cattle with coloured ribbons in their ears, fields of vegetables and maize, and wild lupins.

In the remote hamlets, some homes had satellite dishes and up-to-the-minute electronics, other farmsteads were just ramshackle and deserted.

Across the valley lies Madeán. To get a message there, you can go the long way, down the gorge and up the other side, or simply shout. We were told the next day that the village was hosting a dance competition arranged by the EU and some NGOs to keep local traditions alive. In a plaza beneath the ‘Mini Catedral’, dancers in black trilby hats and brightly decorated mantas circled to the tune of a single violin and percussion. One group sportingly invited us to join them.

In a hop-and-a-skip we ceased being bystanders and were given the chance to share in the customs that breathe life into the day-to-day. Each year new experiences are added to Peru’s travel inventory, and still there is more to discover.

Our dance was just one example of how every route beckons you to delve beneath the surface, embracing a vitality fuelled by the here-and-now, as well as the deep past.

Get beyond the Inca Trail with these alternative trips

Here's 9 things you absolutely must do in Peru

Find out what wildlife you might see in Peru