Outlander's top Scotland filming locations - in Edinburgh, Fife and beyond

Outlander is back in 2020 with season five, but where can you relive the show's Scottish magic for yourself? Follow in Claire and Jamie's time-travelling footsteps with these iconic filming locations...

The TV series Outlander is a cult hit. It's not hard to figure out why, either. It's a too-juicy-to-resist mix of romance, time travel and epic drama - and not just from the sweeping views of 1700s Scotland.

Add in a fan-favourite leading man, Scottish actor Sam Heughan, and you've got yourself a fifth (and probably sixth, and seventh) season.

Fans have flocked to Scotland's dramatic Highlands, castles and countrysides to experience the magic for themselves, since the series first launched.

Here, we'll share some of the most iconic Outlander filming locations in Scotland so that you can visit, too. Spoilers ahead for seasons one to four ahead, of course... 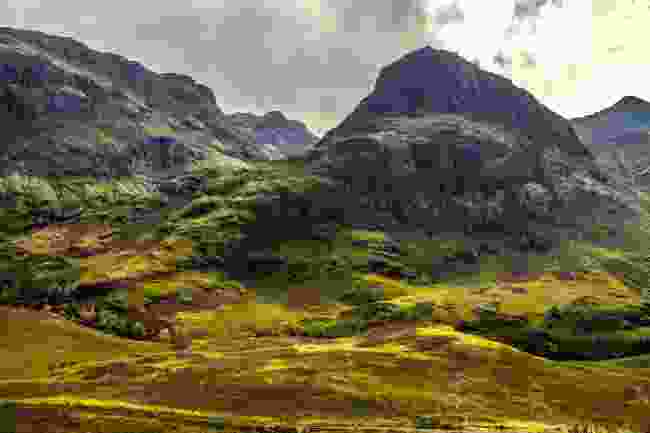 Glencoe in the Scottish Highlands appears in the Outlander opening credits, for each episode.

The Highlands are excellent place to start to get to know wild Scotland. Here's our travel guide to the Scottish Highlands. 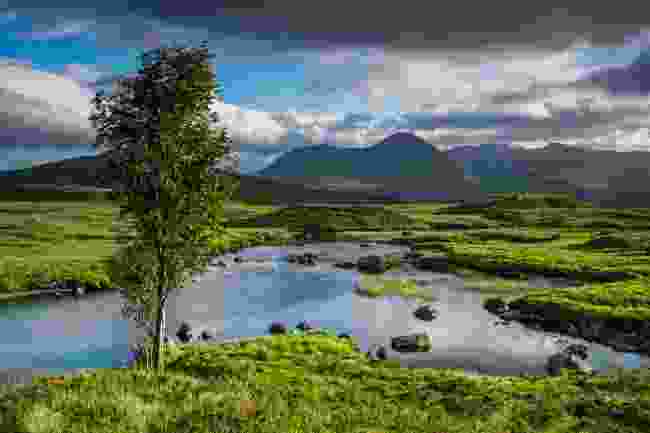 Every Outlander fan will remember the scene in which Claire travels back in time to the year 1743.

It was filmed at Rannoch Moor, in the village of Kinloch Rannoch in Perth and Kinross, in the Scottish Highlands.

Alas, you won't find the Craigh na Dun stones here, as they don't exist in real life. Reportedly, the stones used on set were made of styrofoam. 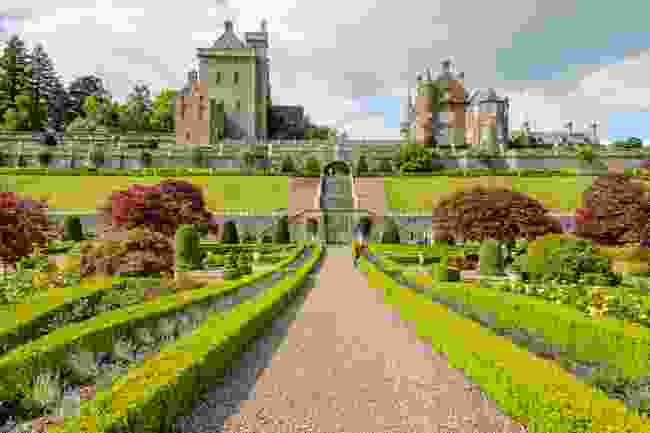 Perthshire's postcard-ready castle and gardens serve as the Palace of Versailles gardens during an episode of the show.

To see it for yourself, head to the market town of Creiff, which also offers tours of its malt whisky distillery from the 1700s. 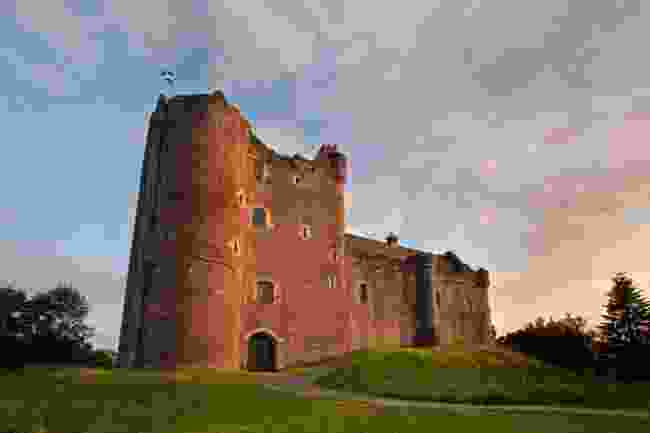 This stunning castle in Stirling is surely recognisable to many TV and film fans.

It has served as filming locations in Monty Python, Game Of Thrones and the Chris Pine Netflix film Outlaw King.

In this case, fans will be awed to visit Castle Leoch, the home of Jamie's uncle and the Mackenzie clan.

Can you see the Craigh na Dun standing stones?

Craigh na Dun is perhaps the most iconic Outlander image we can think of. It's among the stones that Claire first begins her time travelling journey.

Alas, the exact stones dreamed up by author Diana Gabaldon don't exist. These possible inspirations are real, and easy to visit. Sadly, leaping through them won't send you back in time. As far as we know, anyway... 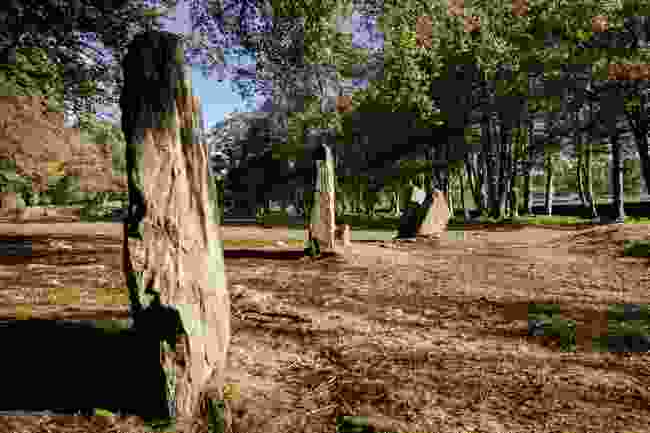 You can't deny these striking stones - a circular tomb and rocks standing tall - have been around since the Bronze Age, and bare a keen resemblance to the image conjured in the books and the show.

If nothing else, they're completely fascinating in their own right. 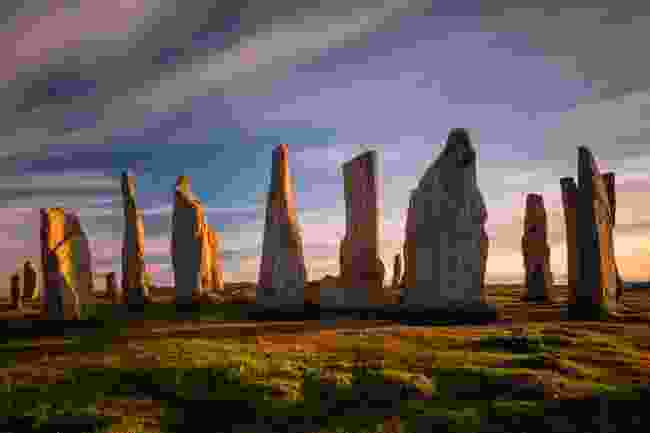 Over 5,000 years ago, the Calanais standing stones were erect on the Isle of Lewis in the Outer Hebrides.

The groups of tall, jagged stones are perhaps a tad more dramatic than Clava Cairn. They're well worth a visit to get into the mood of the series.

Where they stand is well-equipped for visitors, too - with a visitor's centre, historic information and even a cafe.

Outlander filming locations in (or near) Edinburgh 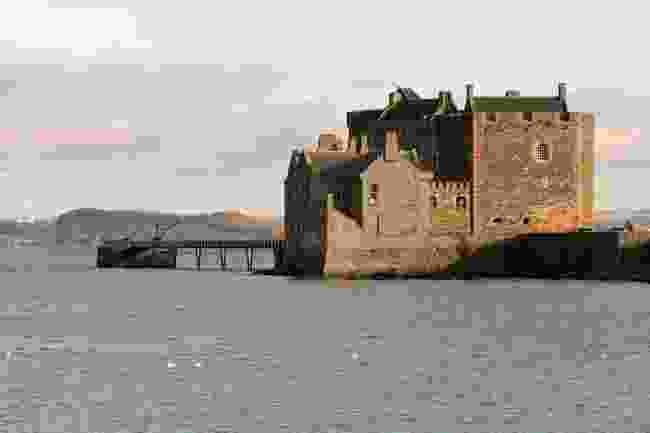 Blackness Castle in Linlithgow was used as the filming location for Fort William. Unfortunately, the real Fort William no longer exists.

The 15th century fortress is a popular stopping point for fans of the show.

Likely because its an important location: its here where Jamie received a sharp whipping by Tobias Menzies' character, Black Jack Randall. 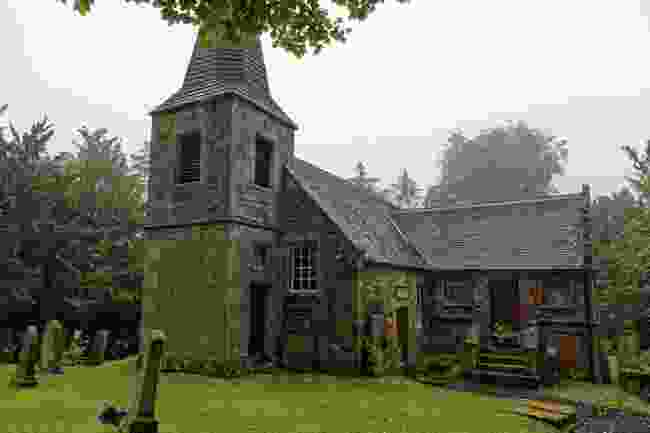 It may not seem much, but in the world of Outlander, this quaint 17th century church in Milton Bridge, near Edinburgh, is a pretty big deal. It's where Jamie and Claire tied the knot.

Superfans can marry here themselves, with the ceremony taking place in the church, and the celebrations in the restored Glencorse House. 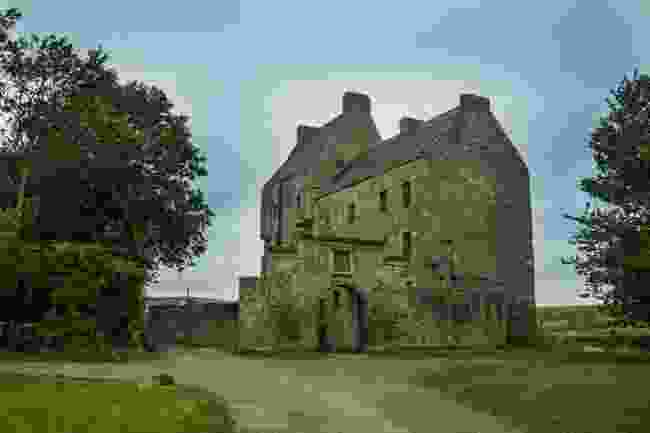 Midhope Castle is in Abercorn, a 40-minute drive from Edinburgh.

The exterior of the 16th century castle is probably better known to fans as Lallybroch, the home of Jamie Fraser.

Understandably, it's a hugely popular site for fans to visit. The castle is located on a private estate, but you can walk the grounds. You'll need a special vehicle permit if you're driving there. 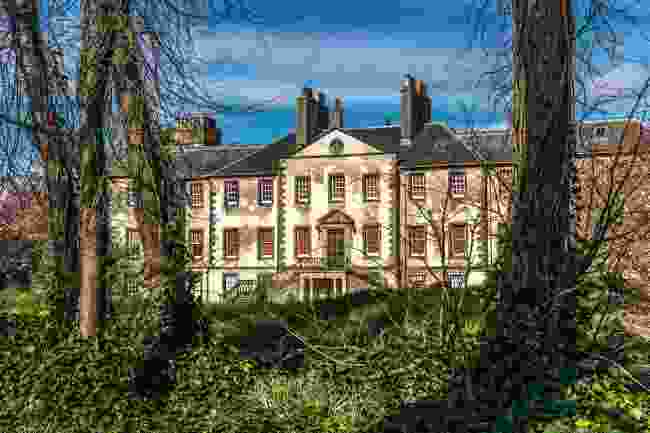 This National Trust property is in Musselburgh, 20 minutes by car or approx 40 minutes by bus from Edinburgh.

It appeared in season four of Outlander, notable especially in the premiere episode. 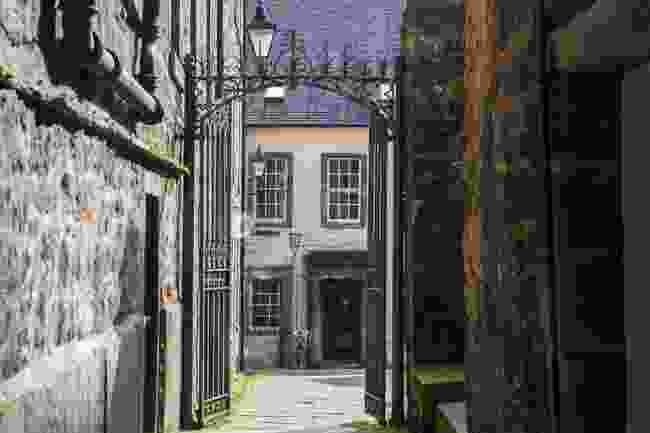 As of season three, this old street in Edinburgh has been used for filming, well, exactly that. It's seen in the show as an 18th century Edinburgh street.

You won't struggle to find it. Tweeddale Court is the heart of the city centre, not far from Edinburgh Waverley train station and the Edinburgh Dungeons. 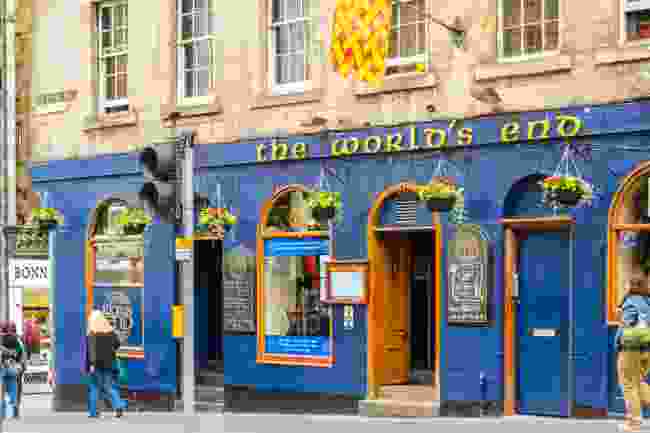 Located on the architecturally-pleasing Royal Mile, the bright blue World's End pub is absolutely worth a stop.

Here, Jamie helps Mr Willoughby get out of a, erm, rather tricky situation with a sex worker.

The actors didn't film inside – a set was used instead. Still, one to tick off the list for Outlander purists. 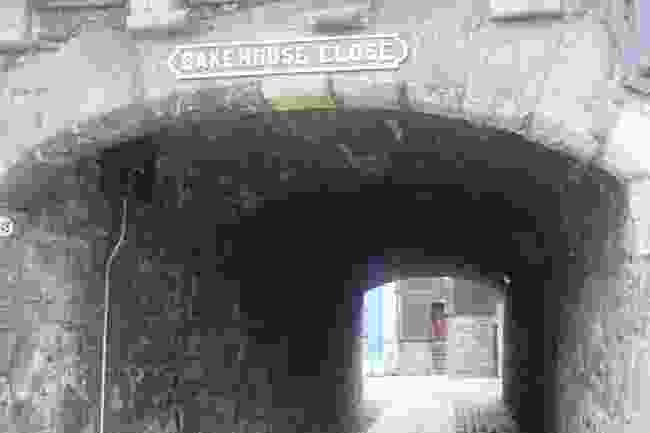 Its here, on this street seemingly still stuck in the past, that the scene affectionately known as the 'print shop' scene was filmed.

An exceptionally important location for those enamoured by Jamie and Claire's romance. They reunite, after years apart, in season three. 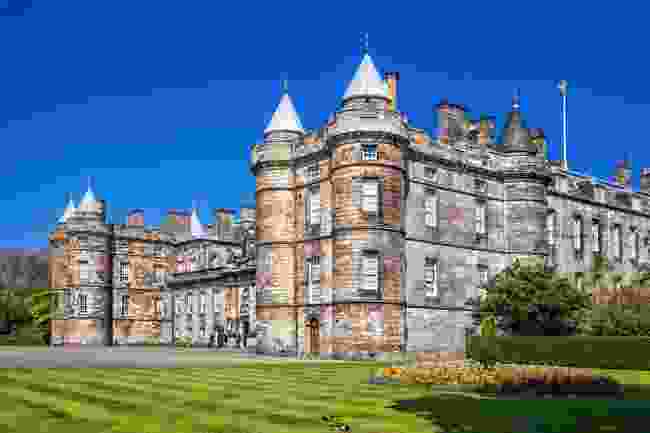 In Outlander, the palace is actually the home of Prince Charlie. It's seen in earlier episodes of the saga, and is visited by Claire and Jamie. 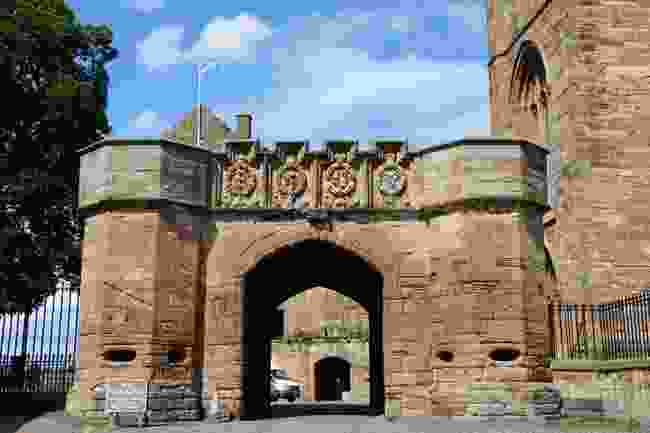 Linlithgow lies 15 miles west of Edinburgh, but is worth the trip by train. It's just 20 minutes from Waverley, as opposed to over an hour in the car.

The palace is the filming location for Wentworth Prison. In the episode, Jamie is taken here to stand trial, and is horribly tortured by 'Black Jack' Randall in the dungeon. 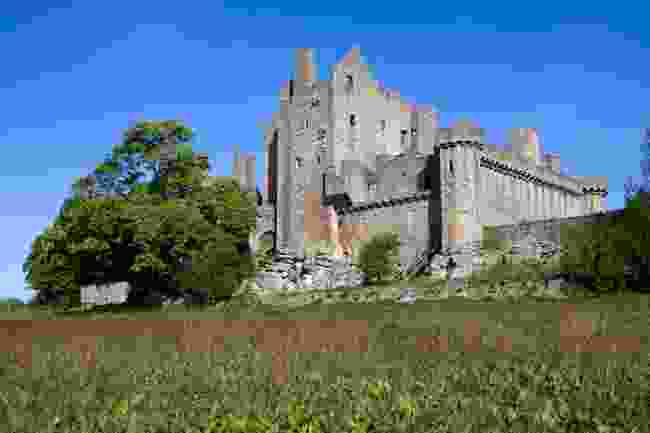 The medieval Craigmillar Castle has a rich real-life history. In the 1560s, Mary Queen of Scots sought refuge at the castle - and soon after became a prisoner there.

In season three of Outlander, Craigmillar takes on the role of Ardmuir Prison.

The fact and fiction is easy to discover, with a 20-minute car journey from Edinburgh's centre. Public transport also available.

Outlander filming locations in (or near) Glasgow 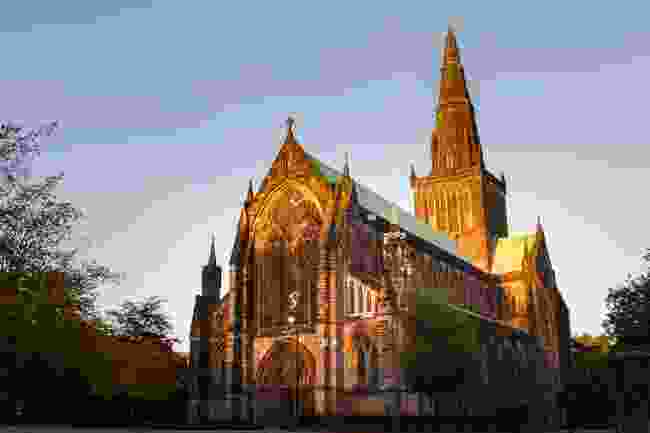 In season two, the lower section of the cathedral was transformed into L'Hôpital des Anges in Paris, France.

Don't just go for the show, of course. Glasgow Cathedral was first built in the 1100s, the oldest in all of Scotland's mainland.

Next door is the Glasgow Necropolis, a Victorian cemetery with over 50,000 graves. 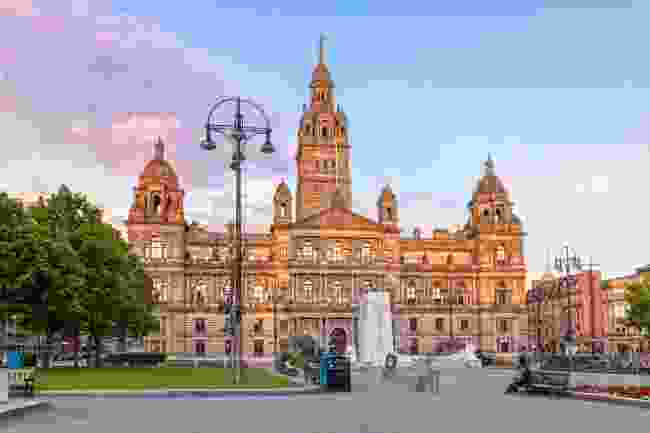 This main square in Glasgow got a 1940s overhaul when it was used for filming the proposal scenes between Claire and Frank in season one.

It's one of six squares in Glasgow, among them Cathedral Square and St Andrew's Square. If you visit it winter, expect lots of twinkly Christmas decorations and festivities. 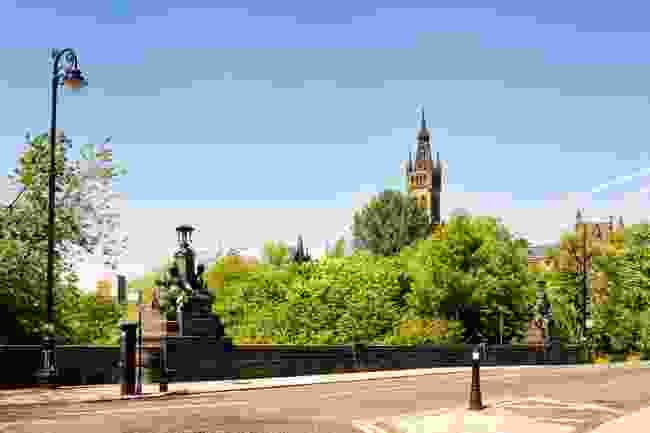 While you're in Glasgow, don't miss a lesser-visited Outlander site – a stone's throw from Glasgow University.

In season three, Claire passes over the park's Kelvin Bridge with a buggy in tow. 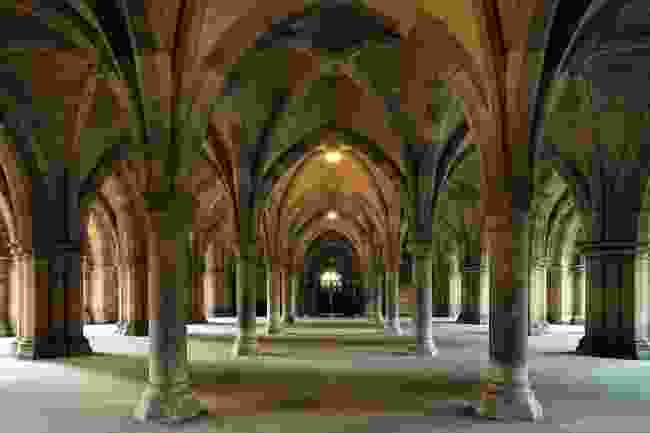 Indeed, once you've spied the bridge, you can also wander the cloisters of Glasgow University, which were used as a set for Harvard University in later seasons of the show.

Any TV or film buff should take a (self-guided) tour through the cloisters. They've also been seen in the Tom Hanks/Halle Berry movie Cloud Atlas.

The small Fife village of Falkland was used for filming scenes set in Inverness, where Claire and Frank visit on their second honeymoon.

The B&B they stay in is callen the Covenanter Hotel, and you can book a night or two there if you fancy an overnight stay.

In season two, several streets were used in filming Inverness in the 1740s. You'll get a real feel for the show, wandering around. 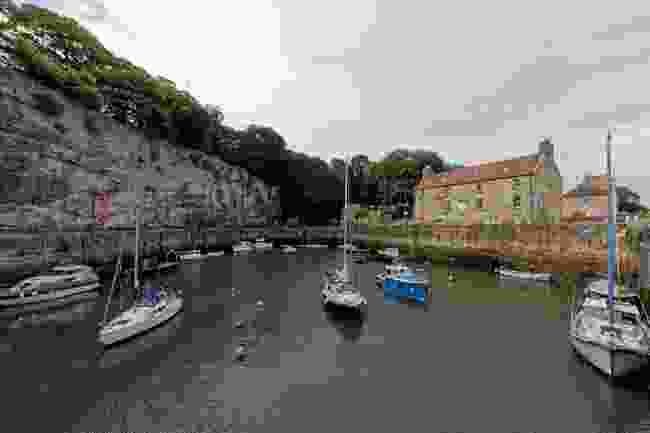 The cliff-surrounded Dysart Harbour is seen in the second season of the show – disguised as a French harbour.

You'll likely recognise it from the scene in which Claire arrives in Le Havre, France with Jamie and Murtagh. 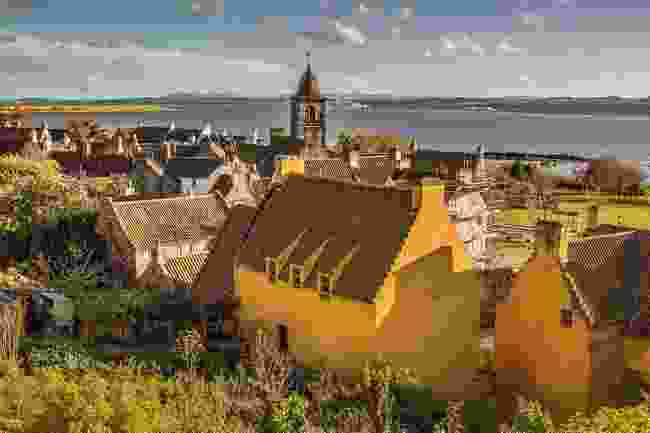 The colourful village of Culross in Fife, home to many 18th century buildings preserved by the Scottish National Trust, is best remembered from season one.

It is the set for Cranesmuir, the village (and church) where plenty of early action takes place in the series. 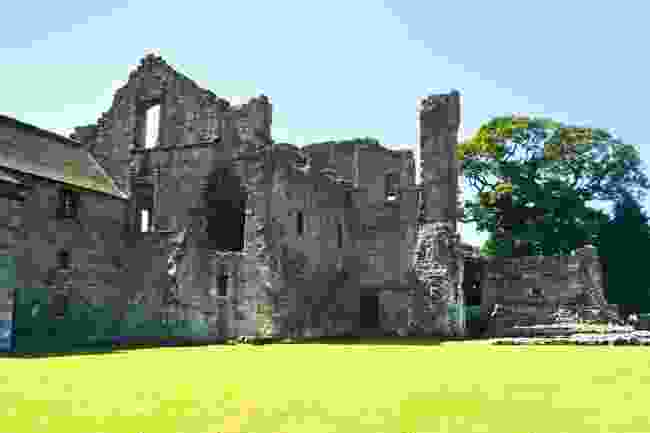 Aberdour Castle will look familiar as the monastery, Abbey of Ste. Anne de Beaupré, which appears in season one.

Despite its French name, the monastery is located in Scotland in the show.

Are you a fan? Got a recommendation? Tell us on Twitter. For more Outlander locations, head to Visit Scotland's Outlander map

Where Judi Dench went during her ITV Borneo adventure

BBC Two filmed The Planets in real locations - here's where

Where the environmental documentary BLUE was filmed